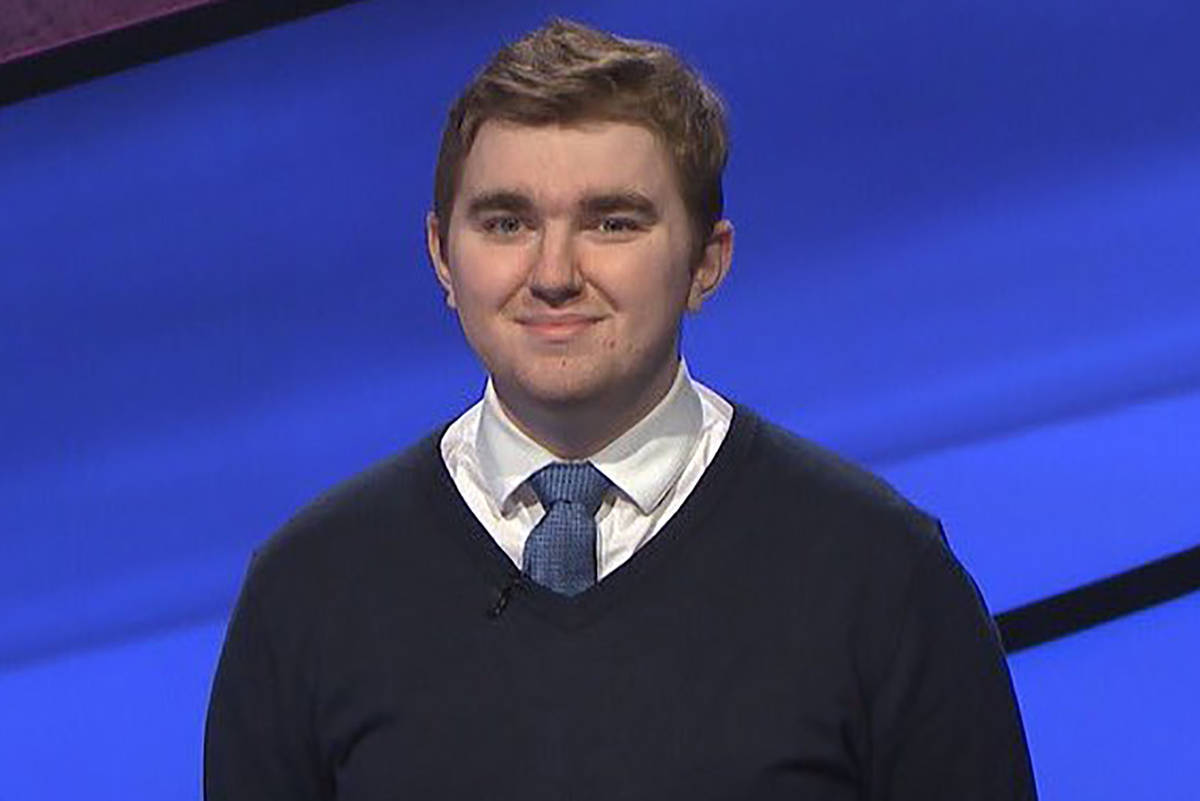 Las Vegas Valley resident and “Jeopardy!” game show champion Brayden Smith has died at 24, according to an online obituary from his family.

Smith was a graduate of UNLV and of Liberty High School in Henderson. He was a five-time champion on “Jeopardy!” and was one of the last contestants to appear on the show before the death of longtime host Alex Trebek in November.

His family, in an obituary posted online, said “Brayden attained a lifelong dream as a five-time champion” on Jeopardy!

“He was looking forward to competing in the show’s Tournament of Champions, the family said in the obituary.

Smith was hospitalized for days at a Southern Nevada hospital before his death on Feb. 5. A cause of death was not disclosed.

The game show issued a statement on Smith’s death Friday: “The JEOPARDY! family is heartbroken by the tragic loss of Brayden Smith. He was kind, funny and absolutely brilliant. Our deepest condolences go out to Brayden’s family. He will be missed.”

In a video interview of Smith posted by the show in January, Smith said he was grateful for his appearance.

“’Jeopardy!’ is so much better than anything that I could have even imagined,” said Smith, who earned $115,798 during his five wins. “Every moment since I was last on the studio live has been a moment that I’ve been wanting to get back on there.”

“I’m just glad we were able to do it, and I was glad that I was able to show what I was capable of,” Smith said. “Every moment I was there that I moved from the third lectern to the champion’s lectern, I wanted to stay there as long as possible.”

Of Trebek, Smith said, “Everybody knows that he (was) ailing. To put on a brave face and go out there every day and continue to give America and the world some good cheer, especially this year, is really a testament to how great of a person he was.”

“Jeopardy!” champion James Holzhauer and his wife, Melissa, told the Las Vegas Review-Journal in a statement: “He was a great Jeopardy! champion. A very inspiring player and a very bright, kind young man. He touched us with his kindness and we are very saddened by his loss.”

Smith’s obituary said he planned to attend law school and become an attorney for the federal government.

“He was a voracious reader and autodidact, a lover of knowledge and an advocate for justice,” the obituary said. “His room was bursting with books on political science, philosophy, economics and history. He recently served as an intern with the prestigious Cato Institute in Washington, D.C., where he researched criminal justice reform issues.”

Smith was born Sept. 6, 1996, in Henderson. His family said that while he was a student at Liberty, he was a National Merit Scholar semifinalist and captained his school’s Quiz Bowl team to back-to-back state runner-up finishes.