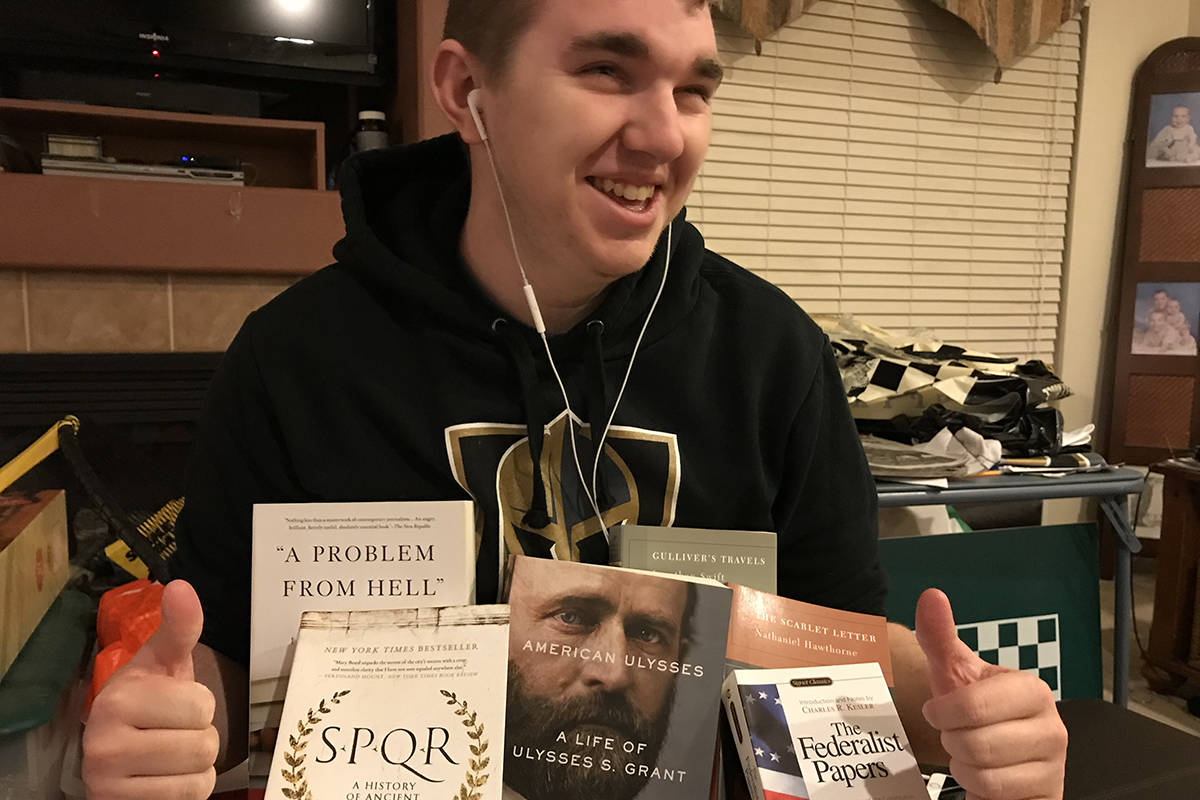 Brayden Smith, an avid reader, is pictured with some of his many books. (Scott and Debbie Smith) 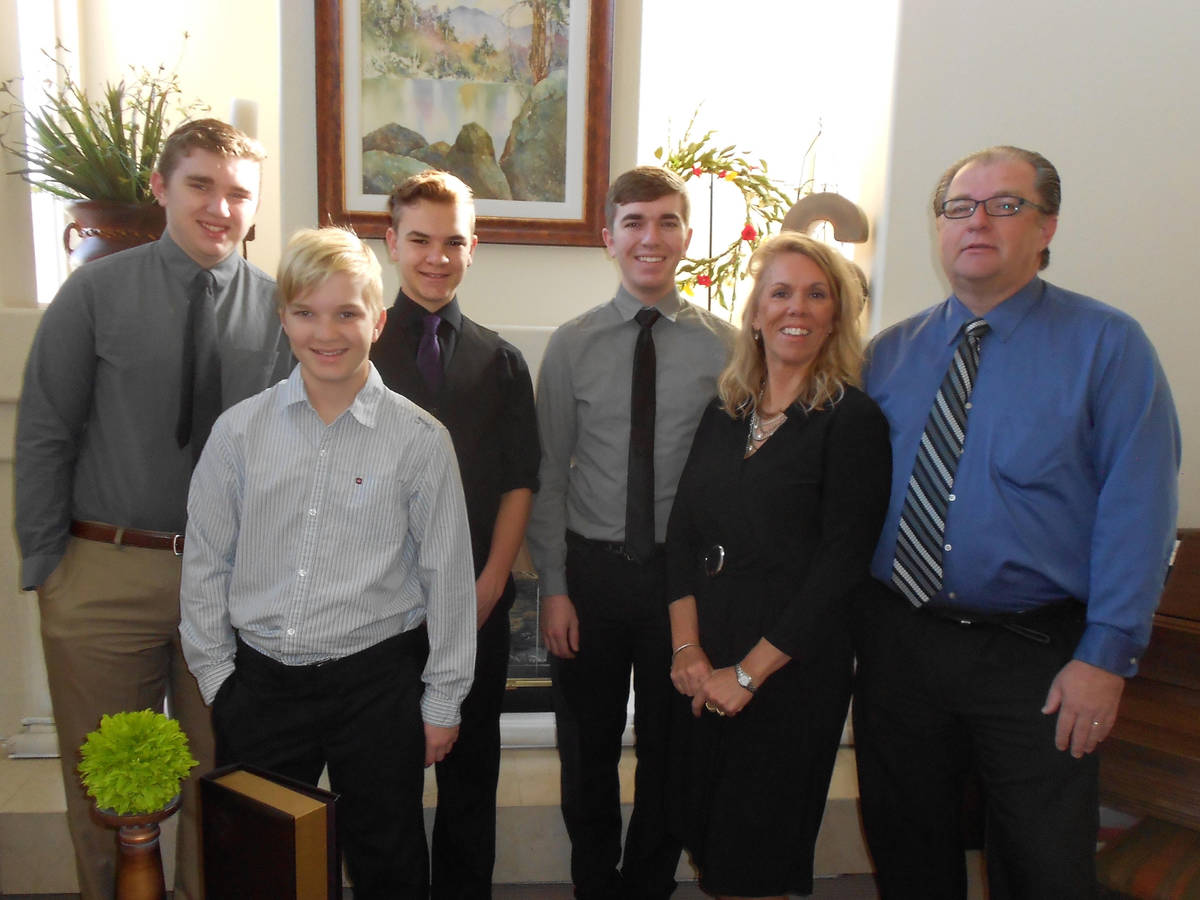 The Smith family, pictured from left to right, are Brayden, Brody, Brock, Bryce, Debbie and Scott. (Scott and Debbie Smith) 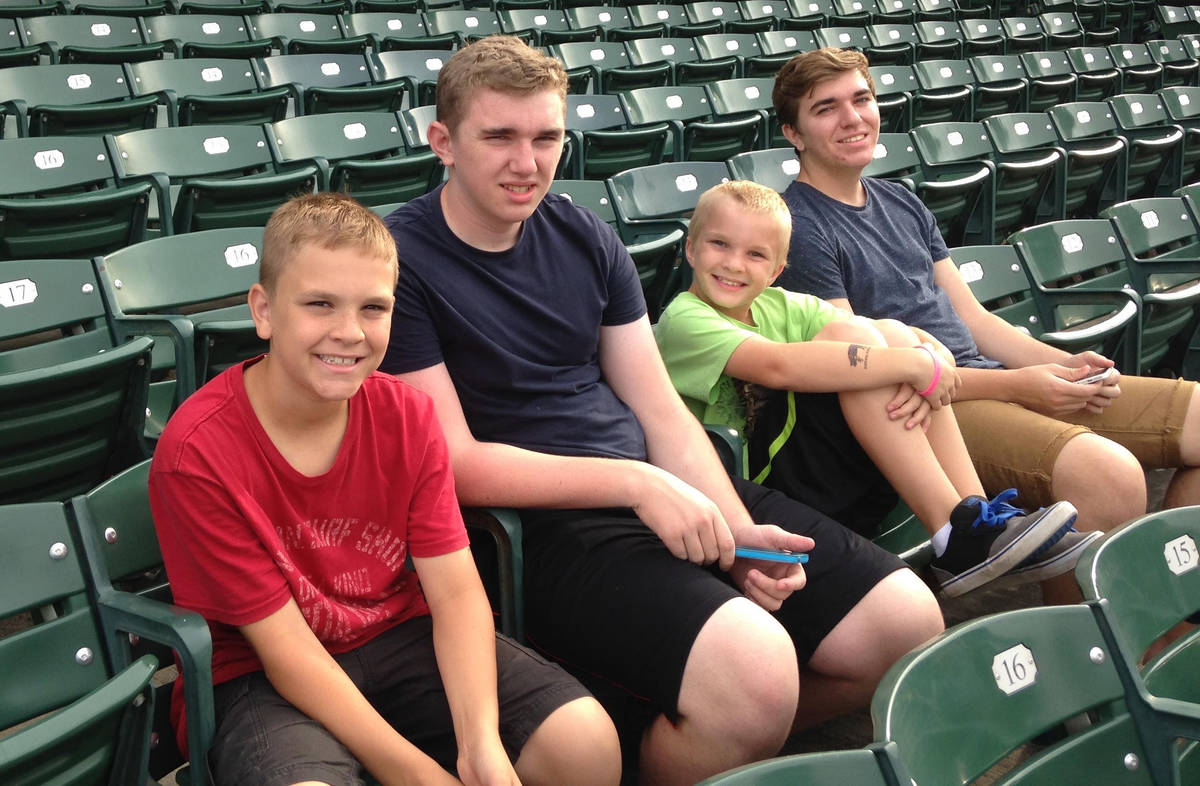 The Smith siblings from left to right are Brock, Brayden, Brody and Bryce. (Scott and Debbie Smith)

Las Vegans Scott and Debbie Smith recognized early on that their son Brayden was very smart.

“I would throw those little board books in his crib and he would memorize them and read them,” Debbie Smith, a retired Clark County teacher, said on Monday. “Pretty much was self-taught throughout his life.”

Last year, the Liberty High School and UNLV graduate used his intelligence to become a five-time “Jeopardy!” game show champion. He was also one of the show’s last guests to appear with host Alex Trebek, who died in November.

But on Feb. 5, Brayden Smith died from a medical episode following surgery in the Las Vegas Valley, his parents said. The 24-year-old’s death sparked an international outpouring of condolences from “Jeopardy!” fans, and the Smiths said Monday that they will honor their son’s memory by establishing the nonprofit Brayden Smith Memorial Fund to help pay for the education of aspiring Southern Nevada students who dream big like their son did.

“We wanted to do something special,” his mother said Monday.

Brayden Smith excelled in academics at both Liberty and UNLV. His parents said the loving son and brother was an avid reader, interested in a range of things such as political science, economics, philosophy and history.

“He just enjoyed learning for the sake of learning, and to know new things,” his father, a freelance writer, said.

In high school, the National Merit Scholar semifinalist captained his school’s Quiz Bowl team to back-to-back state runner-up finishes. He dreamed of one day competing on “Jeopardy!,” his mother said.

She drove him to Los Angeles to appear on the show last year. That day, five episodes were to be recorded, but the results of the episodes — and Brayden’s success on them — were largely kept secret even to his own family, Debbie Smith said.

When she picked her son up from the recording, she noticed he was in a different sweater.

“So I thought maybe he had won a game because he had changed his clothes,” his mother recalled. “Then he said, ‘I don’t want to have to tell you this, but I’m going to have to come back to L.A. in another week.’ That was exciting news.”

The Smiths ultimately watched their son steamroll his competition. He earned $115,798 during his five “Jeopardy!” wins.

“I’m just glad we were able to do it,” Brayden Smith would later say in a video interview posted by the show. “And I was glad that I was able to show what I was capable of. Every moment I was there, that I moved from the third lectern to the champion’s lectern — I wanted to stay there as long as possible.”

Of Trebek, who was 80 when he died last year from pancreatic cancer, Brayden Smith said, “Everybody knows that he (was) ailing. To put on a brave face and go out there every day and continue to give America and the world some good cheer, especially this year, is really a testament to how great of a person he was.”

Scott and Debbie Smith said they were especially proud of how their son conducted himself with grace on the show. It was one of the many highlights of his beautiful life, they said.

The Brayden Smith Memorial Fund will support students who share Smith’s passion for learning, his parents said. They have already received a large outpouring of donations from “all over the world,” Debbie Smith said.

“It has been nonstop. We just had no idea how far out Brayden’s run on ‘Jeopardy!’ went,” she said. “Small donations from as little as $2 up to high amounts.”

“The outpouring of love for Brayden is overwhelming,” Debbie Smith said on Twitter. “We can’t express how much your beautiful comments are comforting us during this painfully sad time. Thank you.”

The outpouring of love for Brayden is overwhelming. We can’t express how much your beautiful comments are comforting us during this painfully sad time. Thank you. ❤️

Donations to the memorial fund can be made online or by mail to the Brayden Smith Memorial Fund, CharitySmith Nonprofit Foundation, 13100 Filly Lane, Truckee, California, 96161.