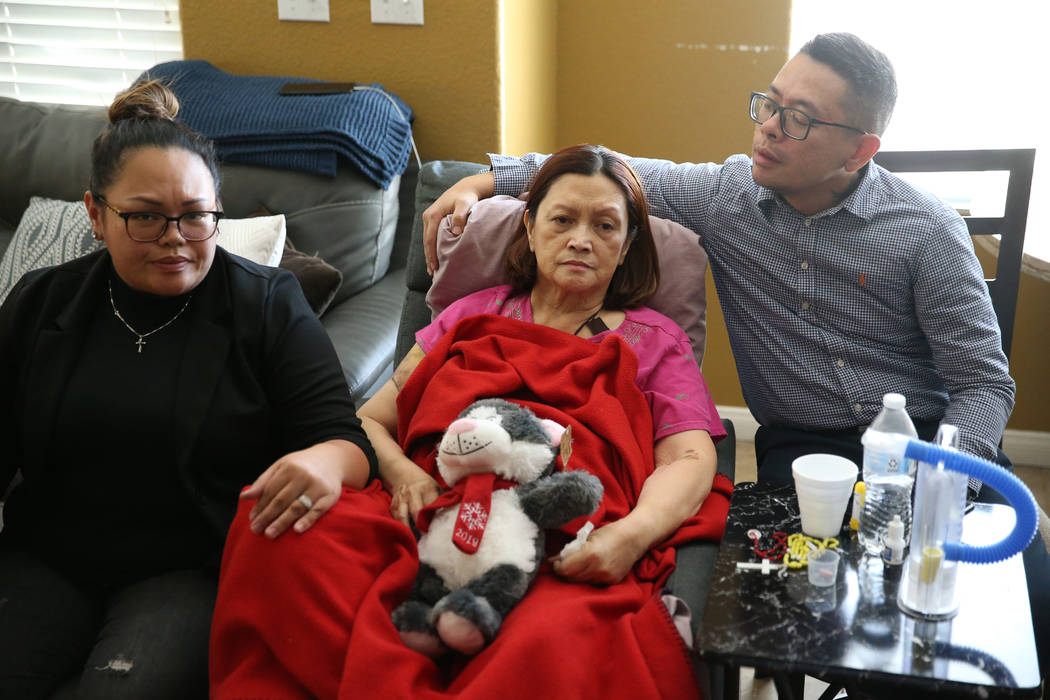 Nimfa Escobia, center, with her children, Misha, left, and Nimar Escobia, talk at their home in Las Vegas on Wednesday, Nov. 13, 2019, about the car crash that killed her husband and their father, Marcial Escobia, and injured her, on Oct. 27. (Erik Verduzco / Las Vegas Review-Journal) @Erik_Verduzco 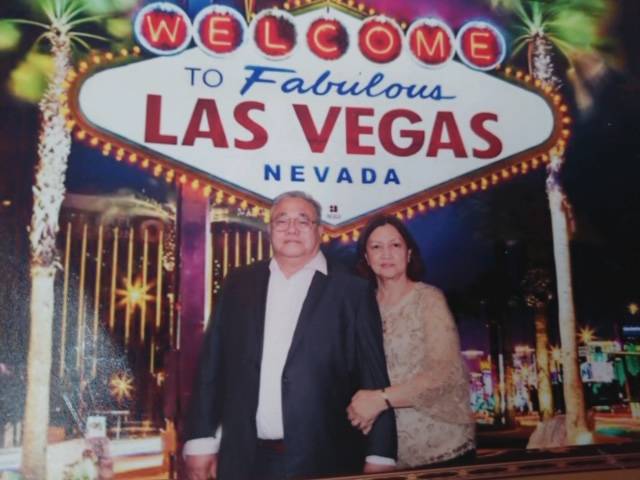 Marcial Escobia is pictured with his wife, Nimfa. Marcial Escobia was killed in an October crash that authorities say was caused by a drunken driver. (Escobia family) 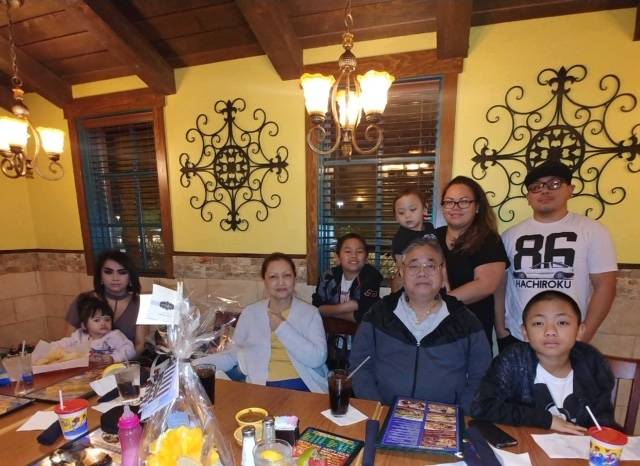 Marcial Escobia, center, is pictured with loved ones. (Escobia family) 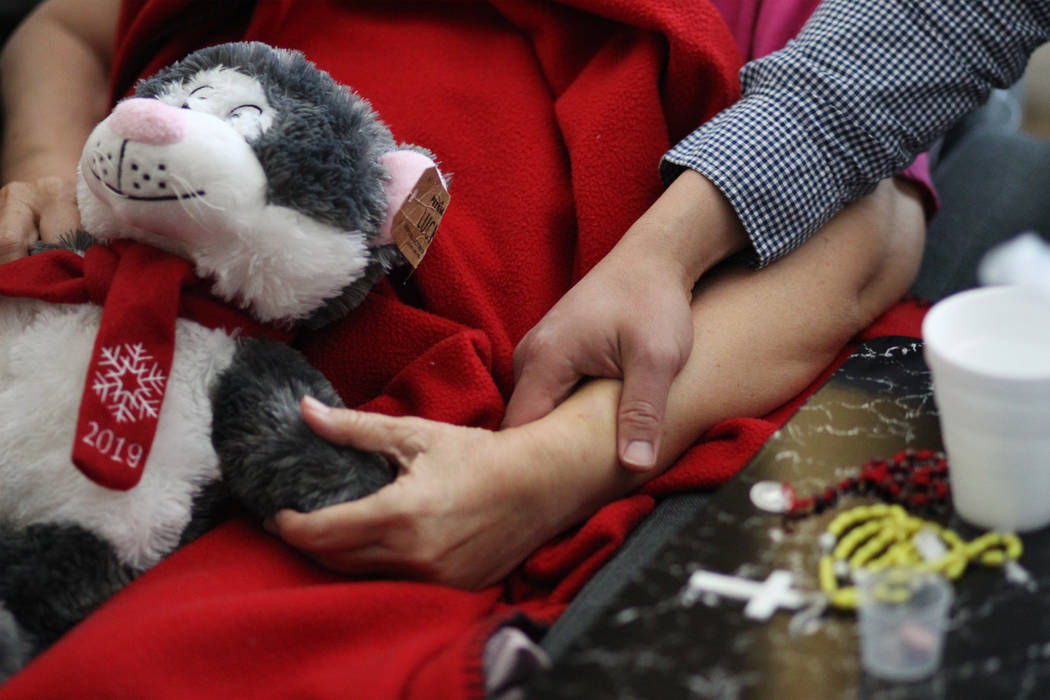 Nimfa Escobia, 67, left, holds hands with her son, Nimar, as they talk about a car crash that killed their father and husband, Marcial Escobia, and injure her, at their home in Las Vegas, Wednesday, Nov. 13, 2019. (Erik Verduzco / Las Vegas Review-Journal) @Erik_Verduzco 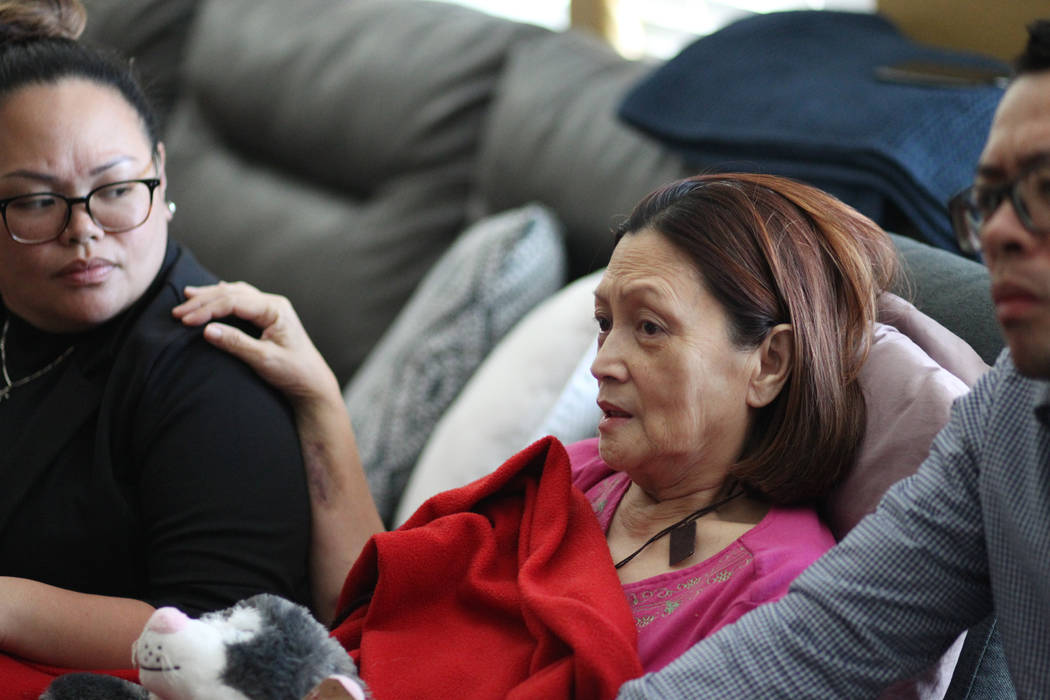 Misha Escobia, from left, with her mother, Nimfa, and brother, Nimar, talk about a car crash that killed their father and husband, Marcial Escobia, and injured her, at their home in Las Vegas, Wednesday, Nov. 13, 2019. (Erik Verduzco / Las Vegas Review-Journal) @Erik_Verduzco 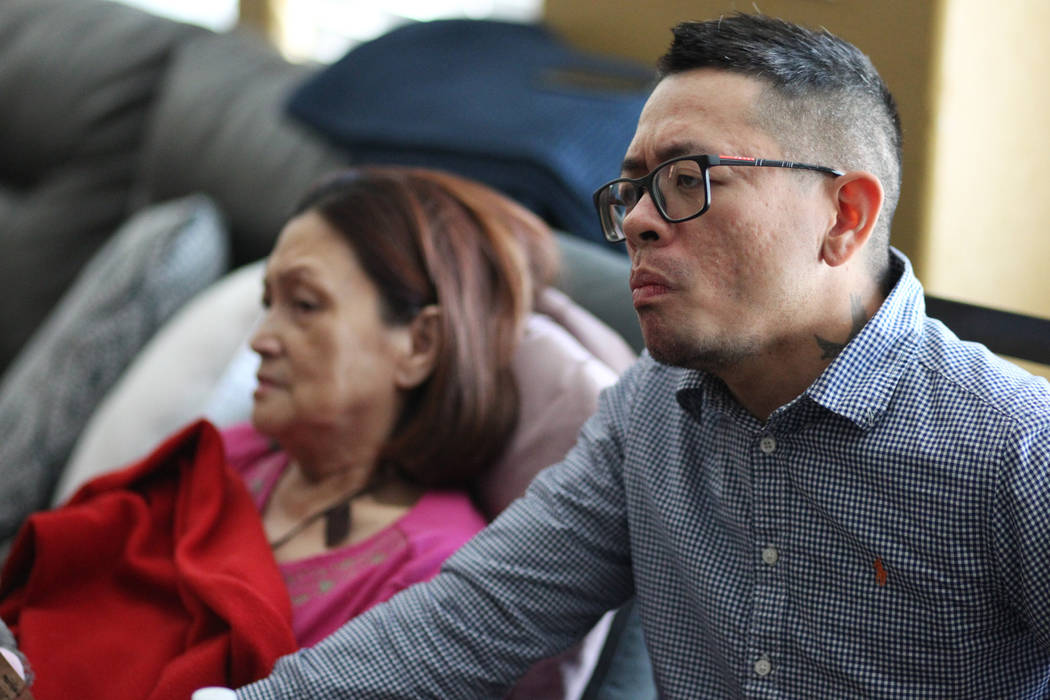 Nimfa Escobia, with her son, Nimar, talk about a car crash that killed their father and husband, Marcial Escobia, and injured her, at their home in Las Vegas, Wednesday, Nov. 13, 2019. (Erik Verduzco / Las Vegas Review-Journal) @Erik_Verduzco 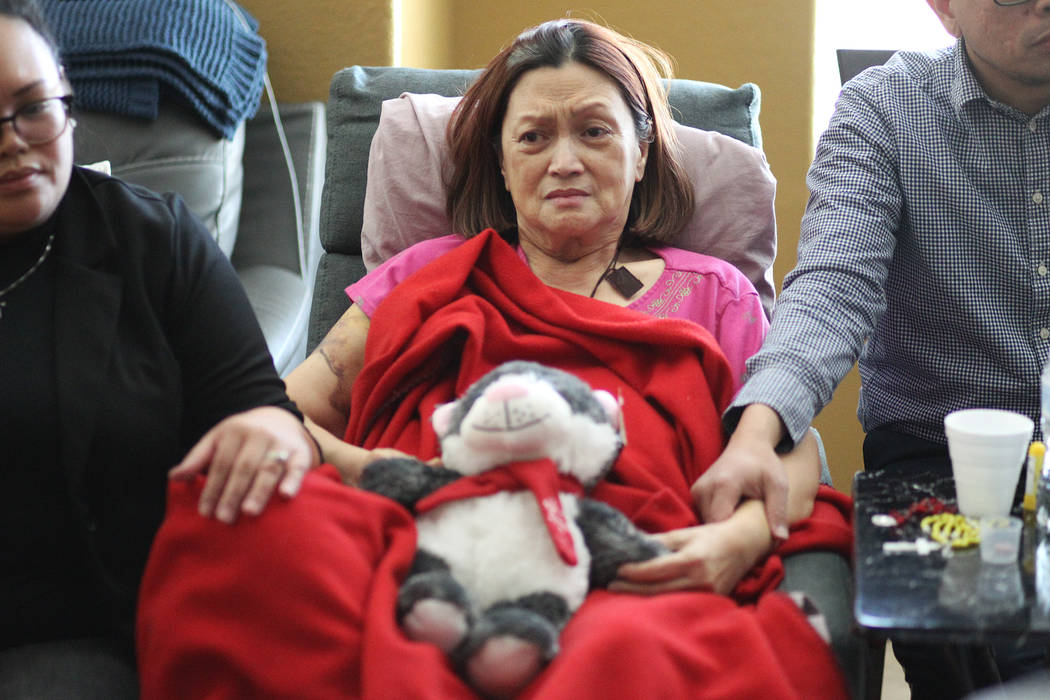 Nimfa Escobia, 67, talks about a car crash that injured her and killed her husband, Marcial Escobia, at her home in Las Vegas, Wednesday, Nov. 13, 2019. (Erik Verduzco / Las Vegas Review-Journal) @Erik_Verduzco 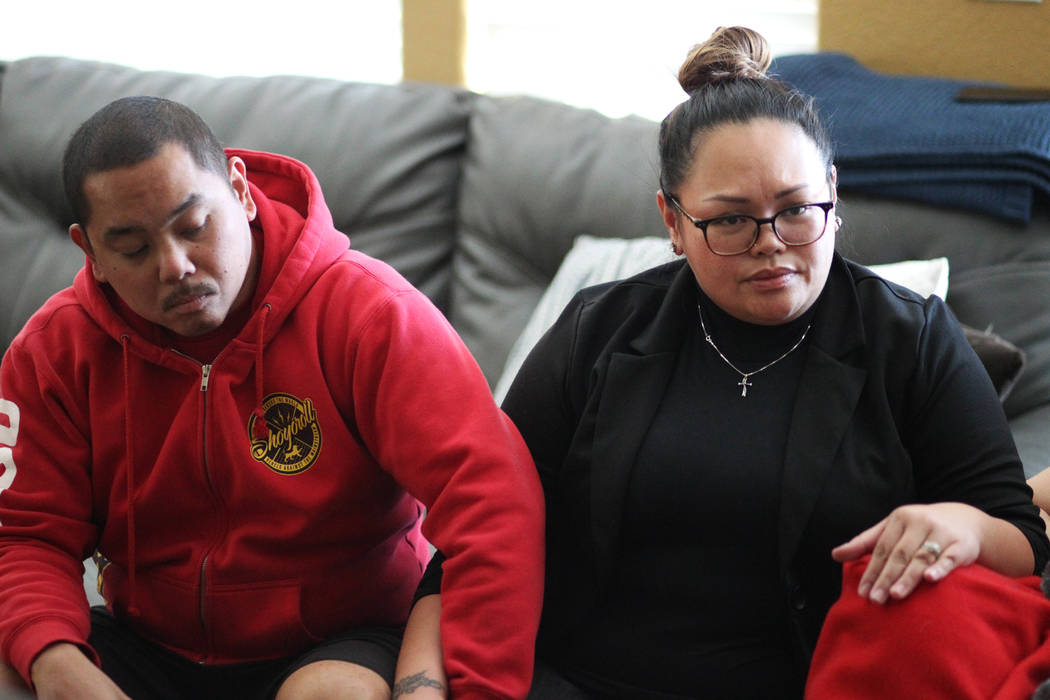 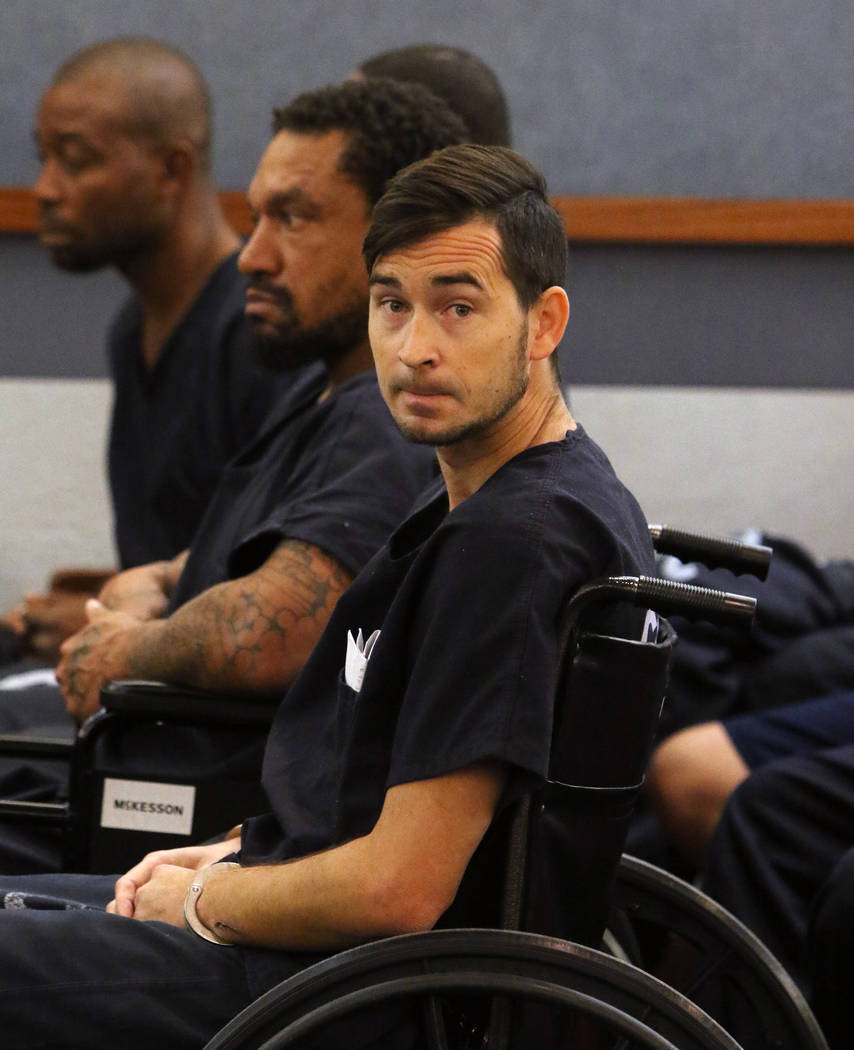 Nimfa Escobia was in the passenger seat of the family’s 2013 Toyota Pathfinder as her husband, Marcial, pulled out of the driveway of their Las Vegas home and set off for Sunday services at a church in California. As was her habit when traveling, Nimfa was clutching her rosary and praying for safe travels when her world exploded.

The next thing she remembers is being surrounded by people.

Police say Marcial Escobia, 65, died the morning of Oct. 27, when a drunken driver ran a red light at Tropicana Avenue and Rainbow Boulevard in Las Vegas and slammed into the Escobias’ car, and five other vehicles, at high speed.

Marcial Escobia’s family said the crash took the life of a deeply religious man who lived to give to others.

As a surgeon in his native Philippines, he worked long days at a hospital and then would open his home after hours to care for those who couldn’t afford treatment. He came to the United States in 1994 on a work visa and built a successful life for his family working as a registered nurse in the Las Vegas Valley. His family said he was a nurse because his goal was to help others.

“He loved God, and he wanted to instill that belief in us since we were very small,” Escobia’s daughter, Misha Escobia, said.

Going to church was important to Escobia and his wife. On the morning of the crash they were on their usual hour-long Sunday drive to St. Therese Mission in Tecopa, California.

“He served there, and it was more like a restoration,” his son, Nimar Escobia, 35, said. “Very nice. Looks like the land of Jesus. So he’s been traveling the miles to serve others.”

Nimfa Escobia said that on the morning of the crash she offered to drive but her husband said he would do it.

“He said, ‘I’m OK,’ so I told him, ‘Concentrate on your driving and I’ll be praying,’” Nimfa Escobia said.

Clark County District Attorney Steven Wolfson said the person accused of causing the crash, 35-year-old Kevin Raspperry of Henderson, is a repeat drunken driver with two prior DUI convictions. Authorities allege that at the time of the crash Raspperry had a blood-alcohol content of 0.20 percent, nearly two and half times the legal limit. They also contend Raspperry had methamphetamine, ecstasy and marijuana in his system.

Wolfson said Raspperry was driving his vehicle 85 mph on Tropicana when he struck the Escobias’ vehicle, killing Marcial Escobia and seriously injuring his wife.

“Five fractured ribs, my left side is hurting,” Nimfa Escobia said this week. “I can hardly walk. It’s hurting.

“I don’t know why he killed my husband,” she added. “He took the most important person in my life. Why he did it?”

Wolfson’s office on Wednesday authorized the filing of a second-degree murder charge against Raspperry. Wolfson said the recklessness of the motorist’s actions warrant the charge. Defense attorneys say charging a drunken driving suspect with murder will not hold up in court because an already existing statute dictates the charge that applies is driving under the influence resulting in death. Raspperry’s attorney, Craig Mueller, said he believes the murder charge will eventually be dismissed.

The Escobia family is grief-stricken. They said they are struggling to get through every single day, and they want something good to come from their devastating loss. They hope valley residents will do everything possible to combat driving under the influence.

“Taxi. Uber. Sober friends,” said Jordan Basa-Franco, 36, the husband of Misha Escobia. “It is so easy to pick up a phone. Or if a bartender sees someone intoxicated, get them a ride. Just don’t let them go.”

Misha Escobia said the community needs to come together to stop drunken driving.

“As a community we need to stand up against this,” she said. “It is out of control.”

“My dad spent 80 percent of his life serving others,” Nimar Escobia said. “The guy who (killed) our dad, it is time for him to get the right service from our justice system.”