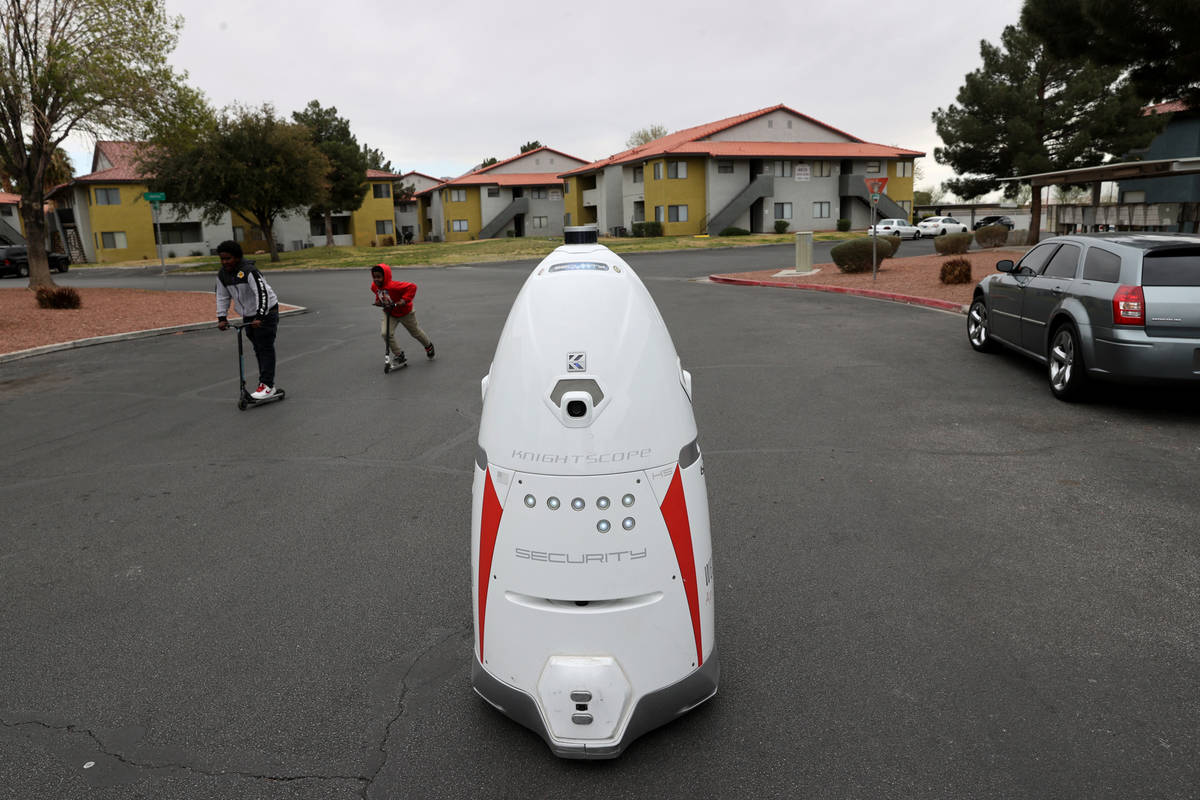 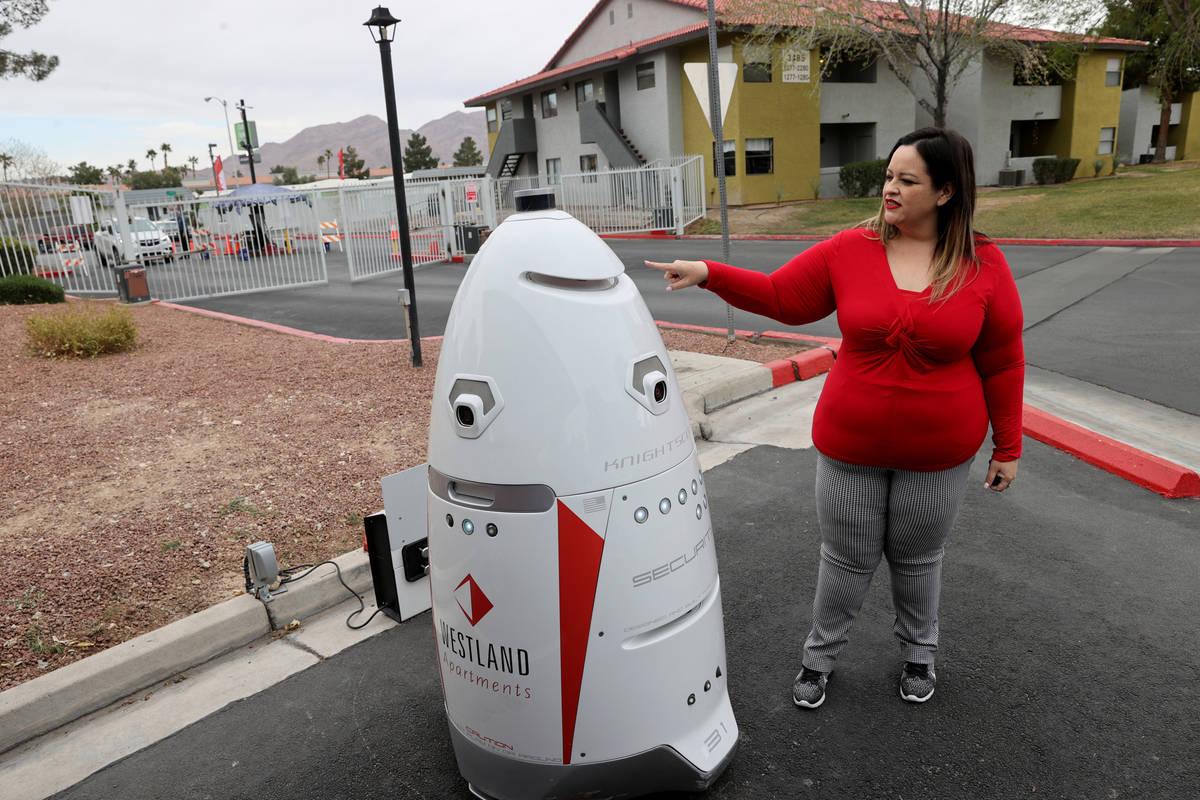 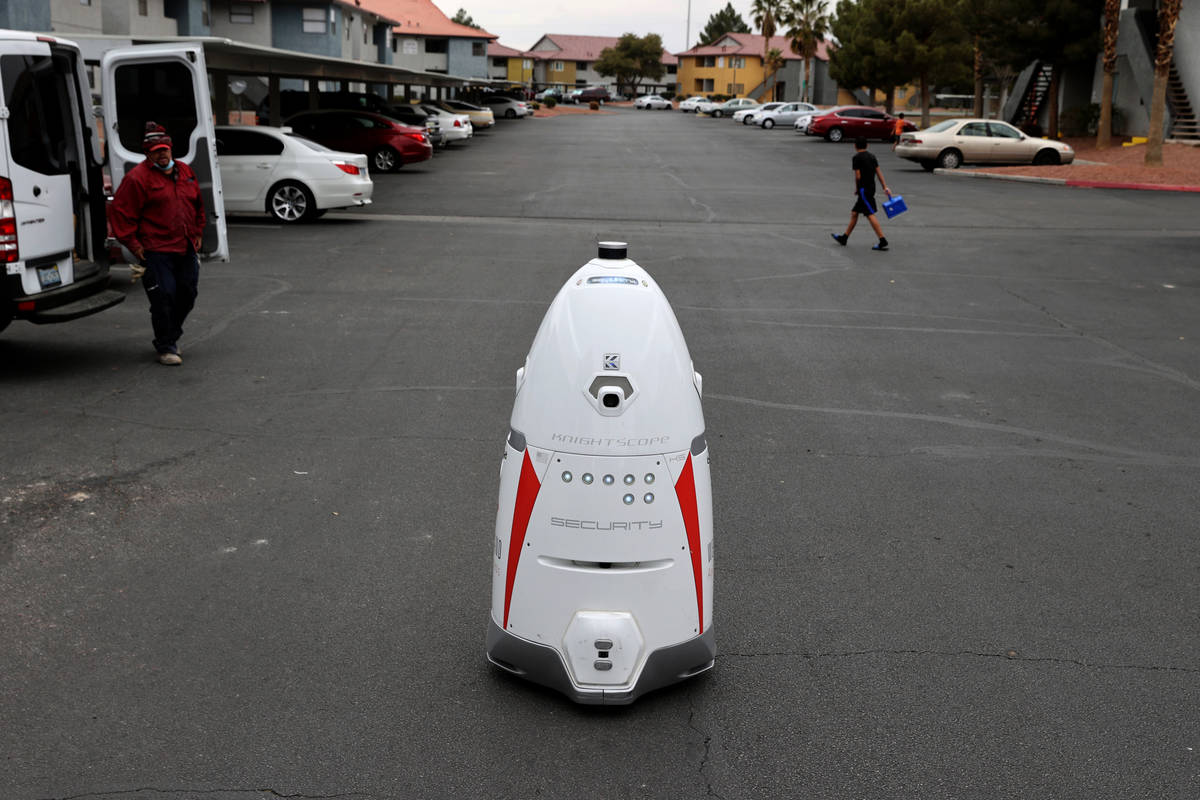 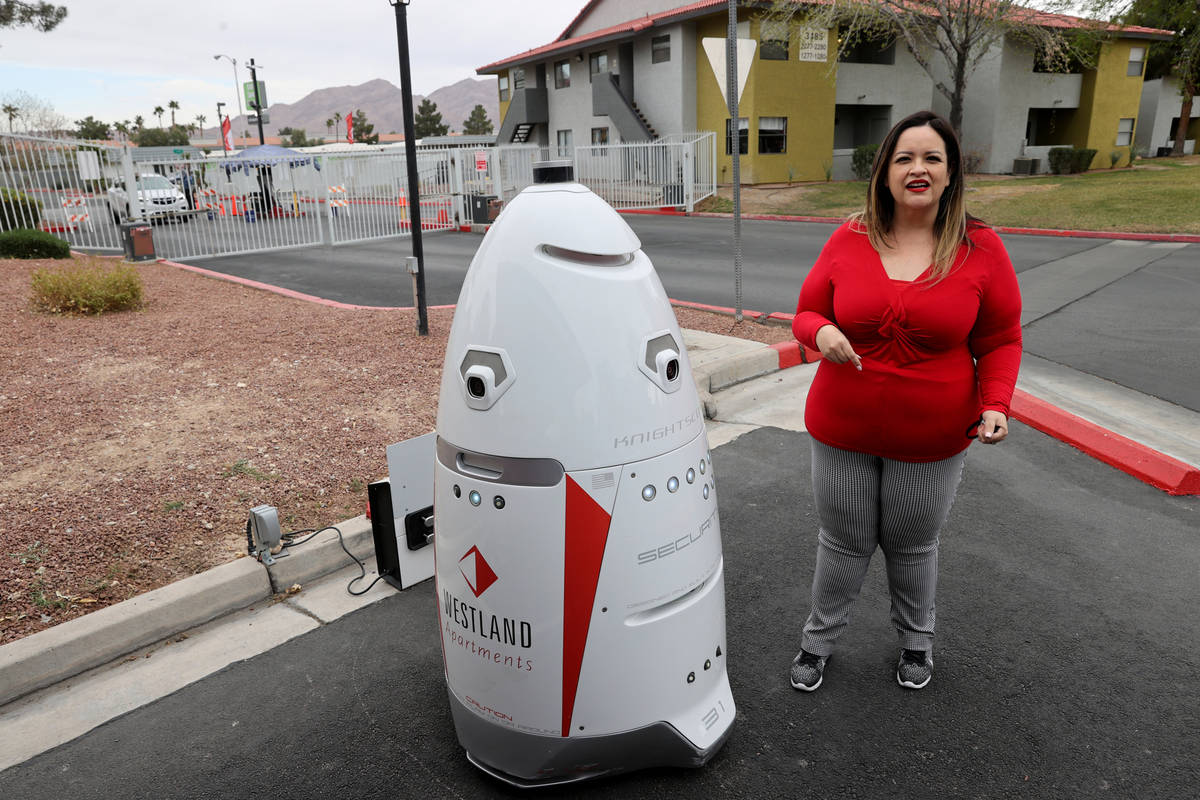 How would you like a robot warning you that you are violating a curfew regulation?

A security robot is helping to transform a noisy northeast Las Vegas Valley apartment complex into a quieter, more peaceful place to live, says a manager.

“Westy” has been patrolling the grounds at the 1,129-unit Liberty Village apartment complex, just outside the southwest corner of Nellis Air Force Base, since October. It is believed to be the first such use of a security robot at a Las Vegas apartment complex.

“It’s been very useful in several ways,” said complex manager Carmen Batiz. “It can advise people when they are out past the 10 p.m. curfew and the four video cameras tend to make people avoid it. When we have vandalism reports we can go through the video and get a time frame of when it happened. It has a button so people can get human help quick in an emergency.

“People don’t want to get caught on the cameras so they will avoid it,” Batiz said.

The robot is usually docked in its charging station when vehicular traffic is high during rush hour, but otherwise it patrols the roughly 9 acres at Liberty Village.

The complex used to routinely rank among the top three northeast Las Vegas apartment complexes for 911 calls, “but now they say we’re not even in the top 10,” Batiz said. “It has deterred a lot of crime and vandalism.”

Officer Aden OcampoGomez of the Las Vegas Metropolitan Police Department said Liberty Village was in the top three for 911 calls for apartment complexes in the northeast part of the valley, but has fallen out of the top 10.

The robot’s success could be duplicated in other Las Vegas complexes owned by California-based Westland Apartments, Batiz said.

“We have eight other properties and we’re definitely going to bring on more robots and even the Wynn had people come check it out,” Batiz said.

And, it communicates in English and Spanish.

A six-month test in 2019 with a similar robot by the Huntington Park (Calif.) Police Department at a community park resulted in a 10% reduction in calls for service, a 46% reduction in crime reports, a 27% increase in arrests and a 68% reduction in citations over the same six months in 2018.

“I am simply elated that Knightscope was able to assist the City of Huntington Park and its citizens to enjoy greater peace of mind when visiting Salt Lake Park,” said William Santana Li, chairman and chief executive officer, Knightscope, Inc. “Our long-term vision is to make the United States of America the safest country on the planet, and this is a meaningful step in the right direction.”