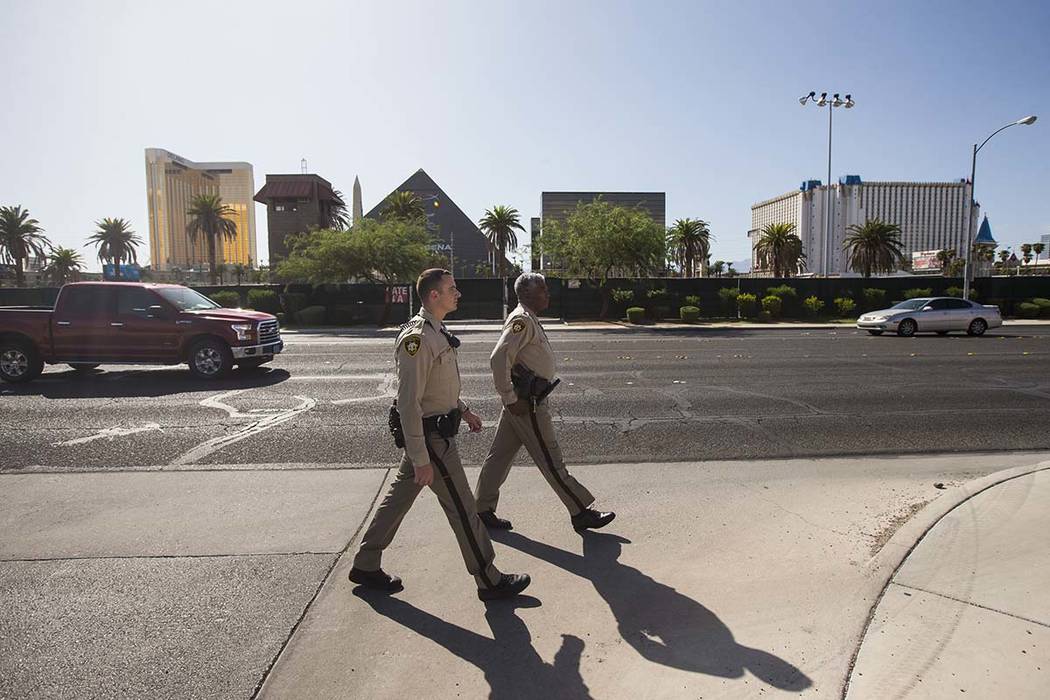 The Review-Journal’s five-part podcast series, “Critical Condition: Accounts from One October,” is available now in its entirety wherever you listen to podcasts including Apple, Spotify, Google Play and other platforms.

Read the Review-Journal story that inspired the series.

Listen to each part of the series below:

In the back of the Las Vegas Metropolitan Police Department SUV, Route 91 Harvest festival attendee Frank Calzadillas pleads with his wife, Jovanna, whose brain has been pierced by a bullet, to “breathe, baby!”

He implores Metro officer Richard Cole, who is going over 100 mph on northbound Interstate 15, to drive even faster.

Rookie officer Brandon Engstrom, Cole’s field trainee, is in the passenger seat, about 20 minutes into a graveyard shift on his second day on the job. His mind races. What just happened? Is the threat over?

In a flurry of radio dispatches — with automatic gunfire often ringing in the background — Metro officials provide evolving intelligence about a scene just east of the Las Vegas Strip: Multiple people have died, and at least one shooter appears to loom high in Mandalay Bay.

Part 2: Trouble on the Mind

Jovanna Calzadillas was one of the first patients brought to University Medial Center that night.

Something new also was troubling Cole: His roommate, Anna Childs, was among the 22,000 people at the festival. In a rush to arrive at the shooting, he had left his cellphone in a bag at his substation. And he didn’t know her phone number by heart.

“Now I’m kind of going into panic mode. I had just seen somebody who had been shot in the head,” he said. “I’d seen a lot of people shot, and my train of thought is, you know, one of my best friends could be dead right now.”

George Gafford, a peer counselor for the Metro’s Police Employee Assistance Program, was told to go to the South Central Area Command, where he meets Cole and lends the weary officer his cellphone.

“Oh, my God, Anna. Thank God,” he can be heard saying in footage from his body camera. “I’ve been so (expletive) worried about you.”

Part 4: All Hands on Deck

University Medical Center is located in the city’s Medical District, just west of downtown, and boasts one of the few standalone trauma centers in the U.S.

“When the call first came out, I don’t think anybody knew exactly how severe this was going to be,” said Dr. Paul Chestovich, UMC’s chief of trauma research.

About 40 victims entered UMC within a half-hour of the shooting, most by private vehicle, according to Chestovich and fellow trauma surgeon Dr. Syed Saquib.

More than 100 would arrive by the time their shift was over.

Frank and Jovanna Calzadillas appeared before reporters on January 2018, shortly before her discharge from the Barrow Neurological Institute in Phoenix, amid a recovery one doctor there called “nothing short of miraculous.” She offered a smile and a peace sign to the crowd.

After leaving the substation on Oct. 1, Gafford was told to set up a victims center at Metro headquarters. He was tasked with briefing frantic families with as much information as he knew. Cole and Engstrom escorted fire protection and emergency medical teams through the fairgrounds, sweeping for survivors.

“In the worst of times, as corny as this might sound, I saw the best of America,” Gafford said. “I truly saw the very best of us that night. And I will never forget that.”