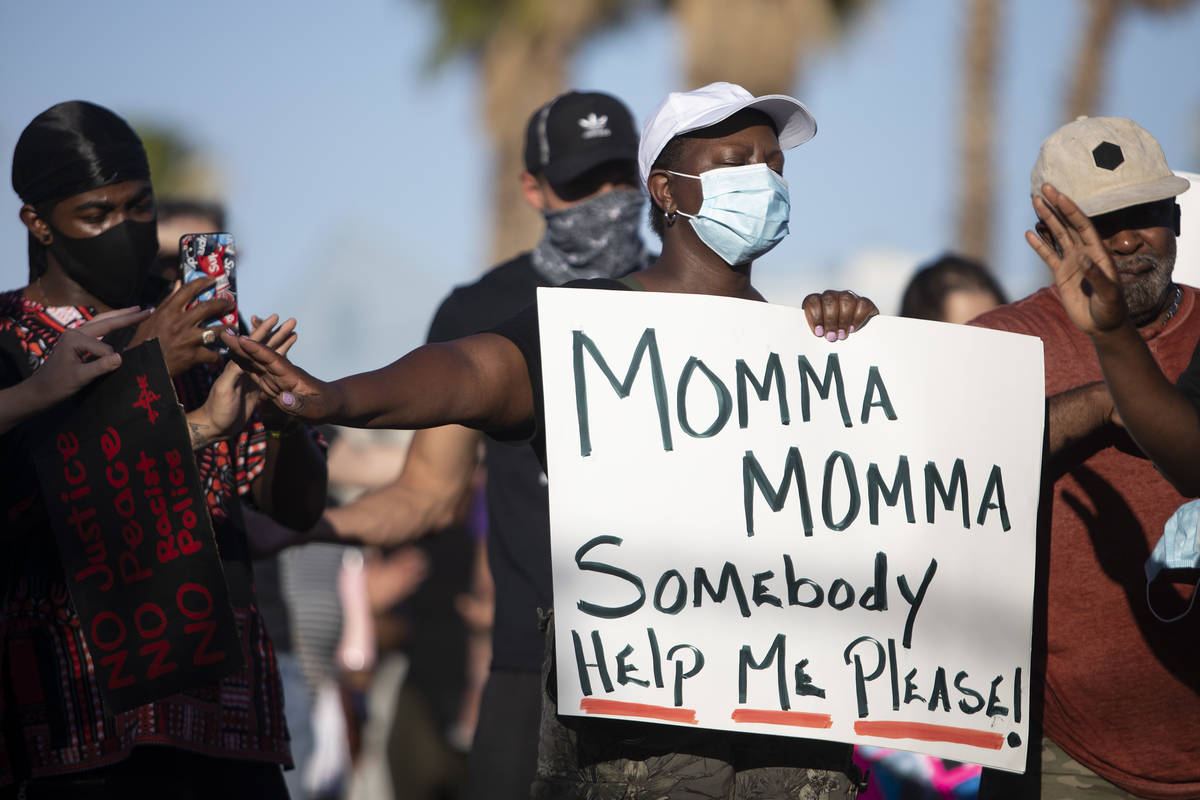 Mary Gibbs, center, participates in a touch-free prayer at a protest against police brutality outside Molasky Family Park on Sunday, June 14, 2020 in Las Vegas. It's Gibbs' first protest this year, and she said it was "like heaven" to her. (Ellen Schmidt/Las Vegas Review-Journal) @ellenkschmidttt 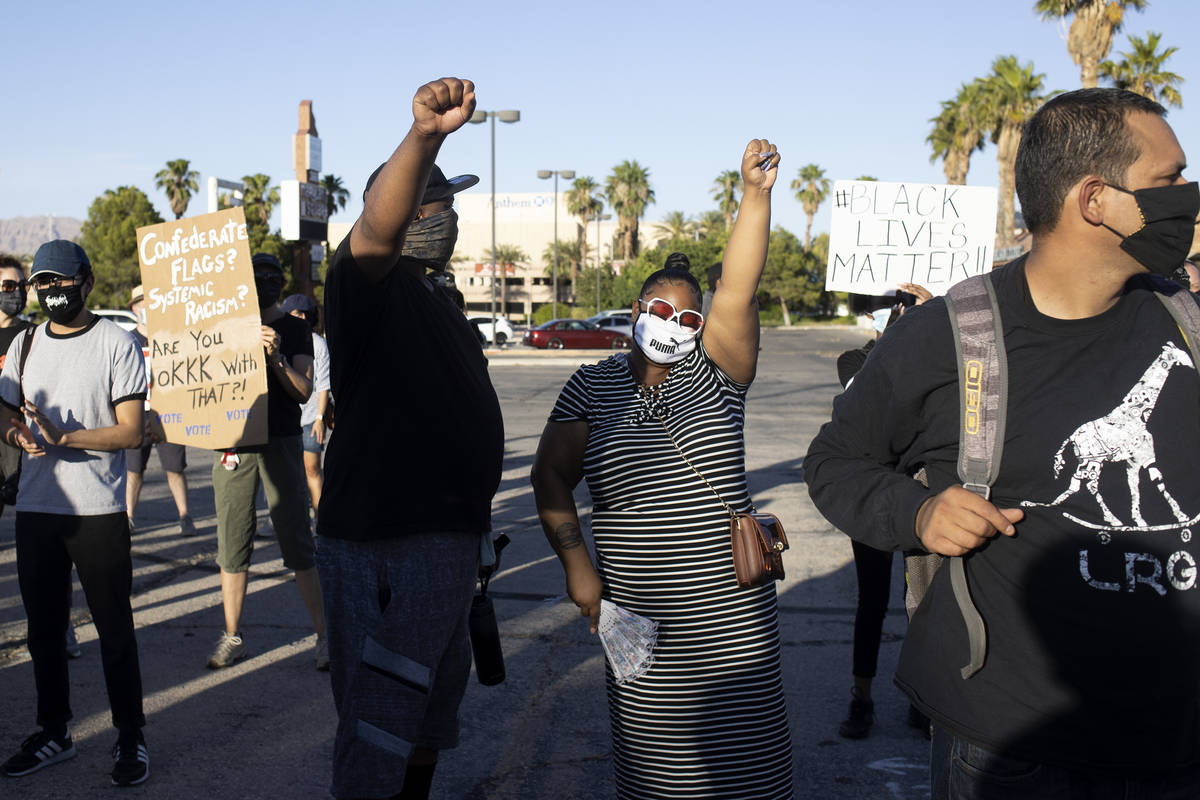 Married couple Kevin Johnson, left, and Angel Johnson, right, both born and raised Las Vegans, attend the protest against police brutality near Molasky Family Park on Sunday, June 14, 2020 in Las Vegas. The two said they've been to almost every protest to support the cause. (Ellen Schmidt/Las Vegas Review-Journal) @ellenkschmidttt 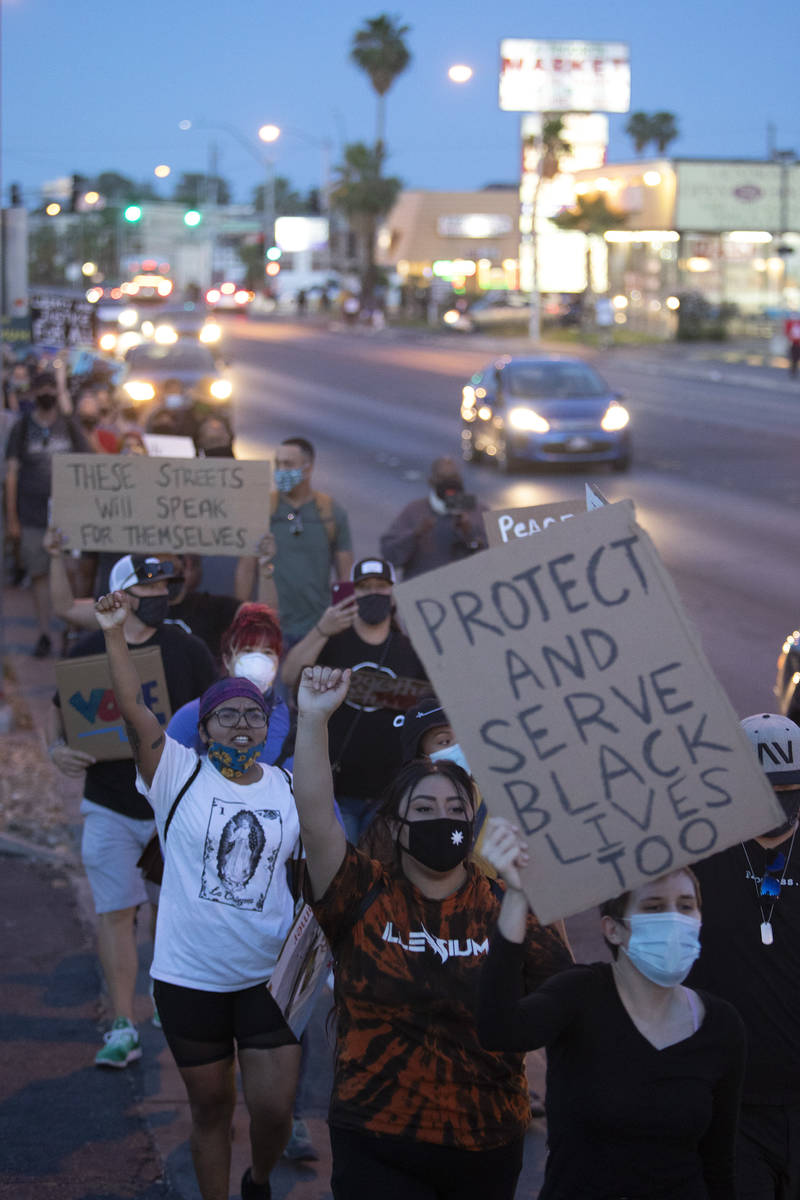 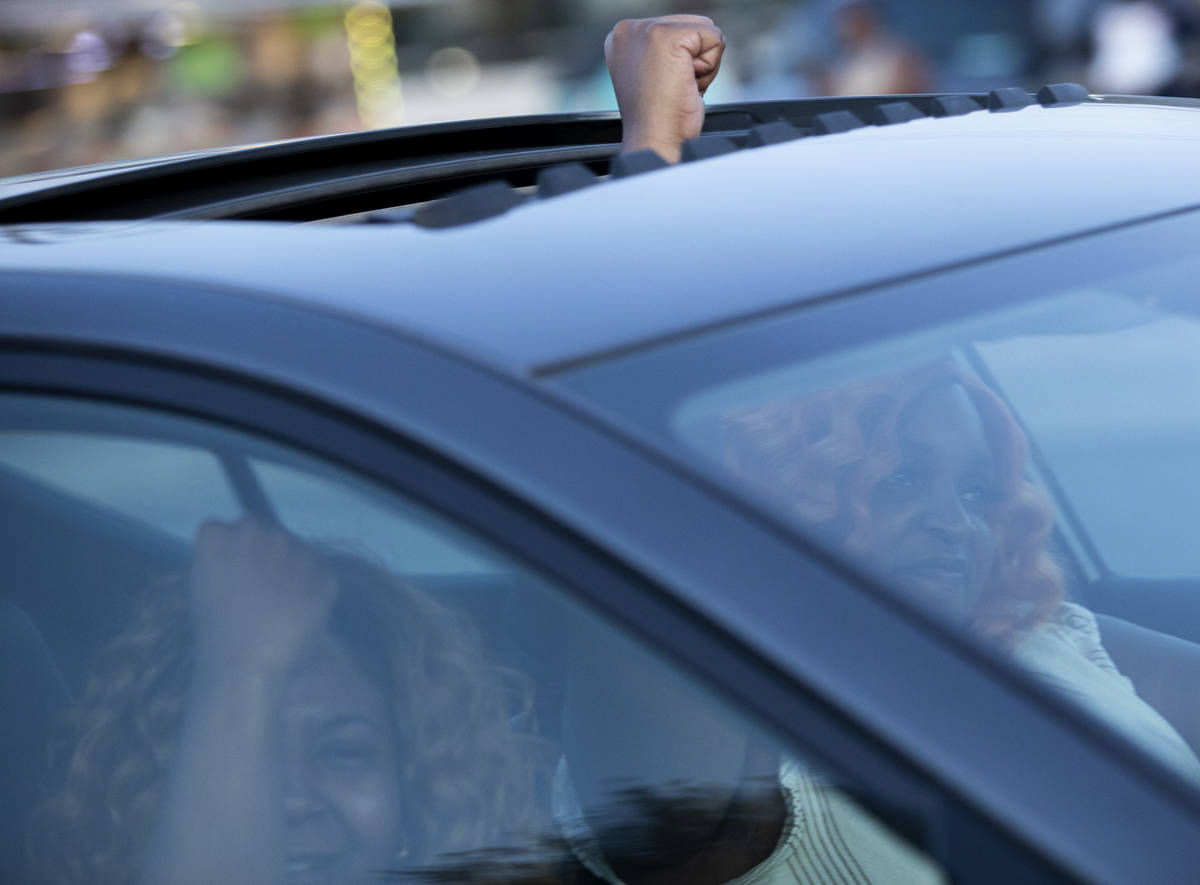 A vehicle cheers as it passes a protest against police brutality that marched from Molasky Family Park to the Las Vegas Convention Center on Sunday, June 14, 2020 in Las Vegas. (Ellen Schmidt/Las Vegas Review-Journal) @ellenkschmidttt 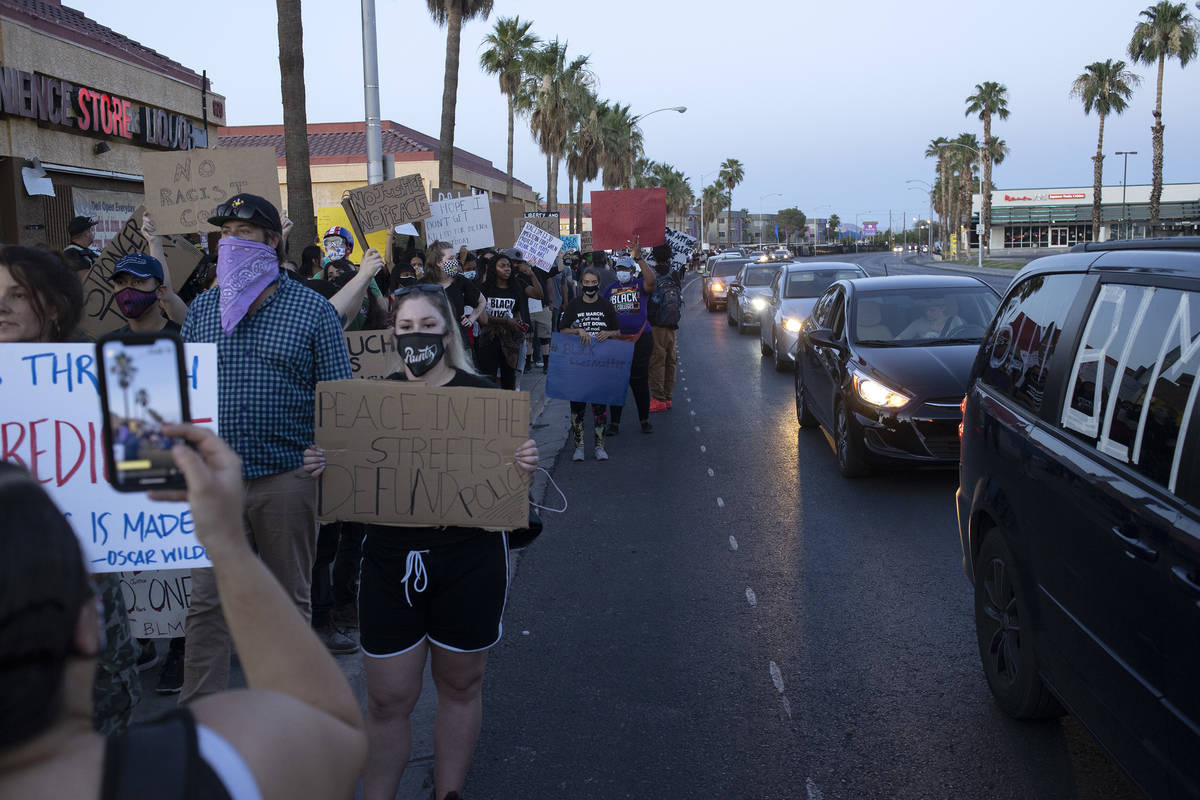 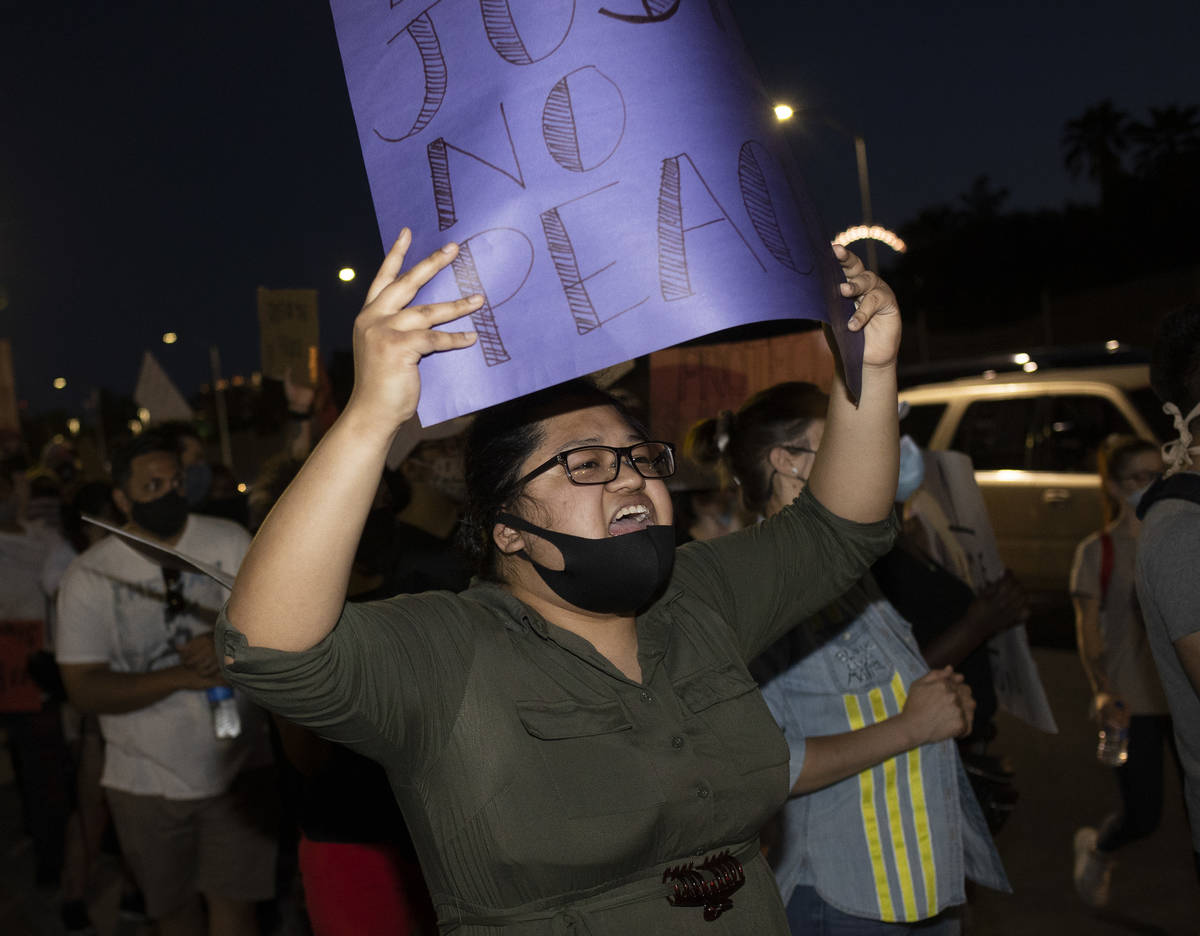 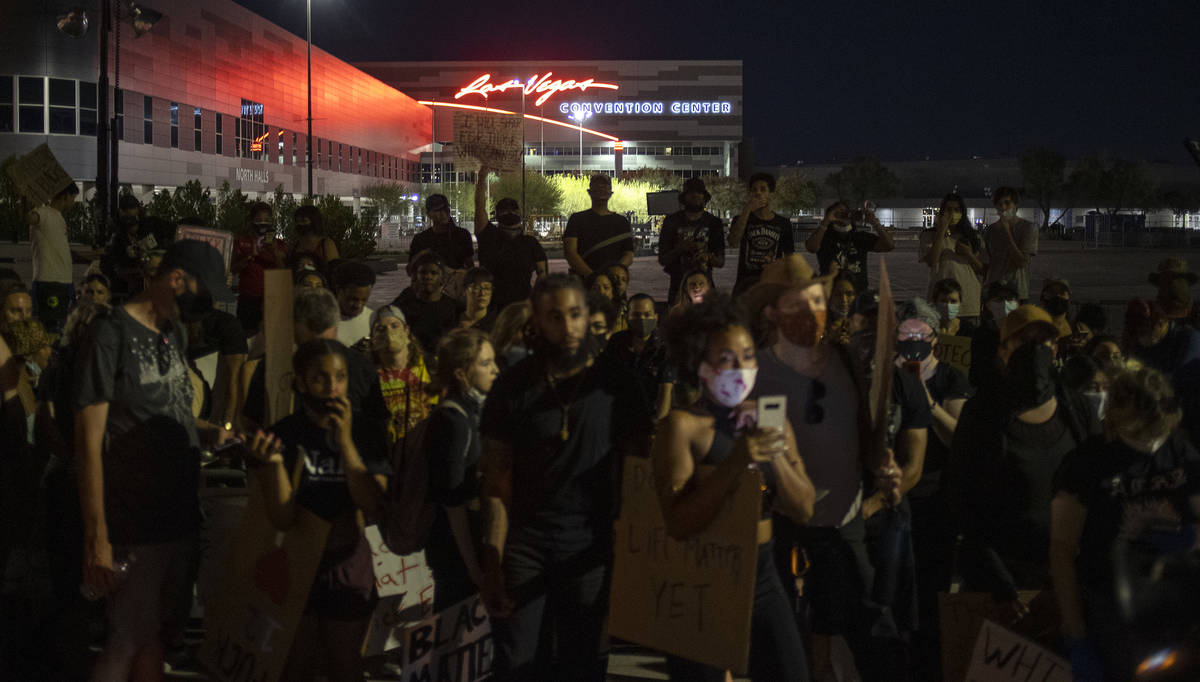 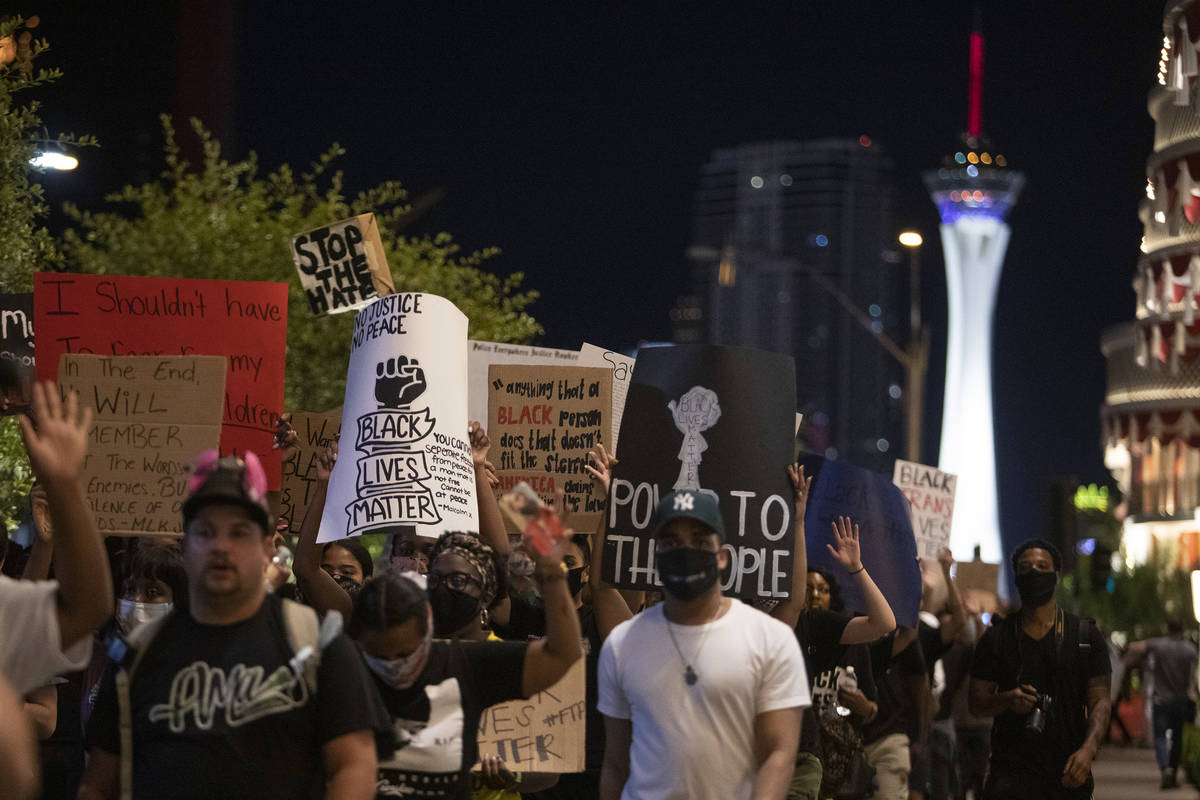 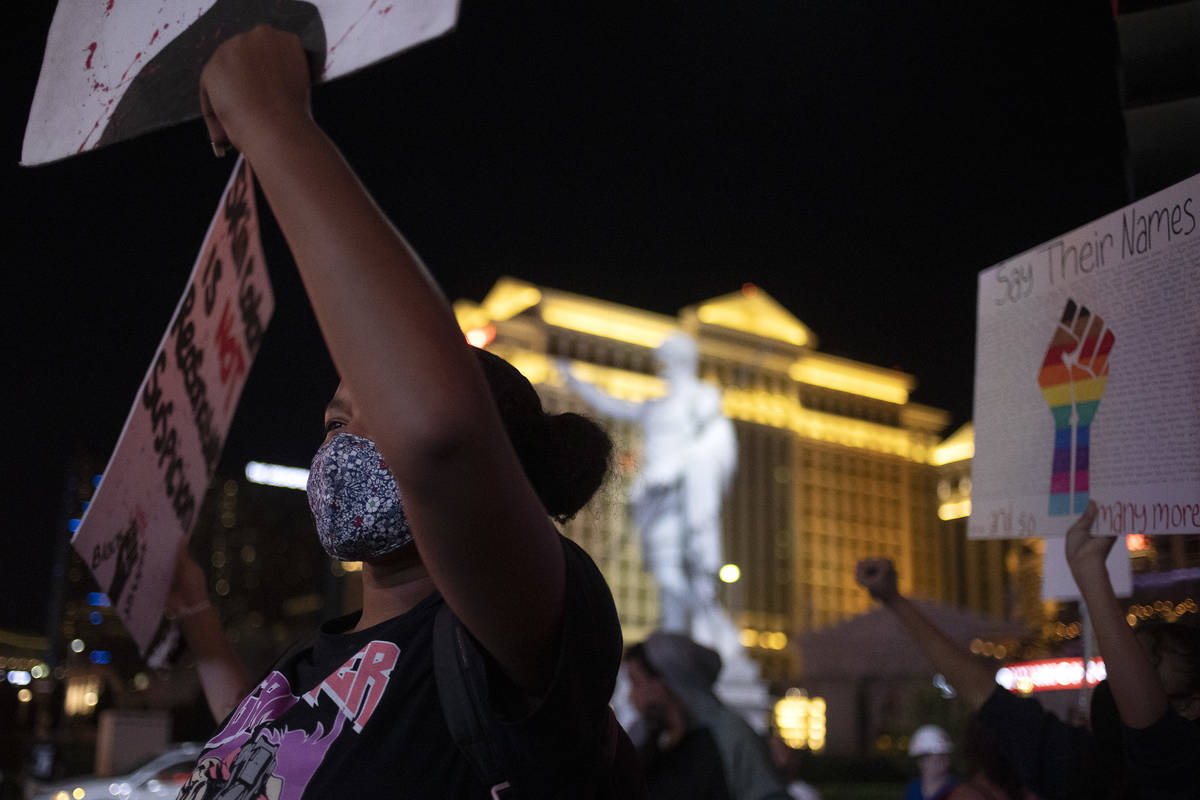 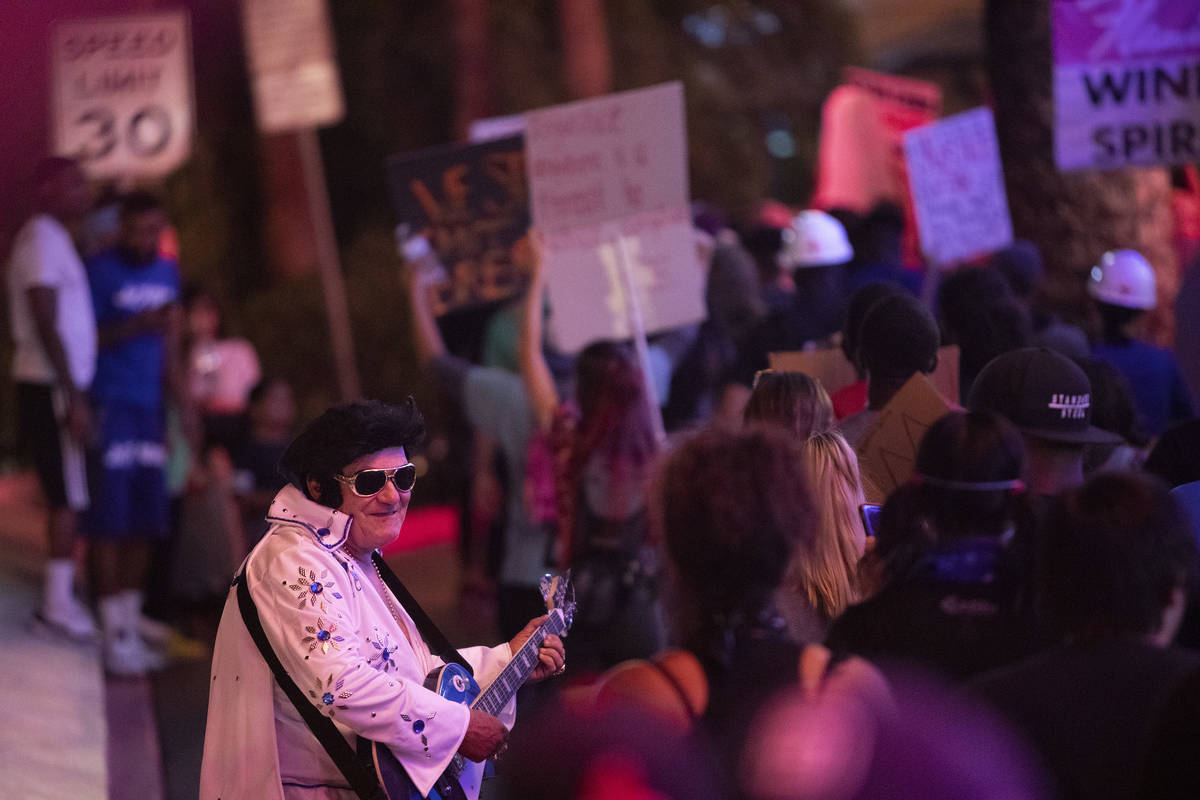 An Elvis impersonator interacts with protesters as they pass by during a protest against police brutality on Sunday, June 14, 2020 on the Las Vegas Strip. (Ellen Schmidt/Las Vegas Review-Journal) @ellenkschmidttt 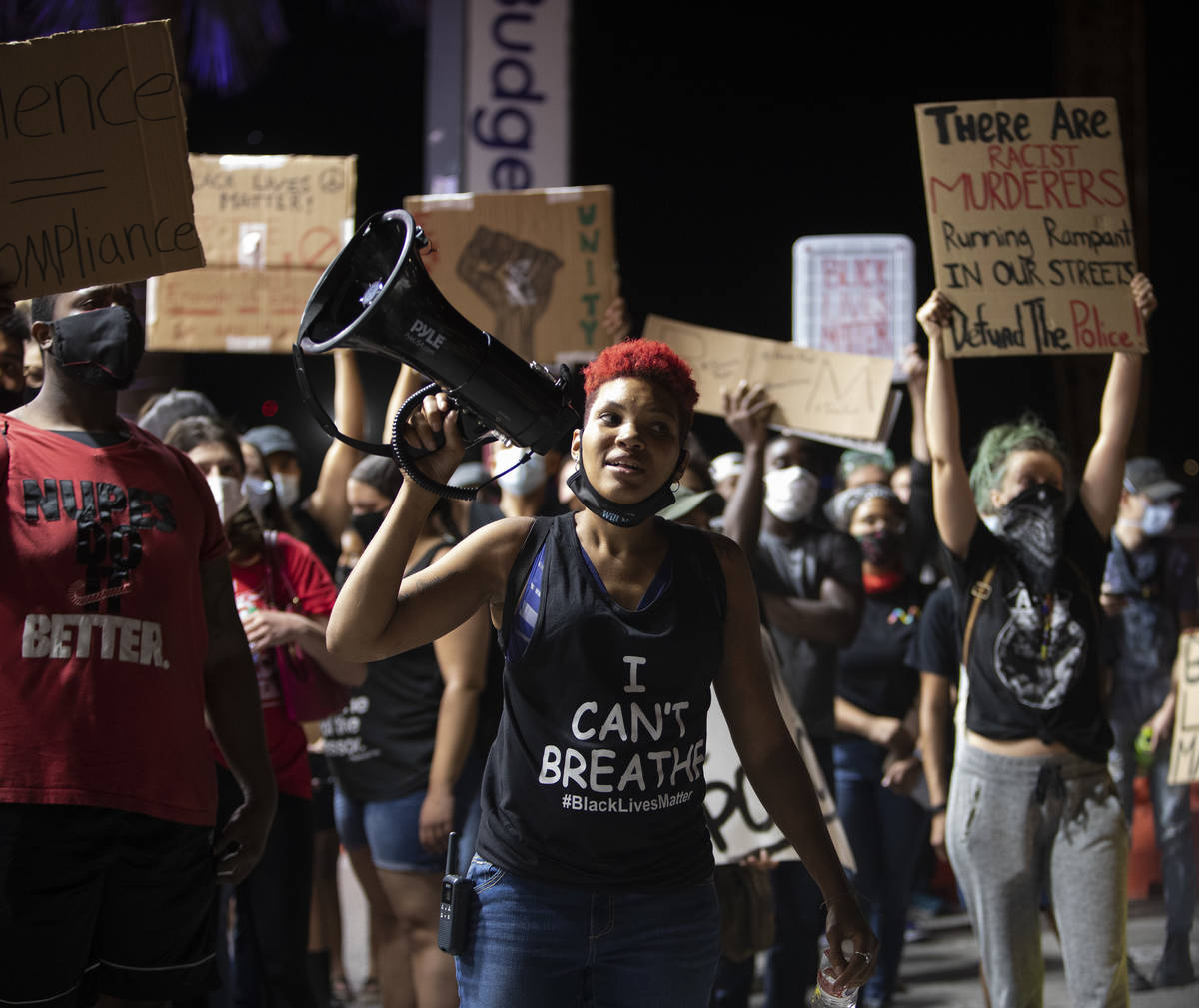 Zyera Dorsey, a local organizer who took control of the march against police brutality when it moved to the Strip, wraps up the evening and encourages protesters to go home on Sunday, June 14, 2020 in Las Vegas. (Ellen Schmidt/Las Vegas Review-Journal) @ellenkschmidttt

A Black Lives Matter protest that began at 6 on Sunday night at Molasky Family Park ended after five hours and without any police presence or arrests.

According to a Facebook post, the protest was organized to coincide with President Donald Trump’s birthday, June 14, and that Trump’s last Las Vegas rally was held at the convention center in February.

“Join us and say and show that police need to be held accountable and held to a high standard regardless of the state or in the world,” the post read.

The protest comes a day after Las Vegas police arrested several legal observers and others at a march on the Strip, which drew condemnation from Nevada lawyers and officials.

Back at convention center

The protesters had made it back to the convention center around 11 p.m. The protest appears over. Participants are seeking rides and dispersing.

The remaining protesters made it to Flamingo, turned around and headed back the way they came.

Protesters have just passed in front of The Mirage. Organizers have asked them to stay to the right to allow for pedestrian traffic. No police interaction so far.

Protesters have reached Spring Mountain Road and crossed the pedestrian bridge. They were greeted by a cascade of honking horns from motorists showing their support.

A segment of protesters has arrived on the Strip. Organizers instructed them to stay on the sidewalk and to stay close together as they chanted “black live matter.”

Protesters held up their phones to send a message to Las Vegas City Councilwoman Michele Fiore, yelling, “You are about to lose your job!” Fiore has faced growing backlash over “racially charged” comments she made during a recent Republican convention.

At the convention center

Protesters have arrived at the convention center and are shouting, “Get your knee off my neck” as they stood along Paradise Road, across from the Residence Inn by Marriott.

The traffic situation appears dangerous, as they are walking along a very busy road in the dark. Still no police presence.

The group of hundreds has turned north on Paradise Road on the way to the convention center.

By 8, protesters had reached University Center Drive, and there was still no police presence.

Protesters shouted, “No justice! No peace!” Motorists honked in support as they drove by.

The group of hundreds began moving west on Twain and toward the convention center. Before they did, organizer Tia Coward set forward a set of reforms she said are needed for Las Vegas police.

— A ban on the use of knee and choke holds.

— Use of force continuum with multiple steps aimed at de-escalation.

— Open records to detail officers with problematic use of force histories.

— Denial of re-certification of those officers.

— An effective citizen review board.

“We must change. We need to defeat racism in every aspect of life,” she said.

The group has been listening to speakers, singers and poems before the march begins. Local organizer and minister Vance “Stretch” Sanders spoke to the crowd, noting that this movement isn’t going to be a short one.

More than 200 people had gathered on Twain preparing to march. Several in attendance said they were heartened by the turnout.

“I’m very proud of my fellow Las Vegas citizens coming out since May to do this,” said Thomas Gilbert.

Gilbert said he’s optimistic that the BLM movement will achieve real societal change, but participants must continue to push forward to have their voices heard and change minds.

“A lot of people have a lot of great ideas, but the smallest baby step is ‘police must do better,’” Gilbert said. “Beyond that, people are very resistant.”

Nearly 200 people gathered in a semicircle in a parking lot off Twain for prayer, song and inspirational remarks from minister JudyAnn Young of Las Vegas.

Young encourages attendees to recognize the BLM movement as an important moment in history. She encouraged those gathered to remember history and that the Rosa Parks Montgomery bus boycott lasted more than a year. She cited the name of Emmett Till, reminding how long and difficult the struggle has been and continues to be.

“Racism is the original pandemic in America,” she said. “An insidious pandemic eating at the core of our soul.”

She encouraged marchers to become politically active and pay attention to local political races, including those that have a direct effect on the criminal justice system.

“Get our and vote. Make a difference,” Young said. “If you don’t, we will pass this toxic disease to your children. Know your history … If you don’t, I’ll be dead and gone and you’ll still be having this same insidious conversation.”

Start with a prayer

A touch-free prayer took place to kick off the protest against police brutality. The group was preparing to march to the convention center.

“We are a trade show marketing company,” he said. Until that comes back, he said, they are out here supporting the Black Lives Matter movement.

“We use the company as a platform to gather our employees and network because this is an issue worth standing for,” he said. “I’m a white man, and it is important for our black community to know there are people who stand for what they are doing in their struggles.”

Las Vegas Ayanna Samuels joined with nearly 200 people along Twain, preparing to march to the convention center. The march was Samuels’ second, and she plans to continue marching until reform becomes real.

“I hope to get change for our police system and our systemic racism as it relates to black lives and people of color not being treated with proper respect and fairness by our police department,” she said.

She said the protests she’s been to have been “entirely peaceful with large turnouts.”

An organizer for Sunday night’s Black Lives Matter protest said she was disappointed with arrests of marchers Saturday night but said she doesn’t expect the scene to repeat itself.

“We just plan on being peaceful,” Zyera Dorsey said as she gathered with dozens of marchers along Twain Avenue near Maryland Parkway.

“We’ve been very peaceful,” she said. “We’ve been antagonized a bunch, but this is going to be peaceful.”

She said she expects no arrests tonight, and she hopes marchers’ message of unity and reform are heard.

“I believe that we have been living in a corrupt system for hundreds of years and trying to do anything less than fix it is just a Band-Aid,” she said.