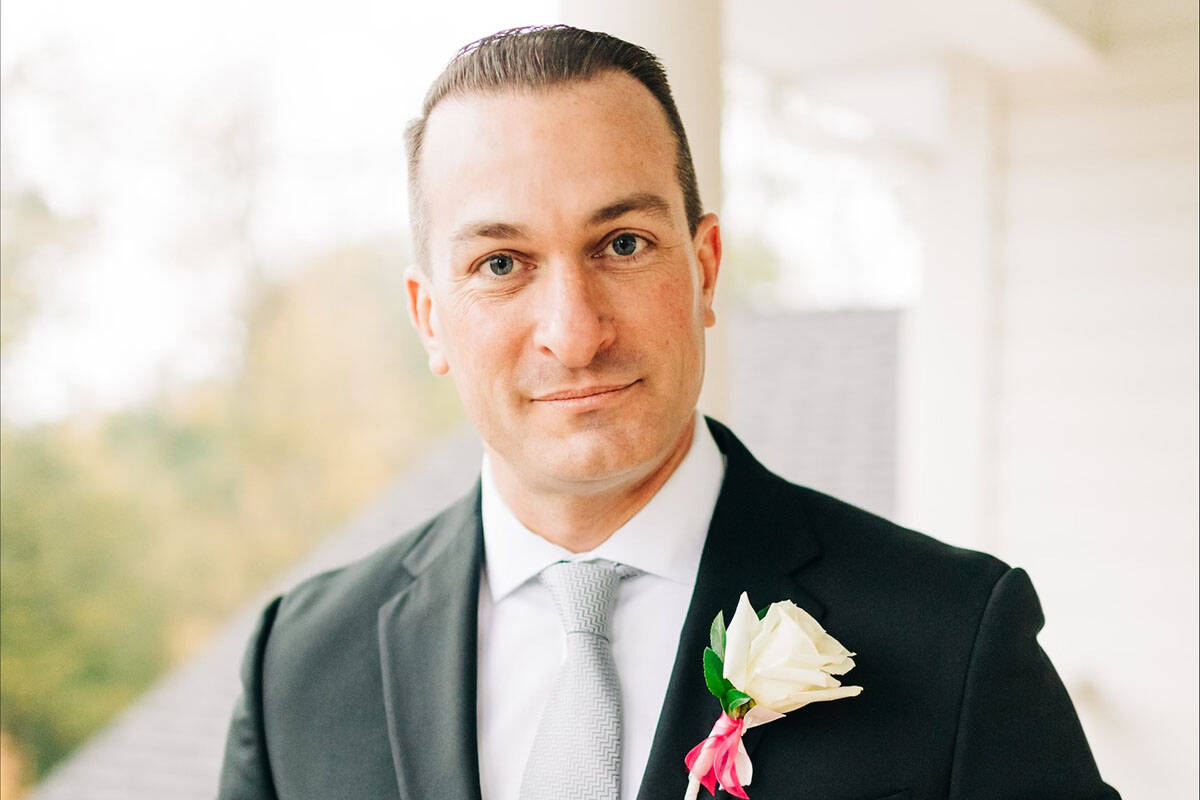 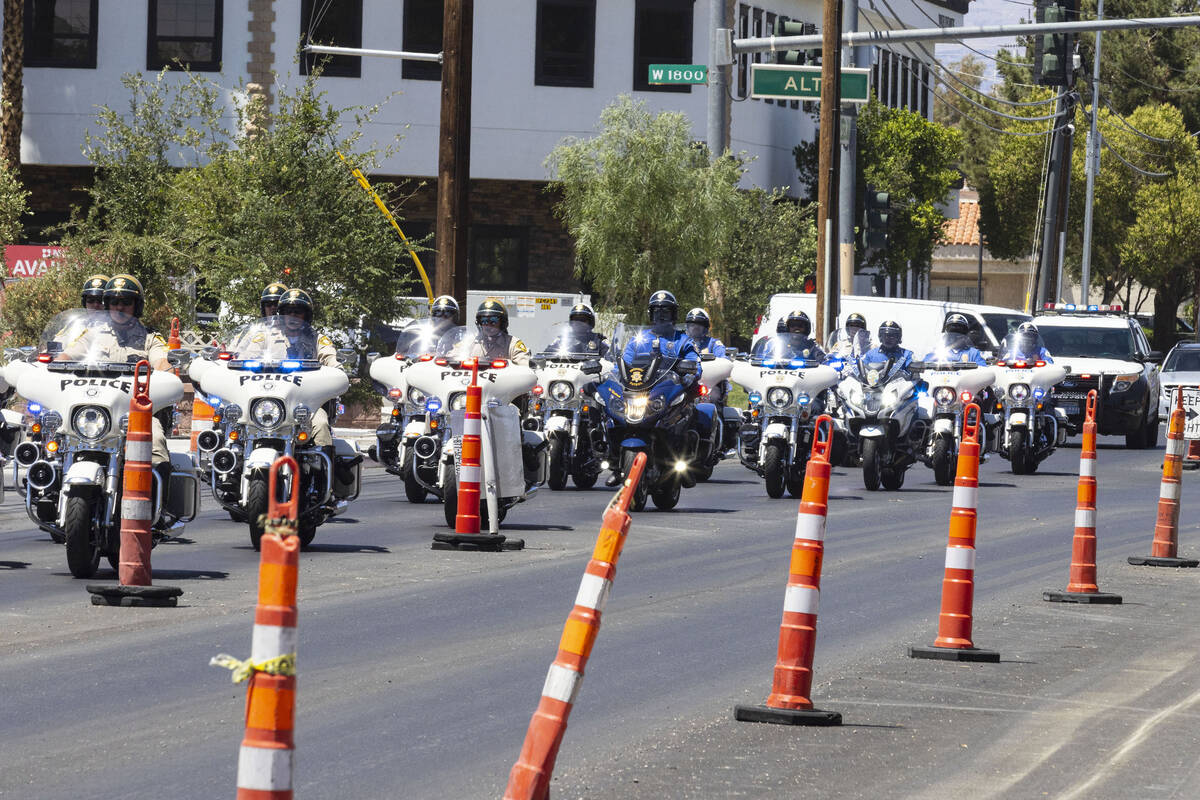 Las Vegas police cars and motorcycles escort the body of a Metro police officer, killed after a beam fell on his vehicle, to the Clark County coroner’s office on Friday, June 10, 2022, in Las Vegas. (Bizuayehu Tesfaye/Las Vegas Review-Journal) @btesfaye 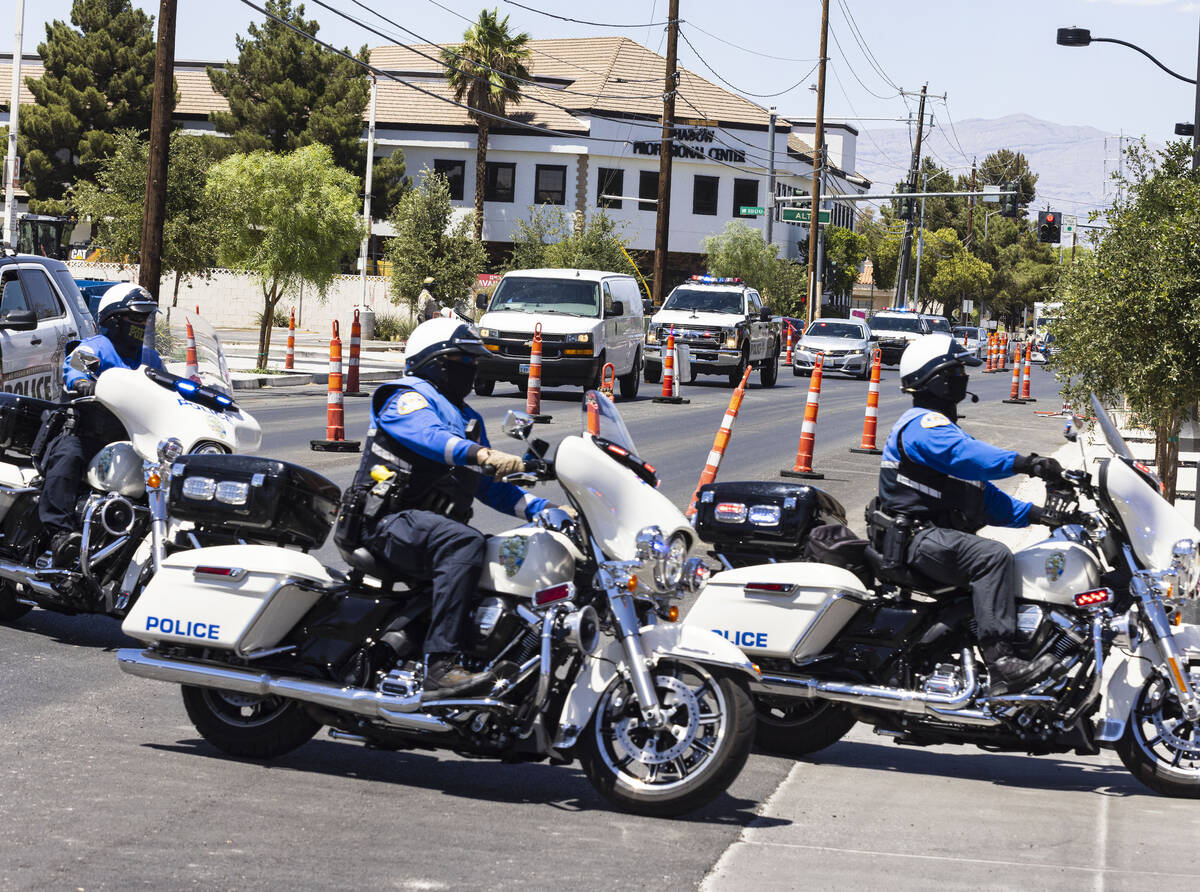 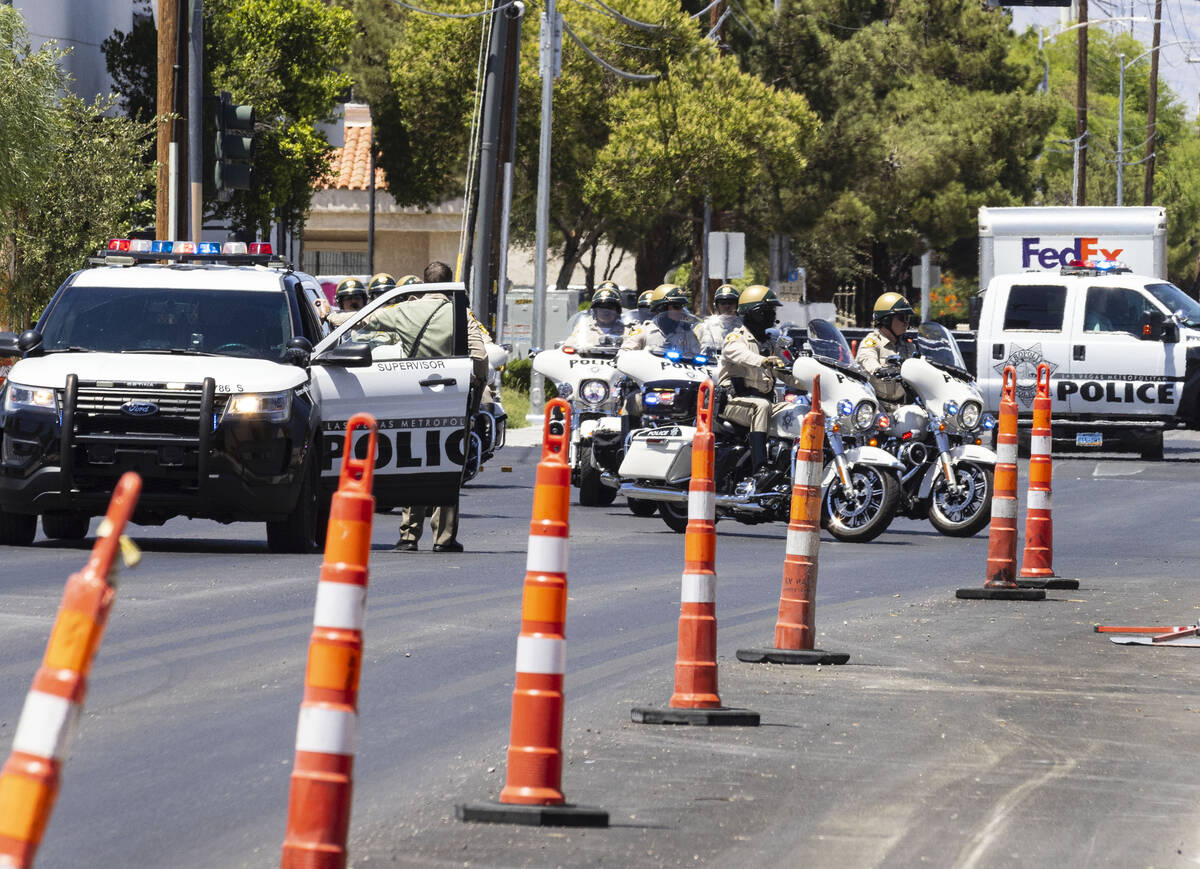 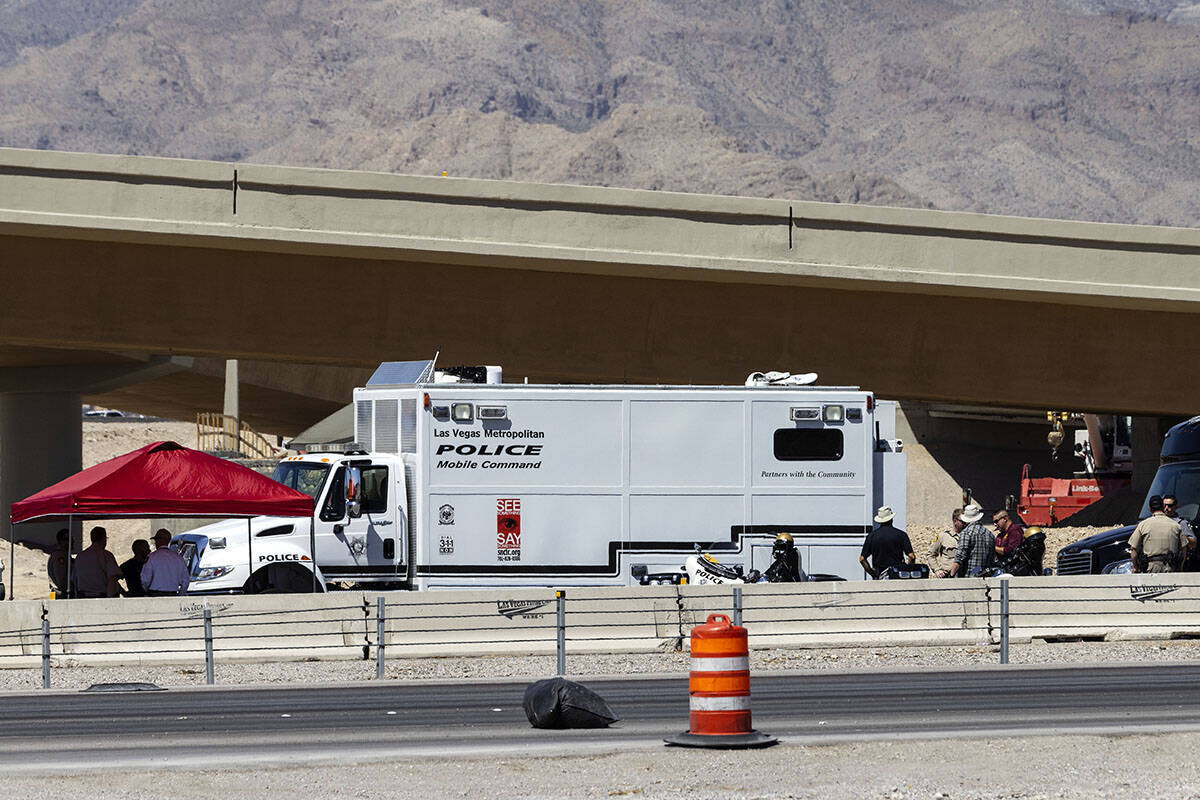 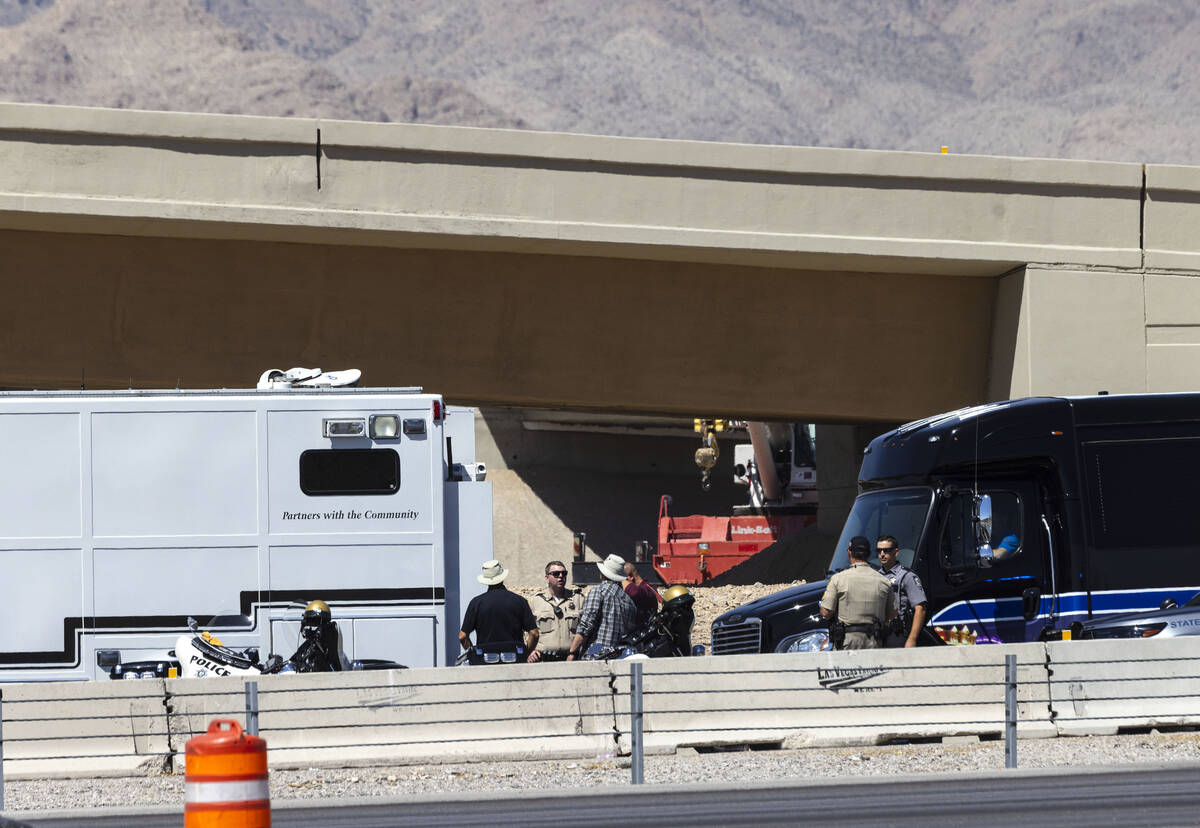 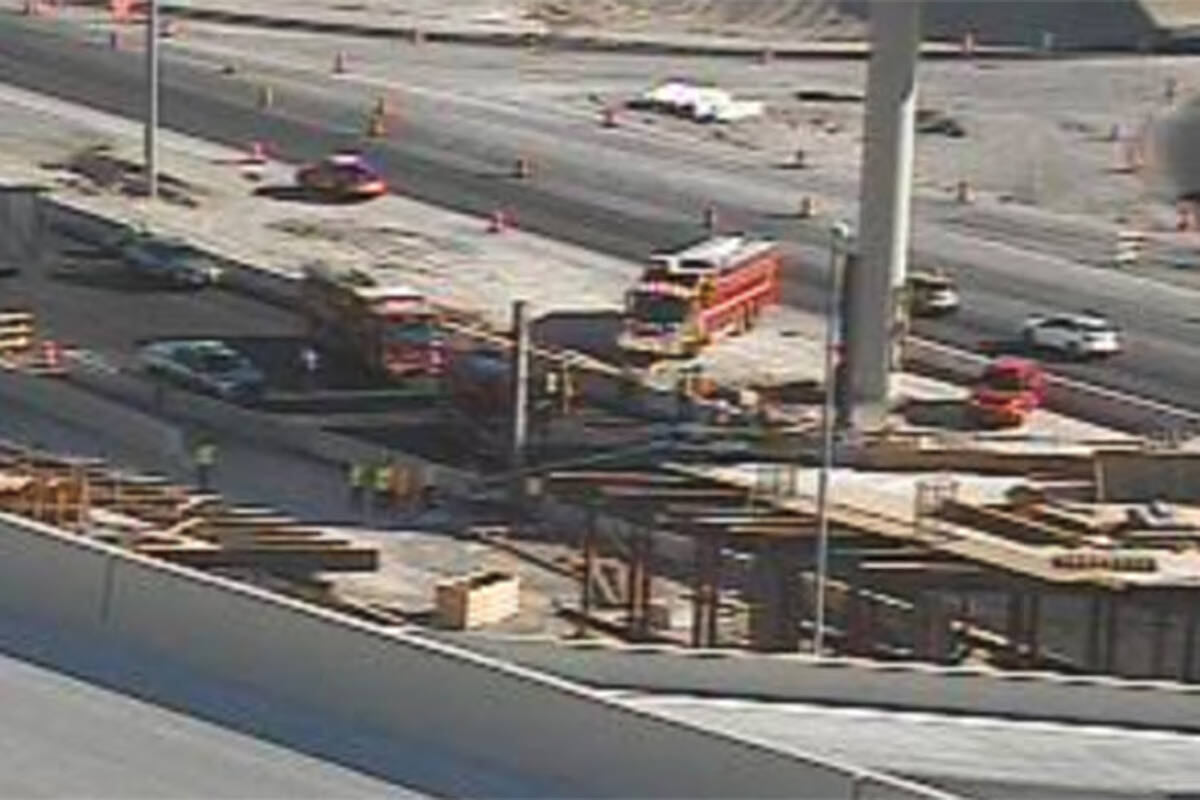 Southbound U.S. Highway 95 is shut down in the northwest valley Friday, June 10, 2022, because of fallen construction equipment. (NDOT FASTCam) 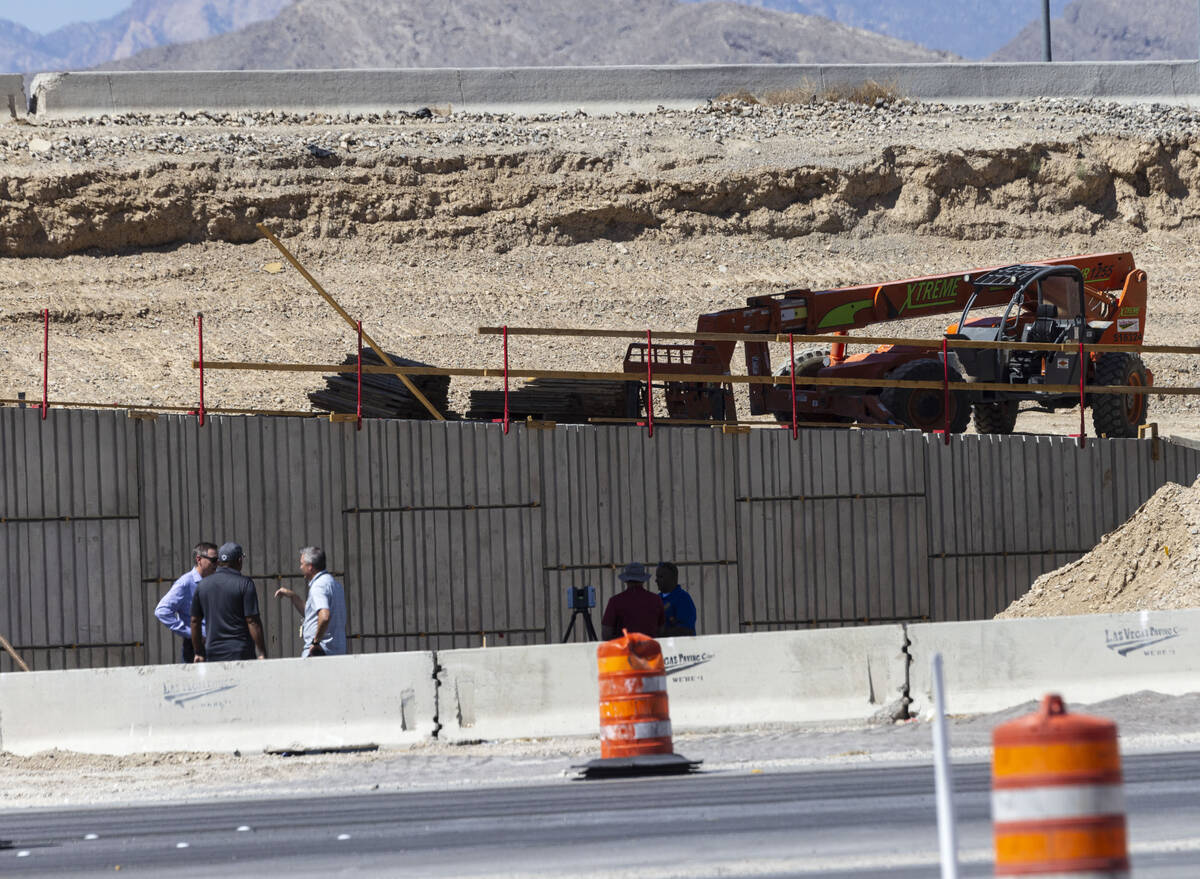 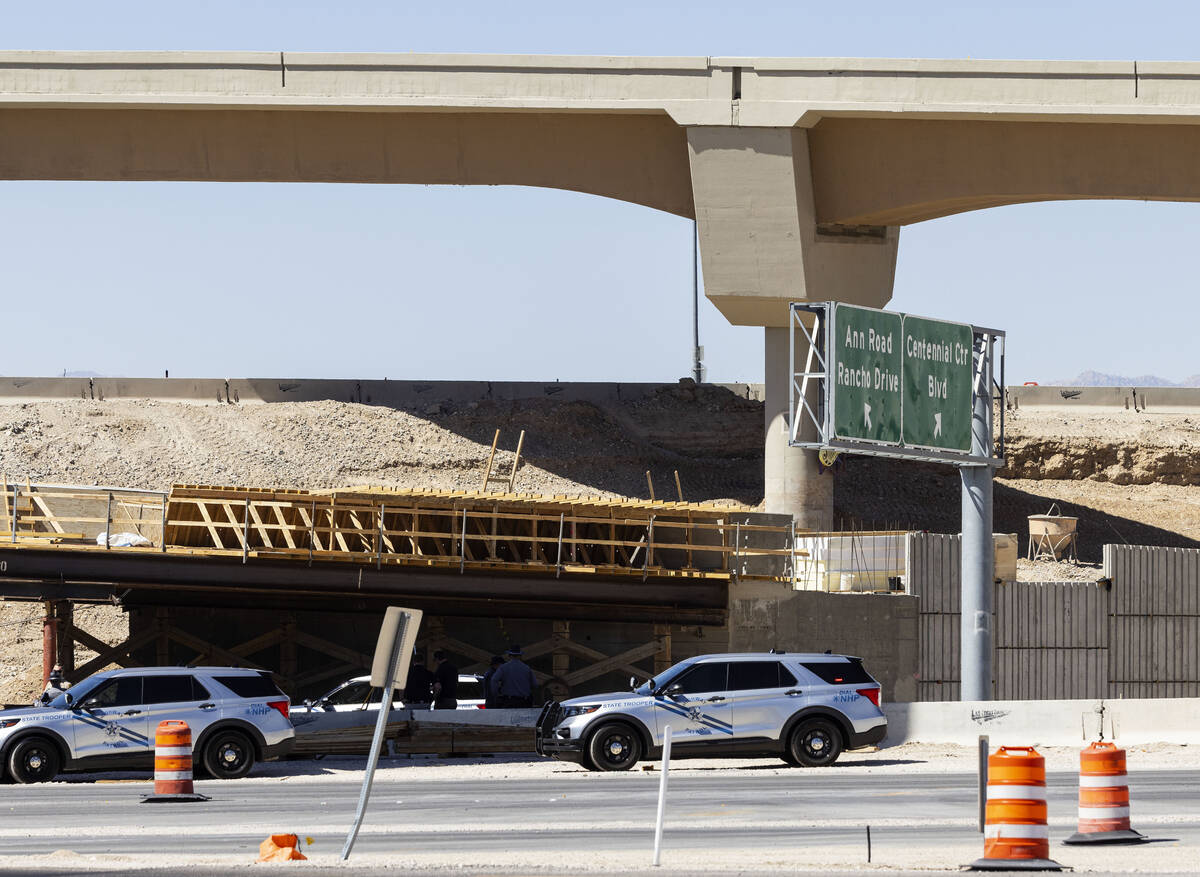 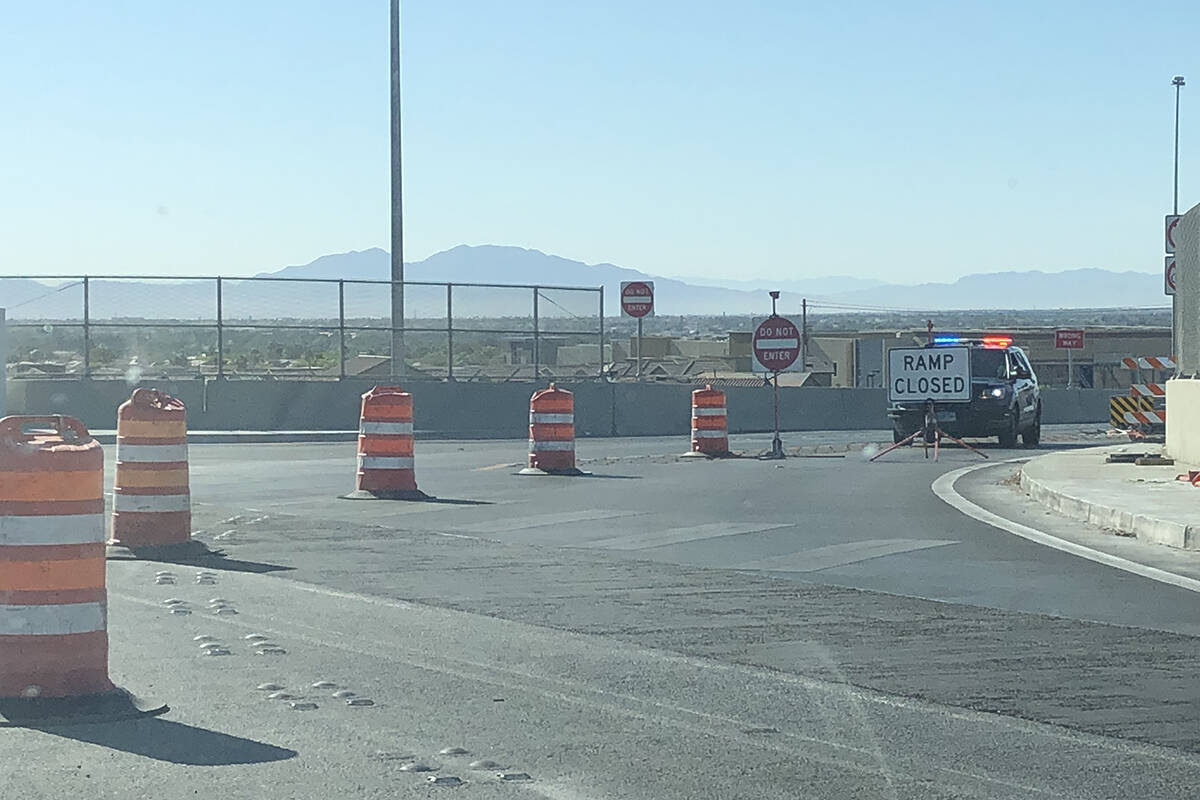 Nevada Highway Patrol spokeswoman Ashlee Wellman said a semitrailer towing an excavator was headed south on U.S. 95 near the 215 Beltway at 7 a.m. when the excavator struck a beam that was part of the Nevada Department of Transportation’s Centennial Bowl construction project.

The large steel beam then tumbled onto the highway, crushing an unmarked police vehicle driven by Detective Justin Terry, 45. He died at the scene.

“A beam fell on top of a car,” Las Vegas Fire Department spokesman Tim Szymanski said. “When we arrived, several people were trying to give aid. There was one person in the car deceased, and we turned it over to the Nevada State Police.”

The death led to a stirring tribute to Terry from his co-workers Friday afternoon. The officer’s body was transported from the crash scene to the Clark County’s coroner’s office by a procession of more than 60 police motorcycles, cars and SUVs. Police closed the on-ramps to southbound U.S. 95 as the procession rolled into central Las Vegas and down Rancho Drive to the coroner’s office.

Terry was on duty at the time of his death. Police said he was assigned to the homicide sex crimes bureau, sexual assault and abuse section. He joined the force in 2001.

“He started the enduro program at Southeast Area Command, making it possible for officers to ride dirt bikes into hard-to-reach locations to feed the homeless,” the Metropolitan Police Department said in a statement.

“He was widely regarded as an expert and worked directly with the U.S. Marshals Task Force,” the department said.

Terry is survived by his wife and two sons.

“In a tragic accident on the freeway, one of our own lost their life,” Grammas said. “Not only is this loss felt by all first responders in Nevada, but the community at large has also lost one of its heroes. We pray for strength and comfort for our fallen brother’s family and friends as well as our entire community.”

Justin Hopkins, spokesman for the Transportation Department, said the crash occurred at the construction project connecting U.S. 95 with the Beltway.

He said the large truck, which was not associated with the Transportation Department, was towing construction equipment through the area and struck a beam, causing it to tumble. Hopkins described the truck as carrying “an oversized load” at the time of the crash.

The beam that fell was 15 feet above the highway. It was part of a system of warnings to remind drivers there is low clearance in the construction area of the Centennial Bowl project, Hopkins said. The beam is also in place to prevent a vehicle without the necessary clearance from causing damage to bridges under construction farther down the road.

”We have a really rigorous permitting process when it comes to things like this,” Hopkins said. “Any time someone is carrying an oversized load, they do have to go through our permitting office. Our office does check their routes and will flag any potential load clearances. We would have them detour as necessary.”

The department was working Friday afternoon to determine the permit status of the truck involved.

Traffic was being diverted off U.S. 95 onto Durango Drive. The Regional Transportation Commission said the highway had reopened after 6:15 p.m.

“Kathy and I join the law enforcement community and so many more in mourning Detective Justin Terry, who was killed on duty today,” Gov. Steve Sisolak wrote. “We’re sending our love and prayers to his family and friends during this difficult time.”

“I am deeply saddened to hear of the Las Vegas Metro Police Officer who was killed in today’s accident on U.S. 95.,” wrote U.S. Rep. Steven Horsford, D-Nev. “My thoughts are with the officer, his family and friends, and all of our Nevada first responders.”

Las Vegas Mayor Carolyn Goodman wrote: “Our prayers and support are with his family and our entire law enforcement corps of service personnel. May his soul Rest In Peace.”

“This is absolutely tragic,” wrote Nevada Assemblyman Roberts.who is a retired Metro assistant sheriff “My condolences go out to the family during this difficult time.”

“Detective Justin Terry served Las Vegas for over 20 years and I’m heartbroken to hear of this tragic accident,” wrote Sen. Catherine Cortez Masto, D-Nev. “My deepest condolences to his family, loved ones, and the entire LVMPD community.”