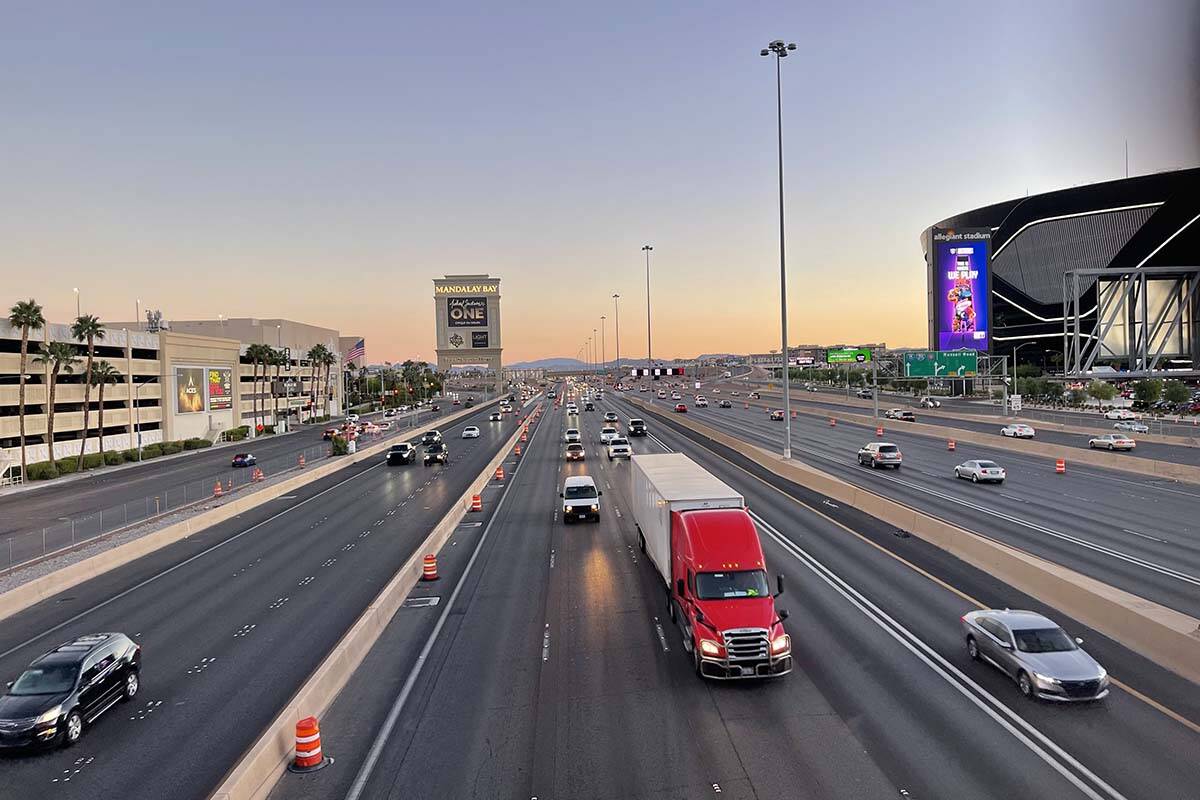 Motorists should brace for heavy traffic in Las Vegas this weekend with a trio of large events taking place near the resort corridor.

On Friday, the Pac-12 championship takes place at Allegiant Stadium with kickoff slated for 5 p.m. The No. 4 USC Trojans are facing the No. 12 Utah Utes in what is expected to be a sold out affair.

Expect heavy traffic on Interstate 15 from the state line through the resort corridor for the title game, as a large number of fans are expected to come to the game from Southern California. No-fee secondary ticket marketplace TickPick noted 67 percent of its ticket sales to the game derived from California.

The Raiders face rival the Los Angeles Chargers at 1:25 p.m. Sunday at Allegiant Stadium. With the Raiders entering the game on a two-game win streak and the rival Chargers in town, a crowd of over 60,000 should be expected.

The biggest traffic impacts for both the Raider-Chargers and Trojans-Utes should be from two hours before kickoff up to one hour after the conclusion of the games and will mainly be felt on I-15 and surrounding roads. Those include Las Vegas Boulevard, Russell Road, Tropicana Avenue and Dean Martin Drive.

This is especially true for the Pac-12 championship game Friday night as attendees mix in with the usual afternoon rush hour on I-15.

There are no additional restrictions this weekend with the major I-15/Tropicana project. Some road restrictions along Tropicana and Dean Martin are set to wind down ahead of the weekend, Justin Hopkins, Nevada Department of Transportation spokesman, said.

Drivers should also brace for nightly traffic impacts near the Thomas &Mack Center where the National Finals Rodeo is taking place Thursday through Dec. 10. Each night the rodeo is slated for 5:45 p.m. start times.

Expect increased traffic on roads before and after each night of the NFR, including Tropicana, Flamingo Road, University Center Drive, Paradise Road and Harmon Avenue.

The convergence of several major events in one weekend is becoming the norm in Las Vegas and this weekend will be the latest example of the community’s ability to attract major events and drivers’ ability to navigate the traffic those bring, according to Hopkins.

“We are in constant communication with Allegiant Stadium and stakeholders along Tropicana and within the Resort Corridor to spot potential traffic conflicts before they occur,” Hopkins said. “With a weekend this busy, we know drivers can expect extra vehicles on the road. As always, we urge people to plan ahead by carpooling or using public transportation and rideshares.”