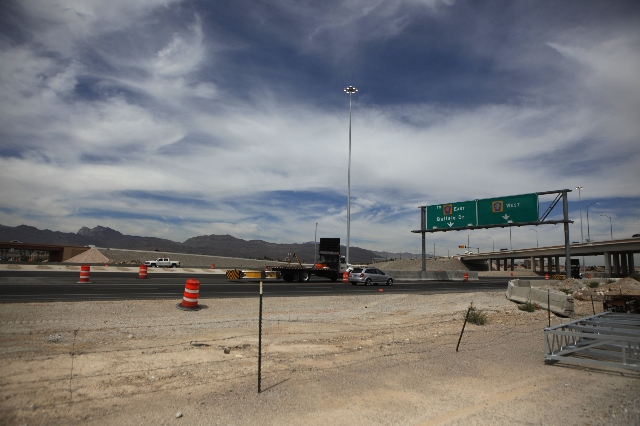 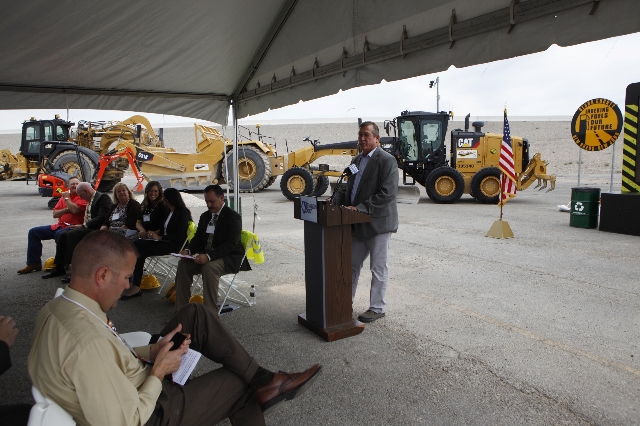 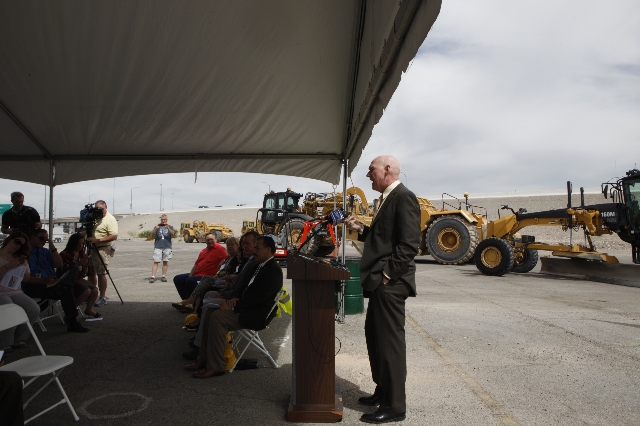 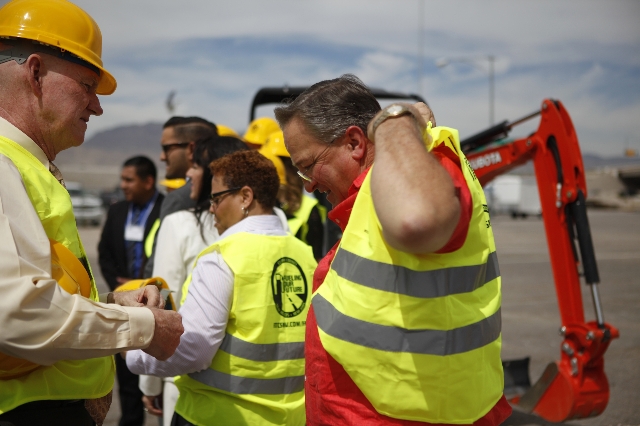 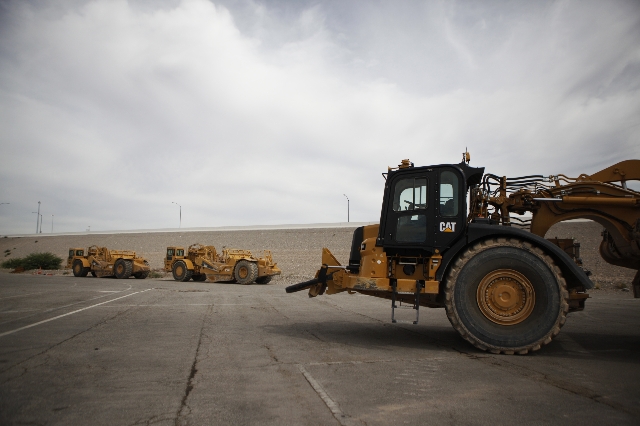 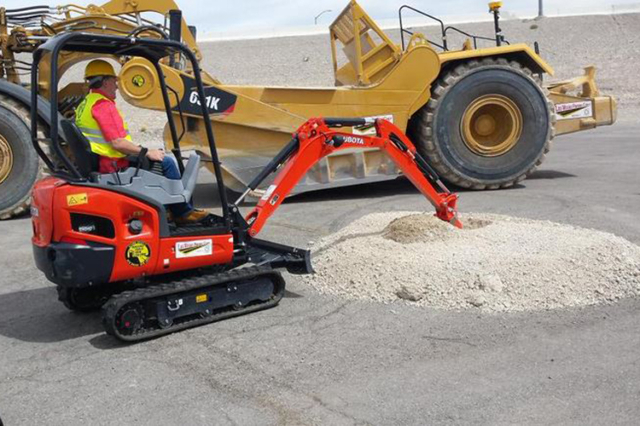 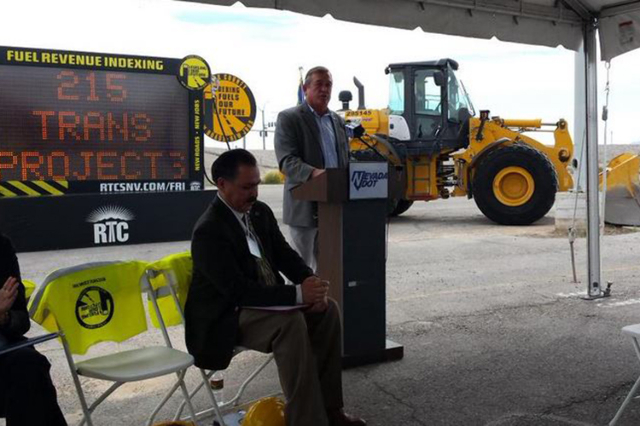 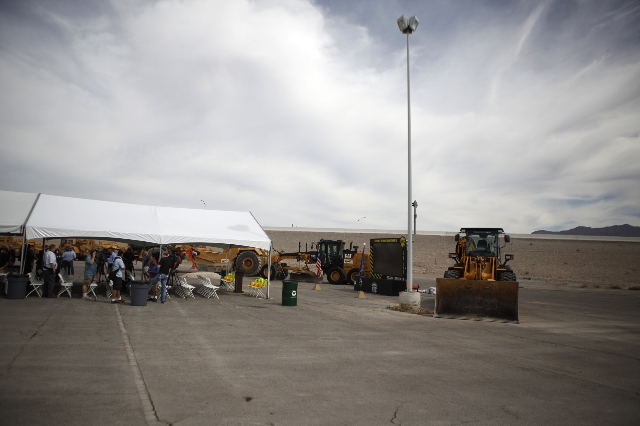 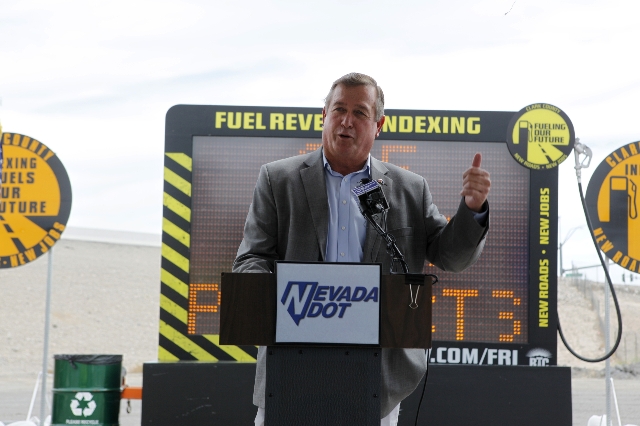 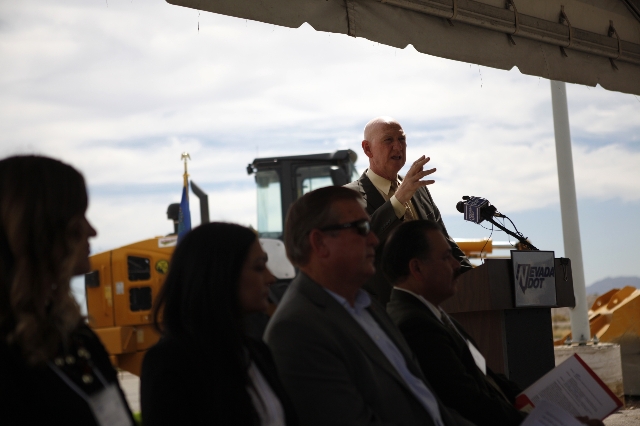 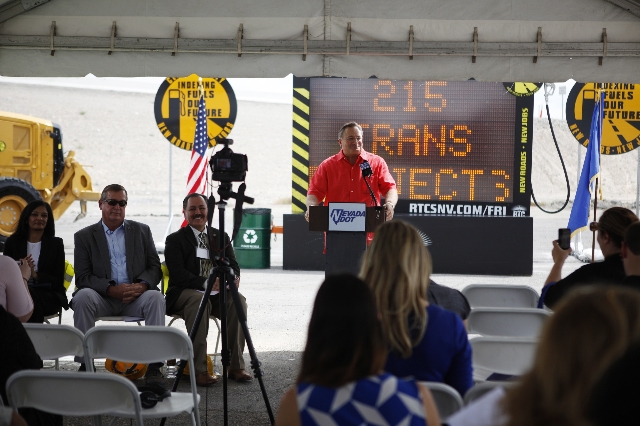 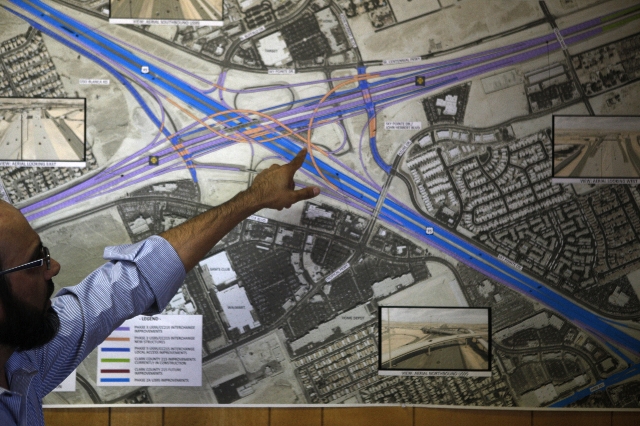 Resident engineer Abid Sulahria shows a map of the ultimate build out of the Centennial Bowl Interchange improvement project at his field office near Interstate U.S. 95 and the westbound 215 Beltway in Las Vegas Thursday, Aug. 6, 2015. ERIK VERDUZCO/LAS VEGAS REVIEW-JOURNAL Follow him @Erik_Verduzco 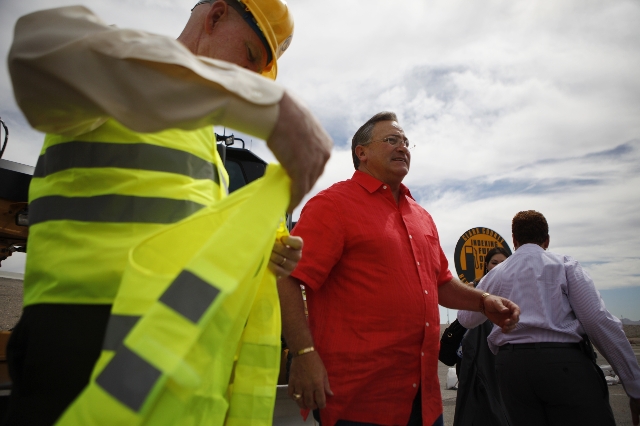 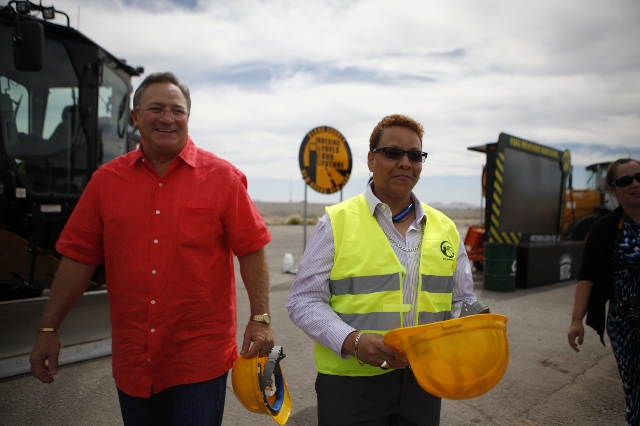 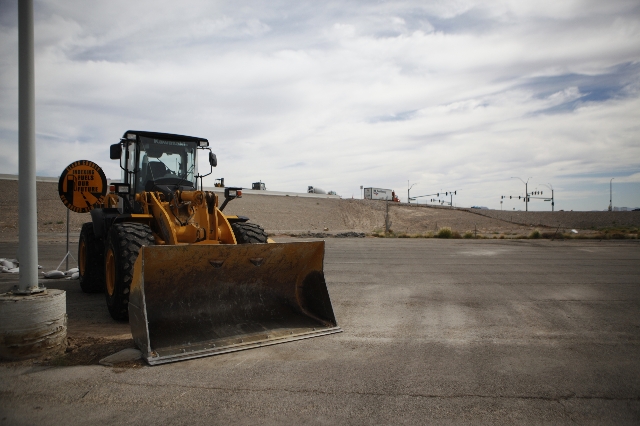 Federal, state and local transportation leaders on Thursday celebrated the start of a freeway interchange project expected to become the second busiest in the state within a few years.

Las Vegas Councilman Steve Ross, a contractor by trade, climbed aboard a small excavator to turn the first shovel of dirt for the $46.7 million third phase of the Centennial Bowl project in northwest Las Vegas.

The project will add two of four direct-connection ramps at the intersection of U.S. Highway 95 and the 215 Beltway. The phase that began Thursday will develop ramps from northbound U.S. 95 to the eastbound Beltway and the westbound Beltway to southbound U.S 95.

The latter ramp will be the highlight of the entire project, a two-lane 2,365-foot flyover bridge that will climb 60 feet high. Construction of the big bridge structure won’t occur until about a year from now, but workers will begin drilling 10 80-foot holes to build the steel-reinforced concrete columns that will support the bridge sections.

Ross’ ceremonial digging was within a few feet of one of those future column shafts.

Speakers at the 45-minute ceremony attended by about 50 people emphasized the teamwork undertaken by federal, state, county and city representatives to get the project going.

“We have to have a unified effort to invest in our infrastructure,” said Clark County Commissioner Larry Brown, who chairs the Regional Transportation Commission of Southern Nevada. “This is what keeps Las Vegas vibrant.”

Rep. Cresent Hardy, R-Nev., vice chairman of the House Committee on Transportation and Infrastructure’s Highways and Transit subcommittee, said the Centennial Bowl interchange is important to the future of interstate commerce because it is expected to be part of the future Interstate 11 corridor.

Ross and Brown also emphasized the importance of the project to employment. Prime contractor Las Vegas Paving is expected to have 100 workers on the project and subcontractors and suppliers are expected to add even more.

Several agencies are contributing money to the project. It’s being built with $19.5 million in federal funding, $6.4 million each from the state and the Regional Transportation Commission and $14.4 million from the Clark County Regional Flood Control District.

The Flood Control District’s contribution is paying for construction of a drainage culvert network beneath the road system and will be in the initial portion of construction.

About 107,500 vehicles use the ramps and Beltway daily at the interchange today, but by 2036, based on population projections and local residential development, the number is expected to climb to 160,000 vehicles a day.

That would make the Centennial Bowl interchange the second busiest in the state behind the Spaghetti Bowl, but ahead of the 215 Beltway-U.S. 95 interchange in Henderson, the U.S. 95-Summerlin Parkway and Reno’s Interstate 80-Interstate 580 interchange.

That’s going to depend upon the availability of funding and it gave Ross the opportunity to present a hard sell on a vote to extend fuel revenue indexing in 2016.

The fuel revenue indexing program enables the Regional Transportation Commission to impose up to a 10-cents-a-gallon tax over a three-year period. Next year, voters will consider whether to extend the program by 10 years.

Ross said if the program is approved, the Centennial Bowl interchange could be completed within four years. If it isn’t, the outlook is completion within 16 years.