They also saw the first indications of dissent and skepticism from an elected official for a light-rail system that would transport passengers from the airport to downtown Las Vegas via the Strip.

Clark County Public Works Director Denis Cederburg unveiled an animation illustrating a pair of elevated two-lane roadways free of traffic signals that would move traffic north from the airport along Paradise Road and south on Koval Lane and Tropicana Avenue.

The plan is a 2,400-page document with 65 recommendations grouped in seven “suites” of projects.

The end goal of the committee is to prioritize the development of transportation, stadium and convention facilities that would keep Las Vegas competitive with other resort destinations.

Thursday’s meeting was dedicated to the transportation projects.

But the project that dazzled the committee the most was the proposed elevated expressway projects. Cederburg said the Koval Lane portion would cost an estimated $108 million while the Paradise project is estimated at $92 million. The roadways would be on bridge structures elevated over the existing street rights of way.

One portion of the Koval route couldn’t be elevated — the section along Tropicana Avenue abutting airport land near the ends of Runways 19L and 19R. Near the runways, the road would be lowered to grade level but kept separate from Tropicana traffic.

Based on a test Cederburg’s staff conducted during CES, he said an airport commute during evening rush hour from Harmon Avenue to the airport took more than 28 minutes. With the elevated expressways, the staff estimated the commute would take just over nine minutes.

Cederburg said construction on the project could begin within about two years if approved.

Committee members also discussed an X-shaped bridge over the Strip that would have landing points in front of the Cosmopolitan, Bellagio, Paris Las Vegas and Planet Hollywood properties. Some committee members questioned whether the price of $30 million would be worth the benefits.

But the biggest cost criticisms came from Clark County Commission Chairman Steve Sisolak, who made it clear that he was skeptical about whether a light-rail system, which would have estimated costs of $700 million a mile, would be worthwhile.

“These numbers just seem to be off the charts,” Sisolak said. “They’re just getting crazy … astronomical.”

Guy Hobbs, managing director of Hobbs, Ong & Associates and a technical adviser to the committee, said a light-rail system would cost between $7 billion and $12 billion in 2015 dollars, but that could balloon to $9 billion to $24 billion by the time the project is approved, designed and under construction.

Sisolak criticized the cost as well as the potential long-term disruption of the Strip at various points in the meeting until committee Chairman Steve Hill finally said, “We get the point. You have some concerns about the costs.”

The afternoon session featured presentations from cities that have successfully implemented light rail. Representatives of systems in San Diego, San Francisco, Salt Lake City and Denver explained how there initially was concern about costs when rail systems were first proposed, but that once they were in place, economic development bloomed around rail stops and passengers were excited about rail lines being extended to their neighborhoods.

Curtis Myles, president and CEO of the Las Vegas Monorail, surprised some members of the committee by saying the company was still looking at the prospect of extending the monorail to McCarran — using a portion of the right of way that Cederburg had mentioned for the car expressways.

In recent months, Myles has stated publicly that the company is focused on extending the monorail line south from the MGM Grand station to the Mandalay Bay Convention Center and building a new stop near the Sands Expo and Convention Center so that all three of the city’s major convention centers would be linked by a single transportation system.

Myles estimated a new stop at the Sands Expo and Convention Center would cost $12 million to $14 million to build and that the cost of extending the line a little over a mile to Mandalay Bay would cost between $120 million to $140 million.

XpressWest chief operating officer Andrew Mack gave a brief update on the company’s high-speed rail plan, which would be developed in phases with one being a 185-mile dedicated dual track between Las Vegas and Victorville, Calif., the second a 50-mile section between Victorville and Palmdale, Calif., and the third being to link the route to commuter rail in Palmdale.

Eventually, the California High-Speed Rail System would run between Los Angeles Union Station and Palmdale where the XpressWest system would connect.

The ultimate goal is to be able to provide one-seat, no-transfer service between downtown Los Angeles and Las Vegas. 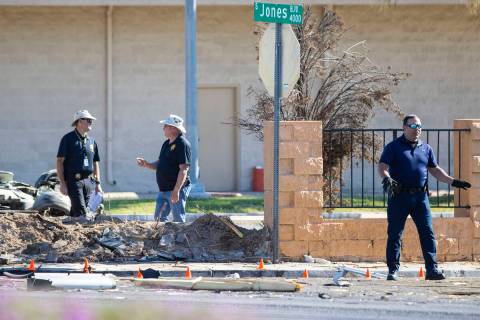