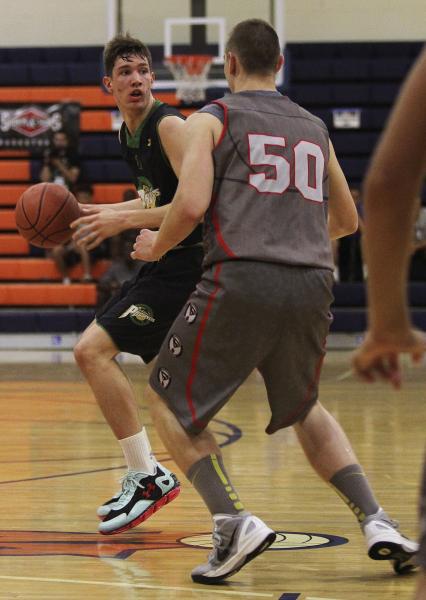 Spencer Mathis got his first taste of life in a small town while living in Missouri nearly a decade ago. And he loved it.

So when it came time to choose a college, the senior at Valley jumped at the opportunity to return to that lifestyle.

“Being in the city so long, I got tired of it,” Mathis said Wednesday. “I really wanted to go to a school in a town setting … where the whole community is behind the college.”

Mathis, a 6-foot-7-inch small forward, made an oral commitment to Northern Colorado during his official visit to the school. His commitment is nonbinding, and the first day Mathis can sign a national letter of intent is Nov. 13. Northern Colorado’s coaches cannot comment until that time.

Mathis chose the Bears over Portland and Santa Clara. He also had scholarship offers from Cal State Fullerton, Idaho State and Southern Utah.

Mathis grew up in Las Vegas until he was 7 years old and his family moved to Rogersville, Mo., a town of about 3,000 located 20 miles from Springfield, Mo. Mathis returned to Las Vegas a few years later, but he always dreamed of returning to a small town.

Northern Colorado is located in Greeley, Colo., which is 50 miles outside of Denver and has a population of approximately 95,000.

“I always wanted to go back to that feeling and live that life again,” Mathis said. “It’s the perfect fit. I get all four seasons at Greeley.”

Mathis was a second-team All-Northeast League pick as a junior after averaging 15.7 points, 5.2 rebounds and 1.9 assists per game. The Vikings finished 21-10 and reached the Division I state play-in game after earning a share of the Northeast title.

Northern Colorado, which competes in the Big Sky Conference, went 13-18 last season and is led by fourth-year coach B.J. Hill.

“I enjoyed the recruiting process, but now that I have made my commitment, it feels good to be able to relax and focus on my grades and my senior year at Valley,” Mathis said. “I want to see us make it as far as I know we can make it.”