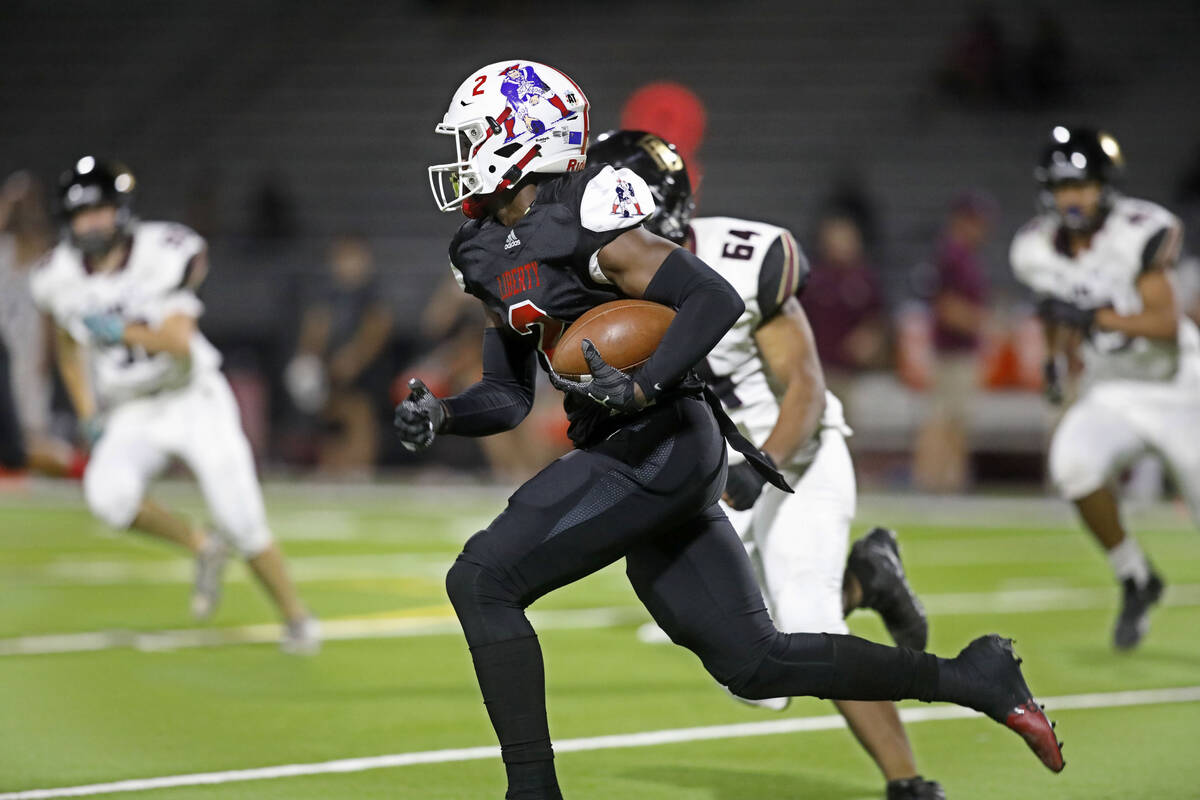 Liberty High School's Germie Bernard (2), center, runs into the end zone for a touchdown during the second half of a football game against Faith Lutheran High School, Friday, Sept. 24, 2021, at Liberty High School in Henderson.(Chitose Suzuki / Las Vegas Review-Journal) @chitosephoto 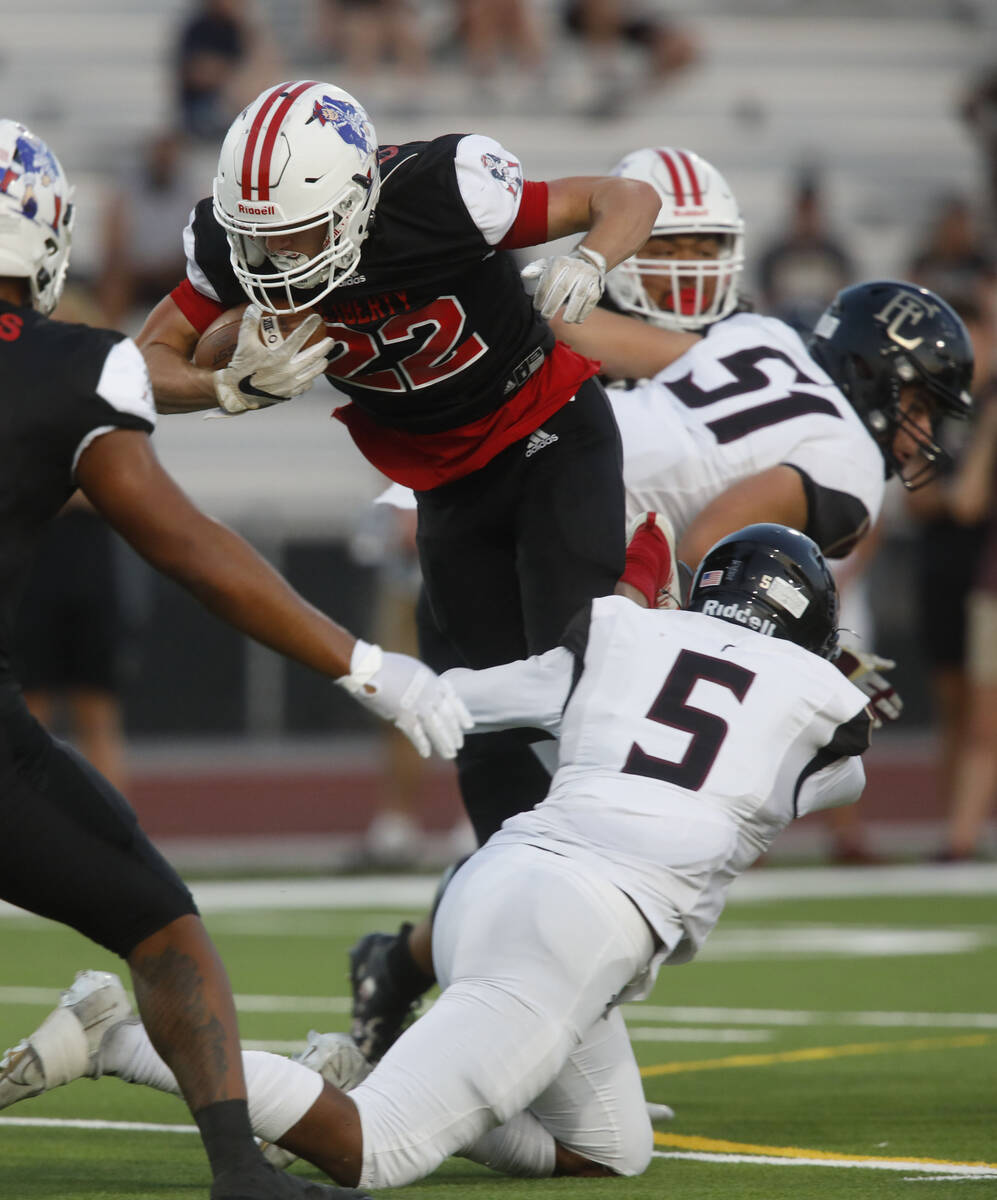 In some ways, Friday night didn’t look much different for Liberty.

The Patriots went down the field for a touchdown on their first drive and never relinquished control in a 37-7 win over Faith Lutheran to start Class 5A Mountain League play.

But it was anything but a normal night for Liberty, which had nearly 40 players out because of COVID-19 protocols.

With that many players out, it begs the question: Why was Liberty allowed to play? Thirty-one games have been canceled in Southern Nevada this season, according to the Nevada Interscholastic Activities Association, many of which were because of COVID-19 issues.

A text message to Clark County School District athletic director Tim Jackson on Saturday seeking clarification on the district’s rules and implementation processes was not returned.

“It’s been fluid. They’ve changed things a little as they’ve gone,” Liberty coach Rich Muraco said. “It’s case by case. It’s not a one-size-fits-all thing. They do contact tracing, but we’re fortunate to have 180-190 kids in the football program and had enough to play.”

The NIAA’s Guidance 1, released in August, said football teams were to test all nonfully vaccinated players each week, but left the planning and implementation to each school district.

Muraco said test results are taking longer and longer to receive. At first, it was Wednesdays, then Thursdays and even Fridays as earlier in the year against Foothill, when Liberty quarterback Jayden Maiava was a last-second scratch because of COVID-19.

Muraco said he began receiving notifications Sept. 18 from parents of positive tests. That allowed the Patriots to begin formulating a plan of attack for the week, which in turn helped the players get ready.

“We’ve been planning in case this scenario happened,” Muraco said. “We took inventory of how many kids were vaccinated, and we do a COVID period with just those kids. If I knew in time before the JV games (on any week), I’d bring up the vaccinated JV kids. This week, I just brought them all up, so there were about 60 on the sideline.”

Muraco said from the beginning of the season that the Patriots have done separate practices for their teams to try to limit exposure.

“That’s really important to keep the teams separated because the threshold is very low,” he said. “Let’s say you have a practice with JV and varsity, and three test positive. If you have three test positive, even if they’re on JV, it could wipe out your varsity.”

With the form Moapa Valley and Virgin Valley had shown in the first few weeks and the way their schedules lined up, it was reasonable to think both could get to their annual Hammer Game in Week 10 with undefeated records.

But SLAM Nevada had other ideas.

The surging Bulls ran to a 21-0 second-quarter lead before the Bulldogs rallied to get within 21-14. They had the ball and were driving late, but Blayz McGhee squashed any chances of a comeback with an interception at the SLAM Nevada 10-yard line.

It was the fourth straight win for the Bulls, who started 0-2 and were 3-7 in their first full season of NIAA membership in 2019. Coach Mike Cofer didn’t hesitate Saturday when asked if calling Friday’s win the biggest for the program would be overstating things.

“Not at all,” Cofer said in a text message. “I think last night opened a lot of eyes. … We won’t be able to sneak up on anybody anymore.”

Arbor View will host Palo Verde in a battle of teams trying to avoid an 0-2 start to Class 5A Desert League play. Arbor View lost to Bishop Gorman 52-0, and Palo Verde lost to Foothill 42-20.

Green Valley, fresh off its Henderson Bowl win over Basic, opens 5A Mountain League play at Desert Pines, a 62-0 winner over Centennial on Friday in its league opener.

Durango at Clark and Las Vegas at Basic should help begin sorting out the 4A Mountain League standings.

SLAM Nevada will continue its quest to make noise in 3A by opening Desert League play at Pahrump Valley.