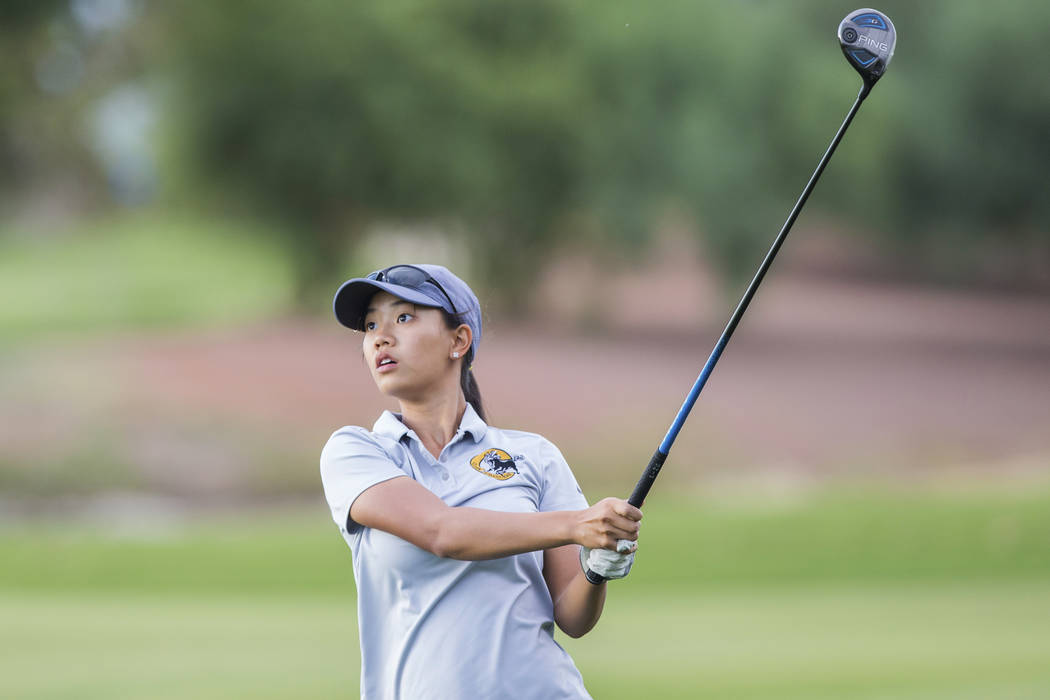 It’s not easy to shake off a bad hole in golf. It’s even more difficult when it can take what appeared to be a sure championship away.

Clark’s Riana Mission had a four-shot lead evaporate when she put two shots into the water as part of a nine on the 16th hole at TPC Summerlin in the 4A state championship tournament’s final round Tuesday.

Mission rebounded from that with a solid par on 17, then drained a short birdie putt on 18 to close with a second straight 73 and a 2-over 146 to claim the title. Centennial’s McKenzi Hall, with whom Mission tied for second at state last year, was second at 4-over (74-74 — 148).

“I think I just started to get a little anxious knowing I’ve always had a little more trouble on these holes coming in,” Mission said. “After I hit it into the water (twice), I knew I just had to settle down or else I would have no chance because I knew I had that lead.”

While Mission was closing out the individual title — Clark’s first since 1979 — Bishop Gorman’s consistent team effort was enough to bring home its first crown since 2006.

“It’s fantastic. We’ve got representation from seniors, juniors, sophomores and freshmen this year,” Gorman coach Jim Stanfill said. “We’ve got three seniors on this team that have worked their tail off to get back to this point and have really given a lot to the program.”

Mission stepped to the 18th with a one-stroke lead and calmly hit her drive down the middle. She followed that up with an approach to the right of the hole that took the slope toward the hole. Hall was also on the green in two, but missed a downhill right-to-left slider, taking some of the pressure off Mission’s 6-footer.

“I’ve played a lot of national tournaments, and I’m one of the top-ranked golfers in the state, so this just means so much,” Mission said. “I’m kind of shocked still.”

In the 3A tournament in Boulder City, Truckee’s Ryan Flynn was 8-under over a 10-hole stretch as part of a 6-under 66 Tuesday. That was 12 shots better than her score Monday and gave her a 2-under 142 and a 12-shot victory.