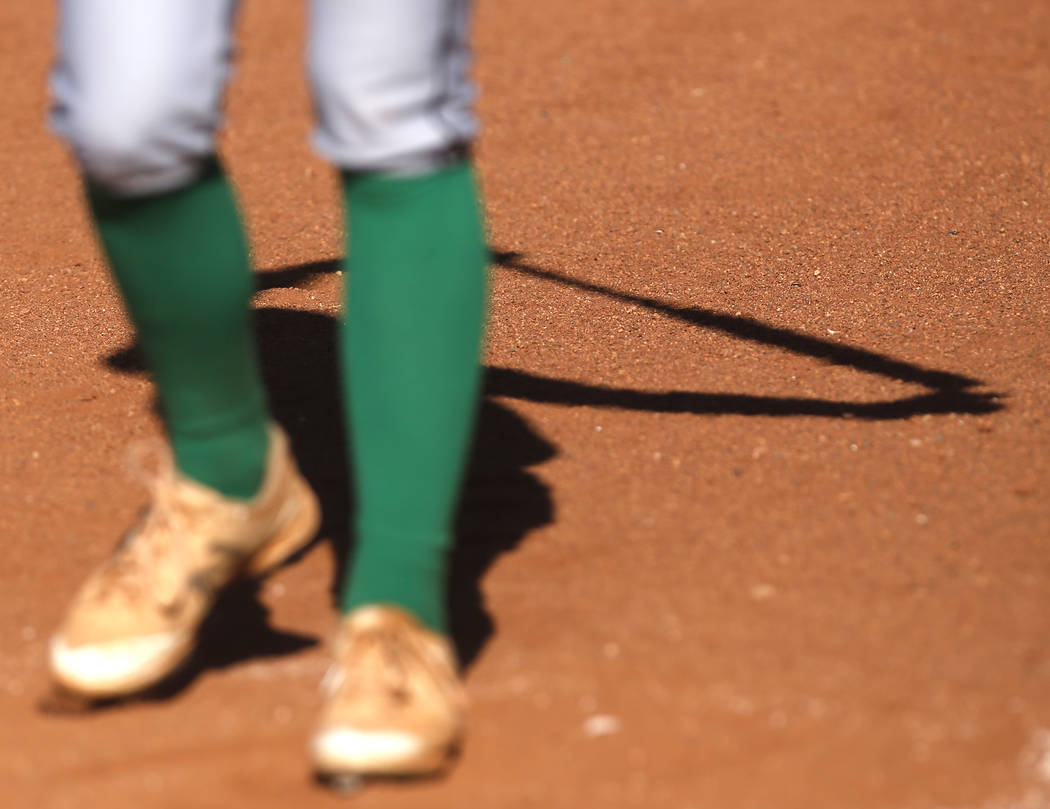 Xheneiya LaRocke smacked a two-run double in the top of the seventh inning for the go-ahead runs, and Valley’s softball team turned a 4-6-5 triple play to finish out a 15-13 win road win over Canyon Springs on Tuesday.

Gabriella Morales was 3-for-4 with a double, two triple and five runs for Valley, and Heather Robinson scored four runs for the Vikings.

Green Valley 12, Rancho 6 — At Green Valley, Hannah Mearideth was 4-for-4 with a double, two runs and four RBIs, as the Gators doubled up the Rams.

Olivia McClain supplied two runs, two stolen bases and two hits, including a grand slam to highlight a five-run fifth for Green Valley, which got three hits and two RBIs from Savannah Fabro.

Cinthia Garcia doubled twice, and Alyssa Vigil earned the win for the Gators.

Basic 5, Foothill 3 — At Basic, four Wolves players cracked homers as they took down the Falcons.

Morgan Matsumoto and Kylie Beckere homered for the Falcons, and Leah Becker tripled.

Faith Lutheran 16, Legacy 1 — At Legacy, the Crusaders scored seven runs in the top of the sixth inning to put away the Longhorns in six innings.

Grace Hornsby was 3-for-4 with four RBIs and Clara Heislen was 2-for-4 with three RBIs for Faith Lutheran.

Domonique Rodriguez went 1-for-2 for Legacy.

Las Vegas 7, Silverado 5 — At Las Vegas High, the Wildcats scored six runs in the bottom of the fifth inning to hold off the Skyhawks.

Midijah Chavira and Kaitlyn Horstdaniel drove in runs for the Wildcats, and Nicole Forrest went 3-for-4 with a double.

Megan Thomas went 2-for-4 Silverado, which scored four runs in the top of the seventh inning.

Bonanza 17, Spring Valley 10 — At Spring Valley, Reyna Enriquez and Sara Riley each went 3-for-6 with three RBIs as the Bengals out-slugged the Grizzlies.

Enriquez doubled and scored three runs, and Riley had two doubles and a run for Bonanza, which scored seven runs in the top of the seventh to take a 17-7 lead.

Spring Valley’s Tegan Teal went 4-for-4 with three runs and an RBI. Chryshelle Abril-Ryan was 3-for-4 with two runs and two RBIs, and teammate Talya Ushakoff went 2-for-5 with a double and three RBIs for the Grizzlies.

Samantha Lawrence went 2-for-4 with a double and an RBI for Centennial, and Amanda Sink struck out 11 to pick up the win.

Nikki LaBounty had a double and an RBI for Cimarron.

Coronado 14, Liberty 2 — At Liberty, Tatum Spangler struck out 13 in a five-hitter as the Cougars routed the Patriots.

Cali Christopher tripled and knocked in two for the Patriots, and teammate McKenzie Hamilton was 2-for-3.

Shadow Ridge 17, Arbor View 2 — At Arbor View, Alisha Schultz was 4-for-5 with a double, three RBIs and two runs to power the Mustangs past the Aggies.

Mia Voges and Jasmine Martin each supplied three hits for Shadow Ridge, which got two doubles from Alyssa Stanley. Voges earned the win with eight strikeouts.

Sierra Vista 16, Clark 1 — At Sierra Vista, Hola Rosalia Nakayama went 2-for-3 with a double, a home run and five RBIs as the Mountain Lions beat the Chargers in three innings.

Taylore Edwards was 3-for-3 with two doubles, a run and an RBI for Sierra Vista.

Durango 17, Bishop Gorman 0 — At Gorman, Alexis Geraldo hit a grand slam to highlight a 10-run first inning as the Trailblazers routed the Gaels.

Geraldo finished 2-for-3 for Durnago, which had 10 hits.

Pahranagat Valley 16, Sunrise Mountain 0 — At Sunrise Mountain, Emily Hansen was 3-for-4 with a walk and a grand slam, as the Panthers routed the Miners in four innings.

Alyssa Guevara-Canales had a walk and Sunrise Mountain’s lone single.

The Meadows 20-26, Democracy Prep 3-7 — At The Meadows, Sheen Kim had three hits in the opener and drove in four runs in the nightcap as the Mustangs swept a pair of three-inning games from the Blue Knights.

Korinne Oder had three hits and three RBIs for The Meadows in the first game, and teammate Bentley Jimmerson added two hits and two RBIs.

Julianne Capp tossed a four-hitter and struck out for the Mustangs in the opener.

In the second game, the Mustangs scored 17 runs in the first inning. Lenae Joe had three hits, and Hallie Monkarsh and winning pitcher Mercedes Moore each added two hits for The Meadows.

Moore allowed three hits and struck out five in the finale for the Mustangs.

Indian Springs 23, Mountain View 8 — At Indian Springs, Hailey Butler was 2-for-2 with four RBIs as the Thunderbirds out-slugged the Saints in three innings.

Faith Prine went 2-for-2 with a double and two RBIs for Indian Springs, which scored 11 runs in the first.

Julia Sevilla had a two-run single for Mountain View.