If you are having problems accessing today’s e-Edition, please click on this link VIEW E-EDITION
Las Vegas Review-Journal
April 30, 2020 - 8:05 am 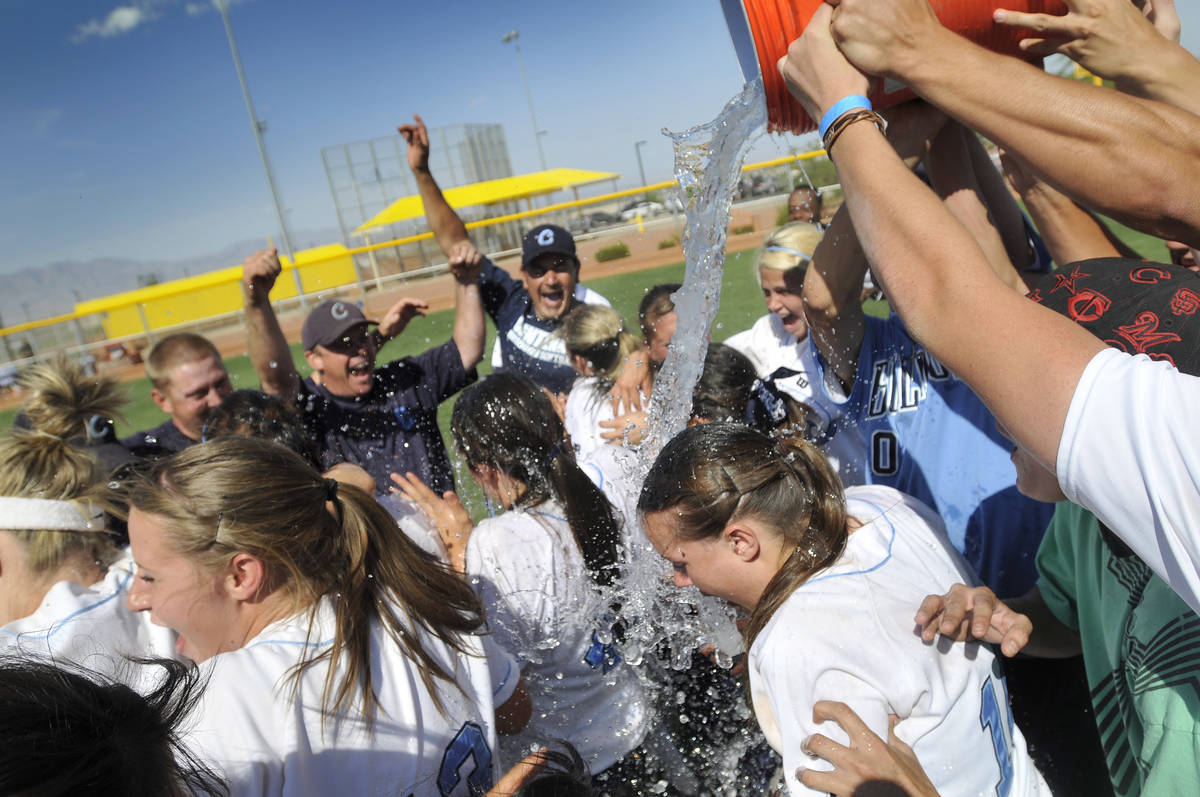 Centennial High School softball team members get doused with ice water by fans as the celebrates after winning the Nevada State 4A softball championship against Reed High School at Majestic Park in Las Vegas on Saturday, May 23, 2009. (Las Vegas Review-Journal file) 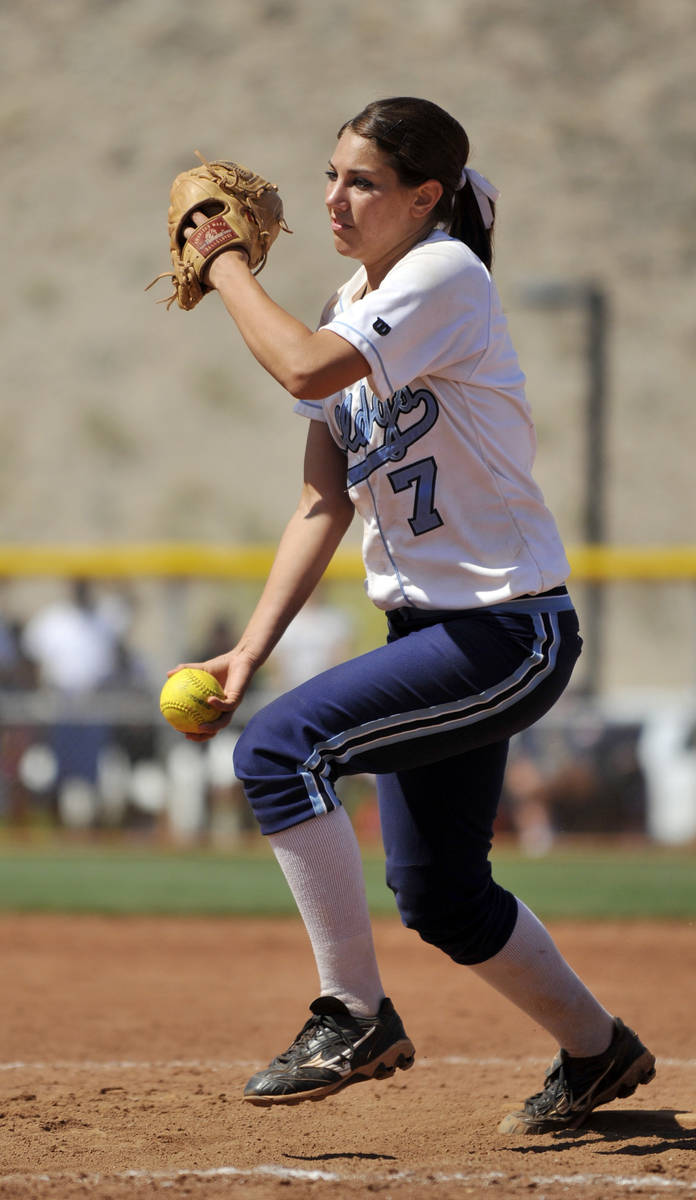 Centennial High School's Jennifer Watkins readies her pitch during the during the Nevada State 4A softball championship against Reed High School at Majestic Park in Las Vegas on Saturday, May 23, 2009. (Las Vegas Review-Journal file) 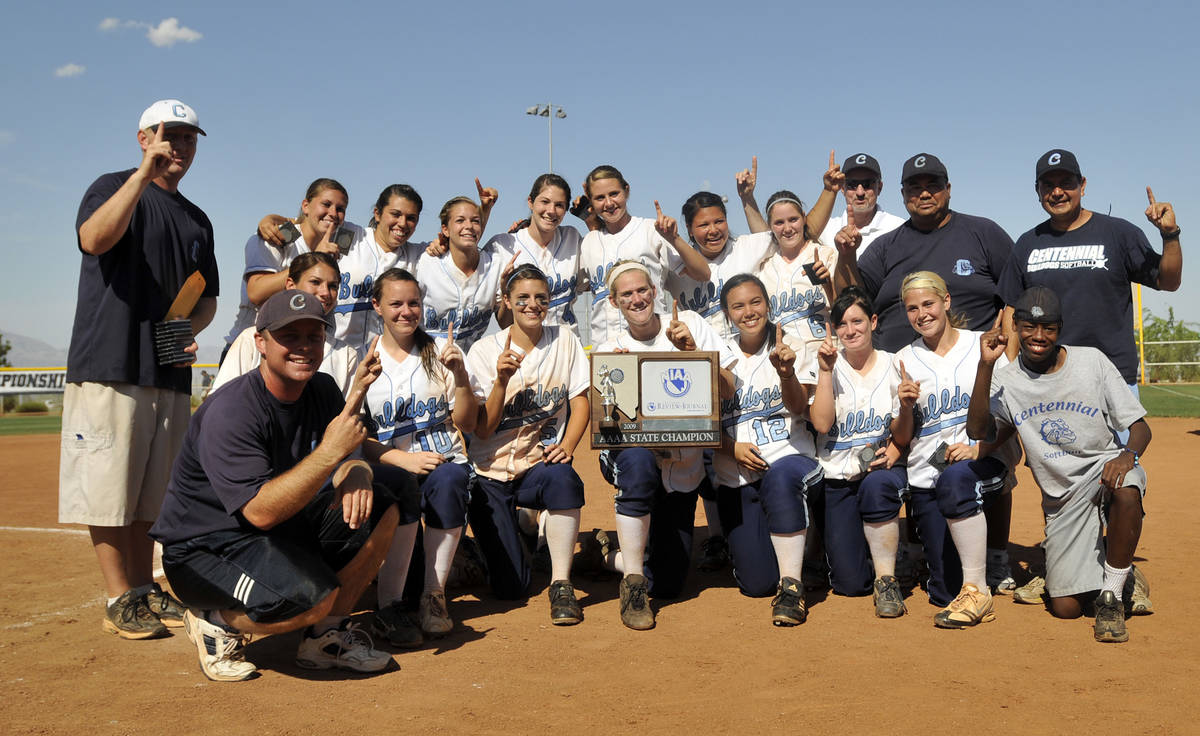 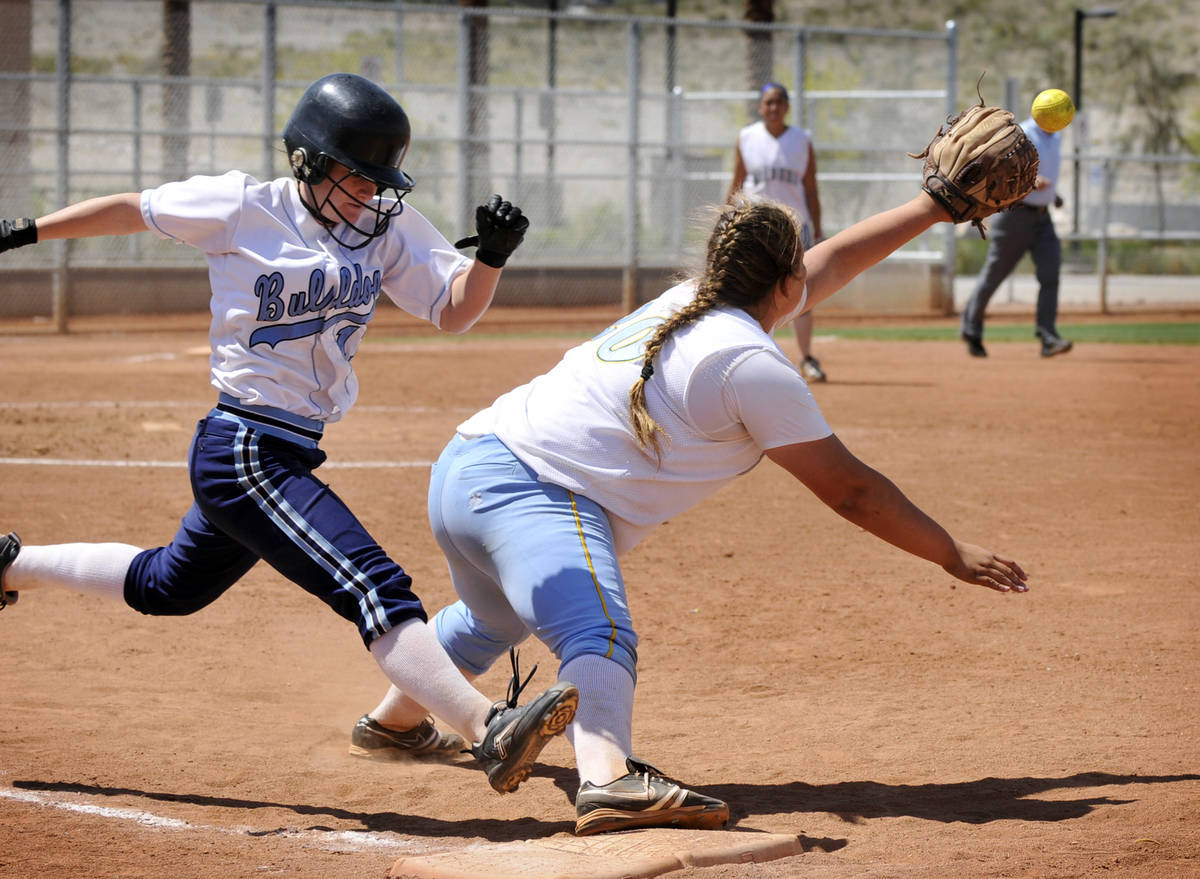 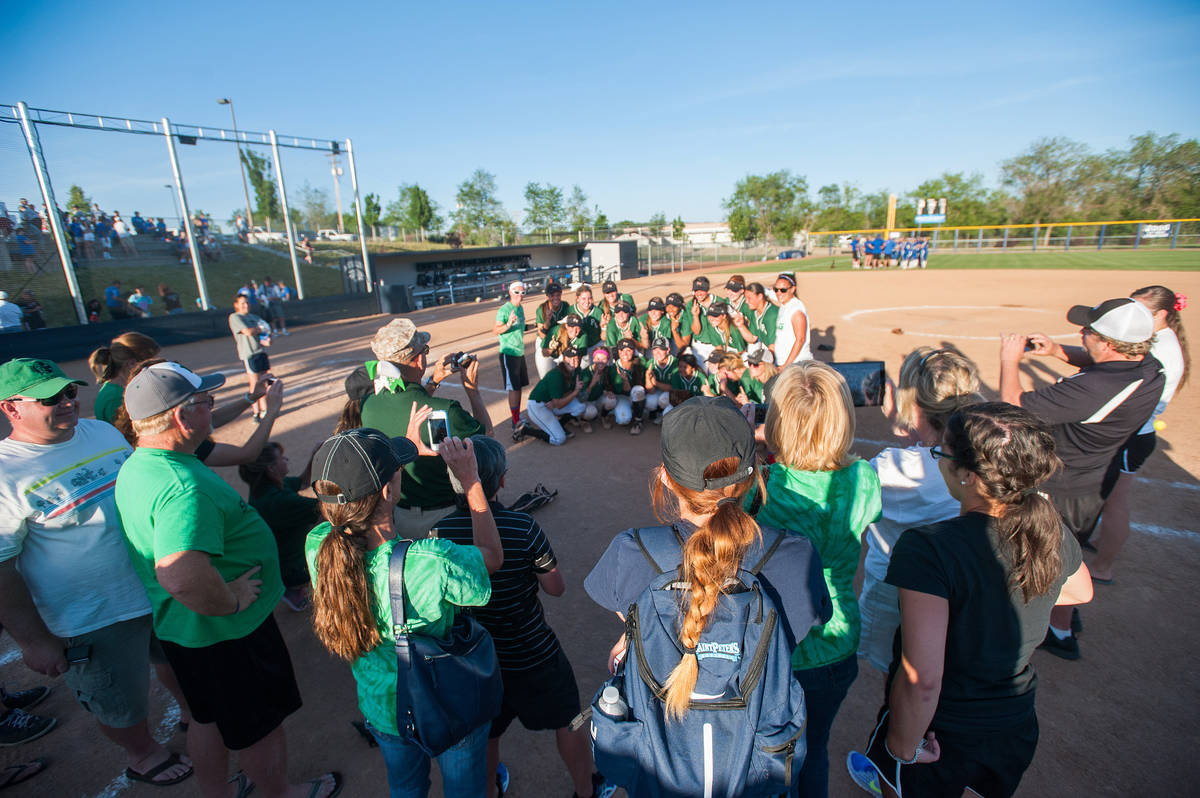 Palo Verde players pose for photos from family members after the team defeated Reed in the second game of the Division I state softball final tournament at the University of Nevada, Reno's Hixson Park in Reno, Nev. on Saturday May 24, 2014. Palo Verde won the game 12-8 to win the state title. (Kevin Clifford/Special to the Review-Journal) 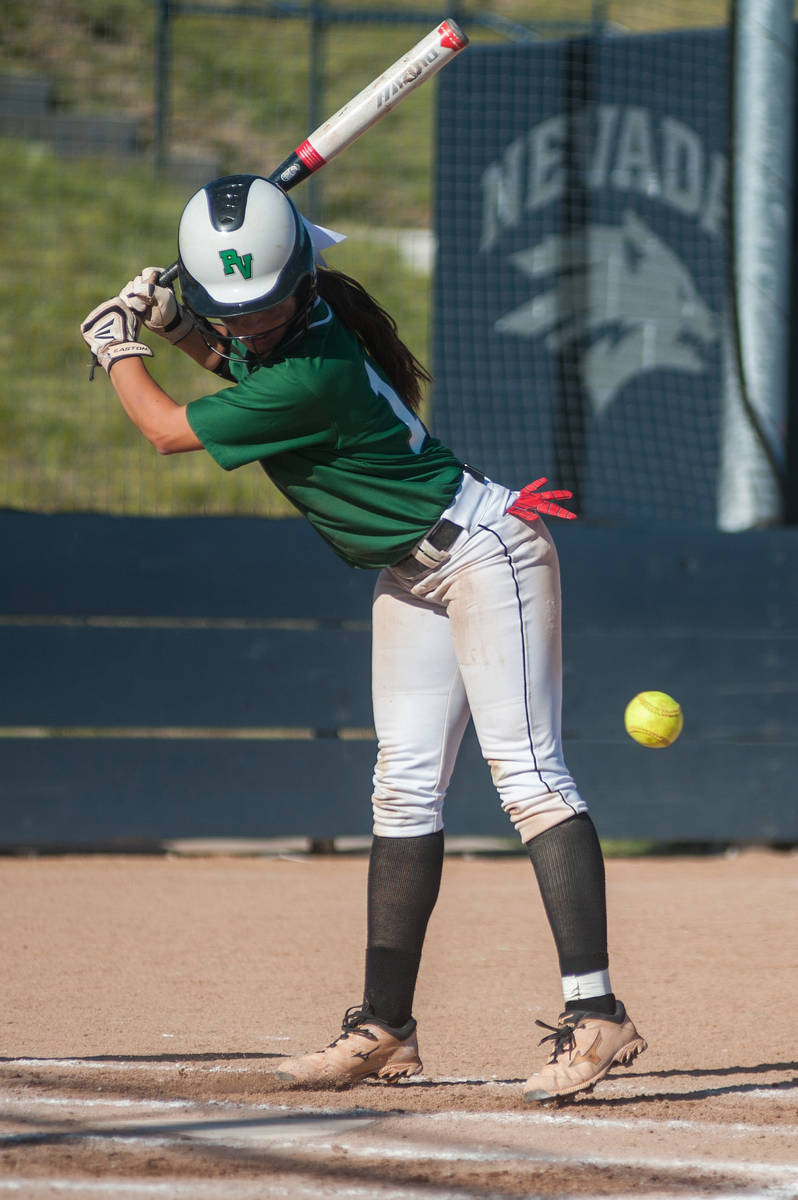 Palo Verde's Haley Harrison dodges a close pitch while playing against Reed in the deciding game of the Division I state softball tournament on Saturday. Palo Verde won the game 12-8 to win the state title. (Kevin Clifford/Special to the Review-Journal) 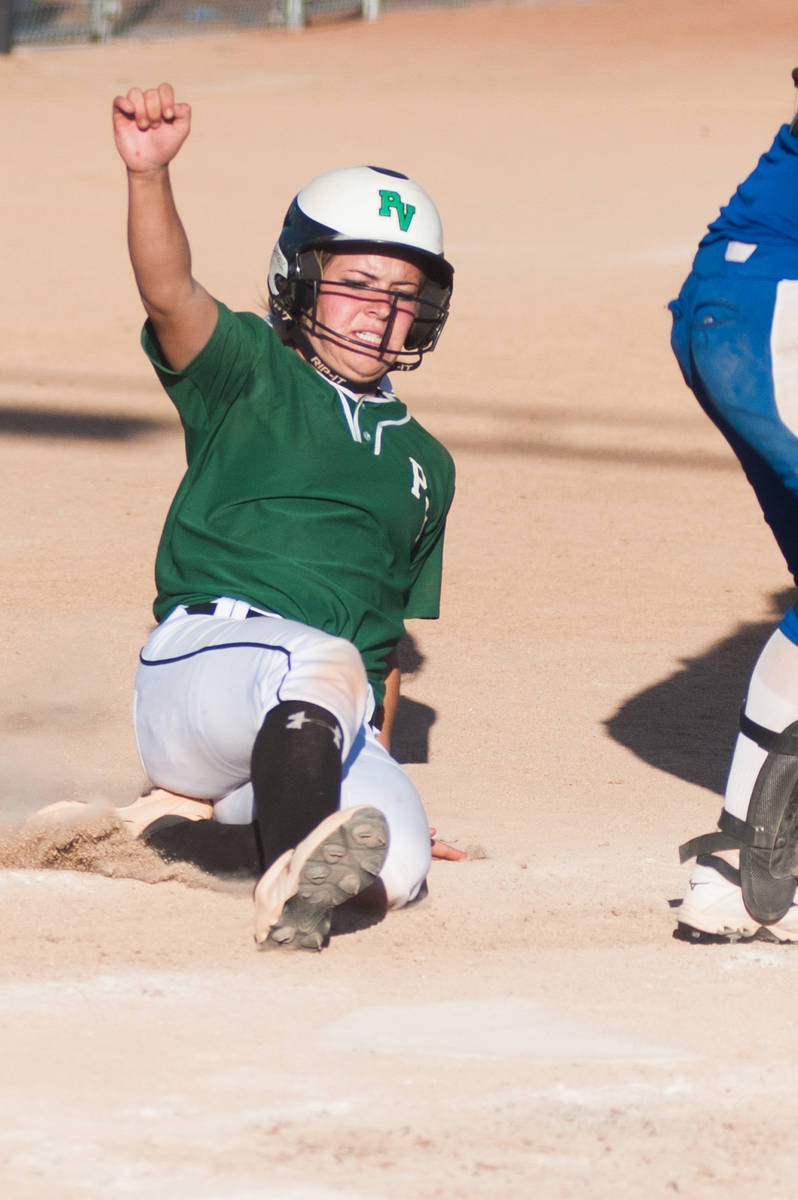 Palo Verde's Jordan Menke slides home and scores against Reed in the deciding game of the Division I state softball tournament on Saturday. Palo Verde won the game 12-8 to win the state title. (Kevin Clifford/Special to the Review-Journal) 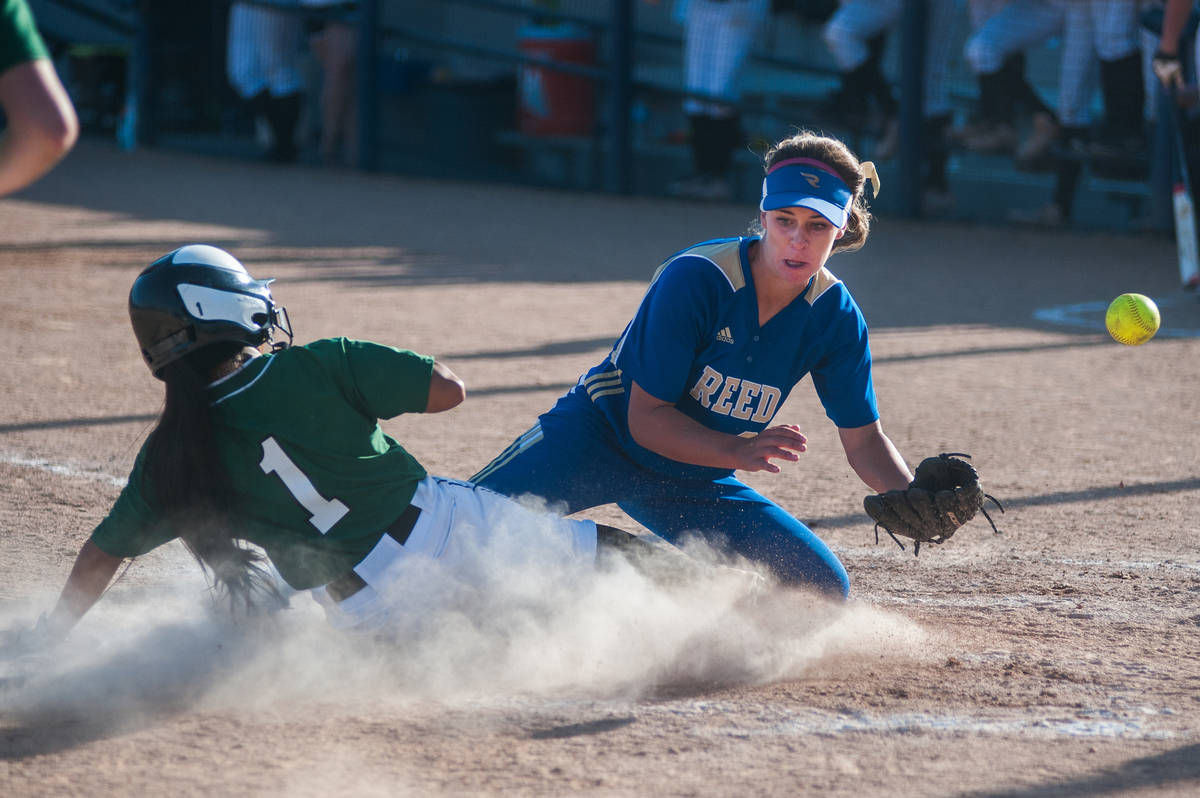 Palo Verde's Melissa Lacro slides home and scores as Reed's Jessica Sellers waits for the throw in the deciding game of the Division I state softball tournament on Saturday. Palo Verde won the game 12-8 to win the state title. (Kevin Clifford/Special to the Review-Journal) 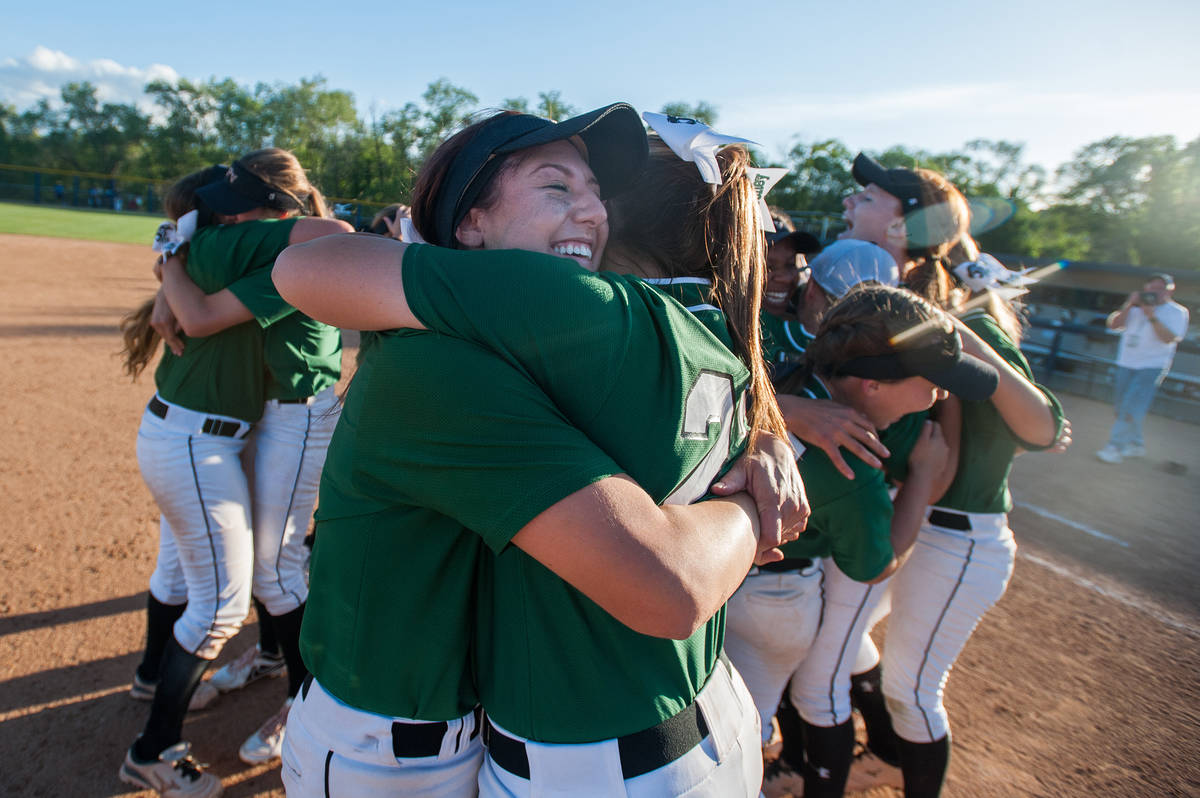 alo Verde's Kelsea Sweeney, right, and Rachel Williams hug after their team defeated Reed 12-8 to capture the Division I state softball title on Saturday. (Kevin Clifford/Special to the Review-Journal) 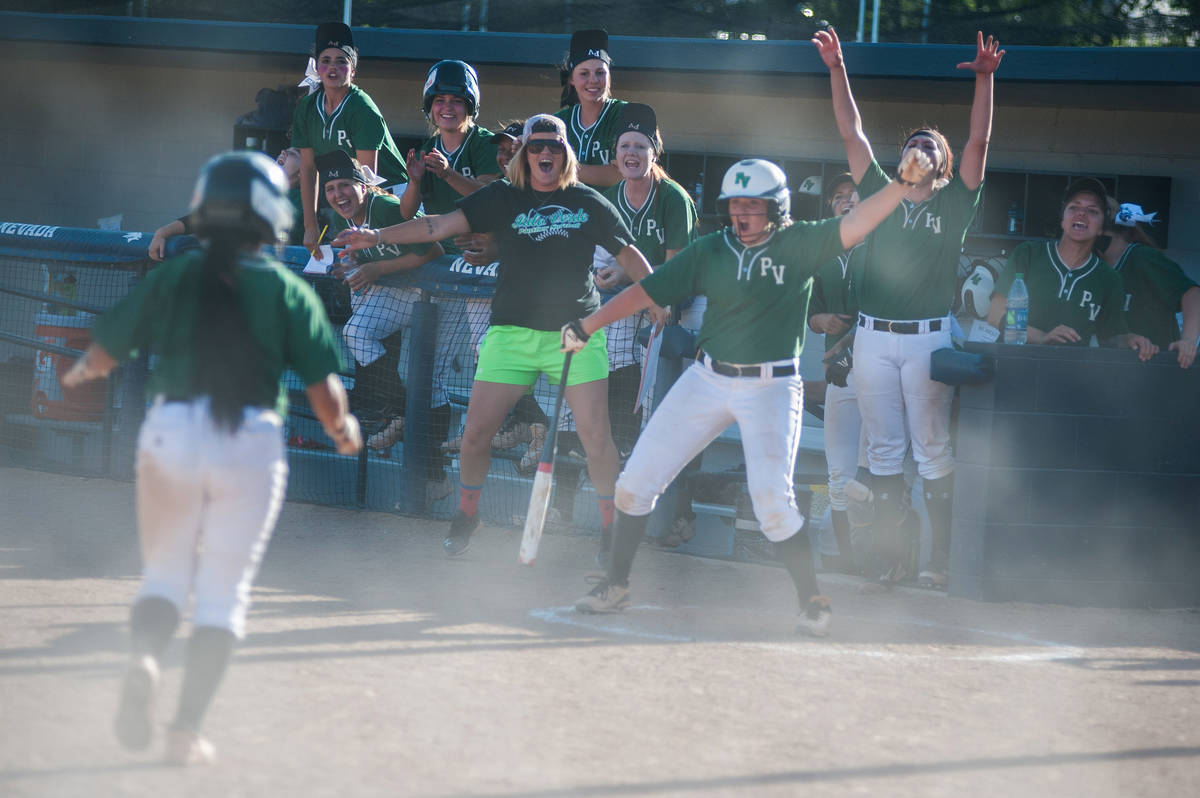 Palo Verde's Melissa Lacro runs through dust to her dugout after scoring against Reed in the deciding game of the Division I state softball on Saturday. Palo Verde won the game 12-8 to win the state title. (Kevin Clifford/Special to the Review-Journal)

Fifth in a series: Here are the top five high school state softball championship games from the 2000s, as selected by the Review-Journal staff. Saturday: baseball.

Senior Brittany Patt scored on a passed ball with two outs in the bottom of the 10th inning to give the Eagles their first state title since 1999.

With snow flurries occasionally falling, Patt singled with two outs and moved to third on Ali Rants’ double. She then raced home when Dayton’s catcher couldn’t handle a pitch.

“The girls were making fun of me because I never slide, so they pummeled me,” Patt said. “This moment is amazing.”

Junior Kaden Cable blasted a walk-off three-run homer to left field with two outs in the eighth inning to give the Trojans their first state title since 2005.

Cable, Pahrump’s No. 9 hitter, was 4-for-4 with seven RBIs and scored the tying run in the seventh. Pahrump trailed 10-7 entering the inning.

Kareena Nelson reached on an error to start the bottom of the eighth for Pahrump. With two outs, Hailey Cuellar drew a walk, setting the stage for Cable.

“I knew it was my pitch, but I had no idea it was going to be a home run,” Cable said. “I could not believe it. I was hysterical.”

Vivian Quiroz-Montano looped an RBI single into short left-center with two outs in the bottom of the ninth inning, scoring Michaela Hood with the winning run and giving the Grizzlies their only softball state crown.

Boulder City took advantage of three errors to take a 5-3 lead in the ninth.

“I wasn’t looking for a home run; I was looking for something where (Michaela) could get home,” said Quiroz-Montano, a junior catcher. “It was amazing, the most amazing feeling in the world.”

Down to its No. 4 pitcher because of injuries and illnesses, Palo Verde found a way to win its second state title in four years.

After losing a potential clinching game to Reed 11-7, the Panthers turned to senior second baseman Melissa Lacro to start the decisive game. Lacro, who had pitched only four innings all season, navigated her way through five innings and also hit a three-run triple in a seven-run fifth.

“I knew there was a chance that I was going to have to pitch this game,” Lacro said. “I just kept believing I could do it.”

Two-out singles in the sixth by McKenzie McBride and Lacro broke an 8-8 tie and gave Palo Verde the lead for good.

Rachel Williams, who battled shoulder problems throughout her high school career and threw 145 pitches in the first game of the day, pitched the final two innings for the Panthers.

“(Lacro) hasn’t pitched in three months. For her to take the ball and do what she did …,” Palo Verde coach Kelly Glass said. “Rachel has worked through so much, and she’s grown up a lot.”

Kylie Bartlett’s two-out, two-run double to left center in the top of the 11th inning broke a 4-4 tie, and Jennifer Watkins threw a complete-game eight-hitter as the Bulldogs won their first state title since 2004.

Centennial, which lost the potential title-clinching game 7-1, took a 4-1 lead in the eighth inning of the decisive game before the Raiders’ Kristi Pasley crushed a two-out, three-run homer to tie the score.

Sarah Cudahy’s two-out single on an 0-and-2 pitch and Paige Reese’s infield single set the stage for Bartlett, who fouled an 0-and-1 pitch behind the plate, but Reed’s catcher dropped the ball to give the Bulldogs another chance.

Katie Lee tacked on an RBI single for Centennial, and Watkins retired the side on five pitches in the bottom of the inning.

“We rose from the dead a lot this year,” Centennial coach Mike Livreri said. “We kept believing in ourselves.”