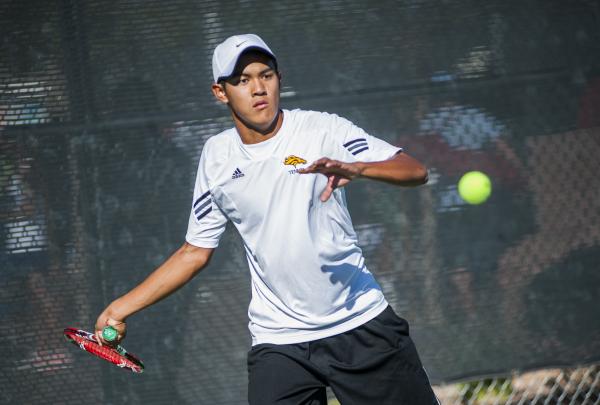 “And I’m not even talking about tennis,” Chun said.

For his efforts, Pasimio has been named the small-school Boys Tennis Player of the Year as part of the Las Vegas Review-Journal’s Fall Athletes of the Year.

“He’s like the steady force,” Chun said. “He definitely has a lot of humility. You see tennis players on the court with a lot of ego because they know they’re great. He’s more like a (Rafael) Nadal or a (Roger) Federer type. He knows he’s good, but he doesn’t have to advertise it.”

As a freshman, Pasimio played a key role on the team that captured Clark’s first state team title since 1979. This season, he went undefeated at No. 1 singles for the Chargers, who finished 17-0 and are riding a 35-match winning streak.

Pasimio lost three games in four singles matches at the Southern Region tournament and dropped only six games in the state tournament.

“Although he’s a sophomore, a lot of players look to him as inspiration because he’s so consistent and steady,” Chun said. “He could play second or third (singles), and he wouldn’t care. That’s the kind of individual he is.”

The Chargers relied on Pasimio for victories at the top of their lineup this season, but his leadership was even more vital to the Chargers’ success, according to Chun.

Pasimio was known for his dry sense of humor at practice — “He would be serious and quiet and, all of a sudden, make you laugh,” Chun said — in addition to the way he interacted with teammates.

“He is a leader by action,” Chun said. “He created more of a team spirit by his action. He was very instrumental in the cohesiveness of the team. Just by talking to players, he would raise the level of other players.”

Chun said Pasimio’s greatest strength on the court is his consistency, and the Chargers’ coach expects that attribute to serve Pasimio well for the rest of his high school career.

“All the players look to him,” Chun said. “He’s definitely a great team player.”