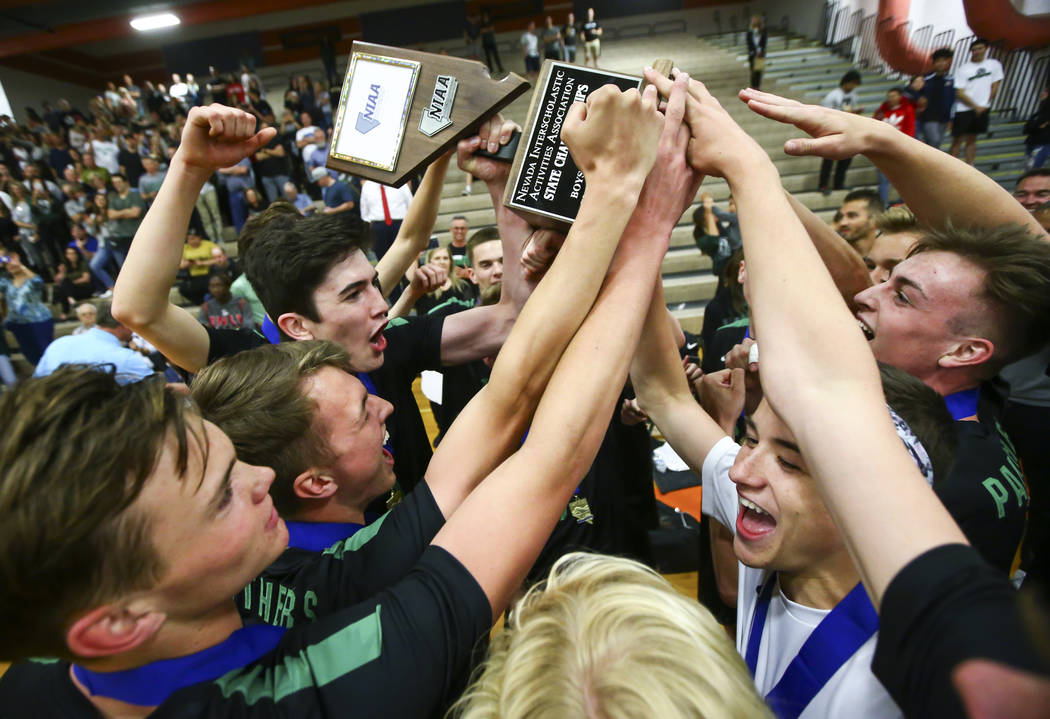 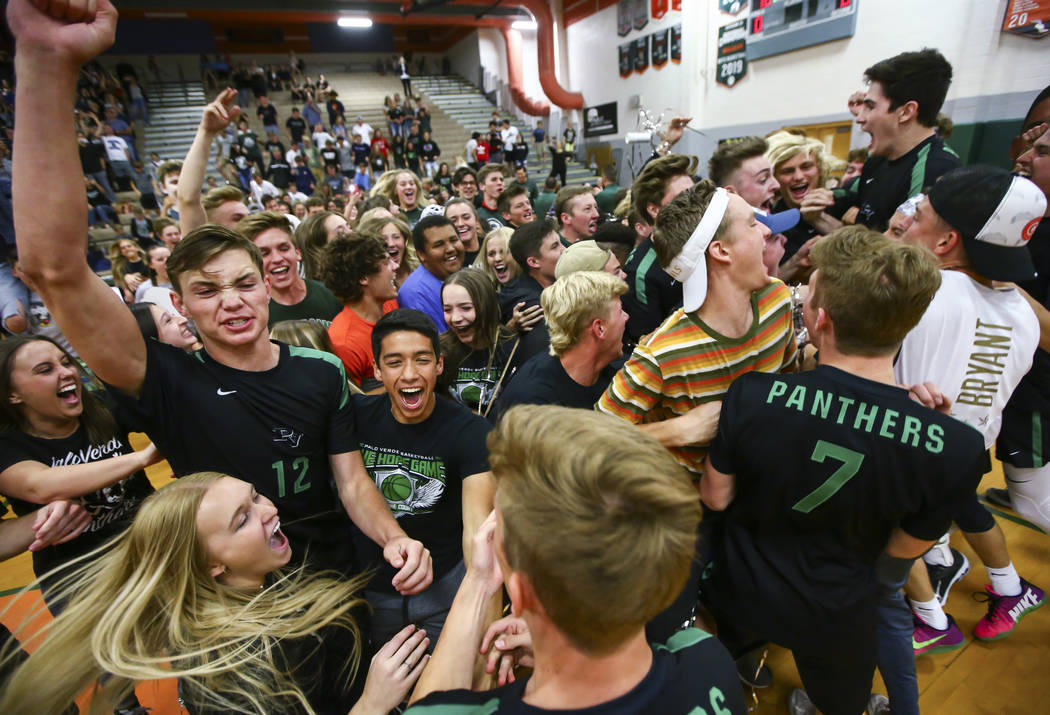 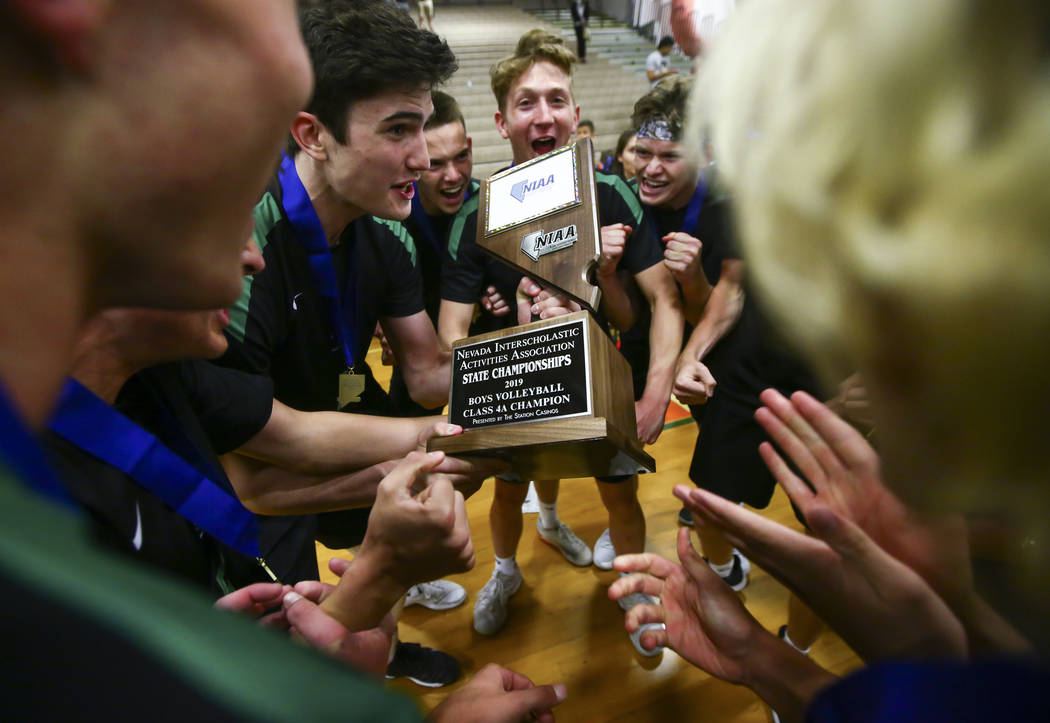 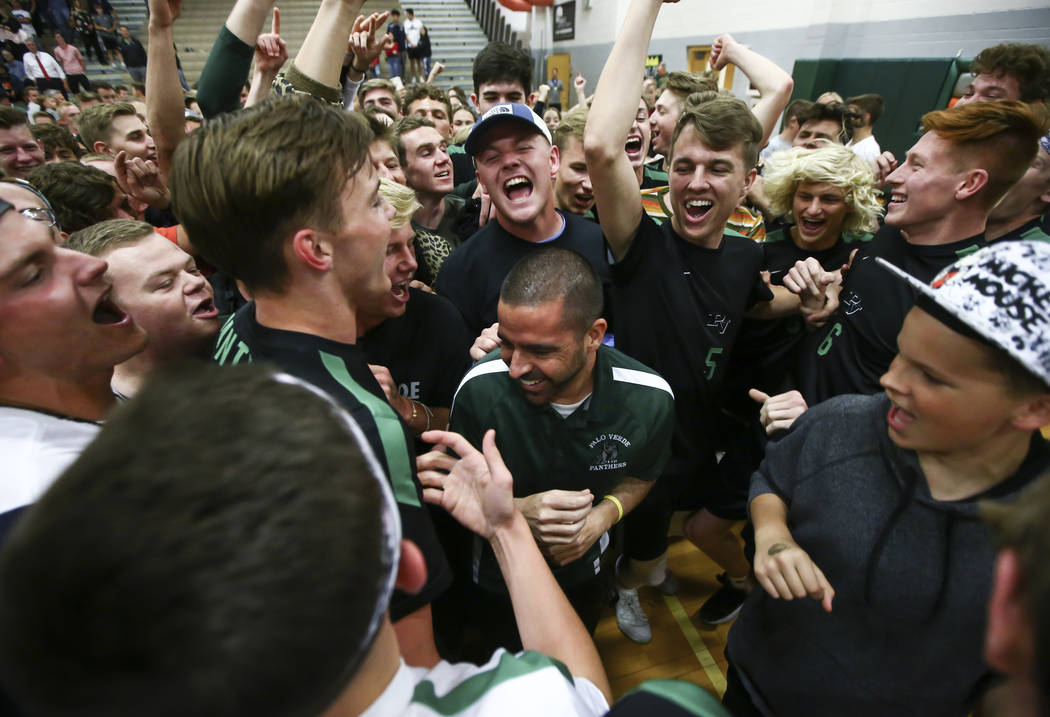 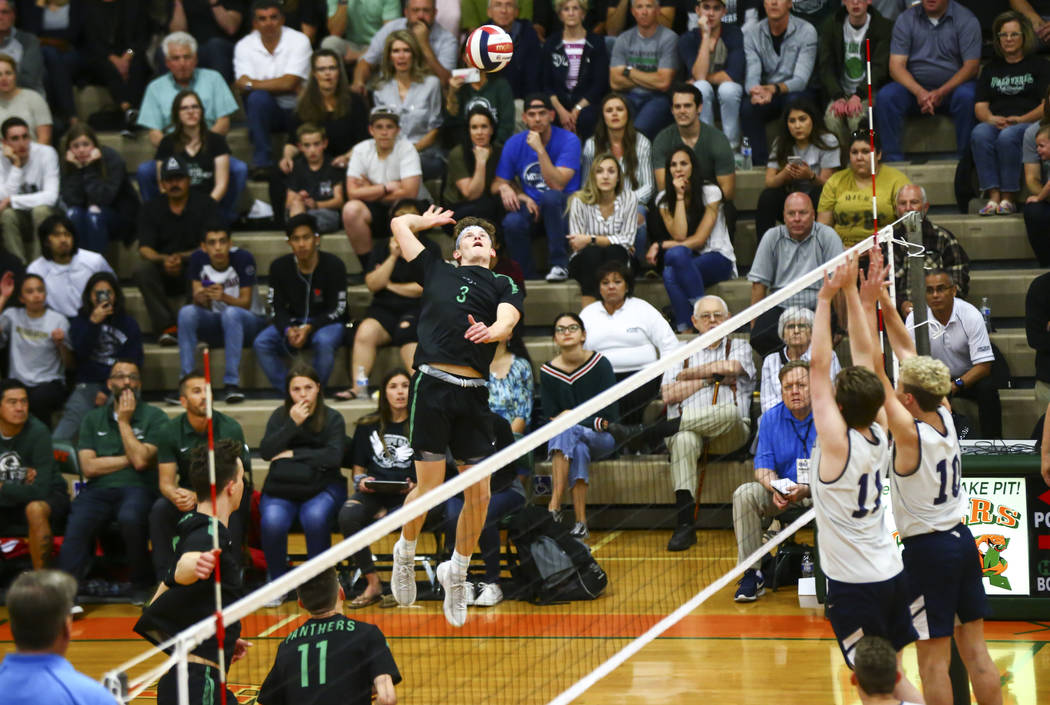 Palo Verde’s Kade Madsen (3) looks to send the ball over to Coronado during the Class 4A state volleyball championship game at Mojave High School in North Las Vegas on Thursday, May 16, 2019. (Chase Stevens/Las Vegas Review-Journal) @csstevensphoto 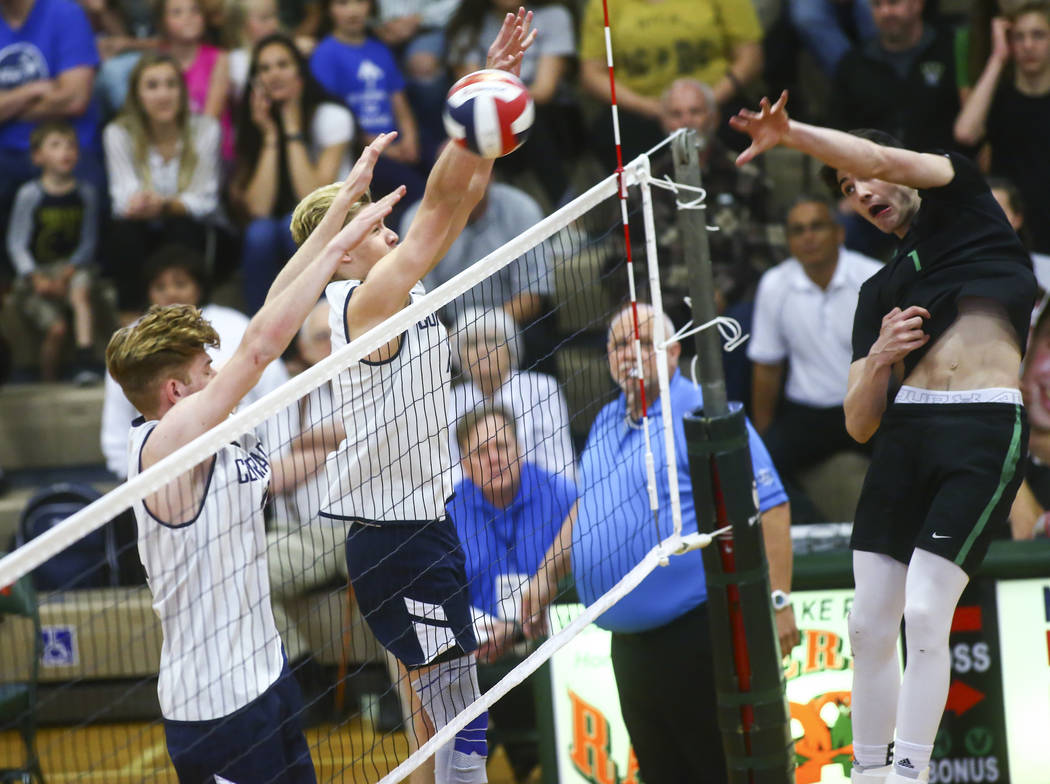 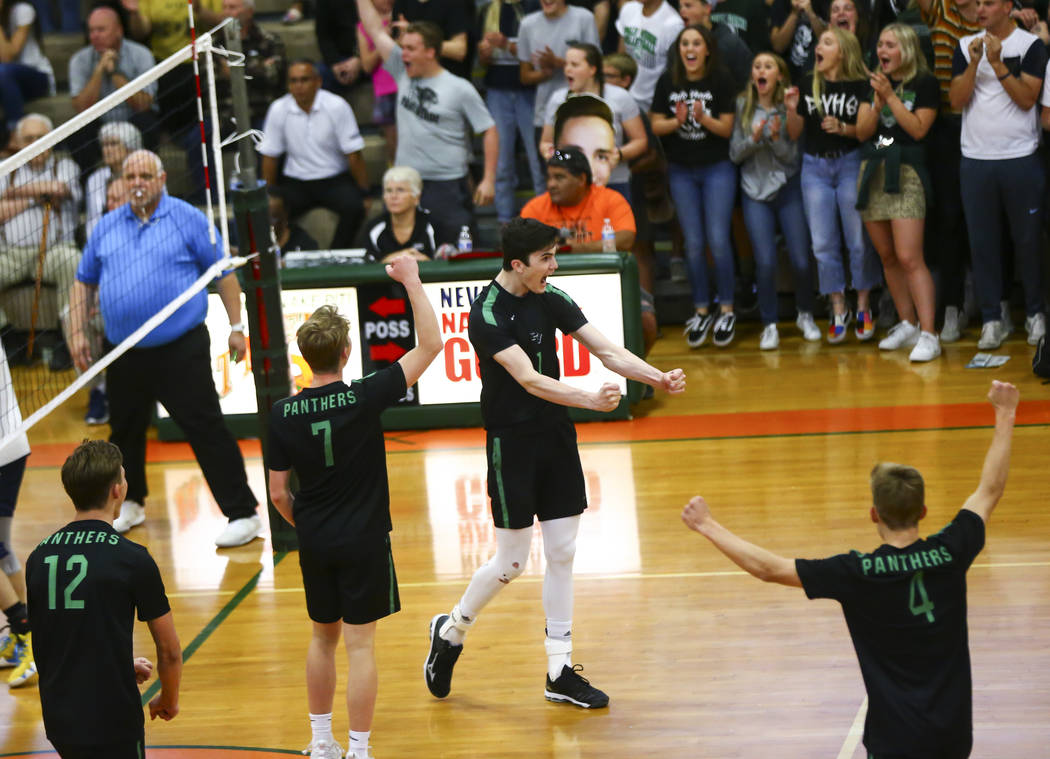 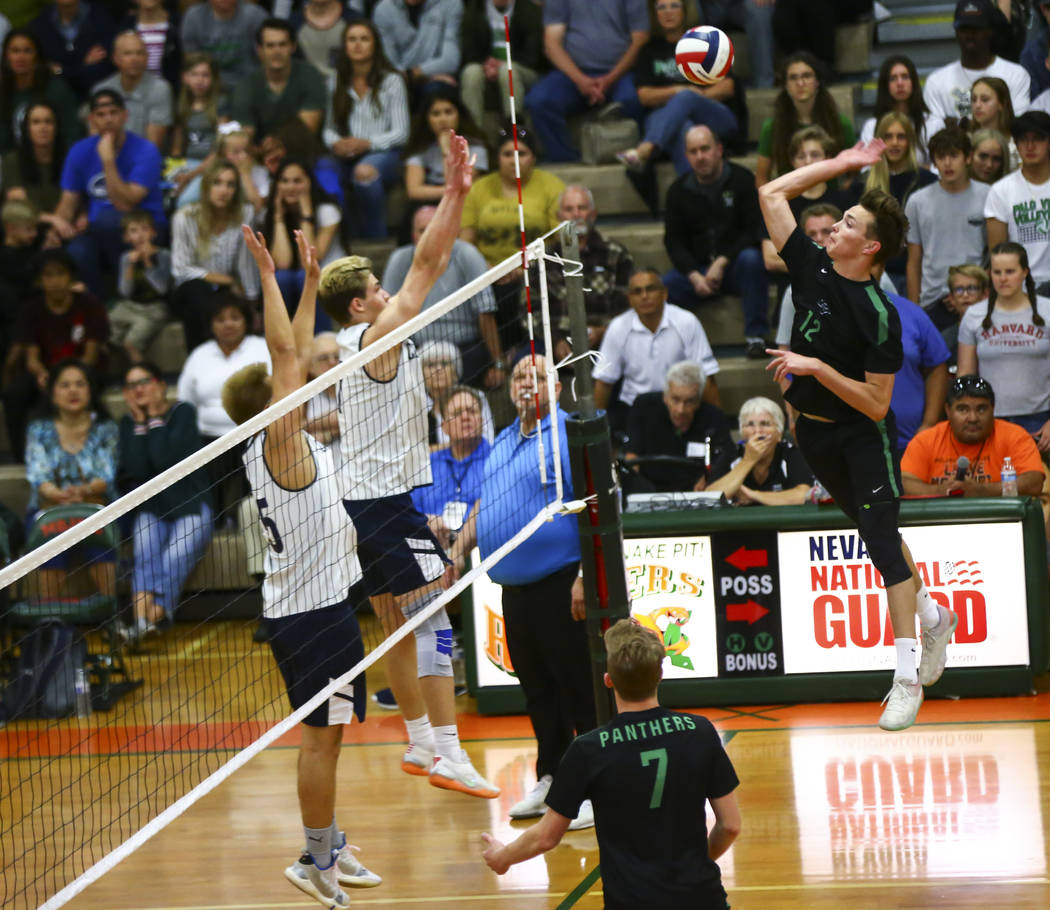 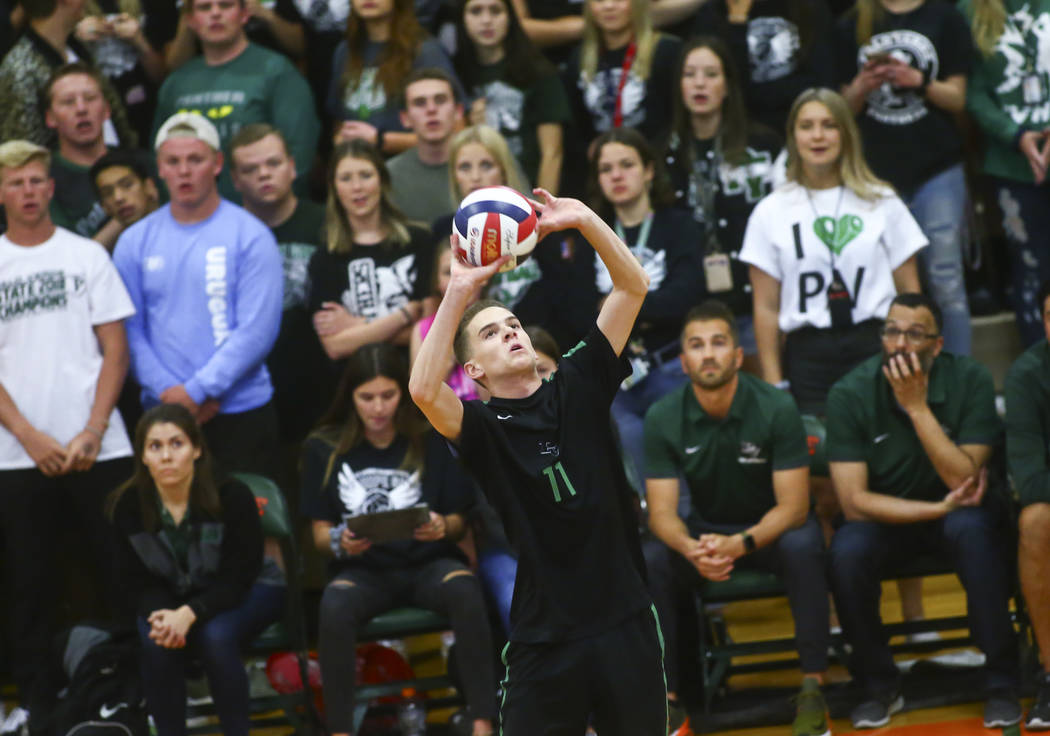 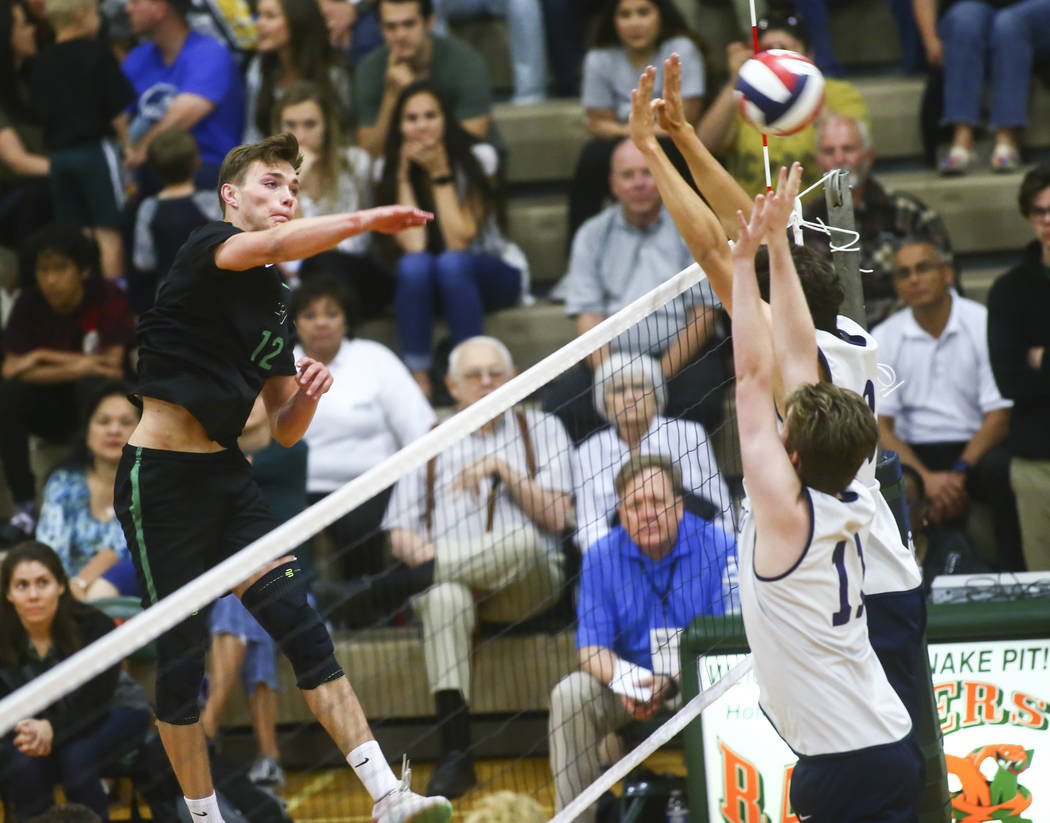 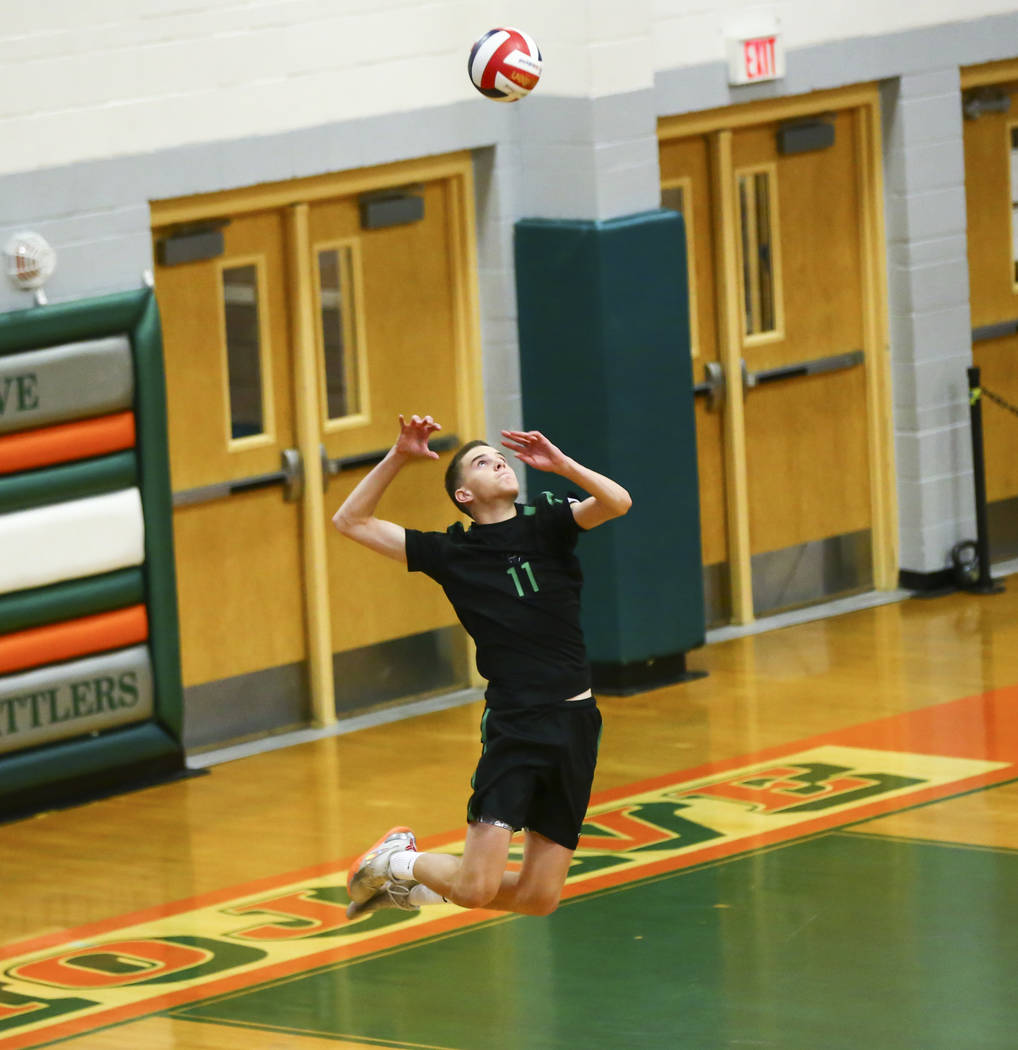 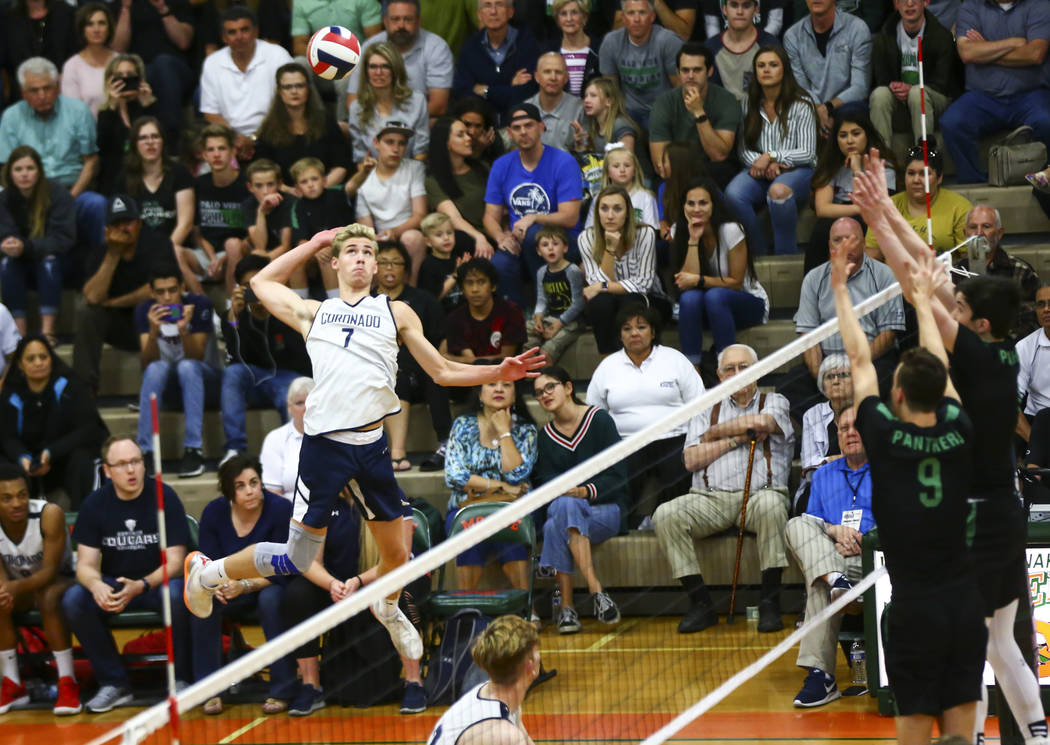 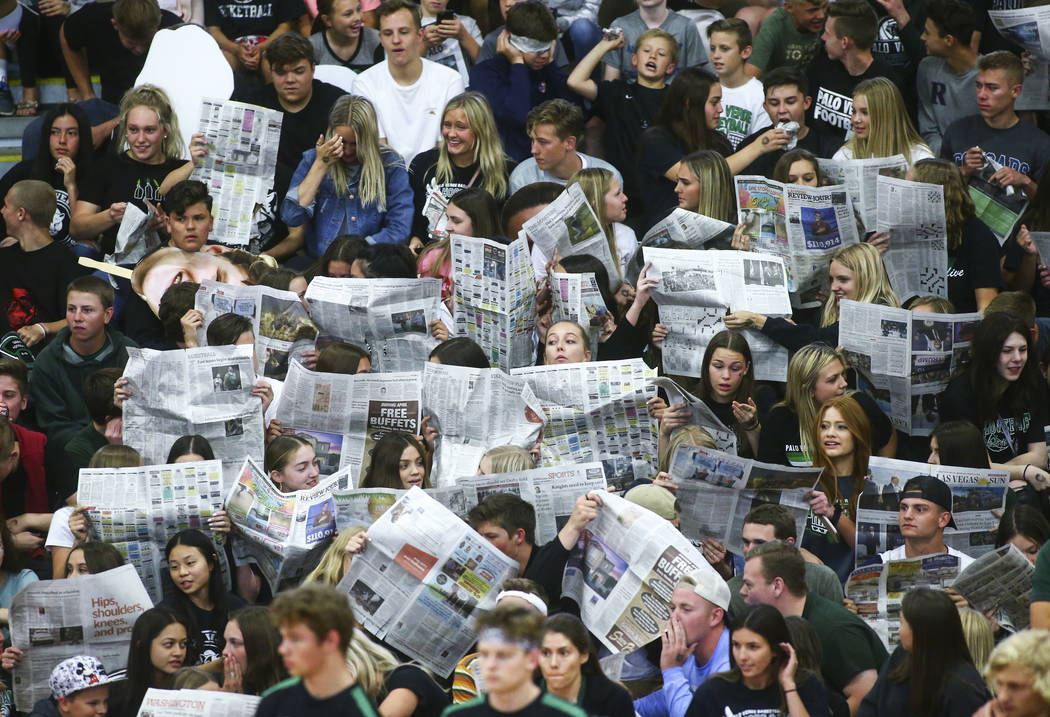 Palo Verde students hold up newspapers as Coronado players are introduced at the start of the Class 4A state volleyball championship game at Mojave High School in North Las Vegas on Thursday, May 16, 2019. (Chase Stevens/Las Vegas Review-Journal) @csstevensphoto 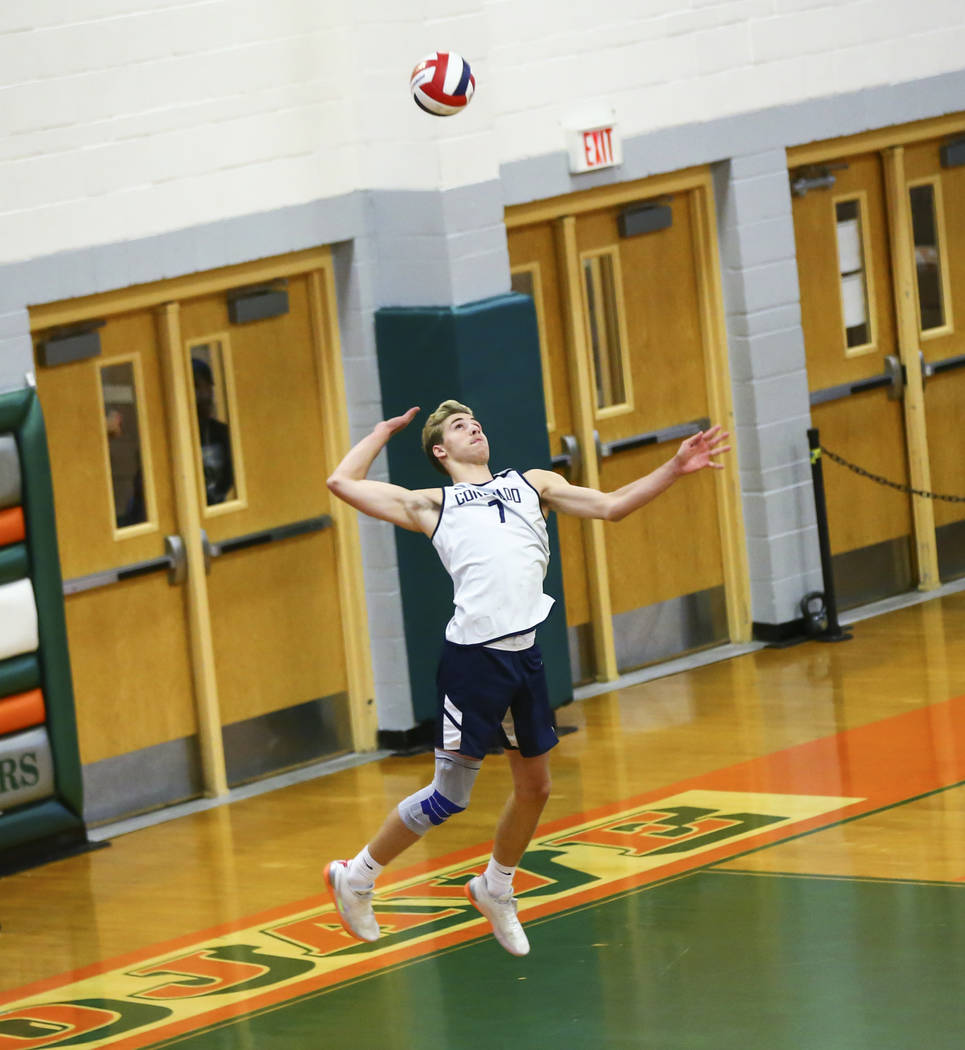 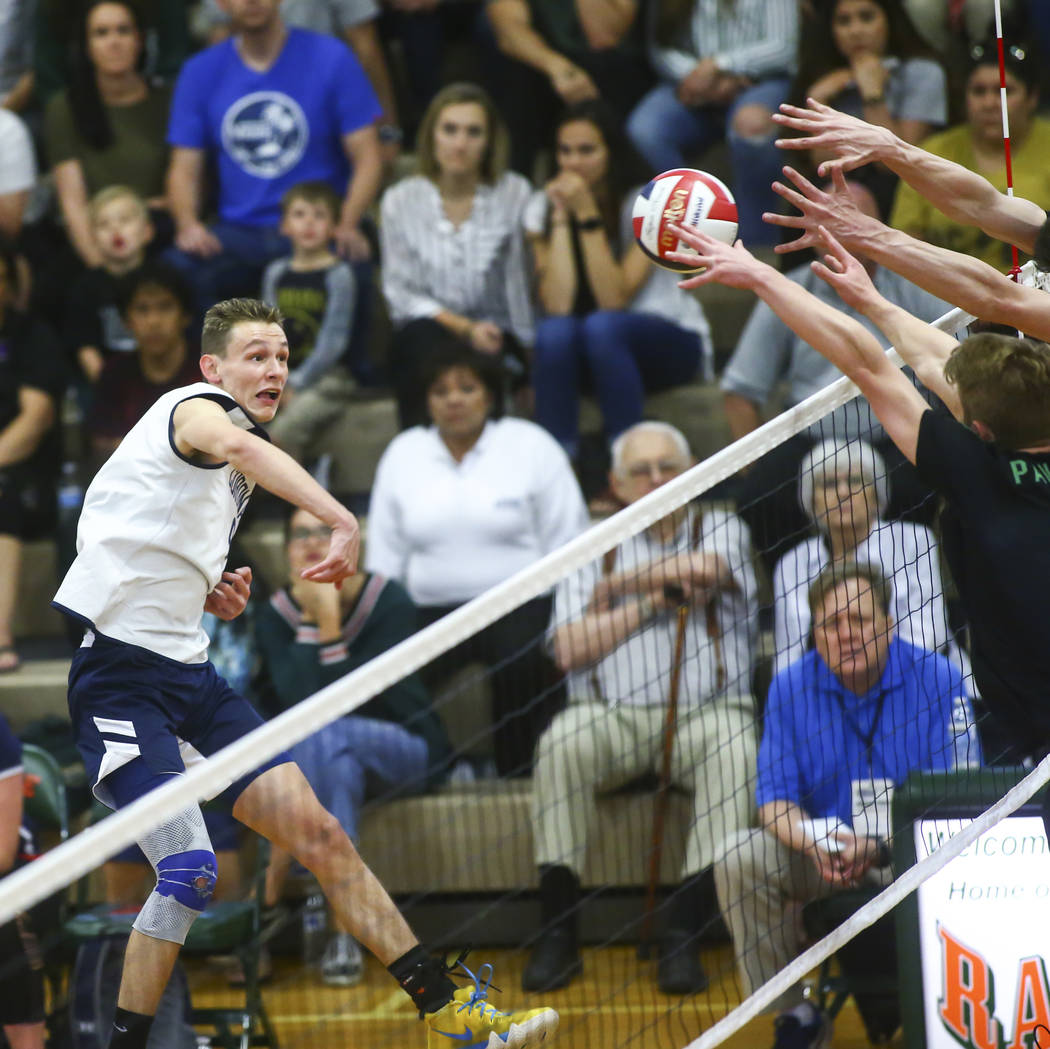 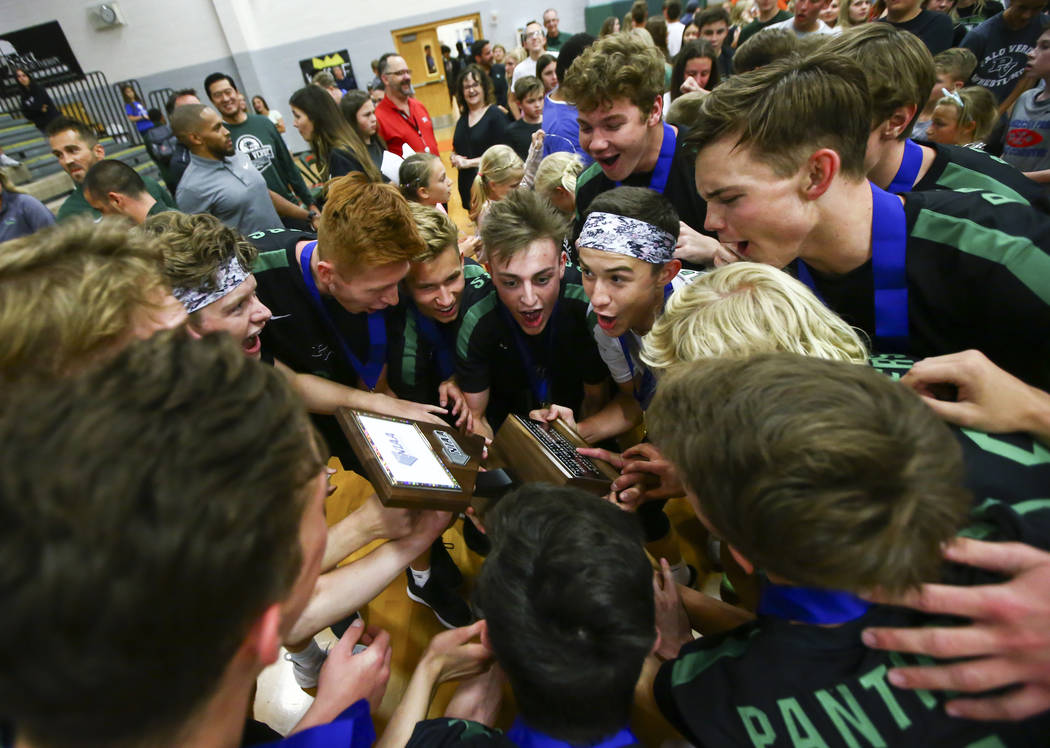 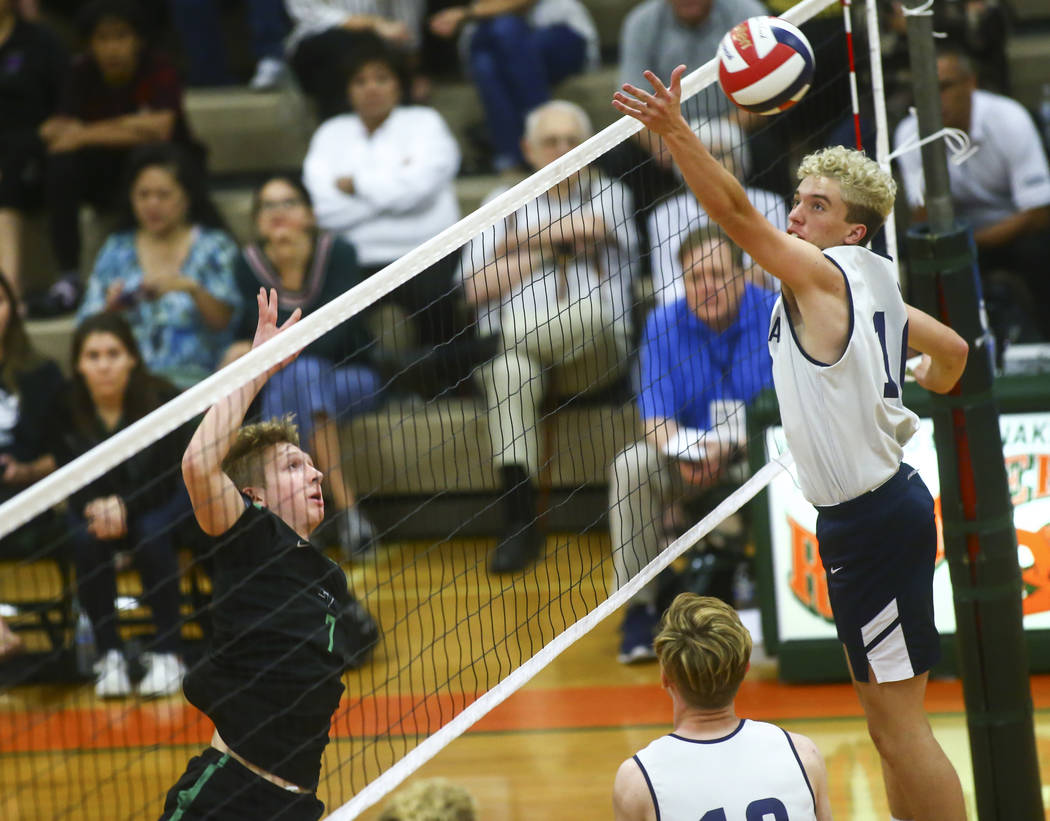 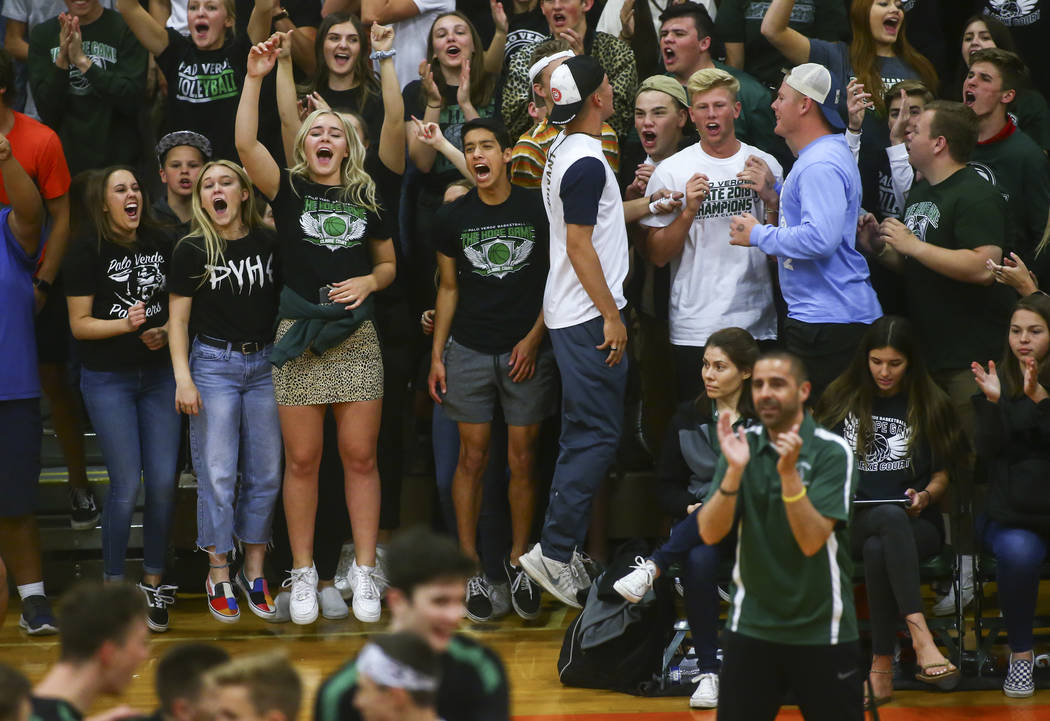 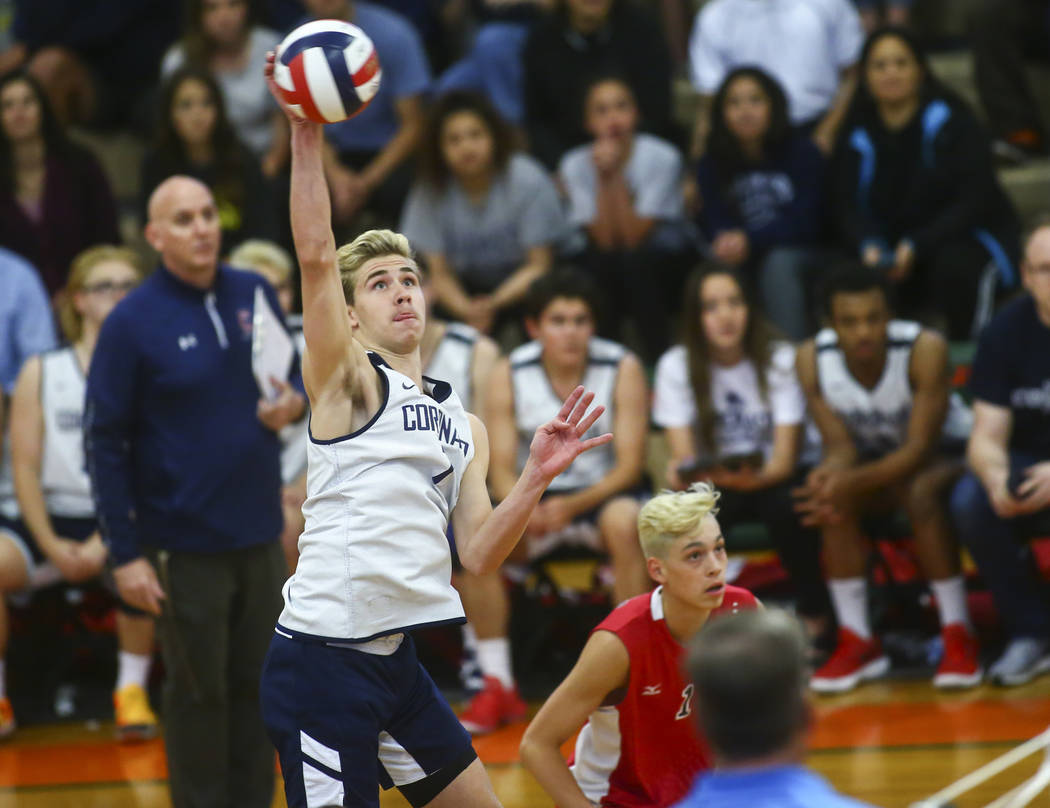 Scott Solan’s return to Palo Verde’s lineup made the Panthers a preseason favorite to win the Class 4A boys state volleyball title.

The Pepperdine commit made a championship a certainty Thursday night.

Solan, a senior opposite hitter, had 13 kills, six digs and three aces as the Panthers rolled to a 25-15, 25-19, 25-16 victory over Coronado to win the program’s fifth state championship.

“It was a lot of grinding this season, and everybody working together as a unit and everyone playing their role,” said Solan, who didn’t play high school volleyball last year. “Any time everybody is contributing, it makes the game flow, and we were able to reach our goal.

“Everything is for my teammates. I don’t like to look at anything from a personal level. My teammates were there through ups and downs with me, and we stayed together through the whole season.”

“I personally don’t think he gets enough credit,” Clarke said. “He got so much abuse this year from the crowds. I’ve been doing this a long time, and you tell me if you’ve ever seen someone get booed at an awards ceremony. That’s what they did. That’s what him and this group had to deal with all year long. …

“The only people who say stuff about him are ones who have no idea who he is. He is a very humble kid, works his butt off. He has earned and deserves every recognition that he gets. I told him that was the most fun I’ve seen him have all year long. I’m so glad for everyone, but especially for him to finish out that way.

Coronado rallied in the third set, until an Evan Hartshorn kill kicked off a 4-0 run to push the Panthers ahead 18-14. After the Cougars cut the score to 18-16, the Panthers reeled off seven straight points to close out the match.

“This group, with the experiences that they’ve had, looked at point one or point whatever in the third set with the same demeanor, and the same timing with kills,” Clarke said. “They didn’t get rattled. (Coronado) went on a couple runs, and our guys just always had an answer for it.”

Cooper Jarman had 37 assists for Palo Verde, and Brady finished with 13 kills and seven digs.

“It’s honestly a dream,” Brady said. “Two years ago, I sat on the bench and watched the seniors above me play, and I knew that’s what I wanted. It felt really good to come out here, give it our all and take the (win).”

Alex Winiarczyk had 10 kills and nine digs for the Cougars. Alex White dished out 24 assists, and Jacob Ceci had eight kills and two aces.