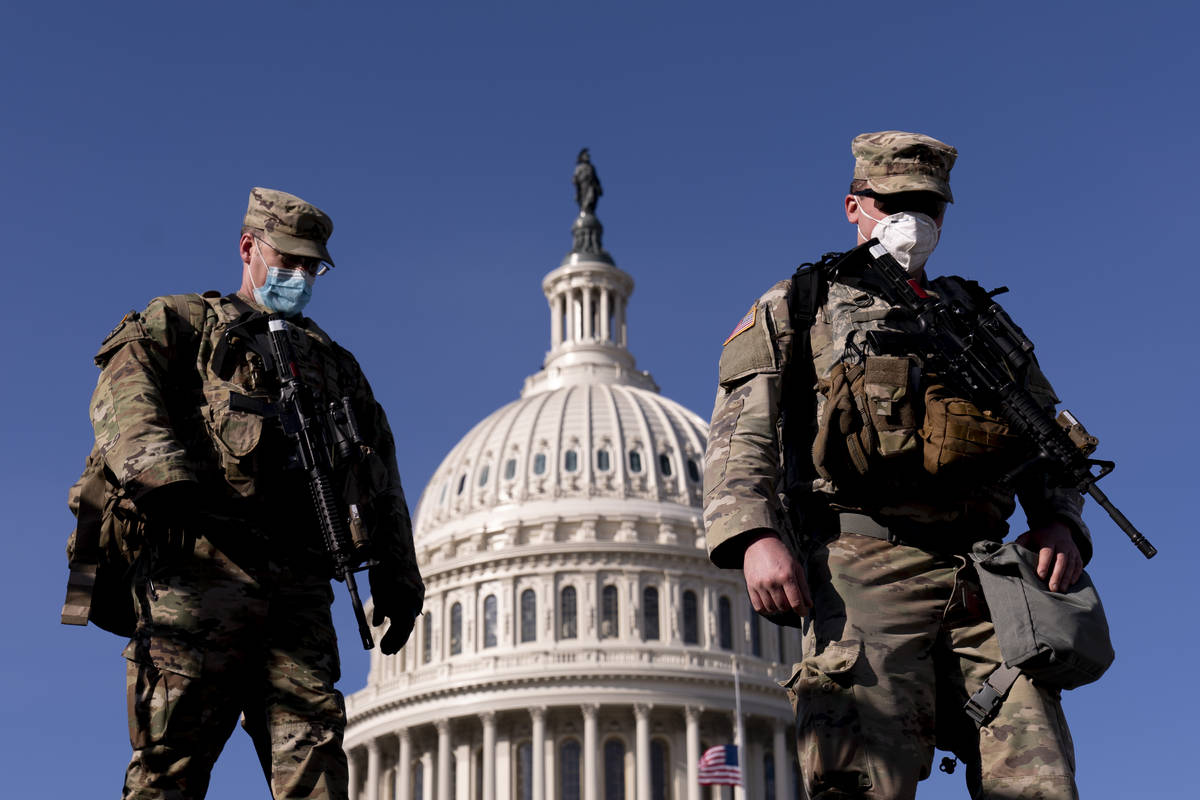 Members of the National Guard walk past the Dome of the Capitol Building on Capitol Hill in Washington, Thursday, Jan. 14, 2021. (AP Photo/Andrew Harnik) 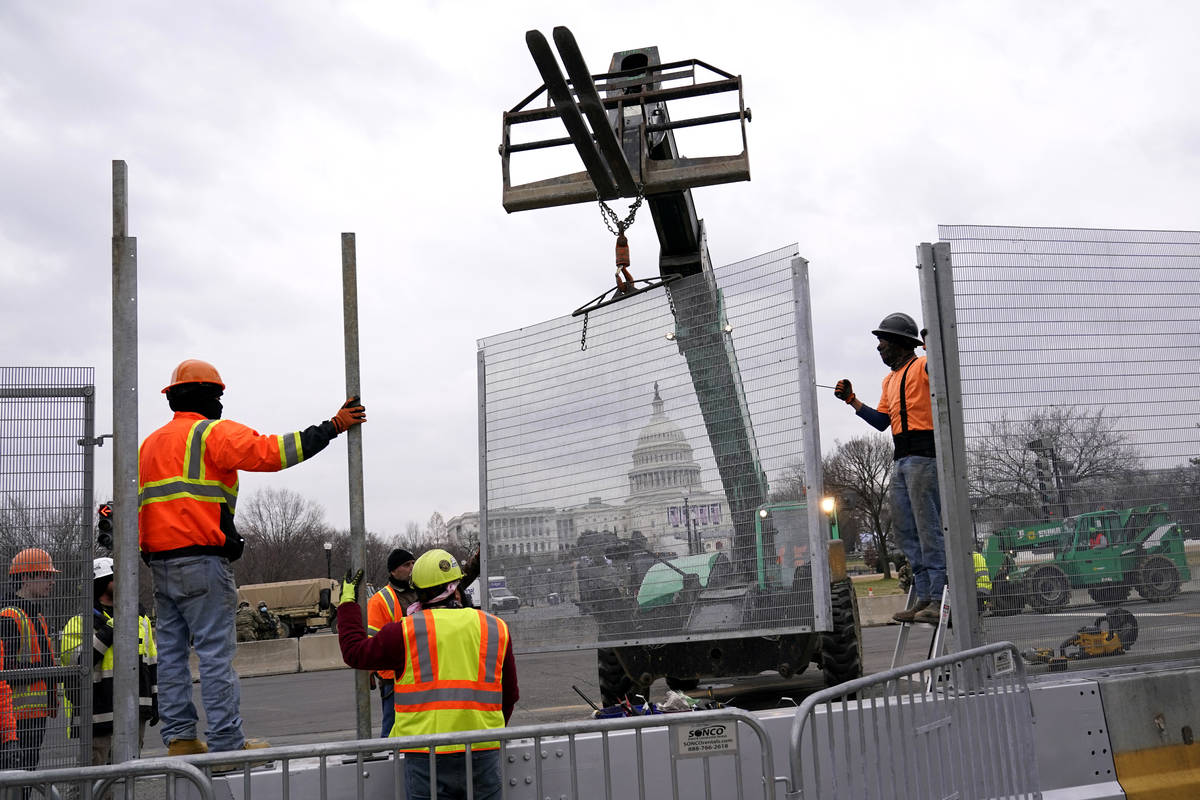 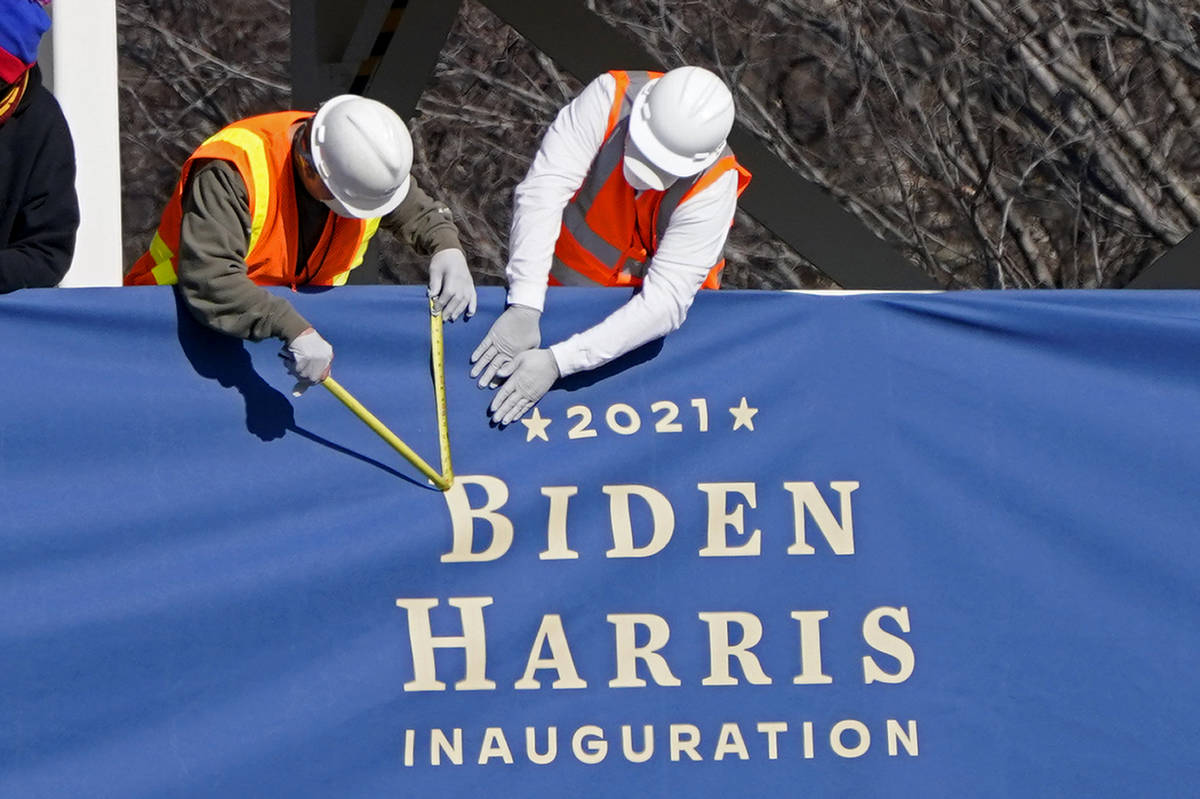 Workers put up bunting on a press riser for the upcoming inauguration of President-elect Joe Biden and Vice President-elect Kamala Harris, on Pennsylvania Ave. in front of the White House, Thursday, Jan. 14, 2021, in Washington. (AP Photo/Gerald Herbert) 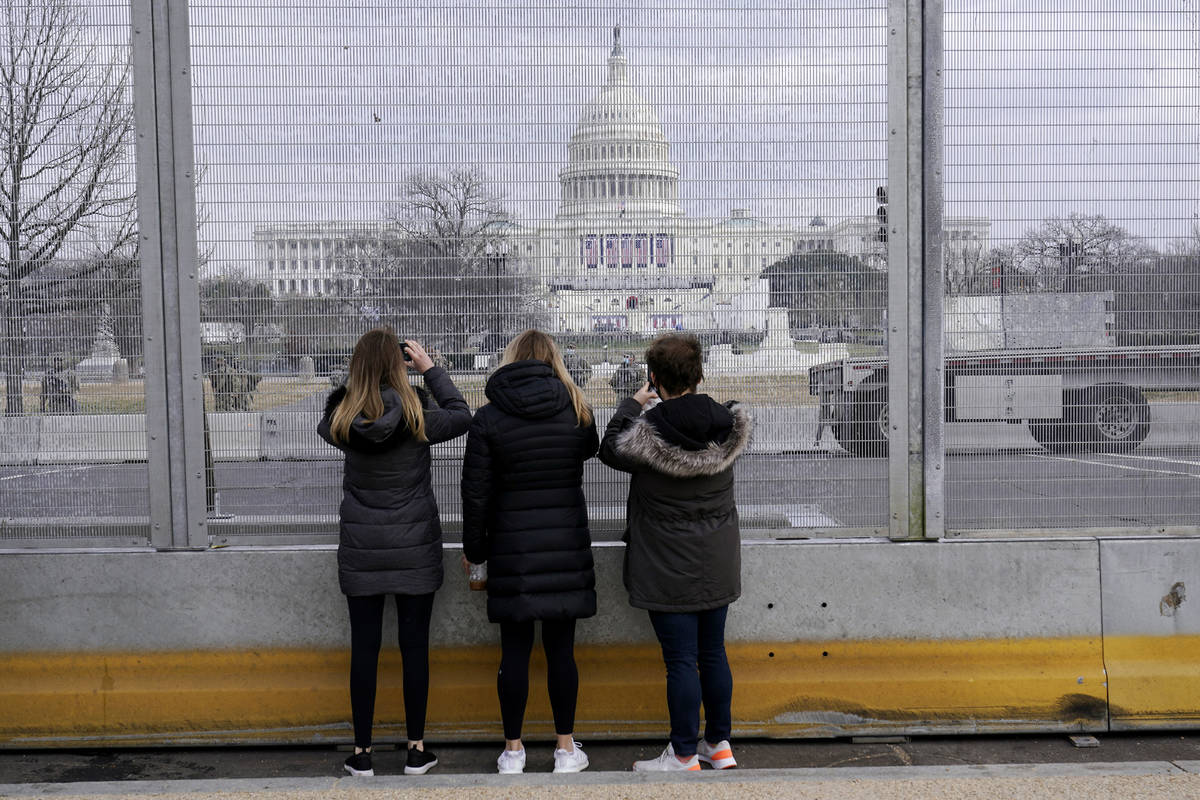 WASHINGTON — With heightened security and no cheering crowds at the Capitol, the 59th presidential inaugural will be one like never before.

The ceremony installing President-elect Joe Biden will take place as the nation grapples with a raging pandemic and political violence that have shattered centuries-old historical traditions.

Biden is scheduled to take the oath of office at the Capitol at noon on Jan. 20 and become the 46th president. U.S. Sen. Kamala Harris, a California Democrat, will become the first woman and first person of color to serve as vice president.

Three former presidents — Barack Obama, George W. Bush and Bill Clinton — are expected to attend the swearing-in at the west front of the Capitol and represent the peaceful transfer of power that has been a touchstone of the nation’s democratic government. Vice President Mike Pence is also expected to attend, although President Donald Trump will not.

But little else resembles an inauguration from the past.

There will be no crowds. And the Capitol complex looks like a war zone, surrounded by 8-foot fencing and razor-sharp concertina wire.

Traditions and norms were rattled Jan. 6 when rioting by Trump supporters at the Capitol erupted into an insurrection that left five people dead, including a Capitol Police officer.

Trump is expected to leave Washington before the ceremony, which comes one week after the House voted to impeach him on a charge of incitement of insurrection. This is the second time Trump has been impeached; the first ended in the Senate voting not to convict him.

Lady Gaga will deliver the Pledge of Allegiance, and Jennifer Lopez will provide entertainment. Virtual concerts from around the country later in the evening will feature the Foo Fighters and Bruce Springsteen.

The bipartisan 59th Inaugural Committee said many events will continue, although public participation will be eliminated.

Blunt and Sen. Amy Klobuchar, D-Minn., will host a ceremonial lunch in the Capitol following the inauguration, with leaders of both parties attending.

In a statement before the Capitol riot, Blunt said: “Our founders had the wisdom and foresight to know that this young nation would face great challenges in the years ahead.”

His statement was prescient.

This year’s inaugural will include 21,000 National Guard troops surrounding the Capitol, the White House and federal buildings to prevent violent attacks like the one on Jan. 6.

About 200 National Guard soldiers and airmen from Nevada will take part in the security detail. Soldiers in the Nevada Army Guard’s 1st Squadron, 221st Cavalry and 3665th Explosive Ordnance Disposal Company, as well as members of the Nevada Air Guard’s 152nd Communications Flight, will join units from other states helping secure the inauguration.

The Nevada Guard units were selected for duty at the inauguration before the Jan. 6 events and will join units from 30 other states, according to a Nevada Guard statement released from Carson City.

Since the riot, more National Guard troops have been ordered up.

The U.S. Secret Service, the U.S. Marshals Service, the Capitol Police and the Metropolitan D.C. Police will take part in the unprecedented security buildup.

Federal officials have warned governors and lawmakers of repeated violence against institutions first initiated last week when Trump loyalists stormed the Capitol, forcing a lockdown and an evacuation of lawmakers during congressional certification of Electoral College results that provided Biden his victory.

Just prior to the violence, Trump urged the crowd to go to the Capitol and “fight like hell.” He told his supporters the day would be historic.

Trump claimed falsely that his election loss was the result of widespread voter fraud, a claim rejected in 62 lawsuits dismissed by federal judges in key battleground states, including Nevada.

More than 100 of those who participated in the insurrection — including Jacob Anthony Chansley, of Arizona, who wore face paint and a headdress with horns — have been arrested and now face federal charges.

The House, on a bipartisan vote Wednesday, impeached Trump over his role in the insurrection.

Biden has left the Senate impeachment trial up to Congress and tried to focus lawmakers on his agenda, which is a call for immediate vaccinations and economic help for Americans amid the coronavirus pandemic.

Precautions to prevent the spread of COVID-19 have diminished travel nationally, including by people who might have planned to travel to Washington to attend the ceremonies and the balls during inaugural week.

There was some initial excitement from Nevadans who sought tickets to the inauguration, but that has diminished because of the coronavirus and the recent violence at the Capitol, said Rep. Dina Titus, D-Nev.

Titus, the first Democratic lawmaker in one of the first early primary states to endorse Biden, said she expected to attend the inauguration.

Rep. Steven Horsford, D-Nev., said he remembered Obama’s first inauguration in 2009. Horsford had then served as a Nevada campaign chair for Obama.

“This inauguration is going to be different, but we’re in a different time, different moments, facing, still, a pandemic and also now the violence incited by Donald Trump,” Horsford said.

In Las Vegas, Culinary Local 226 members who helped elect Biden have no contingent headed to the nation’s capital for the inauguration.

“Keeping it virtual is what we’re doing,” said Bethany Khan, a spokeswoman for the union.

Indeed, the Biden-Harris transition team is urging people to virtually celebrate the inauguration and incoming administration to prevent the spread of the coronavirus and to stay out of harm’s way.

The high-alert security posture includes the closing of the entire National Mall, the open space that runs from the Capitol west to the Lincoln Memorial. The area has been the public gathering place for inaugurations past.

This year, there are no giant video screens, just uniforms and tactical gear.

The mall will be enclosed by fencing. Guard troops and other uniformed law enforcement agents will take up positions to keep the public out.

Road closures and a shutdown of the city’s Metrorail stations downtown will strictly limit travel within the city near the Potomac River. Hotels, Airbnb rentals and other places for lodging plan to close over the days preceding and following the inauguration.

Some hotels are housing the thousands of Guard members in town providing the unprecedented security.

Restaurants and taverns are closed because of COVID-19.