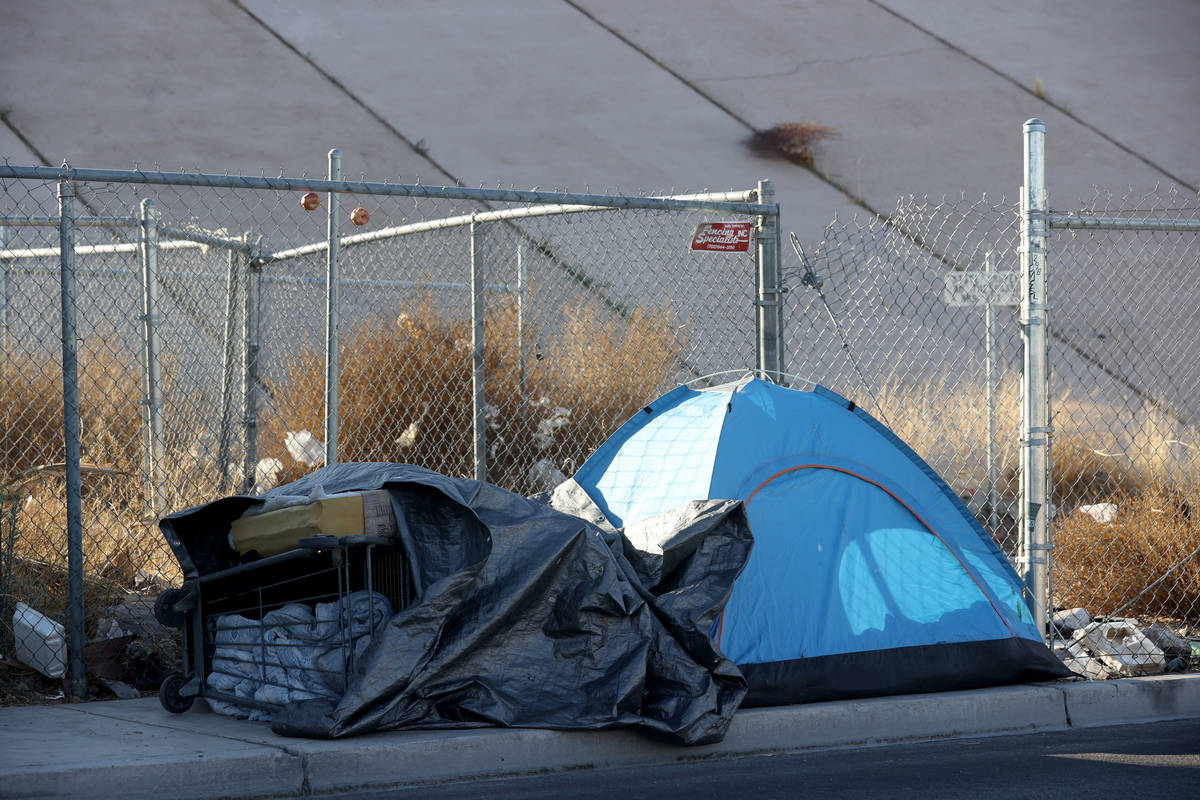 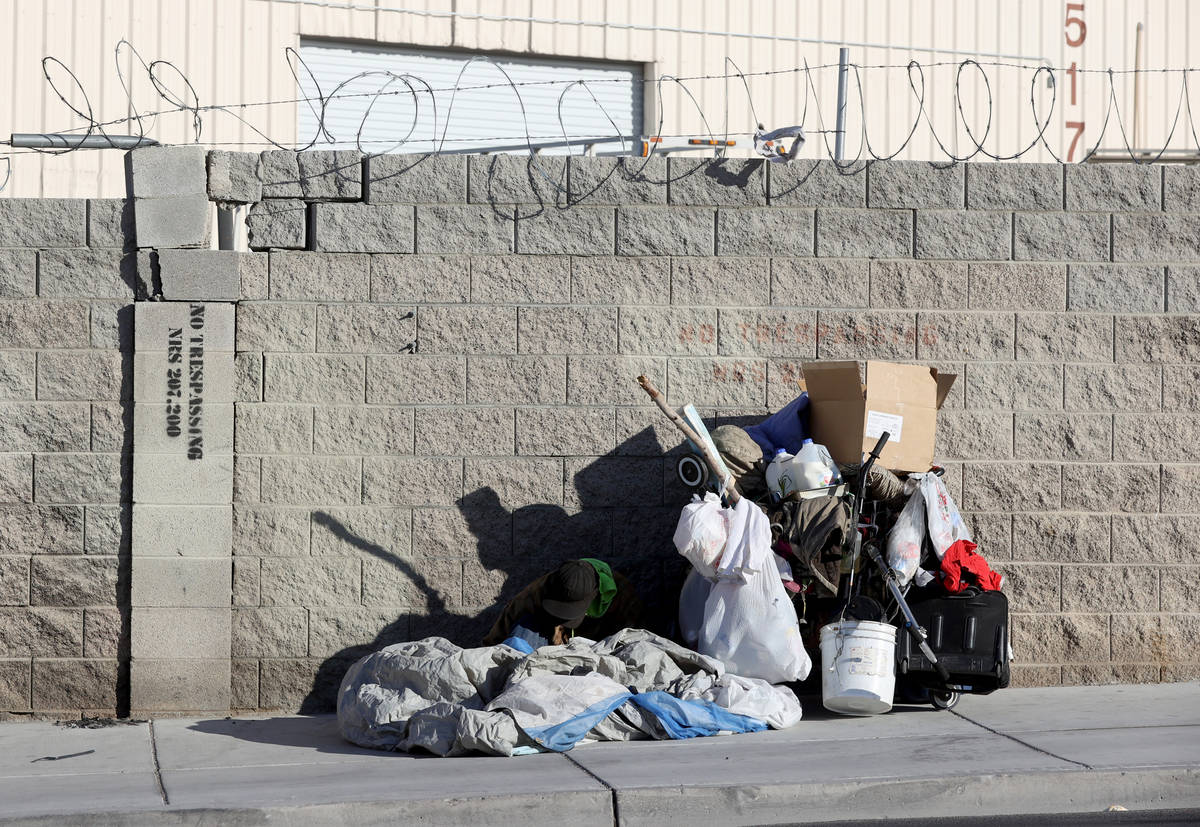 A person sits on the sidewalk on A Street near Owens Avenue in downtown Las Vegas Tuesday, March 9, 2021. (K.M. Cannon/Las Vegas Review-Journal) @KMCannonPhoto 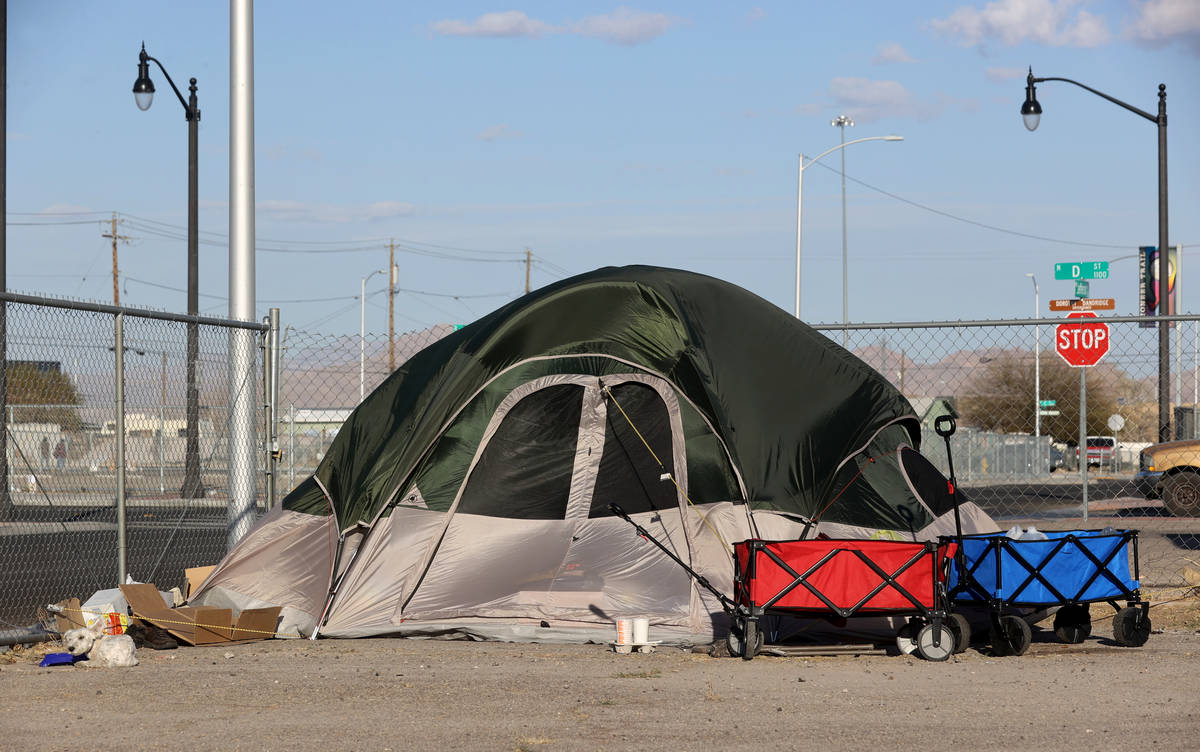 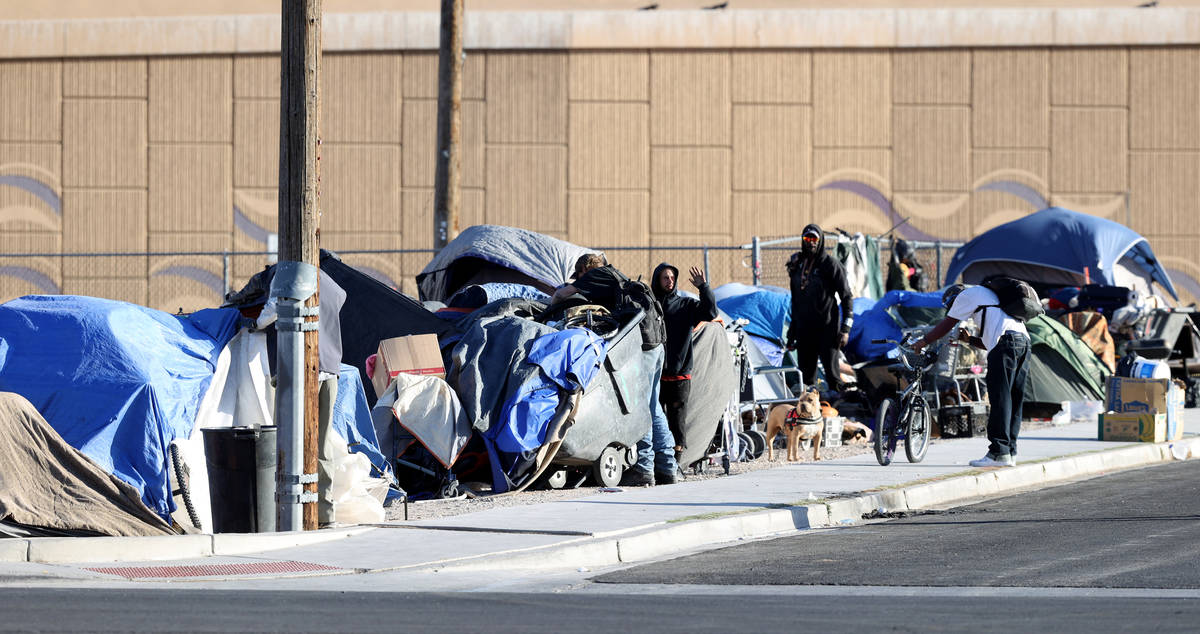 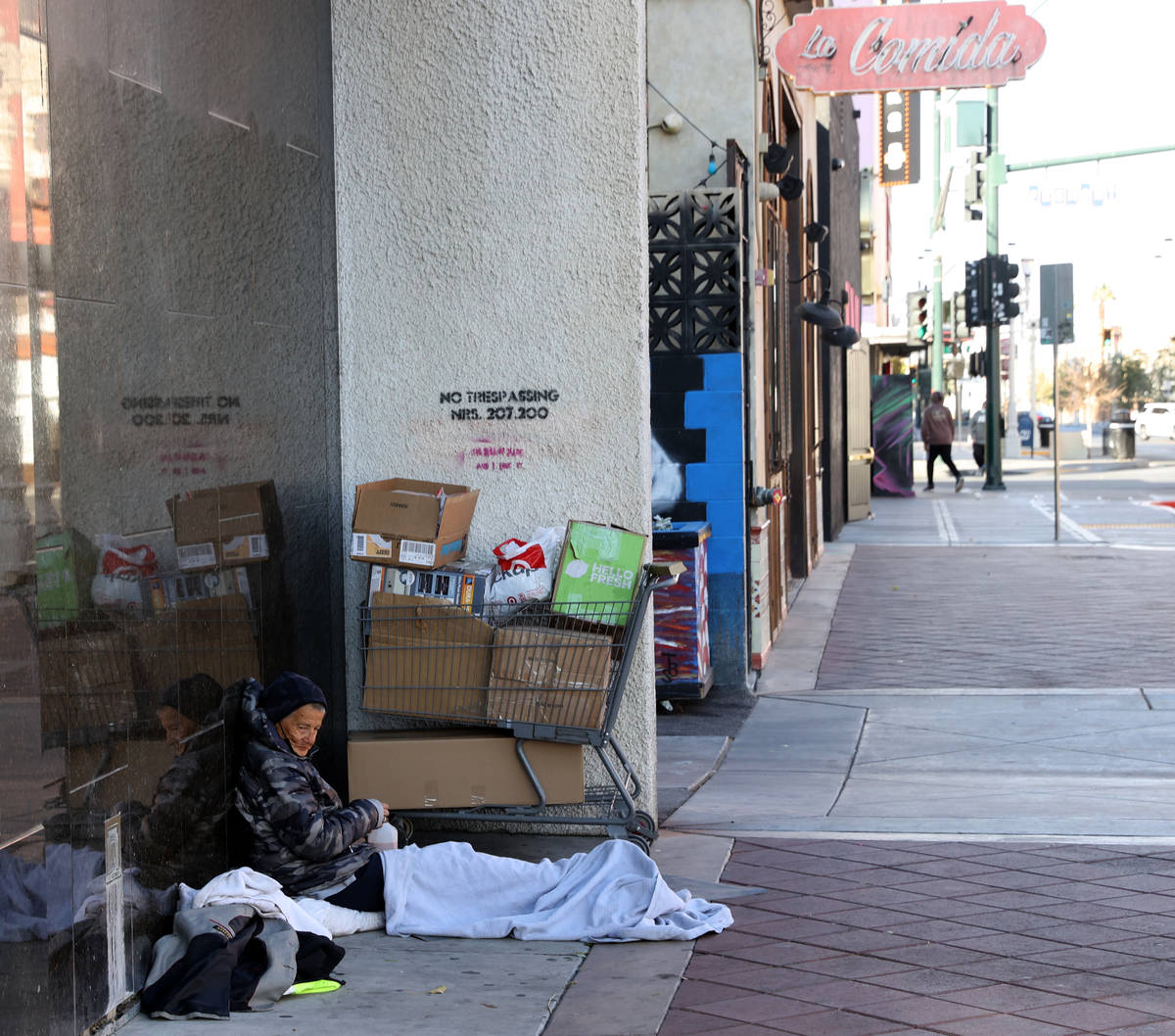 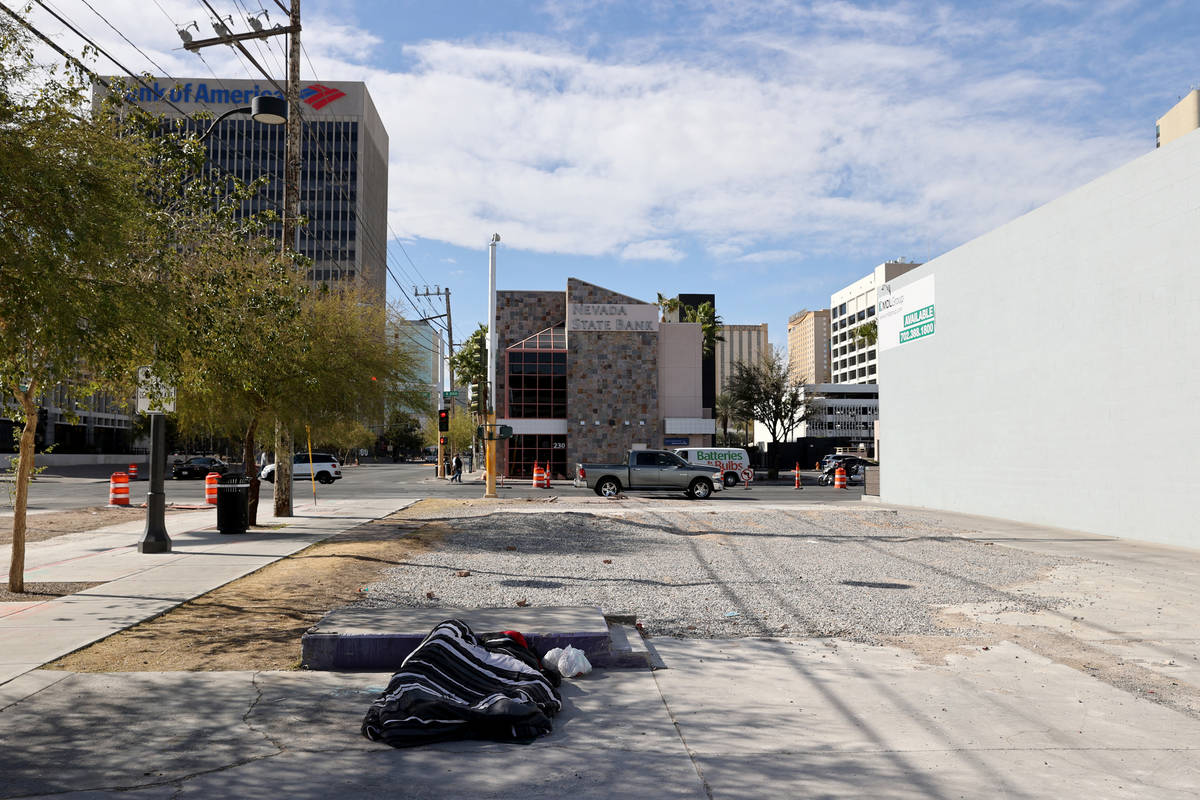 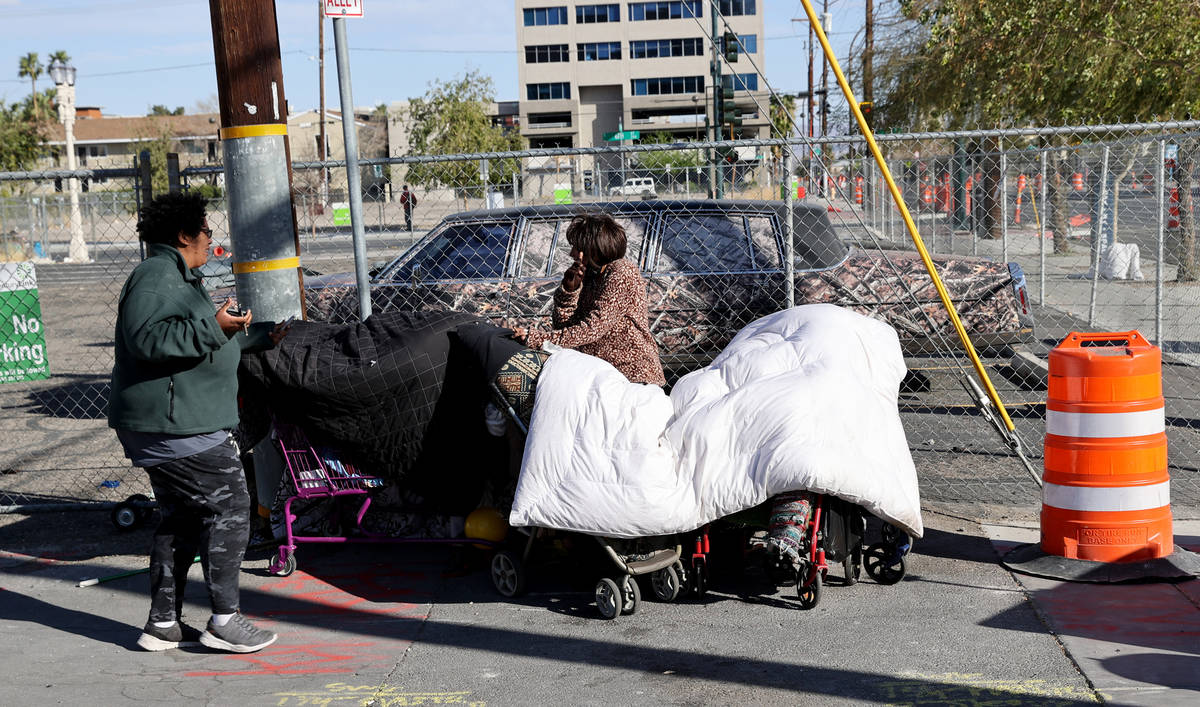 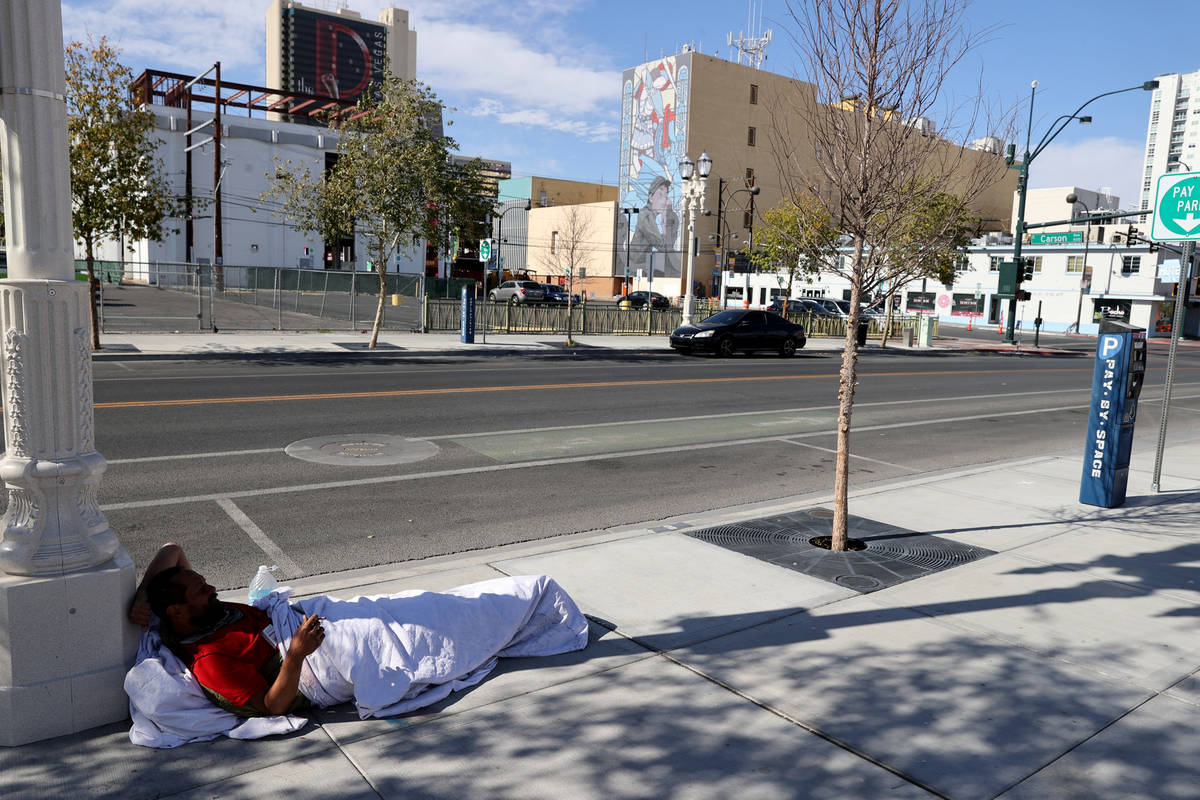 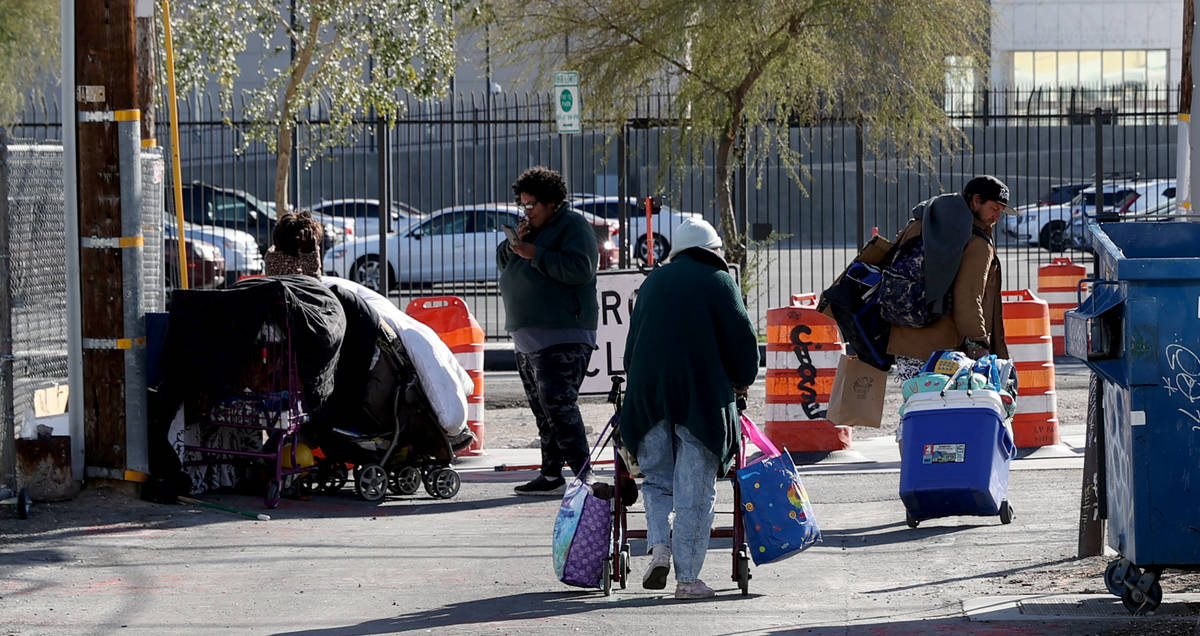 Only one person was sentenced and just seven were cited for violating the controversial homeless camping ban in Las Vegas during the first full year after it went into effect, city officials said.

Critics of the anti-camping law — passed in November 2019 but not in effect until February 2020 — worried that criminalizing camping and sleeping in public areas downtown, and in residential zones, would exacerbate a cycle of incarceration for an already marginalized group.

But figures recently publicized by the city show that the new law — a misdemeanor punishable by up to six months in jail and/or a $1,000 fine — penalized very few people in the first 12 months after its rollout.

“This probably is not reflective of a normal year,” Mayor Carolyn Goodman said last Wednesday, when presented with the data.

The state was effectively shut down a month after the ban became active as nonessential businesses were ordered to close. And the law is only in effect when beds are available at publicly funded shelters, which have been forced to limit capacity during the pandemic.

To be clear, a second ordinance approved by the city council in January 2020 enacted the same rules during times when public sidewalks were being cleaned and it is not contingent on available shelter space.

Still, there has been “very limited” enforcement of the law during the pandemic and punitive measures were viewed as a last resort even before the crisis, according to city and police officials, who say the ban is meant to connect people experiencing homelessness to resources.

“It became a definitive step that would continue to grow and change and that remains in place,” Goodman said by phone Tuesday.

But the pandemic “compassionately sort of put a stop to enforcement,” she added, recognizing that more people were becoming homeless as the pandemic spurred a housing and job crisis as well.

Merideth Spriggs, founder of the homeless outreach agency Caridad, said that “officials weren’t doing much enforcement when things were shut down.” But she noted that homeless people are often targeted for other minor crimes too, including impeding a right of way or trespassing.

From February 2020 to last month, three of seven total citations issued for violating the anti-camping law proceeded to Municipal Court. Two people failed to appear in court for their cases, resulting in a bench warrant for their arrest, leaving just one anti-camping case to be resolved. That individual was sentenced to 30 days in jail, in conjunction with a prior trespassing charge, city officials said.

Meanwhile, two citations were not approved for prosecution and two others were amended to a different charge of pedestrian/vehicular interference.

Deputy City Attorney Jeff Dorocak told the council that the ordinance requires a Las Vegas Metropolitan Police Department officer or city marshal to first notify an individual that they are violating the law.

“Obviously it’s reasonable to surmise that we’ve had incidents that have not risen to a citation level because a person’s told, ‘you need to move on,’ they do and, thus, no citation is issued,” he said.

City officials said Tuesday that they did not expect citations and arrests for violating the anti-camping law to increase in a post-pandemic climate. Instead they reiterated that the ultimate goal was to assist people facing homelessness, a problem that’s expected to grow.

The support includes diverting defendants into a specialty court for homeless services. In fact, each person initially cited for violating the anti-camping ban was offered entry into the program except for the two whose cases were dropped, city records show.

Goodman last week suggested that there had been a shift in attitude as more people face job and housing insecurity. She referenced encampments that she would see while driving around the city, but rather than call a multi-agency homeless outreach team, “I just figured, leave them alone.”

“This is a terrible time for our state and for the nation and everywhere else,” she said.