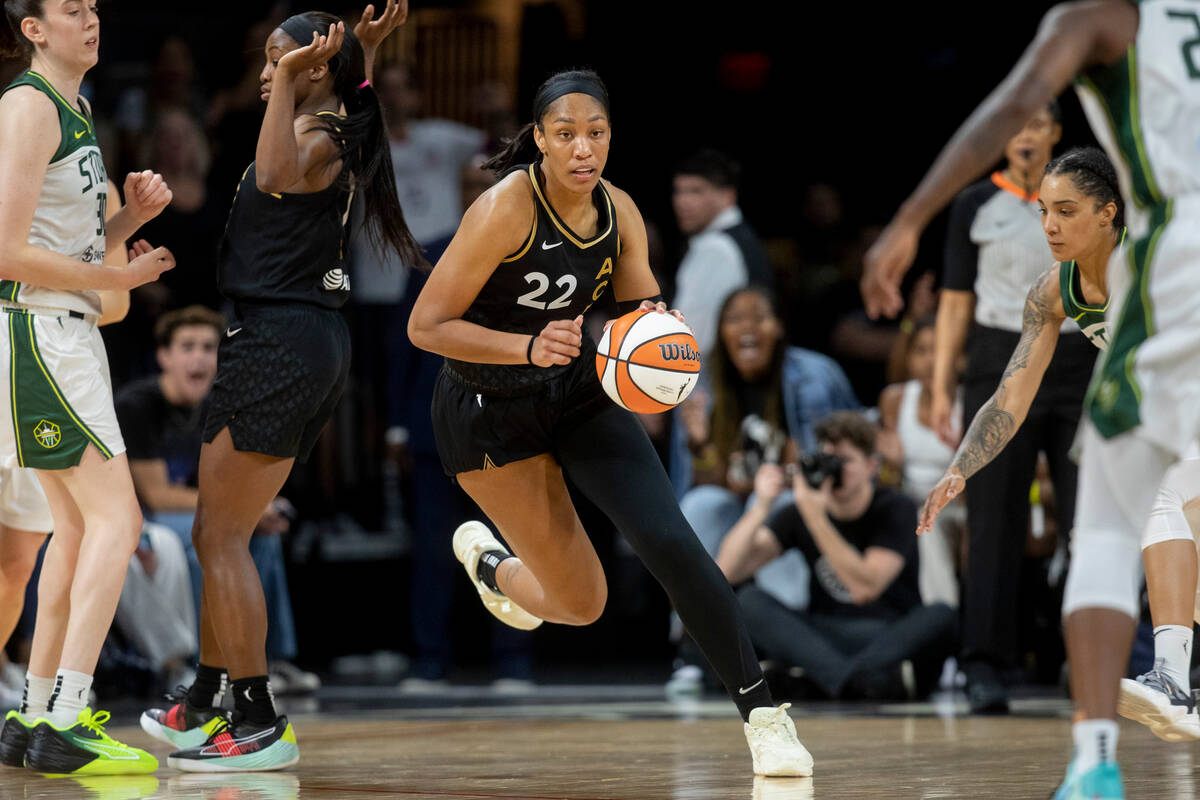 Las Vegas Aces forward A'ja Wilson (22) brings the ball up the court as the Aces face the Seattle Storm in the last regular season game of the year at Michelob Ultra Arena on Sunday, Aug. 14, 2022, in Las Vegas. The Aces beat the Seattle Storm 109-100 to clinch the No. 1 seed going into the WNBA playoffs. (Steel Brooks/Las Vegas Review-Journal)

She recently praised this Aces team for its tenacity and firepower. “They’re an offensive juggernaut,” she said. “There are so many weapons who can do damage on any given night.”

The No. 1-seeded Aces take that high-powered attack into the playoffs beginning at 7 p.m. Wednesday when they host the No. 8 Phoenix Mercury at Michelob Ultra Arena. Despite clinching the best playoff position in the league on the final day of the season, the Aces’ job not done until they win their first championship.

“We didn’t come here to win the regular season,” Aces coach Becky Hammon said Sunday after clinching the No. 1 seed.

Expectations for the Aces began to rise before the season even started. The team hired Hammon away from the San Antonio Spurs and made her the highest-paid coach in the league. The Aces also returned most of a roster that clinched the No. 2 seed in 2021, though they allowed Australian center Liz Cambage to depart in free agency.

Their offseason acquisitions and the arrival of Hammon made the rest of the league take notice, though people weren’t sure how the team was going to fare once the season started.

The Aces quickly put any questions about their identity or goals for the season behind them. They started 13-2, with Hammon’s new, perimeter-based system empowering guards Kelsey Plum, Chelsea Gray and wing Jackie Young to take more active roles in the offense.

However, starting two-time sixth player of the year Dearica Hamby along with former MVP A’ja Wilson made the Aces smaller than almost every team they faced.

Without Cambage, there were legitimate questions how Wilson would hold up having to carry more of the load. But Wright said she saw the 2020 WNBA MVP respond by taking her game to new heights.

“From last year to this year, she’s way more locked in,” Wright said.

The Aces weren’t perfect though. An embarrassing loss to the Chicago Sky on June 21, which saw Hammon’s team blow a WNBA record 28-point lead, sent the team into a tailspin, and they limped into the All-Star break.

But Hammon’s team finished the season playing near their best. The Aces beat the Storm twice in the final four games and wrested the No. 1 seed from the reigning champion Chicago Sky.

However, questions about depth, Hamby’s availability after suffering a right knee bone contusion and potentially challenging playoff matchups still exist, though one issue may be more important than the rest.

Defense could hurt them in the playoffs. The Aces can’t just count on their offense to outscore the other team.

The playoffs begin for the Aces against the Mercury Wednesday. But as they’ve made clear themselves, it’s championship or bust.

“We want to win in the playoffs,” Hammon said. “We’ve positioned ourselves to do that.”