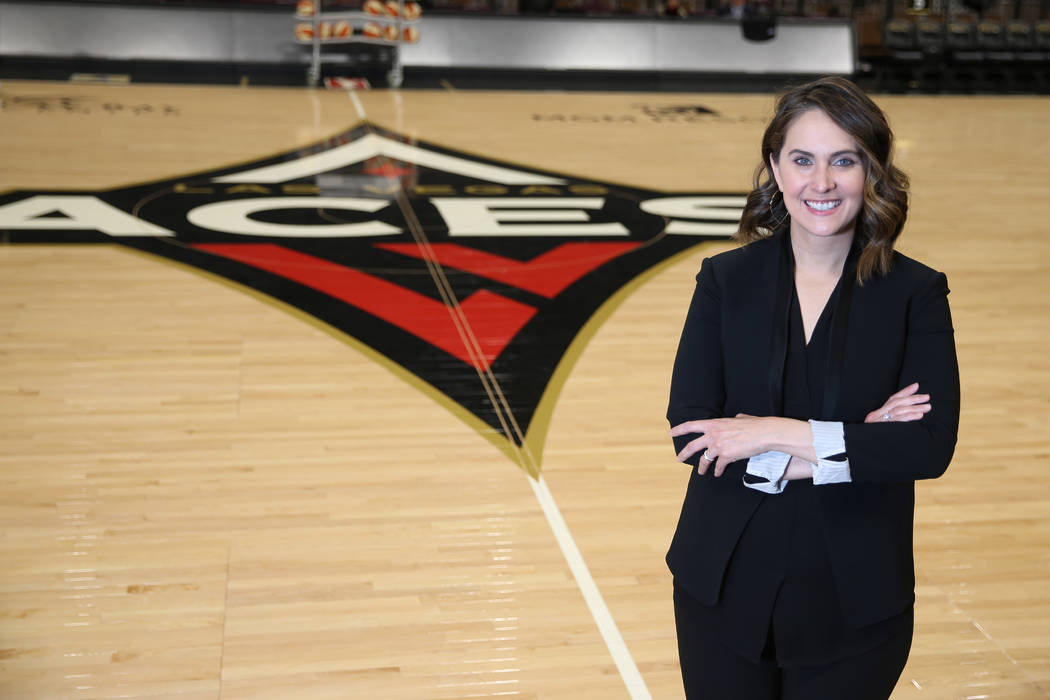 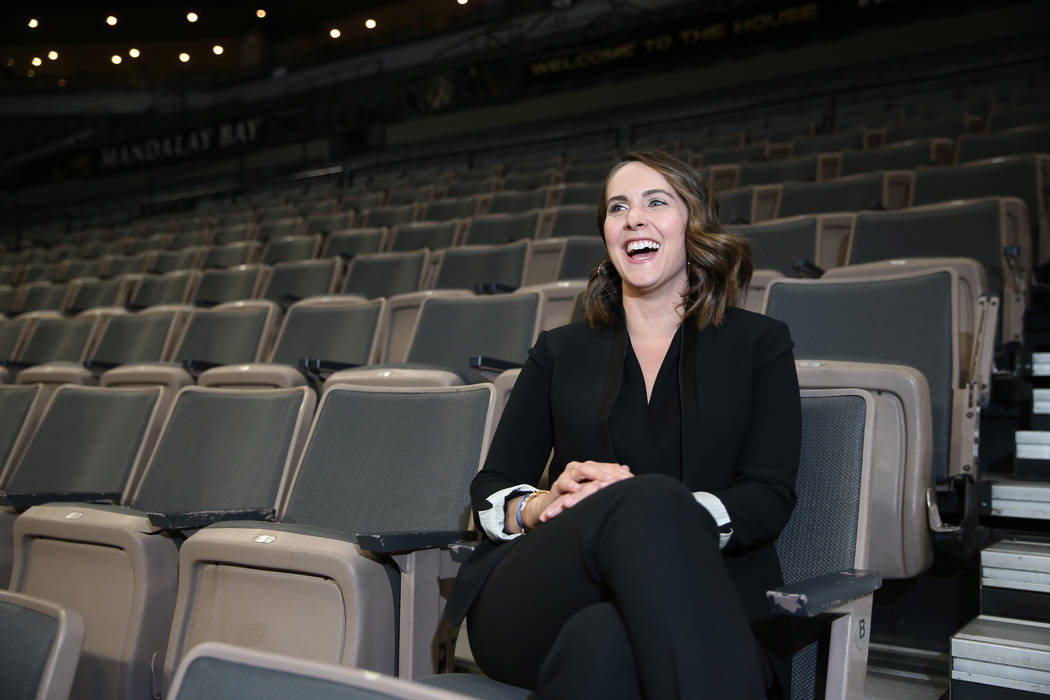 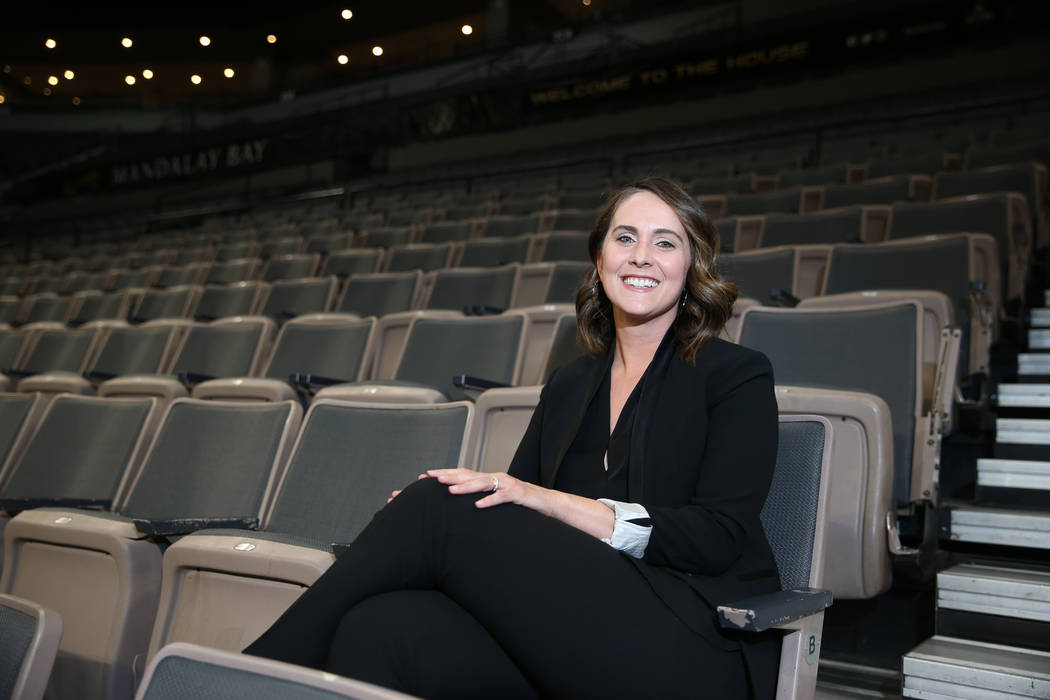 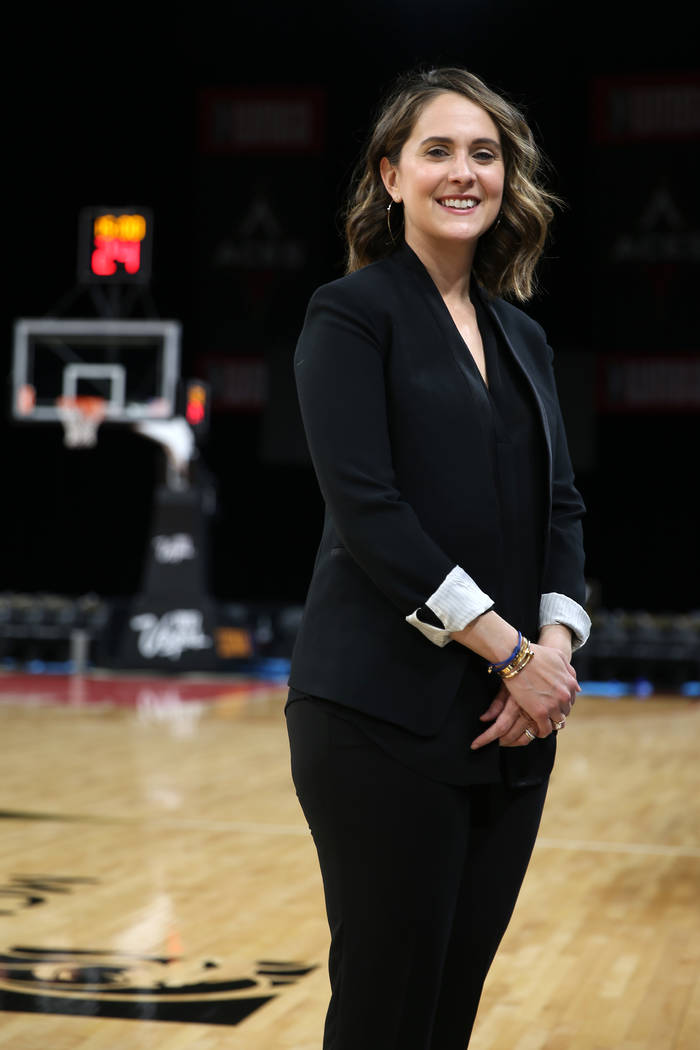 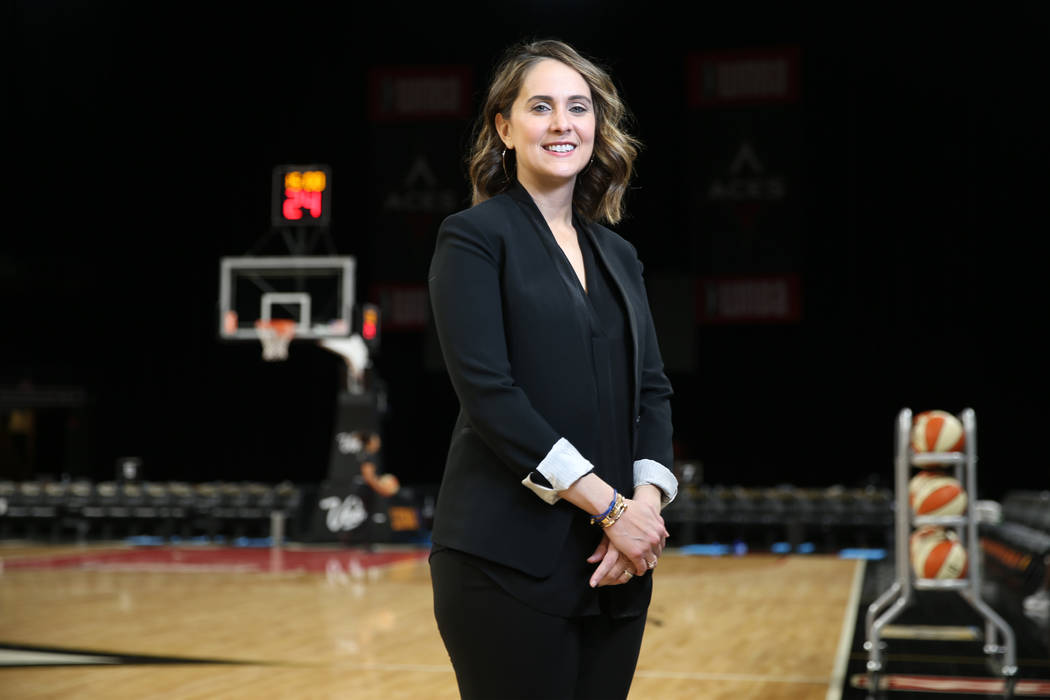 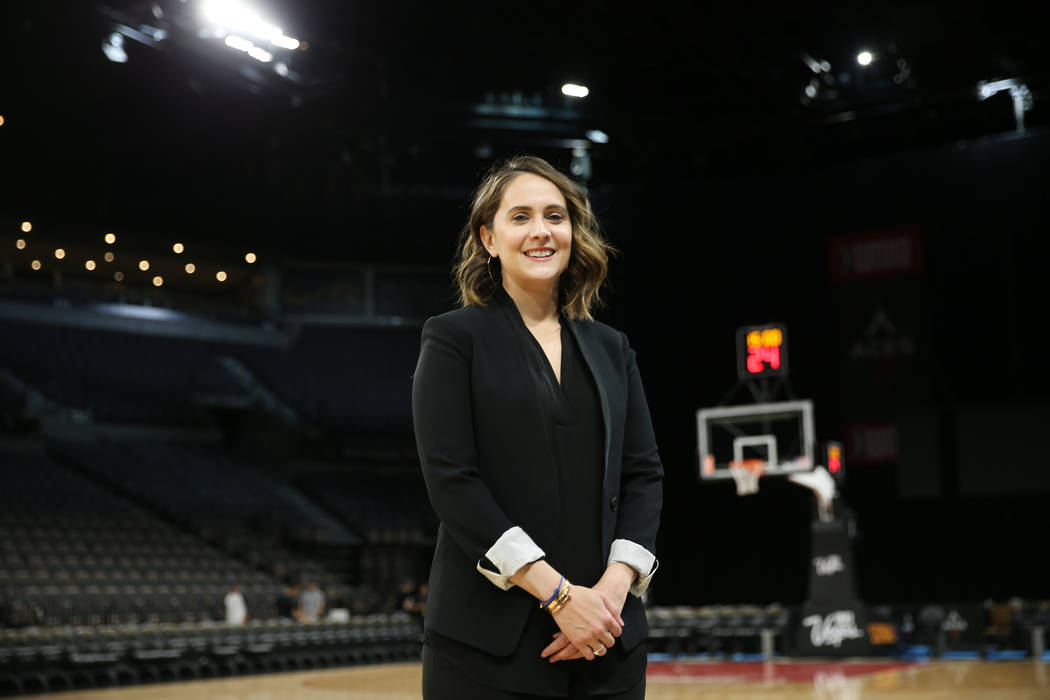 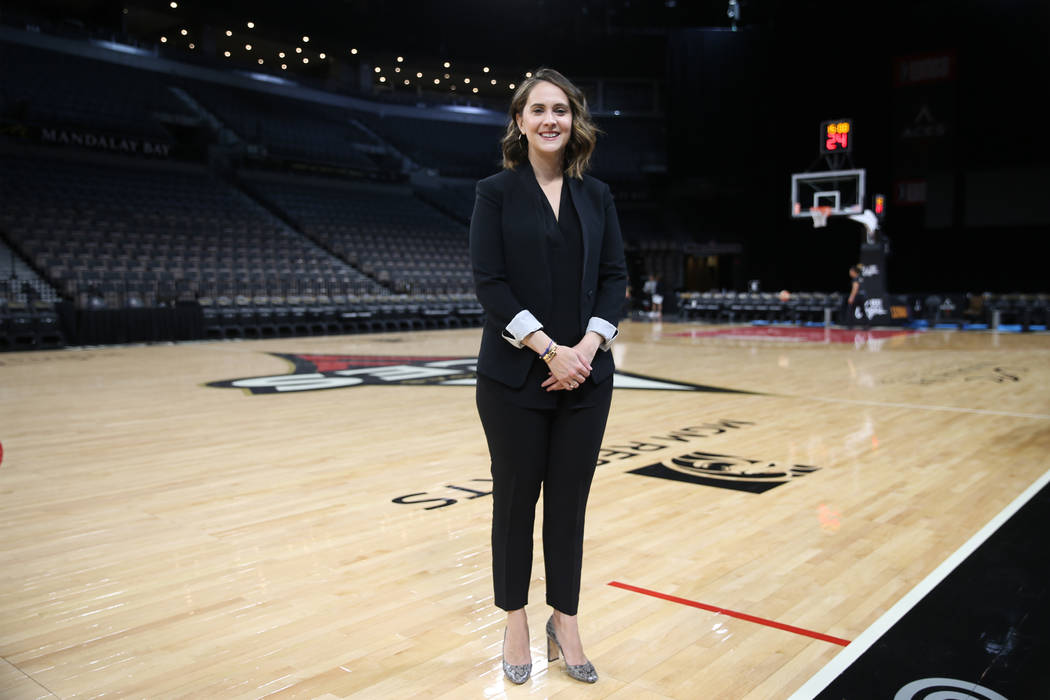 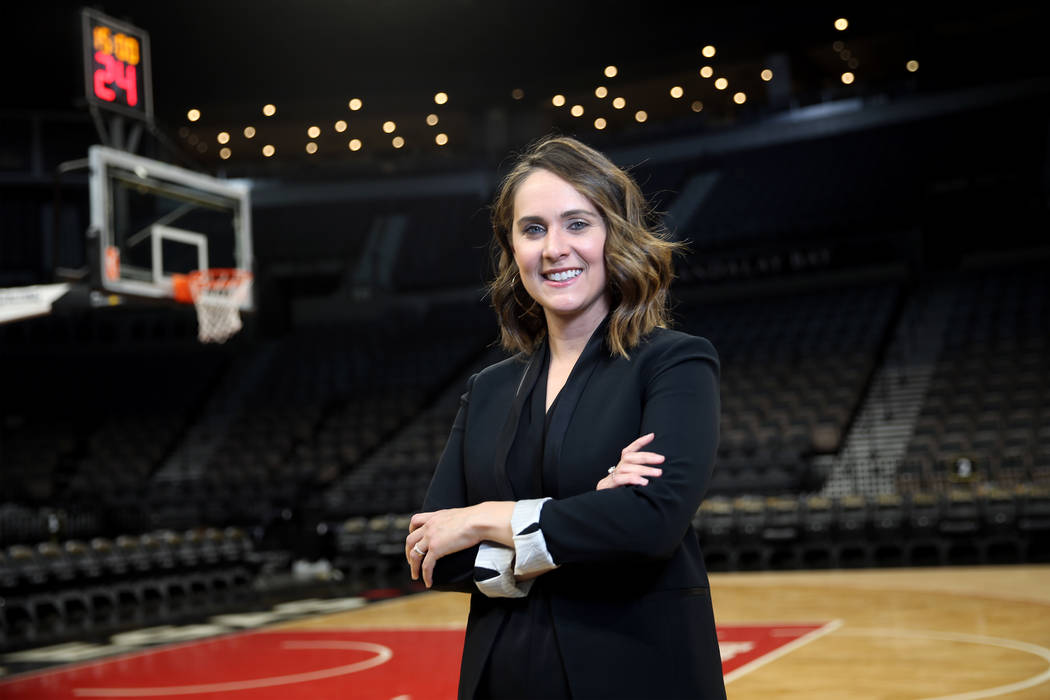 Monjer, 34, oversees the Aces’ business operations and is a trusted confidante of president of basketball operations Bill Laimbeer, who hired her away from MGM Resorts International at the end of last season. She helped design the team’s logo, approves every advertisement around town and is responsible for curating the game day experience at Mandalay Bay Events Center.

“She’s arguably our most valuable player and our glue player by far,” said Laimbeer, also the Aces’ coach. “She’s a very smart individual who wants to take on this challenge of the Las Vegas Aces and the WNBA. She’s learned everything from finance to human resources to television. I’m just throwing everything at her so she can learn.”

Monjer grew up in South Florida, but spent her childhood commuting to her mother’s native Venezuela during summers. She’s always loved basketball and football, and rooted for the Miami Heat and Miami Hurricanes.

She also thrived in academia and relished big picture thinking, not knowing that she’d someday work in professional sports.

“There always have been these threads, like I like running a business,” said Monjer, who speaks fluent Spanish. “I like thinking through how a problem in this sector impacts a problem over here. I like that big picture thinking.”

Monjer attended the University of Miami from 2003 to 2006 and earned a degree in business management with an emphasis on entrepreneurship.

She built her business acumen first as a retail buyer for Macy’s and then while working abroad for the United Colors of Benetton — a fashion company based in Italy — before returning to graduate school at Cornell, where she earned an MBA degree in 2014.

PepsiCo then hired her as a marketing manager, and she moved to Chicago to manage the brand development of Quaker Oats — the official hot cereal of Super Bowl XLIX. The brand was also the title sponsor of the city’s Major League Soccer franchise, the Chicago Fire, providing Monjer a window into the business of sport.

“It’s dynamic, it’s fast-paced,” she said. “You have to solve new problems every day, new challenges. I like that.”

Monjer moved to Las Vegas in October 2016 for personal reasons. She resumed her professional career with MGM as its executive director of entertainment marketing.

But the company bought the Aces in the fall 0f 2017, and its senior leadership tasked her with establishing a brand identity — on top of her incumbent daily responsibilities.

“It never felt like work. I was tired, but I never really complained,” she said. “I liked it. … I never even questioned my commitment.”

Monjer helped select the team’s name and designed its logo. The word “Aces” represents excellence with the obvious allusion to gambling, but she says it’s more so representative of elite athletes. The logo is sleek and unisex, with sharp lines designed to honor the city’s architecture.

“We were the first to start moving in that different direction,” she said.

The inaugural season was sort of a blur for Monjer, who said she often worked more than 100 hours a week marketing the Aces and promoting MGM’s entertainment endeavors.

But she thrived under the pressure of two roles and impressed Laimbeer with her persistence, creativity and sociability. He ran business and basketball operations last season and sought to delegate some of his responsibilities for the betterment of the franchise.

Monjer was the natural fit.

“She’s going to make sure things are done right,” Laimbeer said. “Her biggest trait, I think for us, is her people skills navigating MGM. Everybody likes her.”

Monjer says she feels she makes more of an impact in her new position and is focused on building upon the success of last season. She’s personable and caring and is creating a benevolent culture that extends well beyond the walls of Mandalay Bay Events Center.

Oh, and she’s just getting started.

“She is very empowering to her team members, she’s a great leader, always eager to teach,” said Swords, who worked for the team in the offseason. “She’s really invested in the Aces brand and our team, and you can feel that just when you’re speaking to her.”