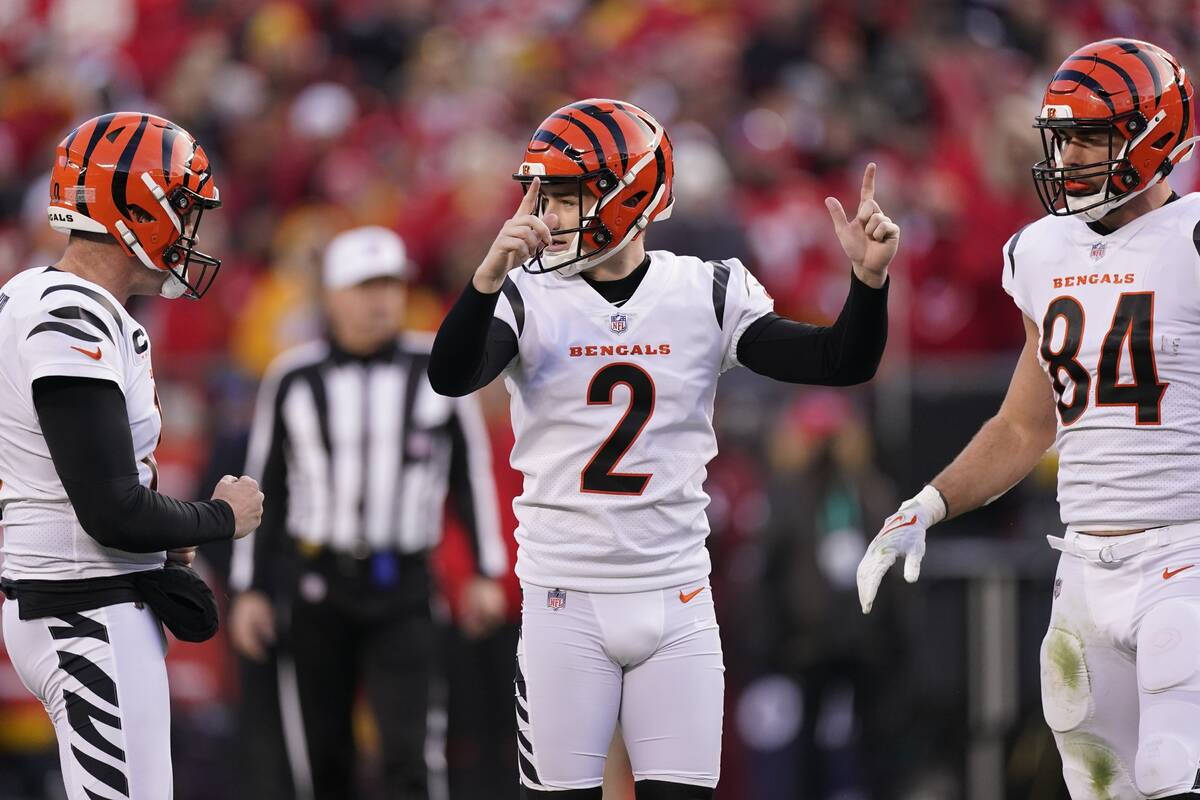 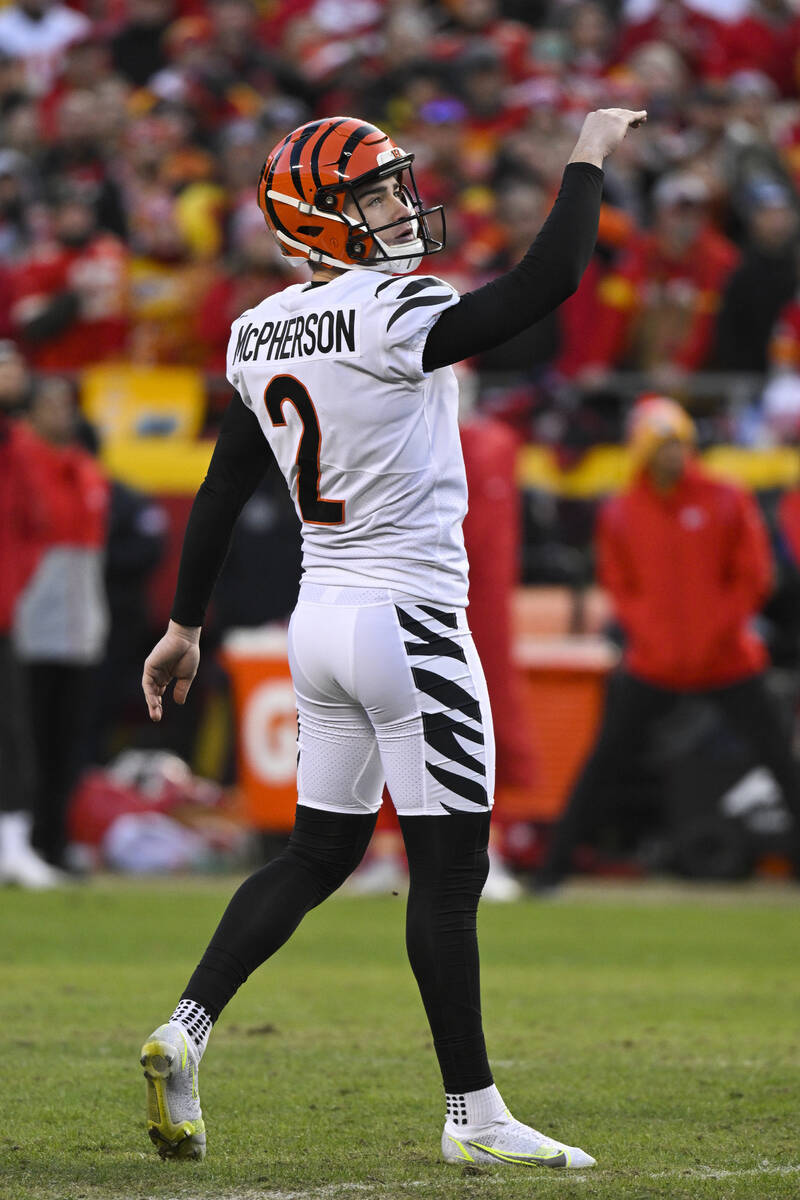 Cincinnati Bengals kicker Evan McPherson watches as his field goal gives the Bengals a 24-21 lead over the Kansas City Chiefs during the second half of the NFL AFC Championship football game, Sunday, Jan. 30, 2022 in Kansas City, Mo.. (AP Photos/Reed Hoffmann) 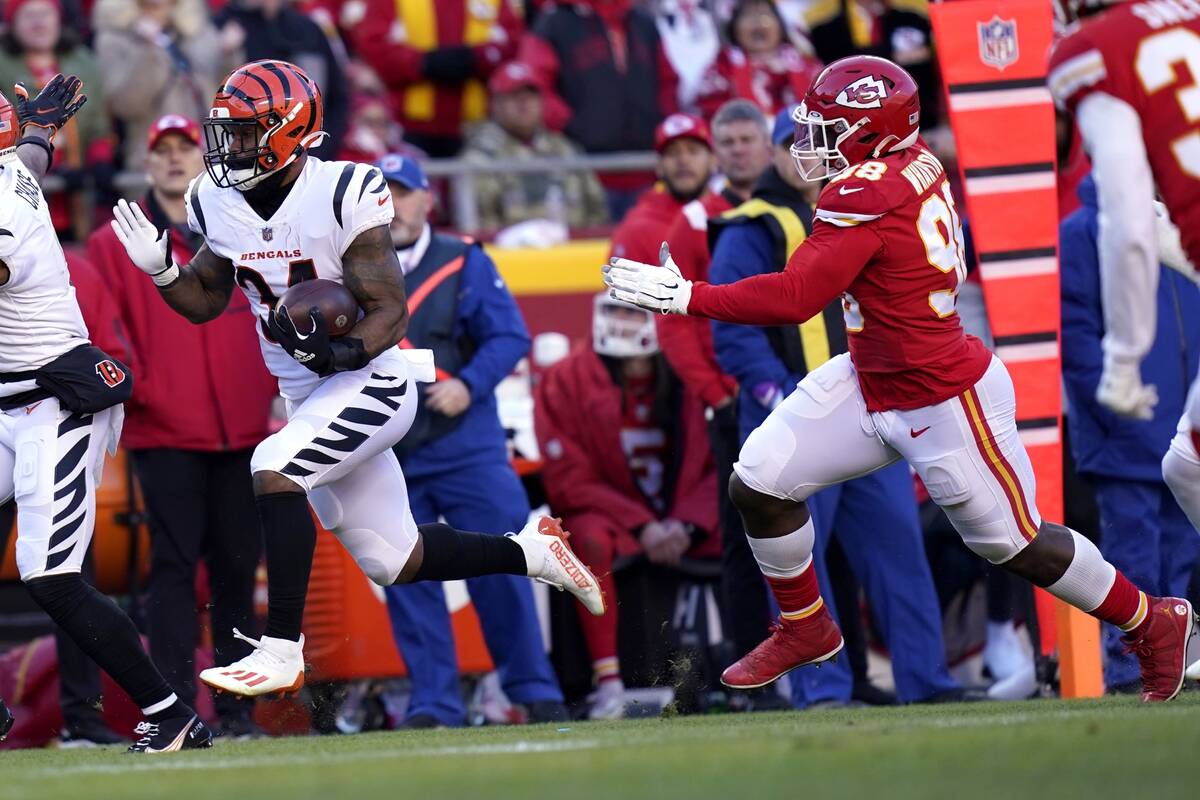 Cincinnati Bengals kicker Evan McPherson has gained acclaim by going 12-for-12 on field goals in the playoffs, including game-winners against Tennessee and Kansas City.

But Circa Sports is much more concerned about McPherson running into the end zone in Sunday’s Super Bowl against the Los Angeles Rams.

Circa is offering odds on nearly every player to score the first touchdown Sunday, including improbable ones such as offensive linemen, long snappers and the kickers.

Circa found a taker on McPherson at 3,000-1, and sportsbook manager Chris Bennett said he will actually have to sweat out that result Sunday.

“No matter what happens with the money we write in this pool until the game starts, if he scores the first touchdown, we’re going to get clobbered,” Bennett said. “The liability is way more than the amount of money that we’ll take on the pool overall.”

Most of the bets on the first touchdown score props will be on the obvious suspects. Rams receiver Cooper Kupp is the favorite at Circa at +475, followed by Bengals running back Joe Mixon at +650, Rams running back Cam Akers at 7-1, Rams receiver Odell Beckham Jr. at 8-1 and Bengals receiver Ja’Marr Chase at +925.

Bennett said he books the prop knowing which players he wants to win on and which ones he’s comfortable losing to. He wants to win on the favorite, and Kupp’s low odds should keep him from being a liability for Circa.

Bennett said he’s comfortable losing to a player such as Bengals backup running Samaje Perine, who scored only two TDs in the regular season but broke a 41-yard score against the Kansas City Chiefs in the AFC title game.

“I opened him 60-1. I figured there was a decent chance someone would want to bet him at those odds. They did,” Bennett said.

“And as usual we would lose big if there is no TD in the game, which we have at 200-1,” Murray said via text message. “That gave us a real scare the last time the Rams were in the Super Bowl three years ago.”

New England finally scored a touchdown in the fourth quarter of a 13-3 victory over the Rams to prevent that outcome.

Bennett said bookmakers have to accept that a long-shot outcome could beat them. If McPherson somehow scores on a fake field goal, oh, well.

But there’s no use taking any more liability. McPherson’s odds are down to 750-1.