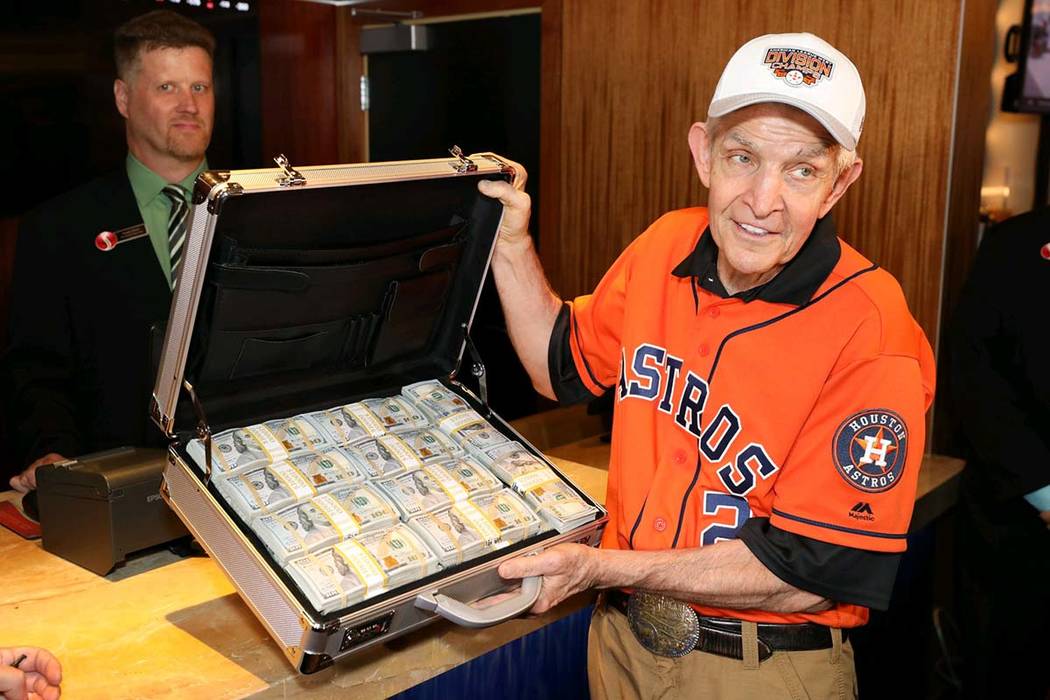 Jim “Mattress Mack” McIngvale holds a suitcase full of cash before making a $3.5 million wager to win $7.7 million on the Houston Astros to win the World Series on Tuesday afternoon at DraftKings sportsbook at Scarlet Pearl Casino in Biloxi, Mississippi. (Photo courtesy of DraftKings)

Mattress Mack graciously fielded calls from around the world after the Review-Journal published his cell number before the World Series.

The Houston furniture store owner was seeking bookmakers willing to take his $1 million-plus bets on the Astros.

“Some guys called from Australia. What they were trying to do wasn’t legal but at least they gave it an effort,” Jim “Mattress Mack” McIngvale said Friday. “I got a few prank calls from other fans, some pretty good ones, but that’s all right. It was great. I like talking to people.”

McIngvale wagered a total of $2.65 million on the Astros following their losses in Games 1 and 2 of the World Series, bringing his total bets on Houston to win the World Series to roughly $12 million to win $19 million.

“There’s so many numbers flying around, I’ve lost track,” McIngvale, 68, said Friday after he flew from Houston to New Jersey to place $1.05 million in wagers and then flew to Washington, D.C. to attend Game 3.

McIngvale has placed eight figures in bets to hedge a free mattress set promotion that will cost him an estimated $20 million in refunds if the Astros win the World Series. But he figures to be a winner either way.

“Let’s face it, I’ve got $20 million in free publicity from this deal, at least,” he said. “I was on ‘Fox & Friends’ the other day for 4½ minutes. How do you put a price on that and the hundreds of articles across the country?

“It’s all about having a presence in the marketplace. Whether we win or lose, September and October are the two slowest months in the furniture business and they’ve been our busiest months.”

After the Astros lost Game 1 to the Washington Nationals, McIngvale wagered a total of $1.6 million to win $1.34 million in Biloxi, Mississippi, on Houston to win the World Series: $1 million to win $847,000 at the DraftKings sportsbook at the Scarlet Pearl Casino and $600,000 to win $500,000 at the MGM Resorts book at the Beau Rivage.

“I’m still a believer. We’re gonna be all right,” McIngvale said. “I’ll bleed orange and blue till the day I die.”