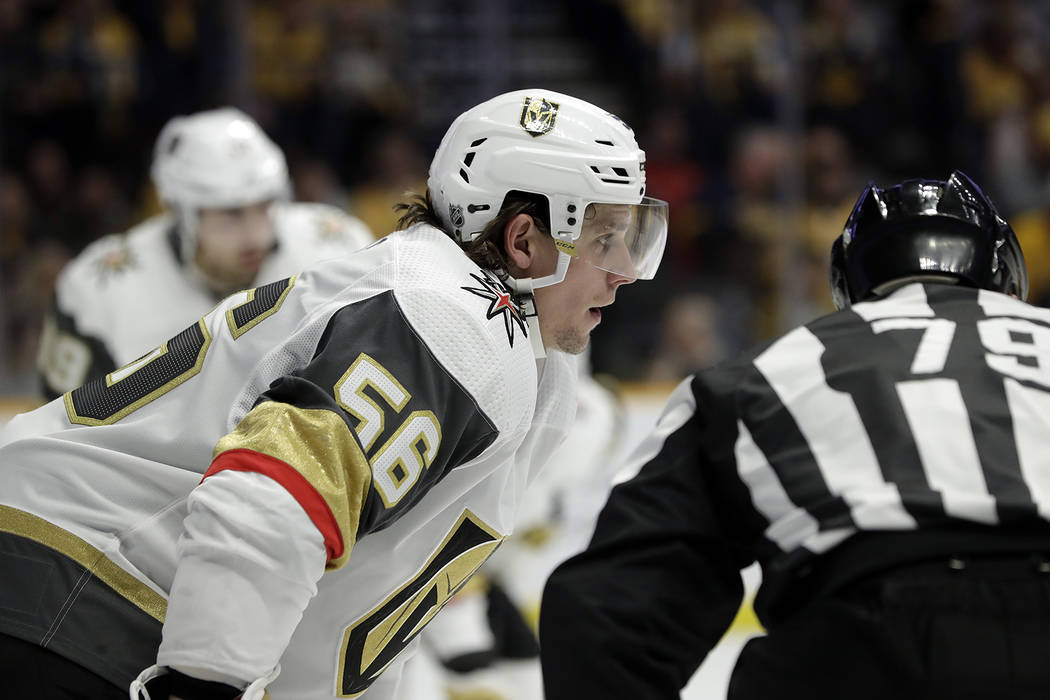 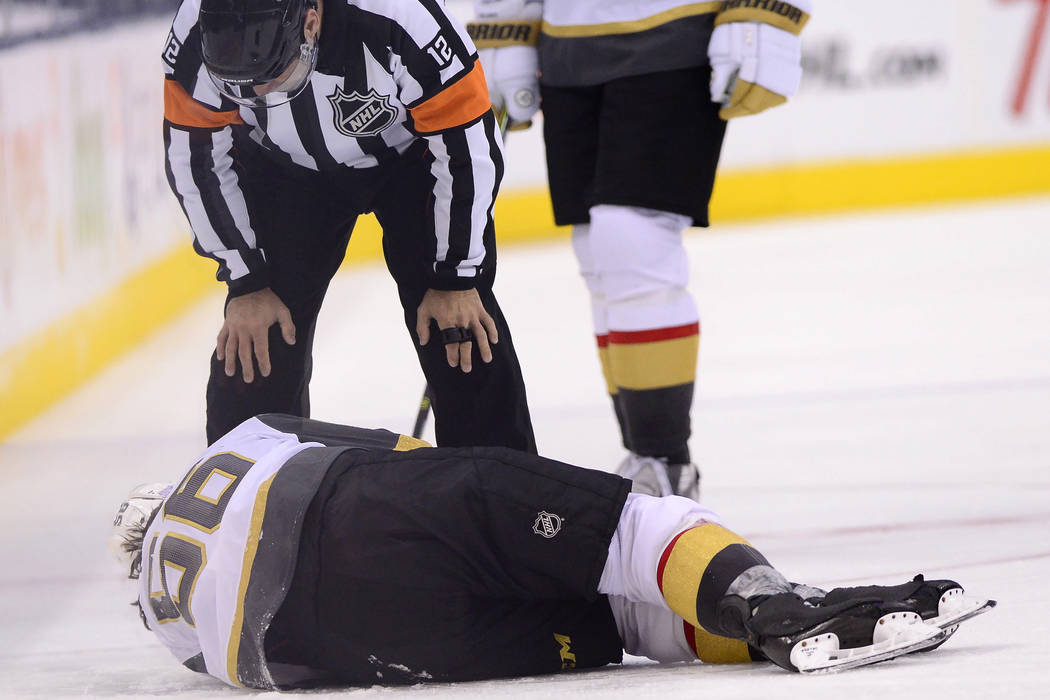 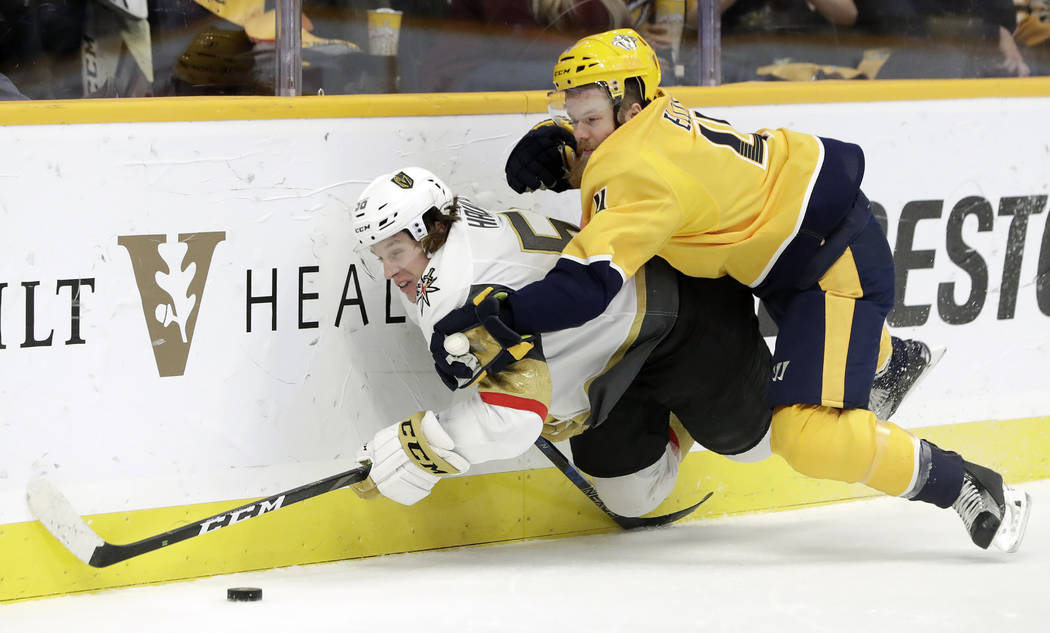 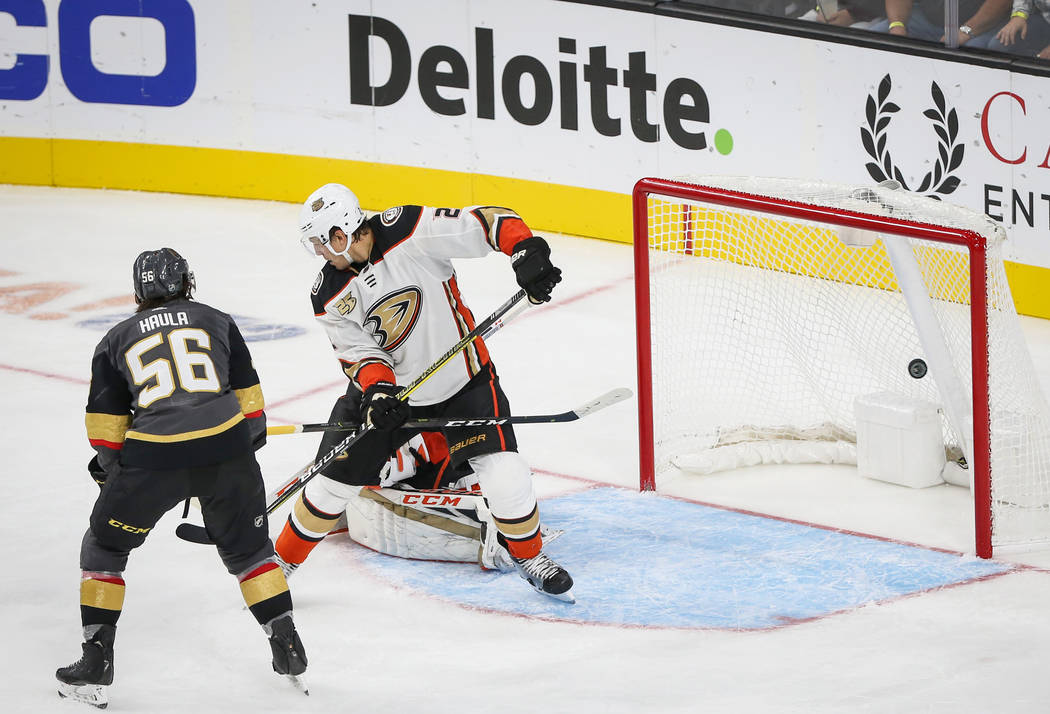 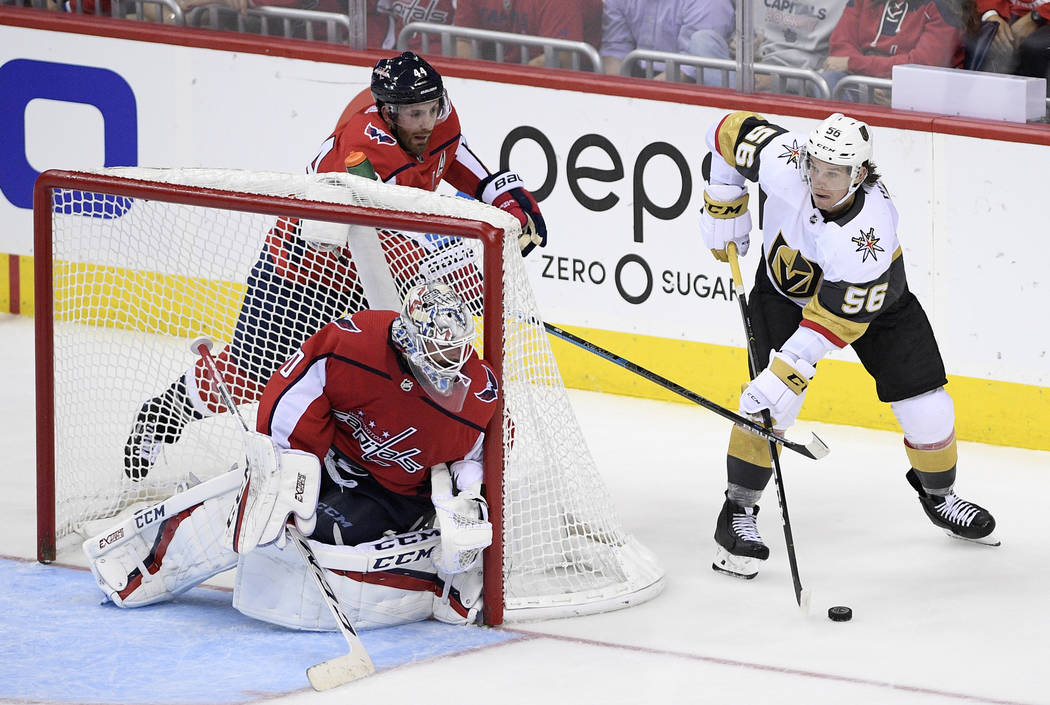 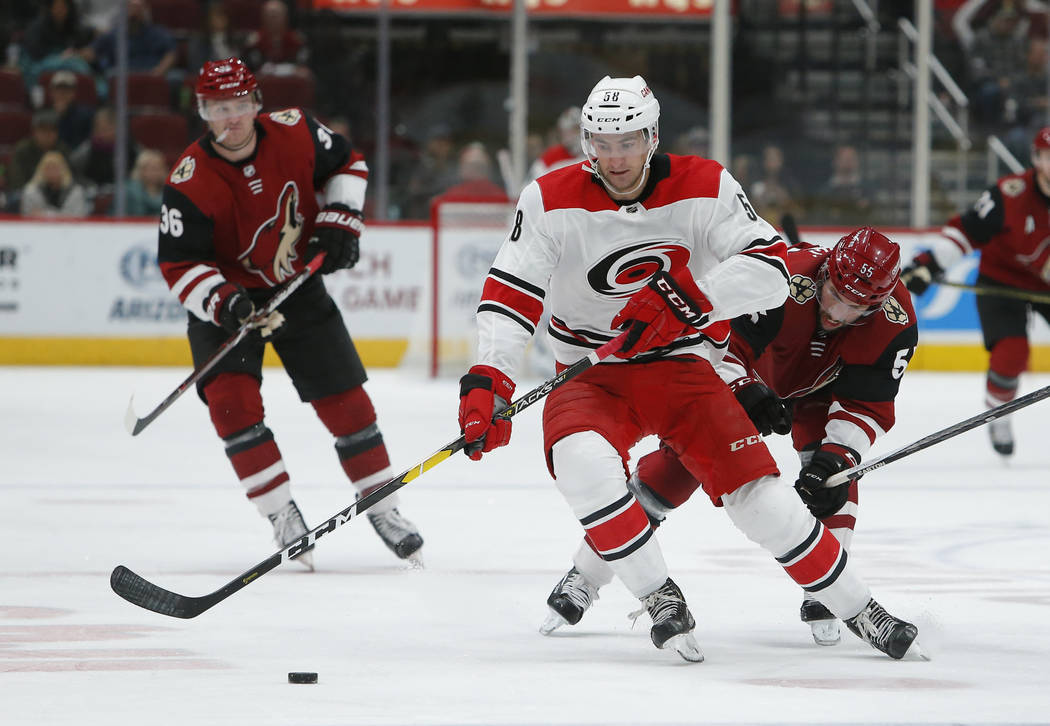 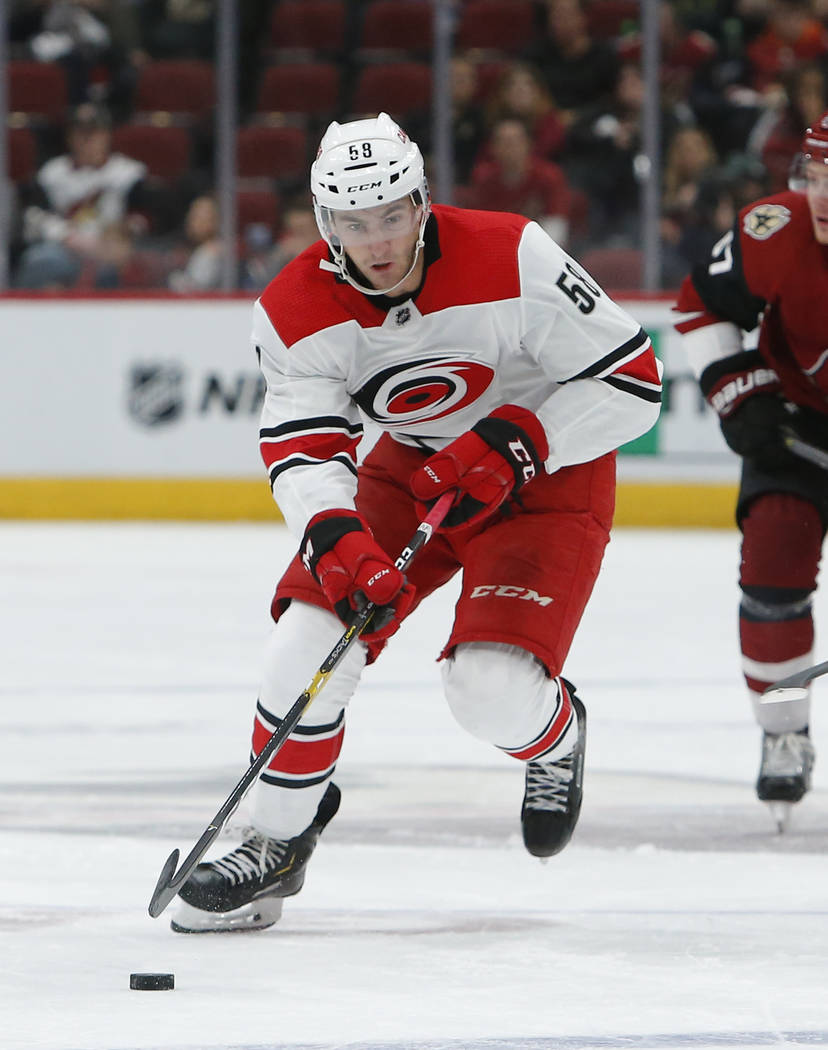 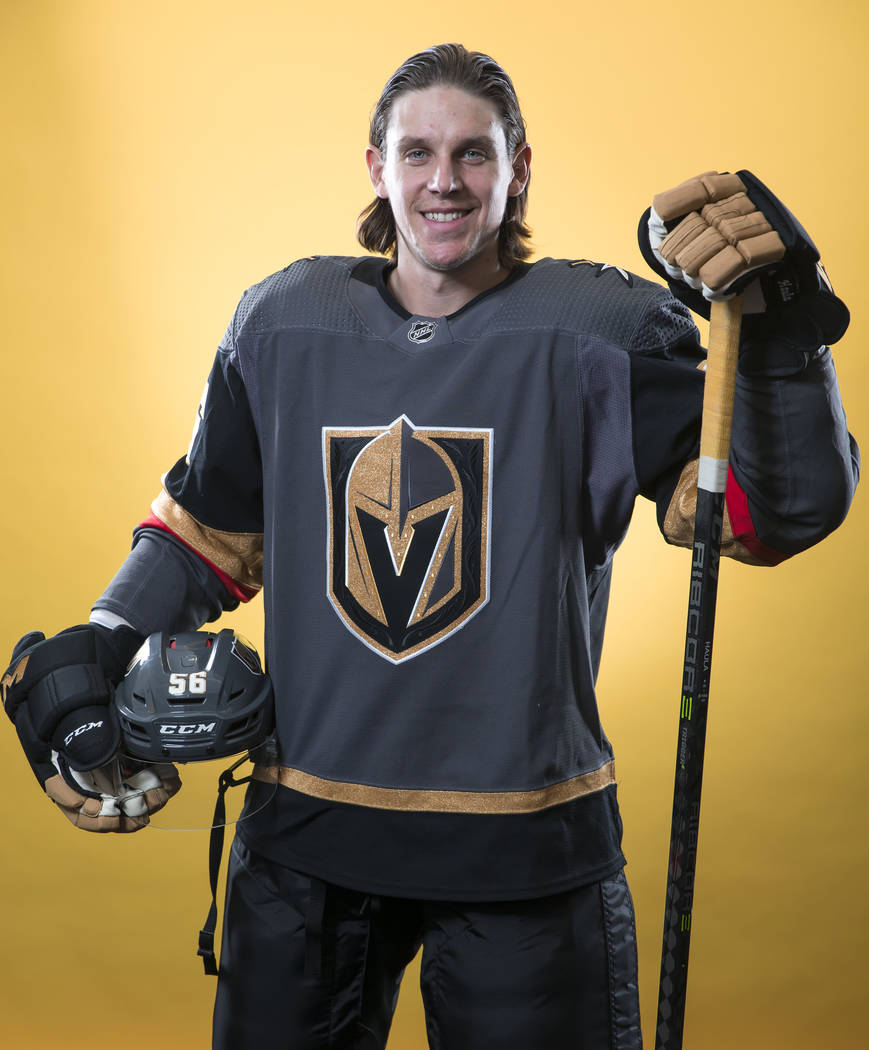 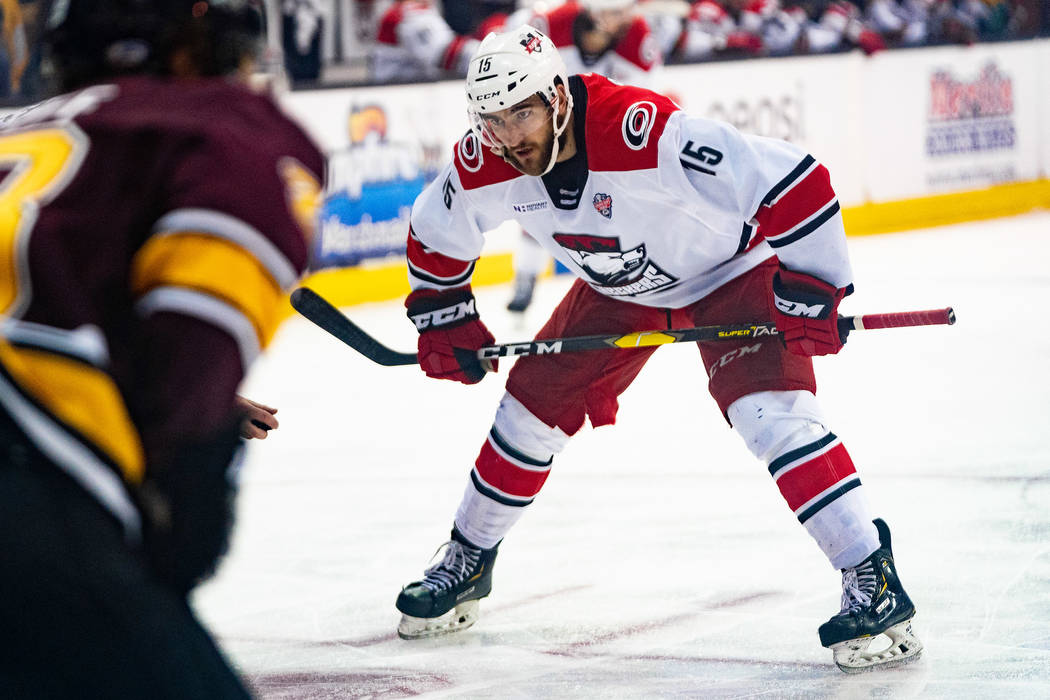 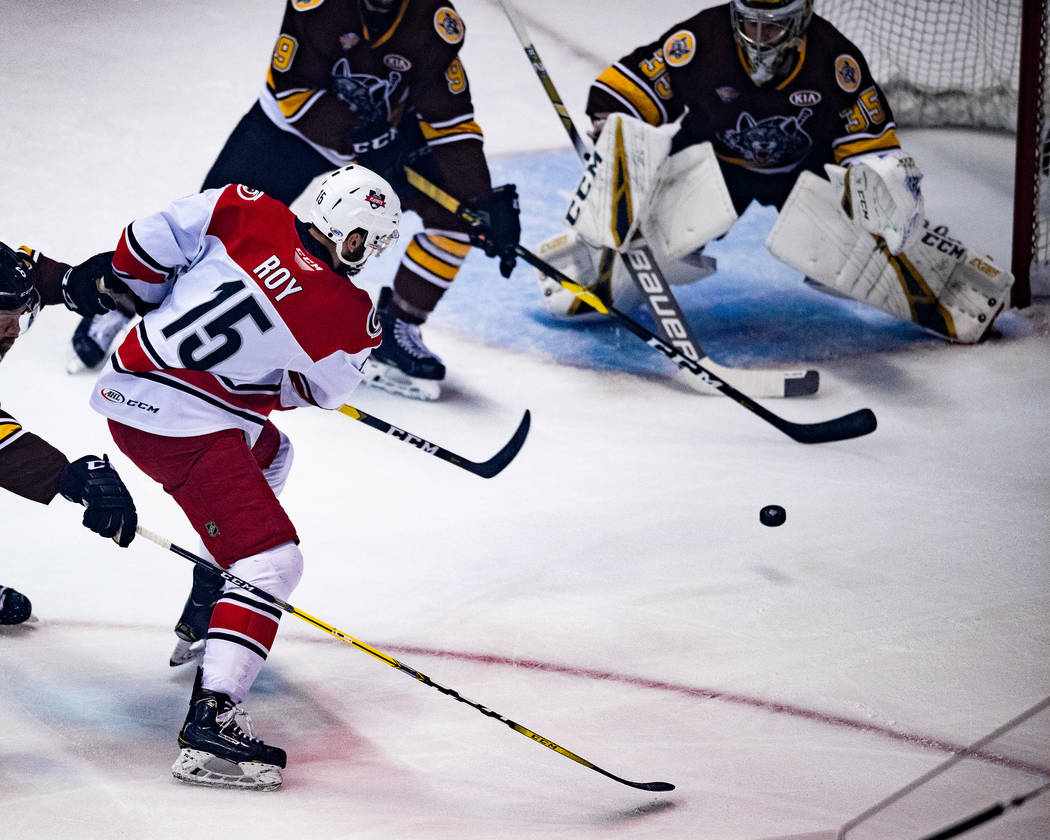 George McPhee conceded that the Golden Knights would have to make moves to get under the salary cap. The first one came Wednesday.

In exchange for Haula, who missed most of last season after undergoing knee surgery, the Knights received 22-year-old forward Nicolas Roy from the Hurricanes and a conditional fifth-round pick in 2021.

“We are going to have to make a few moves,” McPhee, the incoming president of hockey operations, said Tuesday. “We’ve planned for that. We are going through that exercise right now, and when we’re done, we’ll talk about it and explain it.”

Haula played 15 games last season and had two goals and seven points before he suffered a season-ending knee injury Nov. 6 at Toronto. He posted a career-high 29 goals and 55 points in his first season with the Knights.

The 28-year-old Haula has one year remaining on his contract that has a $2.75 million salary cap hit for the upcoming season.

“Erik is a skilled, experienced player who has been productive at even strength and on special teams,” Carolina general manager Don Waddell said. “We expect him to be healthy and ready to go for training camp.”

By dealing Haula, the Knights currently sit approximately $4.775 million over the $81.5 million salary cap for next season.

The move also clears room on the third line for Russian wing Nikita Gusev to join center Cody Eakin and right wing Alex Tuch. Gusev, a restricted free agent, has yet to sign a contract.

“We’ll work around the edges a little bit,” McPhee said Tuesday. “And typically, like every other year, there are four or five changes on your roster. But for the most part, we’re going to keep this group that’s done so well here together.”

Roy, who uses the English pronunciation of his last name according to an interview with the Hurricanes’ website, has made seven appearances over the past two seasons with Carolina, including six games this year. He has yet to record a point in the NHL.

Vegas management got a close look at the 6-foot-4-inch, 215-pound center when he scored three goals and added an assist to help lead the Charlotte Checkers to a Calder Cup series win over the Knights’ American Hockey League affiliate Chicago Wolves this month. He had six goals and 15 points in 19 postseason games.

He won the Guy Carbonneau Trophy as the best defensive forward in the Quebec Major Junior Hockey League in 2017 and was a first-team All-Star in his final two seasons in the league.

Roy is in the final year of his entry-level contract that comes with a $720,000 salary cap hit. He is expected to play in the AHL but could compete for a role as the Knights’ fourth-line center.

“I was lucky to play against Vegas in Vegas with the ’Canes early in the season,” Roy told the Knights’ website. “I could tell it was the best crowd, and it was so fun to play there. I’m so excited to be traded here.”

Haula was acquired along with Tuch at the expansion draft, and the speedy second-line center helped the Knights reach the Stanley Cup Final in the club’s inaugural season.

He finished second on the team in goals behind William Karlsson and led the Knights in power-play goals with 12.

Haula shifted to right wing at the start of last season and was slow to acclimate before moving back to his natural position when center Paul Stastny was injured in the third game.

But during the third period of a loss at Toronto, Haula was driven hard into the boards by Maple Leafs forward Patrick Marleau and went down clutching his right knee. He was removed from the ice on a stretcher and missed the final 67 games.

Haula was seven to 10 days away from returning to practice during the postseason, according to McPhee, and said after the season he was looking forward to next season.

Haula even participated in the Battle for Vegas charity softball game June 15 at Las Vegas Ballpark.

“I think we definitely have one of the best teams in the league,” Haula said in April. “It’s exciting obviously to be part of this group and get back on the ice with them. We’re going to be really good, and that’s exciting. I’m doing everything I can to be a part of it.”