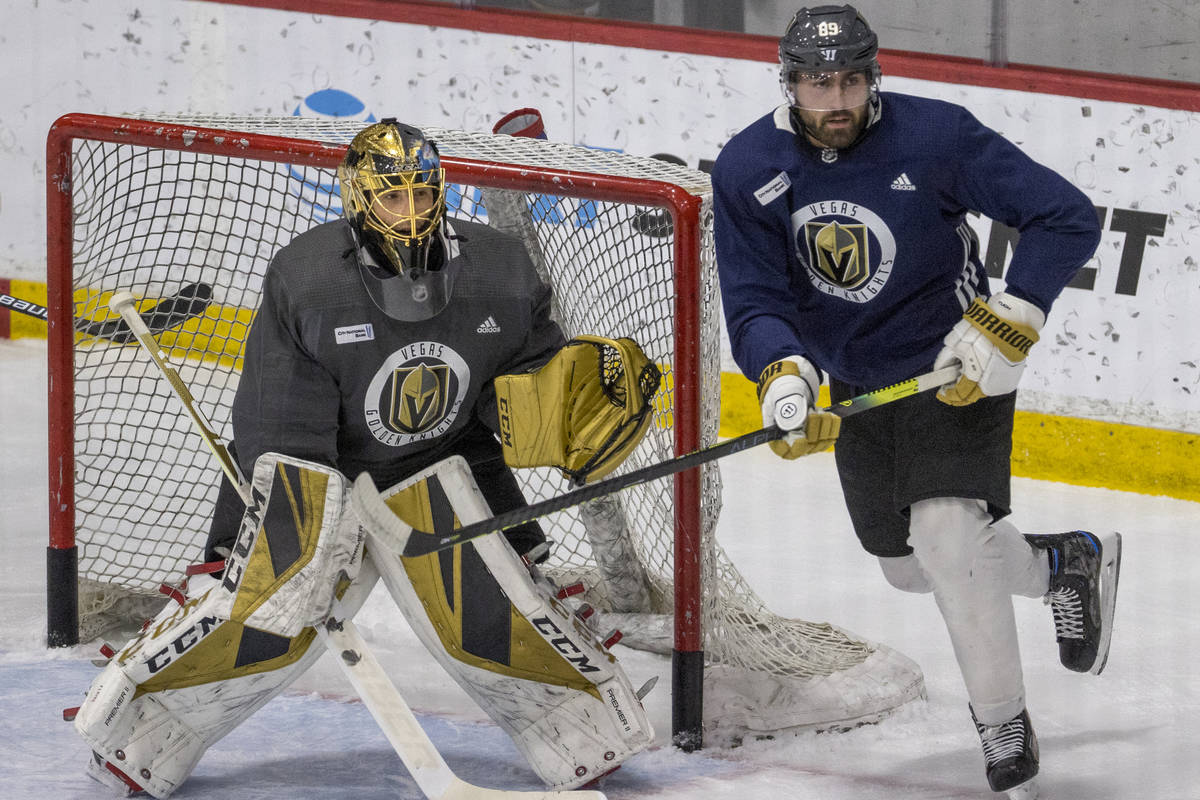 Alex Tuch is in jeopardy of missing the Golden Knights’ season opener. Again.

The winger did not participate in Sunday’s practice at City National Arena and is considered day to day with an undisclosed injury, according to coach Pete DeBoer.

“I don’t anticipate it being long term, but I said that three days ago and he still didn’t skate,” DeBoer said. “All the reports that we have is it’s nothing serious … but we’ll see when we get him back on the ice.”

Goaltender Robin Lehner also was not on the ice Sunday. DeBoer said he was given a maintenance day to nurse a minor issue.

Tuch did not skate in Saturday’s closed-door scrimmage at T-Mobile Arena and has not been on the ice for practices available to the media since Wednesday. Tuch missed Tuesday’s workout for maintenance after practicing Monday.

Tuch has never appeared in a season opener during his NHL career. He opened 2017-18 in the American Hockey League and was on injured reserve to start the past two regular seasons.

Should Tuch need to go on long-term IR, that would solve the Knights’ salary cap conundrum ahead of Thursday’s home opener against Anaheim. Teams must be salary cap compliant by Tuesday afternoon.

Tuch carries a salary cap hit of $4.75 million. The Knights are projected to be over the cap by approximately $125,000 should defenseman Carl Dahlstrom ($850,000 cap hit) be placed on waivers in the coming days.

Gage Quinney skated on the third line with center Cody Glass and right wing Nicolas Roy during Sunday’s practice and could fill in if Tuch remains sidelined.

Another option could be 2019 first-round pick Peyton Krebs, who is in Las Vegas and quarantining after he played for Team Canada in the World Junior Championship.

“I believe (Krebs is) due out any day now,” DeBoer said. “I don’t have the exact time frame, but I know it’s soon.”

Closer to a captain?

The Knights are off Monday, and DeBoer is scheduled to meet with general manager Kelly McCrimmon and president of hockey operations George McPhee. One of the items on the agenda is whether to name a captain.

DeBoer said after the playoffs he expected to name a captain for the first time in franchise history prior to the start of this season. McCrimmon has been less open on the subject except to say the team would decide before Thursday’s opener.

“I’m hopeful we can come to some conclusions there,” DeBoer said.

Details of Saturday’s full-squad scrimmage, which was off-limits to the media, are scarce, but two players stood out.

Max Pacioretty’s agent posted on Twitter that the left wing had a four-point effort, including a pair of goals. Defenseman Alex Pietrangelo also drew rave reviews and was called a “beast” by Pacioretty.

“I thought he controlled the game,” DeBoer said. “Scored, set up plays, defended well. He really turned it up a level. When he does that, he controls all facets of the ice, both in your own end and the offensive zone. It was pretty impressive to see it firsthand live in a Vegas uniform.”