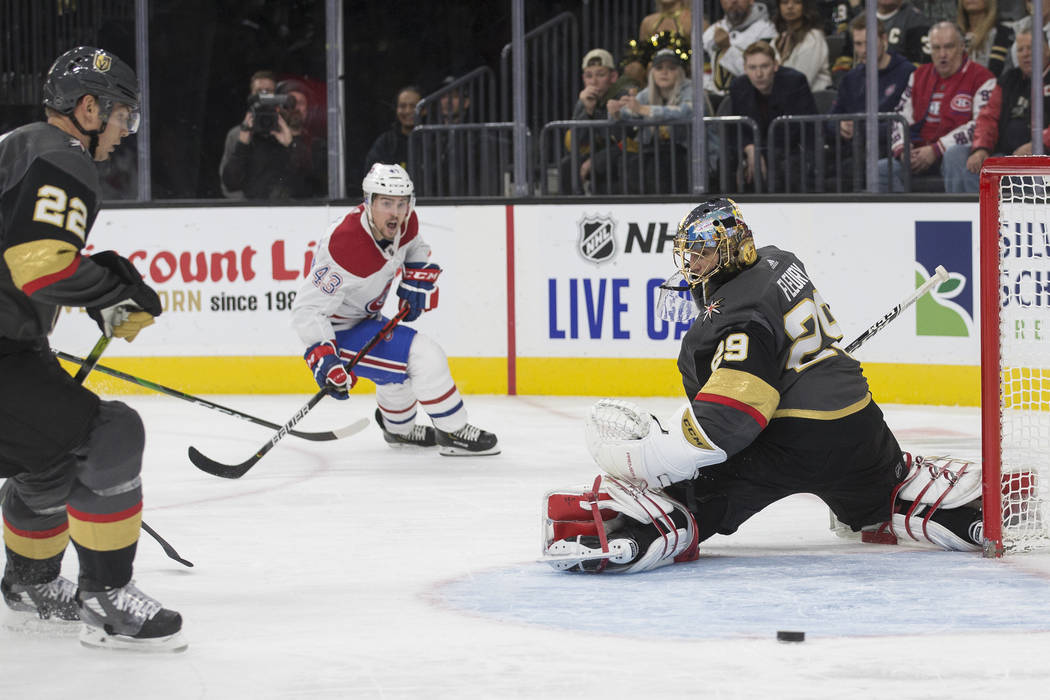 COLUMBUS, Ohio — Right wing Alex Tuch did not travel with the Golden Knights for the start of their four-game road trip and remains day to day with an upper-body injury.

“I heard nothing but positive, but I really haven’t heard a lot, to be honest with you,” coach Gerard Gallant said following practice Monday at Nationwide Arena. “It’s an upper-body, that’s all I’m going to tell you. … He could join us, but he didn’t make the trip.”

Tuch was hurt during the second period of Saturday’s 4-3 overtime loss to Winnipeg when he appeared to take an elbow to the face from Jets left wing Adam Lowry before being driven into the glass.

Gallant declined to confirm whether Tuch was in concussion protocol.

Lowry was not penalized on the play, and the NHL Department of Player Safety did not issue any supplemental discipline to Lowry, who was playing his first game after a two-game suspension for boarding Calgary’s Oliver Kylington.

With Tuch sidelined, the Knights recalled center Nicolas Roy along with defenseman Nic Hague from the American Hockey League on Monday.

Roy made his season debut Oct. 27 against Anaheim and scored his first career NHL goal. He skated at center on the fourth line between William Carrier and Ryan Reaves during practice and is in line to play against Columbus on Tuesday.

Hague has appeared in eight games for the Knights with two assists, though he is expected to be a healthy scratch based on the defense pairs at practice.

The Knights now have the maximum 23 players (14 forwards, seven defensemen, two goalies) on the active roster.

“We called them up; they’re playing real well down in Chicago,” Gallant said. “Obviously with the Tuch injury we brought them up and we’ll see if we’re going to use them.”

Goaltender Marc-Andre Fleury was a full participant in practice after missing Saturday’s game due to the flu. He is expected to be available for Tuesday’s game, though Gallant did not name a starter.

Fleury said he started to feel poorly after the 5-4 overtime loss against Montreal on Thursday, then woke up Friday and felt the full effects. He was well enough to travel with the team Sunday.

Monday’s practice was the first time he skated in three days.

“It was maybe a rough couple of days, but it felt good to get on the ice,” Fleury said. “It feels like it’s been a while now. It’s good to sweat and move around.”