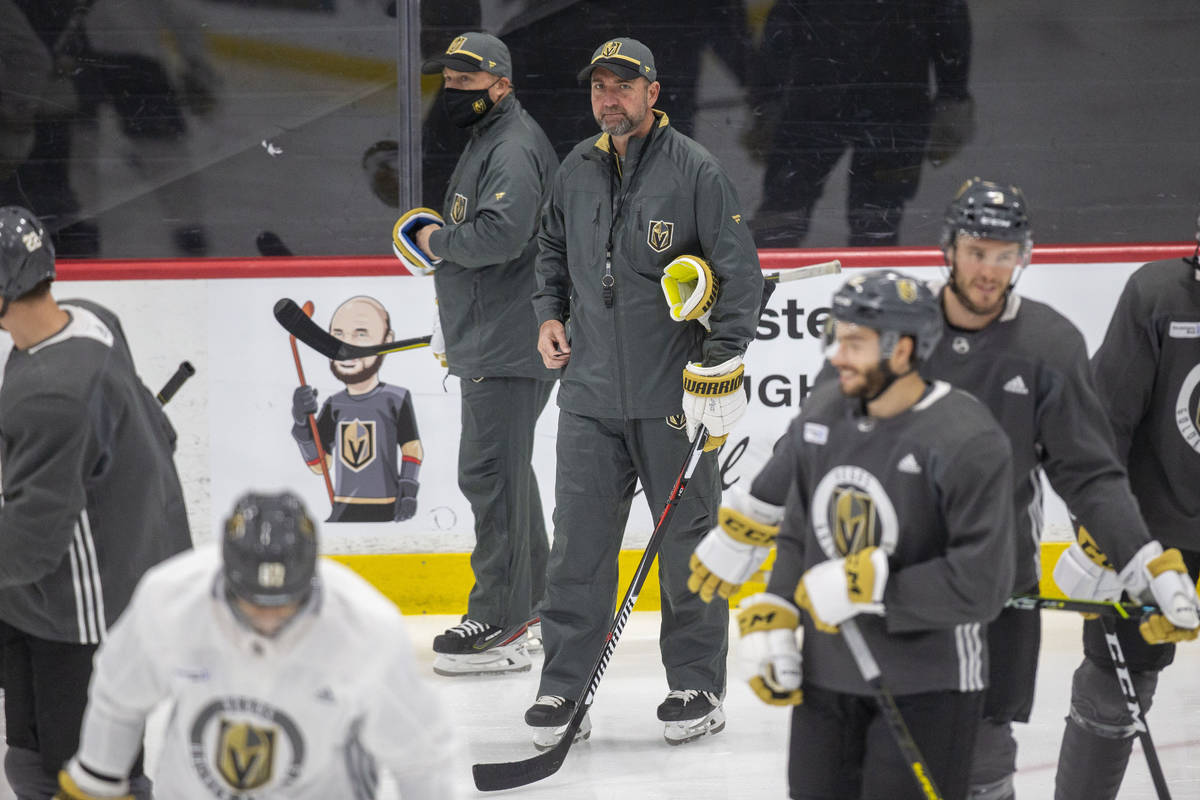 The early portion of the Golden Knights schedule helped to prepare them for the stiffer test that awaits with two games against St. Louis starting Tuesday at T-Mobile Arena.

“It’s a good measuring stick-type game or series against this team to see where we’re at,” Knights coach Pete DeBoer said Tuesday after morning skate. “It’s a good test for us. I like the fact we played the way we did last game against Arizona going into this game. We’ve got to build on that.”

The Knights swept the season-opening, two-game series against Anaheim, which is rebuilding after finishing out of the playoffs for the second straight season. The Coyotes provided a stiffer test in the recently completed four-game series that saw the Knights take six of a maximum eight points.

But St. Louis represents a step up. The Blues captured the Stanley Cup in 2019 and were leading the Western Conference standings when last season was paused because of the coronavirus pandemic.

St. Louis has claimed at least one point from all nine regular-season meetings against the Knights.

But the Knights won two straight in overtime last season and earned a 6-4 victory when the teams met during round-robin play to determine seeding for the playoffs.

With the Knights off to a 5-1 start and leading the NHL in points percentage, Knights forward Ryan Reaves said the series is just as much of a test for the Blues as it is for the Knights.

“We’ve had six games to work ourselves into what our game should look like and now you get the test of one of the best teams in the league, which is what you want to see where you’re at,” DeBoer said.

The recent snowfall across the Las Vegas Valley was a welcome sight for many of the Knights, with DeBoer joking that it felt like he was back in Canada.

Winger and temporary meteorologist Reilly Smith noted it was much needed after the lack of precipitation in the area over the past several months.

“Just to see anything fall from the sky around here is kind of nice,” he said. “I’m sure a lot of the guys’ kids and dogs appreciate today.”

DeBoer did offer the classic observation that comes whenever a drop of water hits the local roads.

“I haven’t enjoyed the drivers as much,” DeBoer griped. “I think they’re getting used to it, but the snow’s been great.”

When center Paul Stastny was traded to Winnipeg in October, part of the deal was a 2022 conditional fourth-round pick headed the Knights’ way.

Paul Stastny played in his fifth game with the #NHLJets on Saturday night.

As a result, Winnipeg will now send their 2022 4th RD pick to the Vegas Golden Knights to complete the trade that the two teams made back on Oct 9, 2020.https://t.co/ASLsOlUZOZ

The conditions of the pick were met over the weekend when Stastny appeared in his fifth game for the Jets.

The Knights recouped the 2022 fourth-rounder they traded to Detroit to move up and select goalie Jesper Vikman of Sweden in the most recent draft. They have nine picks in all during the 2022 draft and also own Winnipeg’s fourth-round pick in 2021 from the Cody Eakin trade.