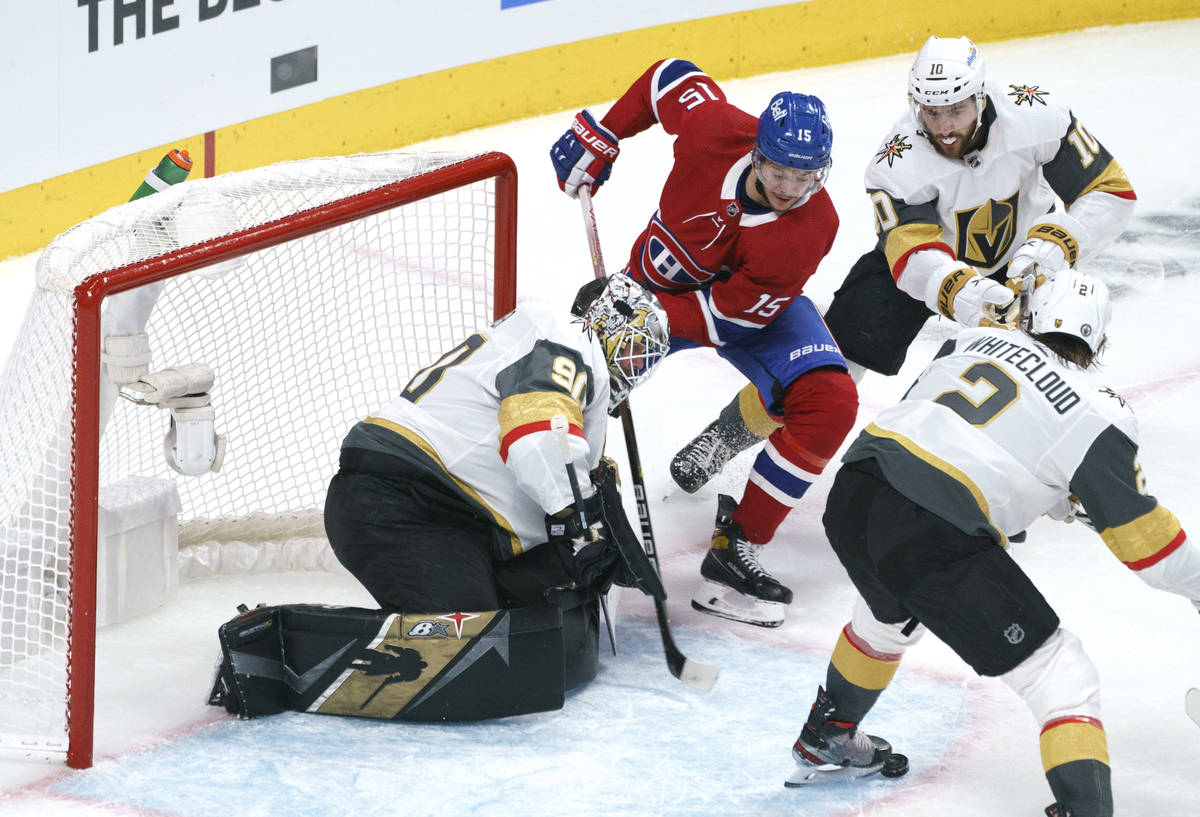 The Golden Knights are making a goaltending change for Game 4 of their NHL semifinal against the Montreal Canadiens on Sunday.

Robin Lehner will start at Bell Centre in his second postseason appearance. Lehner’s first start came May 30 in Game 1 of the second round against the Colorado Avalanche. The Knights lost 7-1. Lehner’s last appearance before that was May 10.

Marc-Andre Fleury has been the Knights’ primary postseason starter and for the most part has been excellent. The Vezina Trophy finalist is 9-6 with a .921 save percentage and 1.97 goals-against average. He has the fourth-most wins in NHL playoff history with 90, two behind Grant Fuhr for third place.

Fleury did misplay a puck late in Game 3 that led directly to Montreal right wing Josh Anderson’s game-tying goal with 1:55 left in the third period.

Anderson scored again in overtime to give the Canadiens a 2-1 series lead.

“You saw what they did this year,” Whitecloud said. “You saw what each one could do. I think I speak for all the guys on the team, we have confidence in both of them. We’re going to go out and get the job done.”

Lehner and Fleury were the best goaltending tandem in the NHL this season. They won the Jennings Trophy for allowing the fewest goals in the league.

Fleury did most of the heavy lifting after a concussion forced Lehner to miss more than a month. Fleury was 26-10 with a 1.98 goals-against average and .928 save percentage in the regular season. He also moved into third place on the all-time regular-season wins list.

Lehner was 13-4-2 with a 2.29 goals-against average and .913 save percentage. His one playoff start went poorly, but he played well for the Knights last postseason.

He was 9-7 with a 1.99 goals-against average and .917 save percentage. Lehner becoming the primary starter that playoff run didn’t sit well with Fleury’s agent, Allan Walsh, who tweeted a picture of his client with a sword in his back. The word “DeBoer” was written on the sword.

The Knights still brought both goaltenders back and reaped the rewards by tying for the most regular-season points in the NHL. They’ve mainly used Fleury in the playoffs, but they’re turning to Lehner in a key spot Sunday.

“I’m sure (Lehner will) be ready,” left wing William Carrier said Sunday morning. “We’ve got a great combination of two goalies. They can play. Obviously, (Fleury) has been hot for us. Whatever they do, I think the team has 100 percent confidence in everyone in there.”

The only other lineup change the Knights made was inserting Patrick Brown at fourth-line right wing in place of Ryan Reaves. Brown has two goals in 11 playoff games and last appeared in Game 1. Reaves’ last shift in Game 3 ended with 14:04 remaining in the third period.

Center Chandler Stephenson remains out with an upper-body injury.

The Canadiens made no changes after their Game 3 overtime win.

Marc-Andre Fleury tells Chicago he will play next year, per reports
By Ben Gotz / RJ

Marc-Andre Fleury was traded from the Golden Knights to the Chicago Blackhawks on Tuesday and has been mulling his future since then.