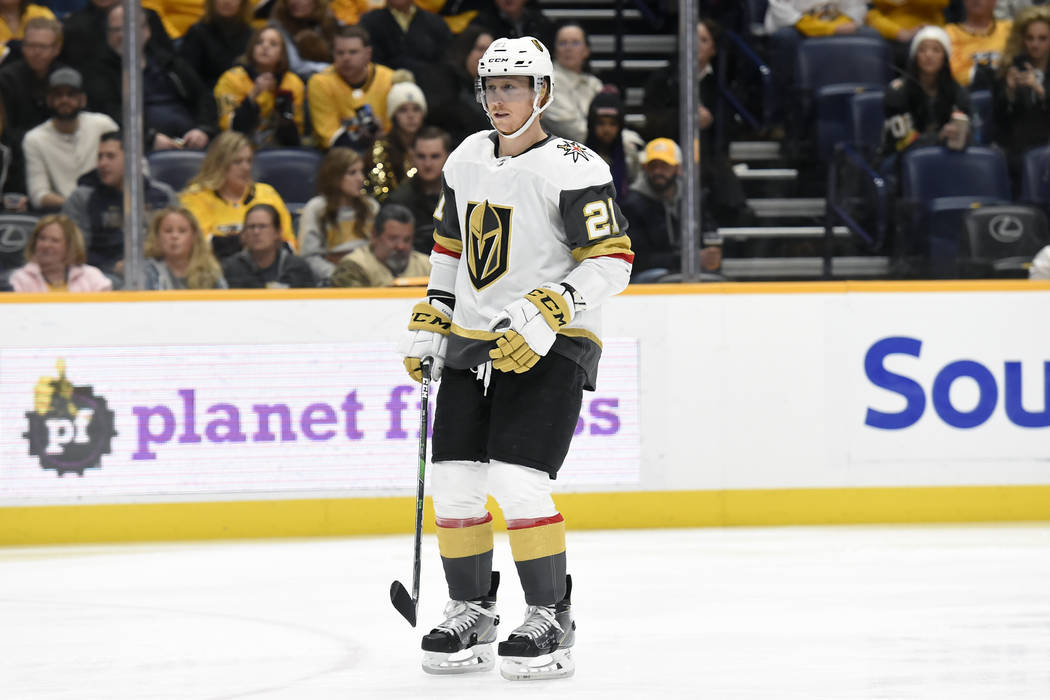 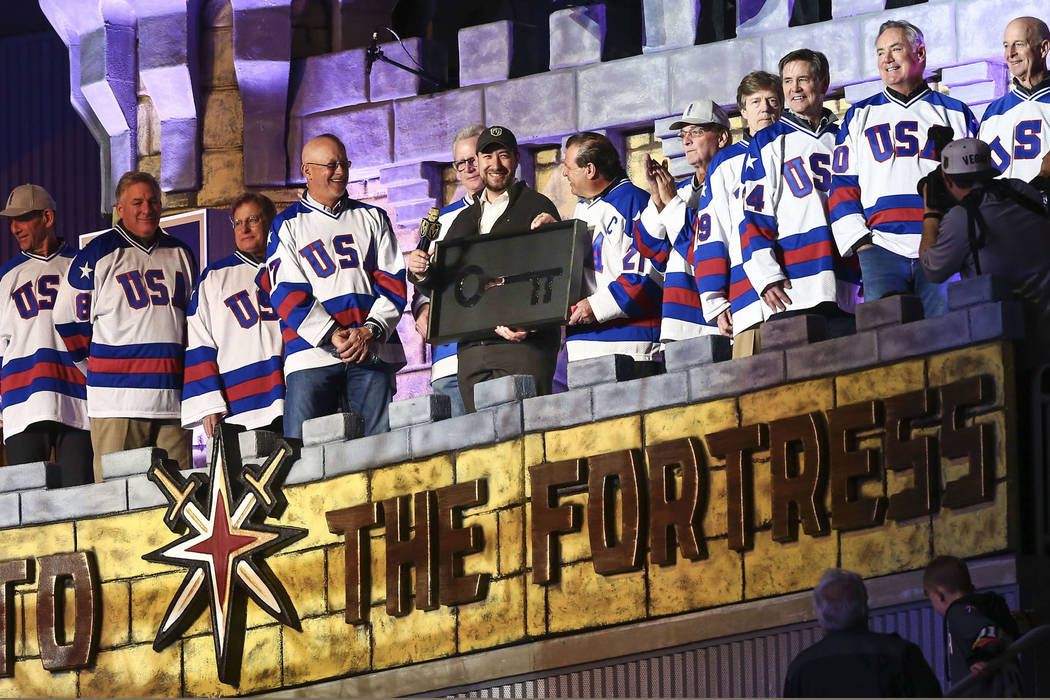 Clark County Commissioner Michael Naft, center, honors the members of the gold medal 1980 "Miracle on Ice" U.S. Olympic hockey team with a key to the Las Vegas Strip before the start of an NHL hockey game between the Golden Knights and the Florida Panthers at T-Mobile Arena in Las Vegas on Saturday, Feb. 22, 2020. (Chase Stevens/Las Vegas Review-Journal) @csstevensphoto 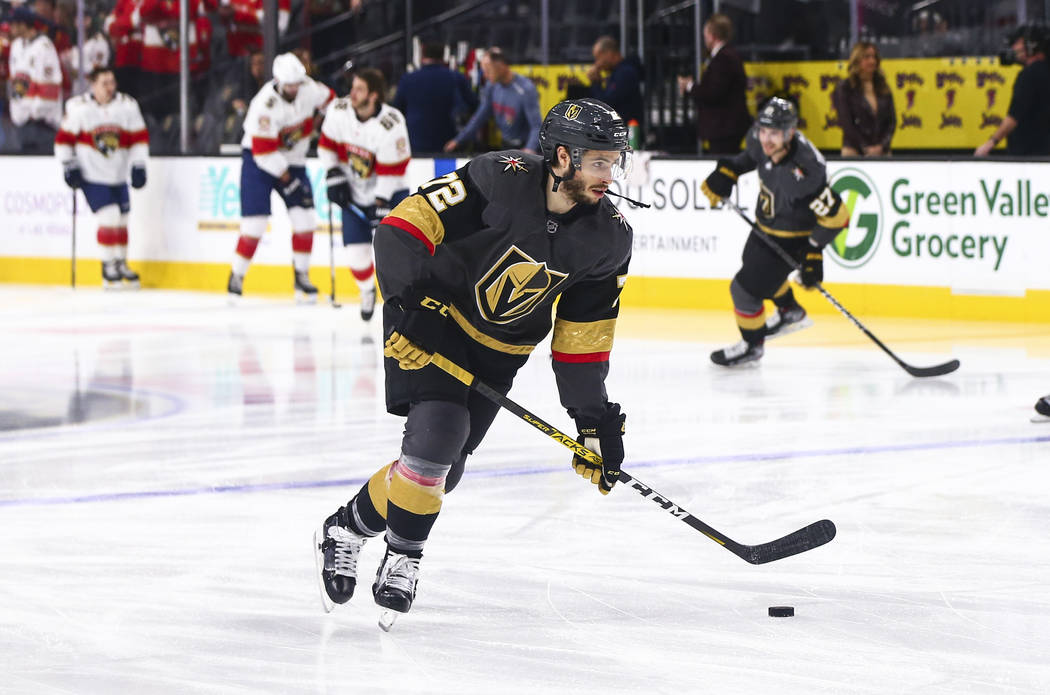 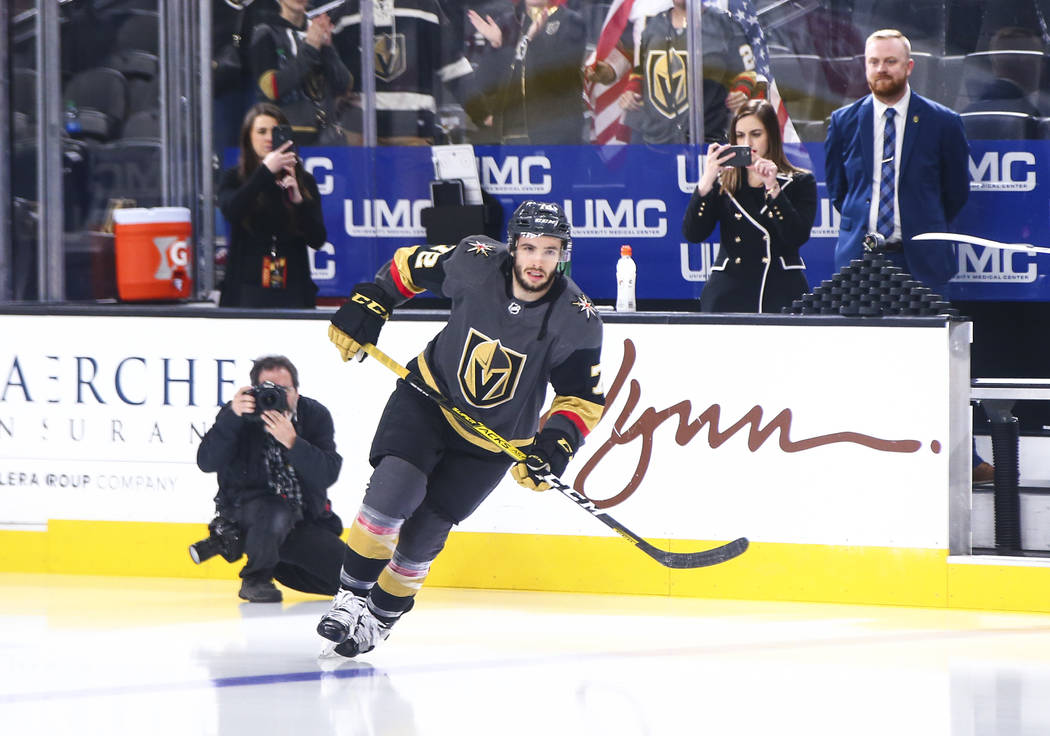 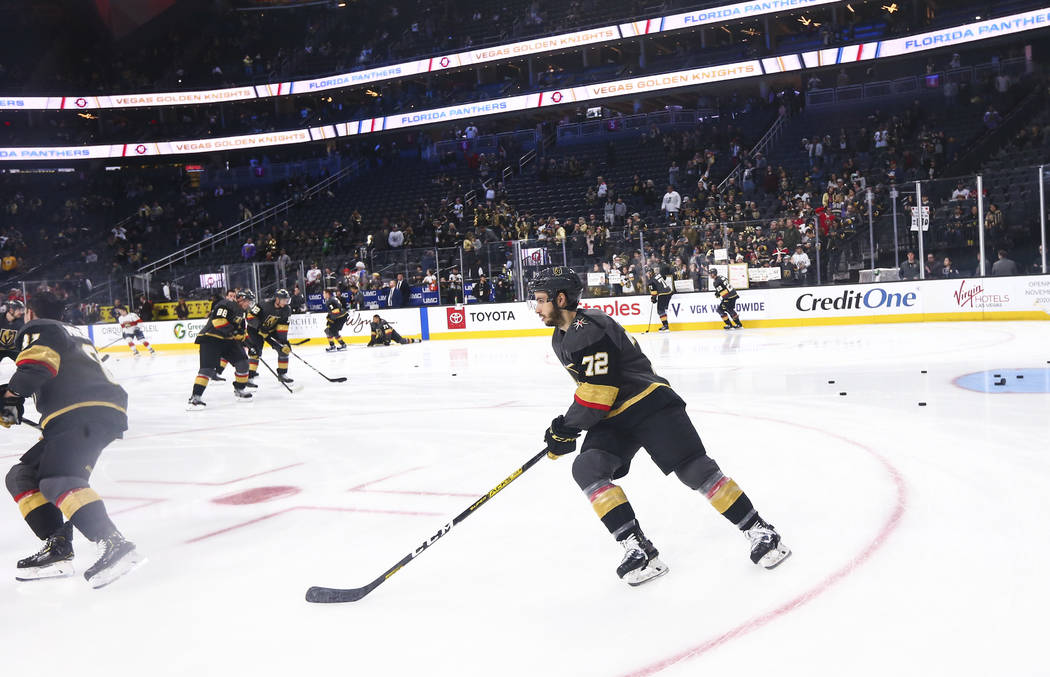 While there may have been a contingent of Golden Knights fans celebrating the departure of Cody Eakin on social media, the mood inside the team’s locker room was dramatically different.

“It’s an awful business,” forward Jonathan Marchessault said of his teammate’s trade to Winnipeg. “People think life is so easy and fun here, which it is, but that part of it is never the best. He’s been a great teammate, but a better friend. He’s always been there for everyone on this team since the beginning. He’s a treat of a person to be with and he’s going to be missed.

General manager Kelly McCrimmon said the deal to ship Eakin out for a conditional draft pick was based on the team’s salary cap situation and the emergence of several players, namely Chandler Stephenson and Nicolas Roy, who would be best utilized with more time playing center.

“I’d like to thank Cody for his time here,” McCrimmon said. “He was an original member of our organization and a great person, just a tremendous young man. We wish him the best in Winnipeg.

“We ended up in a situation where we were full up the middle, which is a good problem to have.”

The clearance of extra salary cap space has led to speculation another move is imminent. McCrimmon said that’s not necessarily the case, though he vowed to be hard at work at making the roster as solid as possible before Monday’s trade deadline.

Marchessault said the team has trust in the front office.

“Nobody is ever safe,” he said. “It’s just the way it goes sometimes and they probably did the move because something else is coming so it’s on us to be good. You can’t worry too much about that. I like to follow (the rumors), but it’s all speculation.”

The 1980 U.S. Olympic hockey team was honored by the Knights in a pre-game ceremony with most of the players, hosted by Al Michaels.

There were also video tributes throughout the game to the authors of the “Miracle On Ice.”

Dave Christian, a defenseman on the team, said the remembrances never get old even after 40 years.

“It’s pretty unbelievable,” he said., “It’s kind of, at times, mind-boggling to think a hockey game had that much impact on that many people.

“It’s been really incredible to hear so many people who want to share stories of where they were or who they were with. Sometimes now it’s even what it meant to their parents since there’s fewer people now who remember it themselves. There’s a lot of pride in hearing those stories.”

After morning skate, Martinez was seen having a conversation with Whitecloud in the locker room.

“That stuff happens naturally,” DeBoer said of his veteran players taking the initiative to communicate with the youngsters. “ We’ve got a great room and I think that stuff just gets taken care of. That shows you the leadership in the room.”

McCrimmon wasn’t able to provide much detail on the knee injury suffered by Cody Glass during a game with the AHL affiliate Chicago Wolves on Thursday.

“As you know, Cody was injured in the game on (Thursday) so he’s out of the lineup right now,” McCrimmon said. “We’ll monitor that and provide more information when we have it.”

Glass was sent down to work on his conditioning before a return to the NHL lineup after missing an extended stretch of games with a previous lower-body injury.

McCrimmon didn’t have an update on Alex Tuch, either. Tuch, who has been out since suffering a lower-body injury against St. Louis on Feb. 13, was placed on injured reserve Wednesday.

According to McCrimmon, neither injury will impact the team’s decision-making process heading into Monday’s trade deadline.