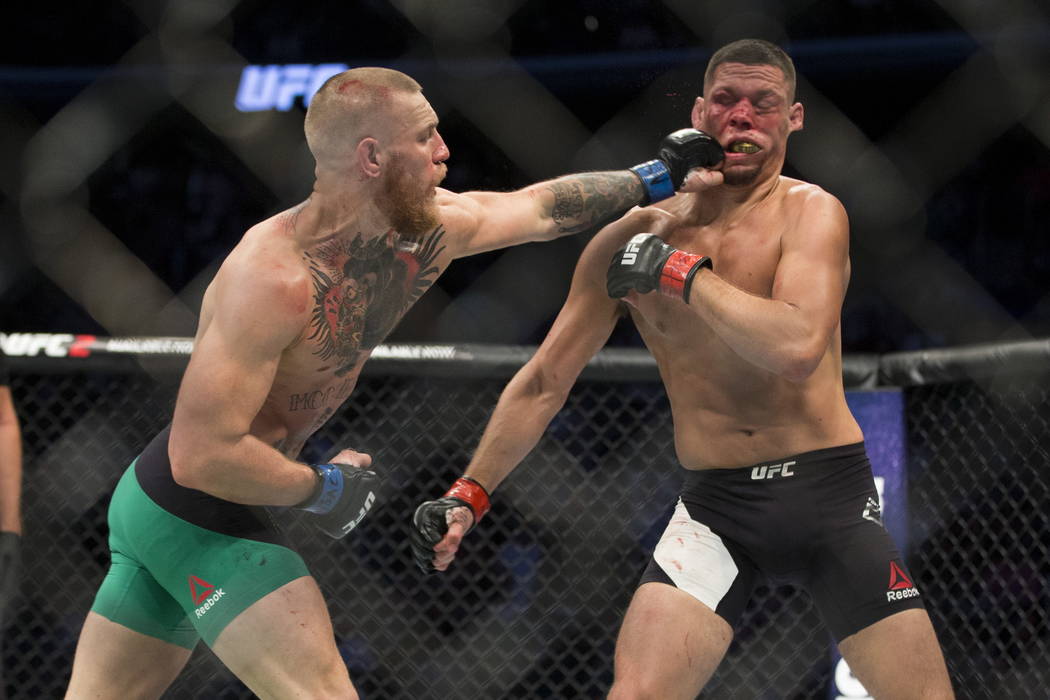 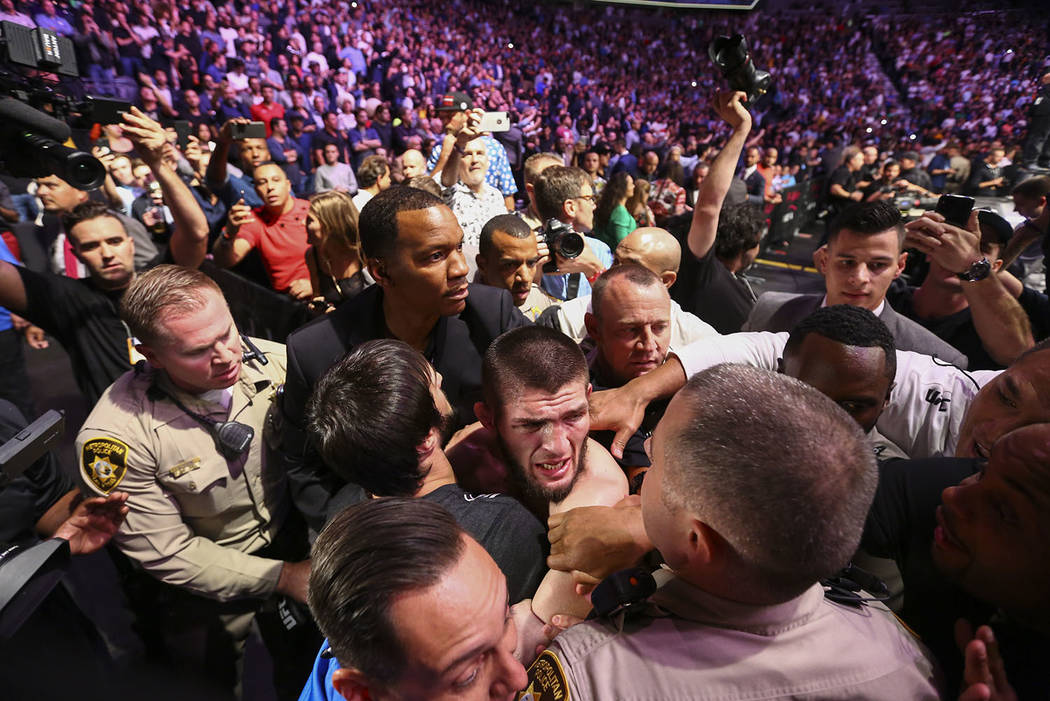 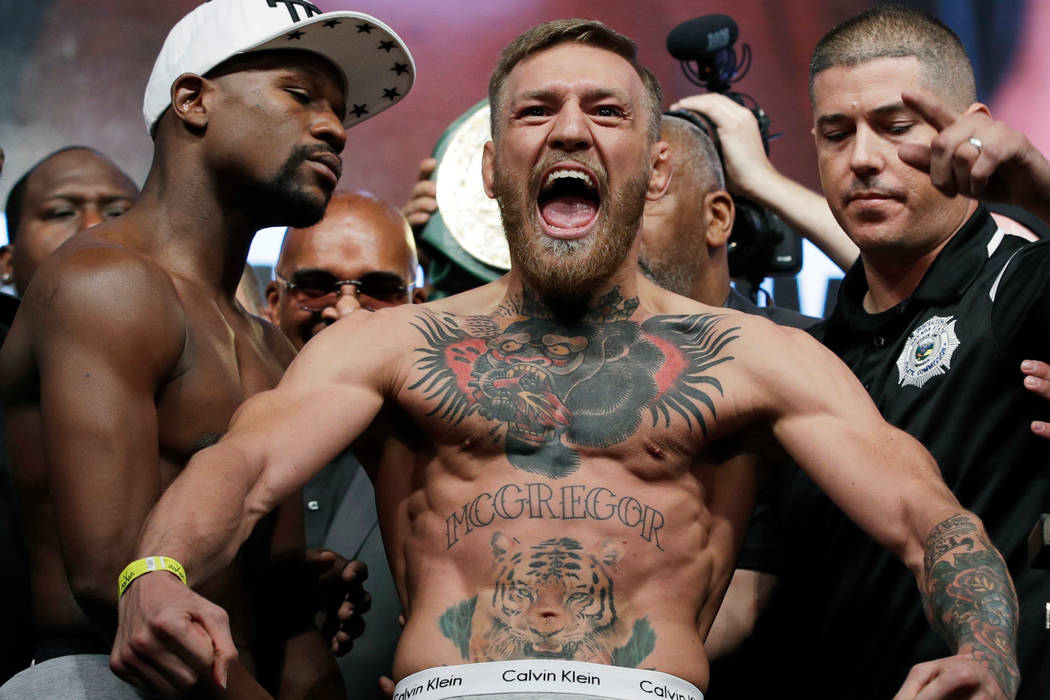 Conor McGregor, center, stands next to Floyd Mayweather Jr., center left, during their weigh-in the day before their boxing match in Las Vegas on Aug. 25, 2017. (AP Photo/John Locher, File) 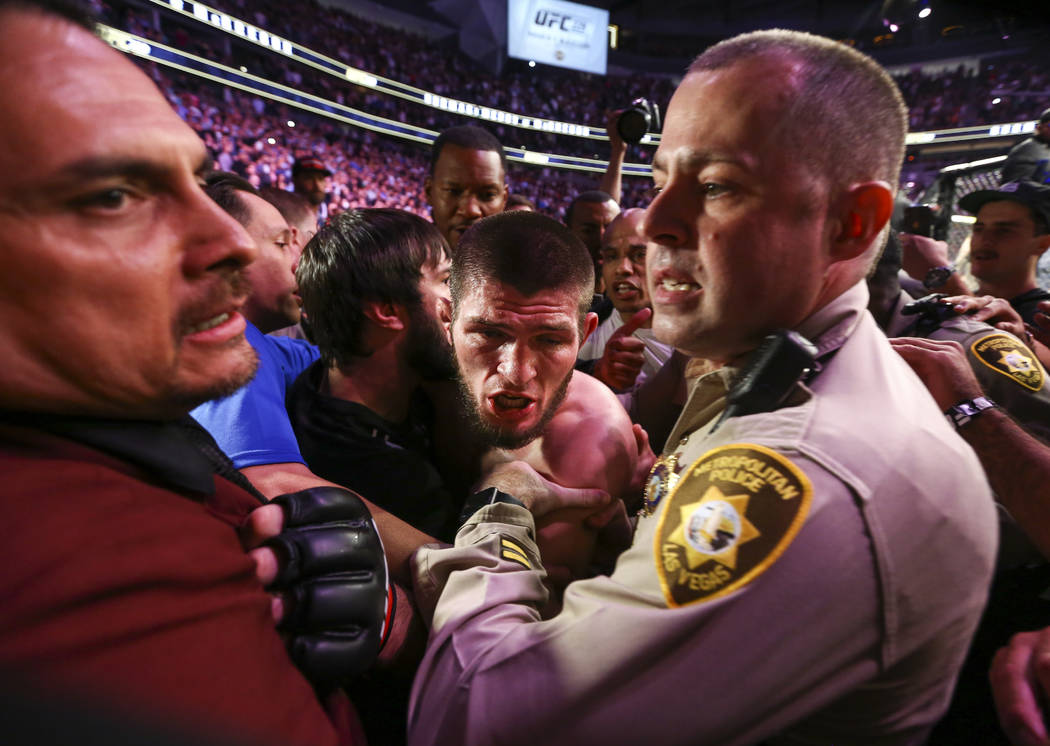 Fighter Khabib Nurmagomedov is held back by Las Vegas police and security following Nurmagomedov's win against Conor McGregor at UFC 229 at T-Mobile Arena in Las Vegas on Saturday, Oct. 6, 2018. Nurmagomedov jumped out of the ring and went after a member of McGregor's camp. Chase Stevens Las Vegas Review-Journal @csstevensphoto

UFC superstar Conor McGregor once vowed to never again fight in Las Vegas after a disagreement with the Nevada Athletic Commission.

He’s since been a part of two of the biggest events in combat sports history in the city and will make his return to the UFC at T-Mobile Arena when he takes on Donald “Cowboy” Cerrone in the main event of UFC 246 on Saturday night.

It will be the latest chapter in a tumultuous — and extremely lucrative — relationship between McGregor and the fight capital of the world.

Since his Las Vegas debut, a first-round knockout of Dustin Poirier at UFC 178 in September 2014, McGregor has competed in Nevada seven times. The number of memorable moments far outnumber that.

His “Mystic Mac” persona was born that week when McGregor predicted he would stop Poirier in the first round.

“You can call me ‘Mystic Mac,’ because I predict these things,” he said after the win.

There was also his dramatic entrance before a July 2015 win over Chad Mendes that earned McGregor a share of his first UFC title.

McGregor had Irish star Sinead O’Connor perform a live version of “The Foggy Dew” as he walked to the cage at UFC 189.

Neither of those moments made the cut of his top five Las Vegas moments:

The phrase that has become so much a part of the MMA lexicon was born at a September 2015 news conference in Las Vegas.

It also marked the start of the collision course McGregor and Cerrone have been on since that day.

Cerrone and McGregor were both participating in separate fights when McGregor made the claim then-lightweight champion Rafael dos Anjos would drop Cerrone as an opponent in a second for the chance to fight McGregor because of all the money involved.

“I can make you rich,” McGregor said to dos Anjos onstage. “I can change your bum life. When you sign to fight me, it’s a celebration. You ring back home, you ring your wife, ‘Baby, we’ve done it. We’re rich, baby. Conor McGregor made us rich, break out the red panties. We’re rich, baby.’

“It’s red panty night when you sign to fight me.”

It was the result of his frustration at the penalty the NAC doled out for McGregor’s role in a bottle-throwing melee during an August 2016 news conference at the MGM Grand Garden.

Nate Diaz and his team walked out due to McGregor’s extreme tardiness. McGregor responded by throwing a water bottle and igniting a barrage of full bottles and cans tossed across the theater with fans and security in the crossfire.

The spectacular finish came on the heels of months of promotion and a world marketing tour. It signified McGregor crossing the threshold from breakout sensation to legitimate superstar.

The buildup to the fight between McGregor and Khabib Nurmagomedov was vicious and nasty, including McGregor being arrested and charged for attacking a bus in New York in an effort to go after Nurmagomedov.

The fight on Oct. 6, 2018 did little to settle their differences. Nurmagomedov leaped from the cage after submitting McGregor and engaged one of McGregor’s teammates, triggering skirmishes in and out of the cage in a wild scene. It’s the last time McGregor competed.

McGregor made one of the biggest single-night paydays in sports history in his pro boxing debut.

His fight against Floyd Mayweather Jr. was a massive success at the box office and one of the biggest spectacles the Strip has ever seen.

McGregor was eventually knocked out in that August 2017 bout, though the crossover event was a massive economic boon for the UFC star — and Las Vegas.