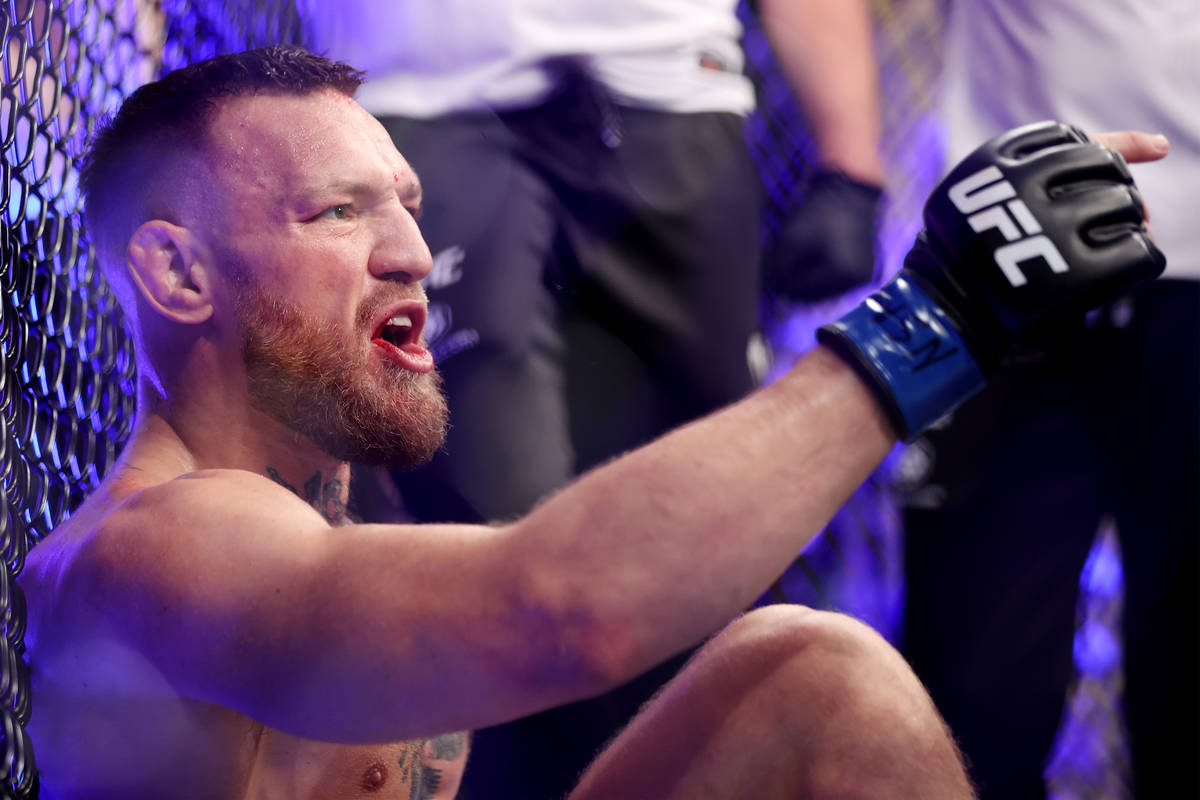 Conor McGregor yells after hurting his foot in the first round of a lightweight bout against Dustin Poirier during the UFC 264 event at T-Mobile Arena in Las Vegas, Saturday, July 10, 2021. Poirier won by way of technical knockout in the first round. (Erik Verduzco / Las Vegas Review-Journal) @Erik_Verduzco 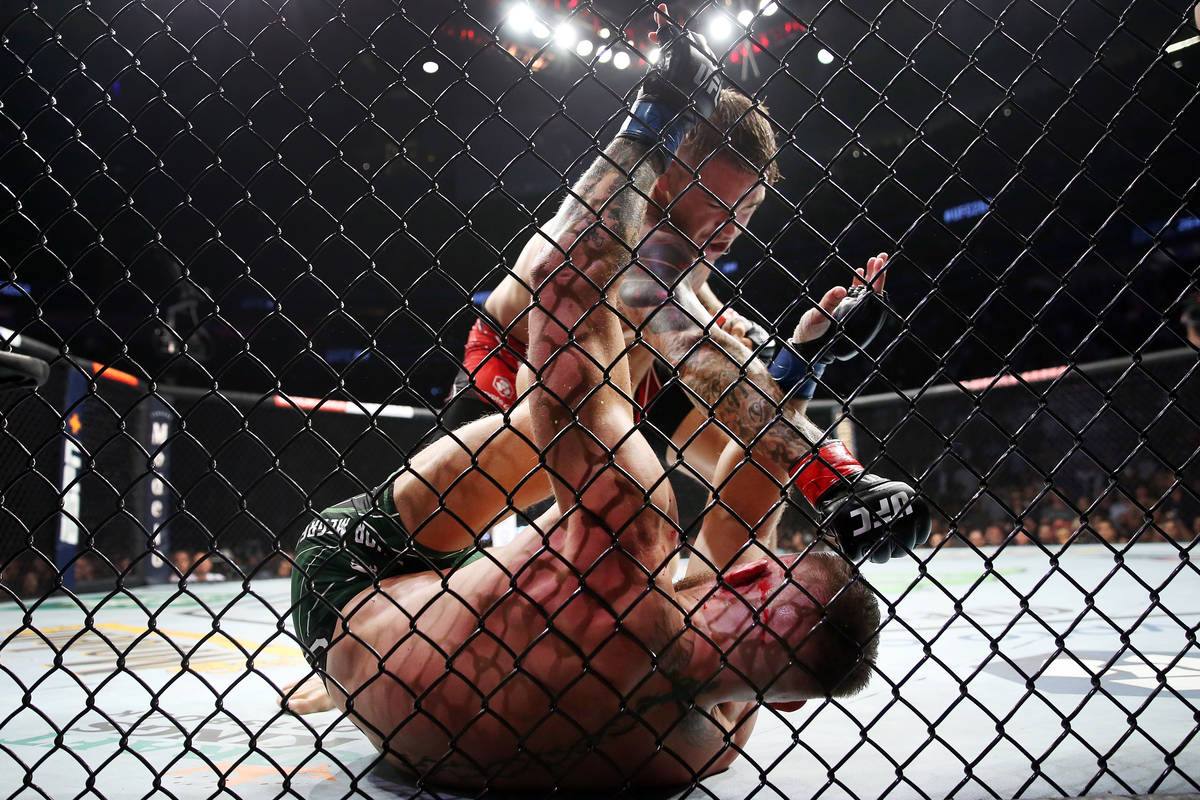 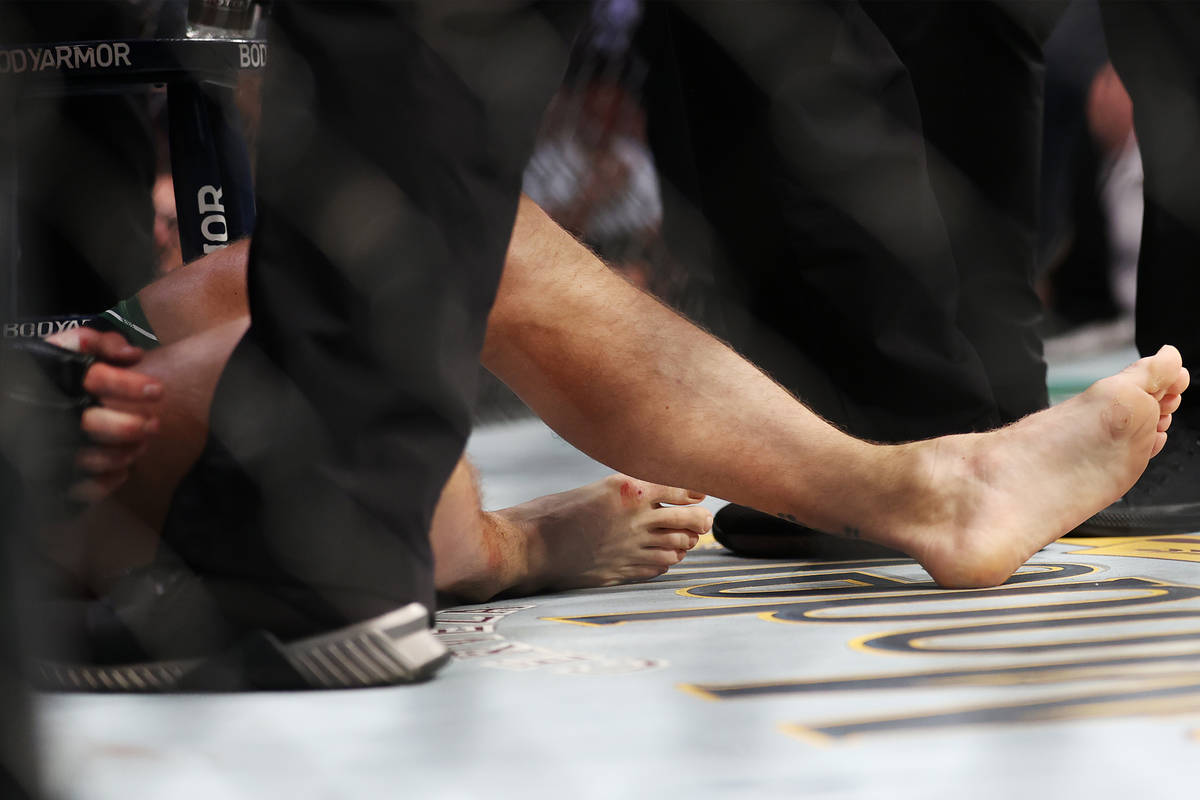 Conor McGregor receives assistance after hurting his foot in the first round of a lightweight bout against Dustin Poirier during the UFC 264 event at T-Mobile Arena in Las Vegas, Saturday, July 10, 2021. Poirier won by way of technical knockout in the first round. (Erik Verduzco / Las Vegas Review-Journal) @Erik_Verduzco

If Conor McGregor truly stepped into the cage at UFC 264 with pre-existing stress fractures in his left leg, the Nevada Athletic Commission wasn’t aware of it.

“If we ever knowingly had information a fighter wasn’t fit to fight, we wouldn’t let them compete,” NAC executive director Bob Bennett told the Review-Journal on Friday. “It would go to a doctor and a doctor would make that decision as the expert.”

McGregor lost his main event bout against Dustin Poirier on Saturday at T-Mobile Arena by doctor stoppage after a gruesome break of his tibia in the waning seconds of the first round.

He underwent surgery Sunday in Los Angeles and was released from the hospital Wednesday, the day he turned 33 years old. McGregor released an Instagram video Thursday in which he attempted to refute any claim that Poirier had caused the injury.

“I was injured going into the fight,” McGregor said. “People are asking me, ‘When was the leg broke? At what point did the leg break?’ Ask Dana White. Ask the UFC. Ask Dr. [Jeff] Davidson, the head doctor of the UFC. They knew I had stress fractures in my leg going into that cage. It was debated about pulling the thing out.”

White declined comment through a UFC spokesperson on Friday. Davidson was unavailable.

Bennett couldn’t comment on any specific fighter, but did say normal procedures were followed for all 24 fighters who competed on the card.

That would include McGregor, like all the fighters, filling out a pre-fight medical questionnaire about any existing injuries or medical issues and an examination by a commission-approved doctor.

McGregor doubled down on his claims, posting a series of photos purporting to be from this training camp that showed his left leg and ankle in various stages of treatment from a taped ankle to a full wrap of the lower left leg.

He also teased a four-part Netflix documentary about his training camp that would presumably detail whatever injury he suffered during that time, though it wasn’t clear whether or not he was joking.

McGregor said during his social media video that he has needed to get his left leg fixed and the clean break gave him a reason to stop putting off treatment on the appendage.

His video was filmed while he rode in an electric cart on the sidewalk. McGregor said he would need six weeks on crutches before he can begin rehab.

The loss dropped him to 1-2 in three fights with Poirier, a rivalry McGregor said has not run its course.