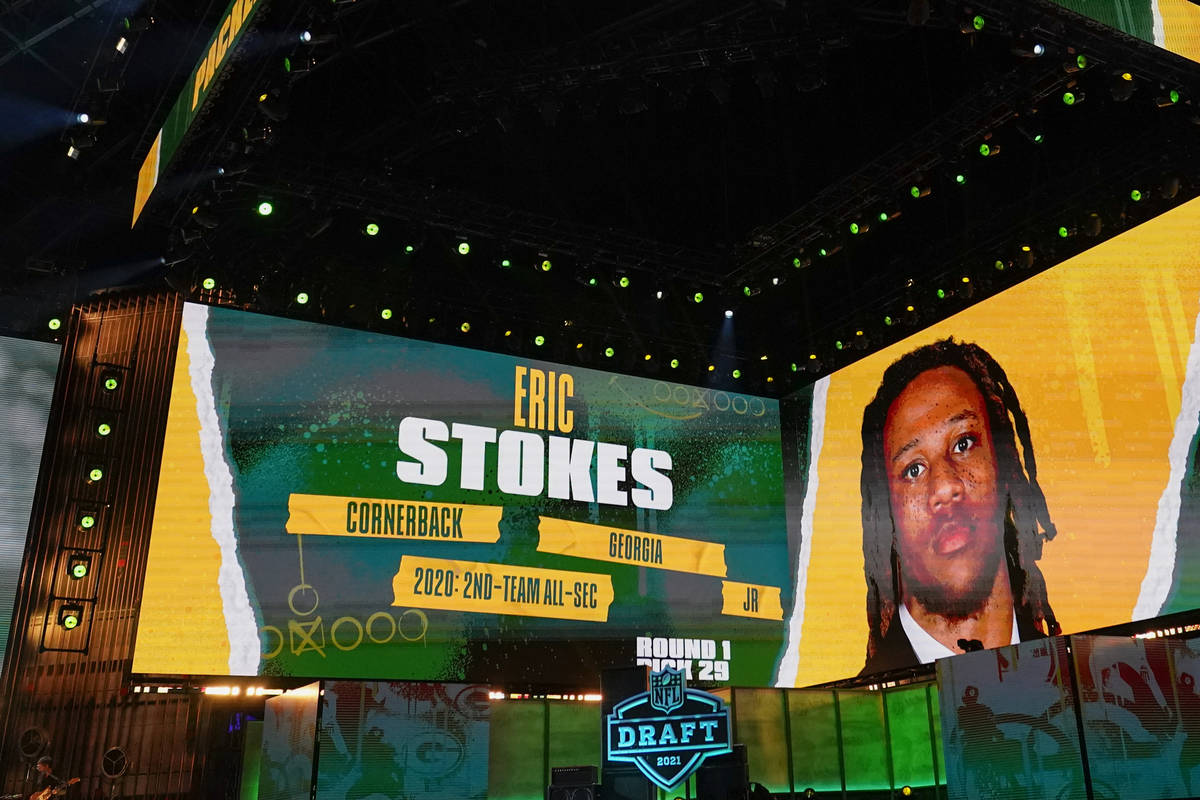 Images of Georgia cornerback Eric Stokes are displayed on stage after he was chosen with by the Green Bay Packers with the 29th pick in the NFL football draft Thursday April 29, 2021, in Cleveland. (AP Photo/Tony Dejak)

NFL draft weekend started as poorly as possible for the Packers on Thursday when rumors leaked about superstar quarterback Aaron Rodgers wanting out of Green Bay.

It didn’t get much better once the team started making its picks.

The Packers won a race to the bottom to top our list of this weekend’s losers, though it would be completely fair to wonder if the organization just found itself in a holding pattern over the uncertainty about whether to put pieces around Rodgers or build for the future.

It seems as if they’re still trying to figure that out.

Cornerback Eric Stokes is fast, but he was a massive reach at the end of the first round. The Packers followed that up with a fairly pedestrian center in Josh Myers, even though more highly rated center Creed Humphrey was on the board.

Humphrey went to Kansas City with the next pick.

After all the jokes about Green Bay never drafting weapons for Rodgers, the Packers finally selected a receiver in Clemson’s Amari Rodgers. He is hardly a finished product after being asked to run a limited selection of routes in college.

Green Bay then went with a tackle in Royce Newman, who never really showed an ability to pass protect during his time at Arkansas. Not that blocking for Rodgers is important or anything.

It was that kind of weekend for Green Bay, a team that likely won’t be able to do much of anything until it figures out what to do about the reigning league MVP.

Here are some other teams that may not have had ideal weekends in Cleveland:

All Nick Caserio could do was play the cards he was dealt and folding wasn’t an option in this case. He took the job believing he had one of the best quarterbacks in the league and little elsem with no picks in the first or second round to jumpstart the rebuilding process. Then he had to use the third-round pick on a developmental quarterback in case Watson either can’t play because of legal issues or demands a trade.

They got some pass-catching weapons in Nico Collins and Brevin Jordan, which is nice. But neither play defense. It’s rock-bottom time in Houston.

The Steelerstook a running back in the first round. Enough said. Najee Harris is very good and he’s an easy player to root for with his incredible story. But the way to fix their running game is by drafting offensive linemen.

This isn’t 1985. Running back values have decreased exponentially for a reason. They did get a solid guard in Kendrick Green in the third round, but maybe that’s when they could have addressed running back. Harris could be the reincarnation of Jim Brown and still struggle behind this group.

The Seahawks didn’t pick until the second round and when they were finally on the clock, they made a big reach to get Western Michigan wide receiver D’wayne Eskridge. Seattle only had two more picks and to be fair, it actually found pretty good value in cornerback Tre Brown and tackle Stone Forsythe.

Payton Turner was a reach in the first round, though he has great size and flashed at times last season as a pass rusher. Second-round linebacker Peter Werner is just OK. Cornerback Paulson Adebo fills a need but doesn’t really fit the scheme in New Orleans.

It was a bit of a surprise Ian Book was even selected. The Saints took the former Notre Dame quarterback in the fourth round.

This is probably more the fault of Denver and Carolina for grabbing the two elite corners at No. 8 and No. 9 ahead of the Cowboys. Dallas likely would have taken either Jaycee Horn or Patrick Surtain II at No. 10. Instead, they were left with neither and took a good player in Micah Parsons, but one who doesn’t do much for the gaping hole in the secondary.

Give Dallas credit for recovering and putting together a decent draft, including two cornerback prospects and standout Day Three linebacker Jabril Cox. But it would have been unfathomable leading into the draft to think the Cowboys would come away without either of the top two corners.