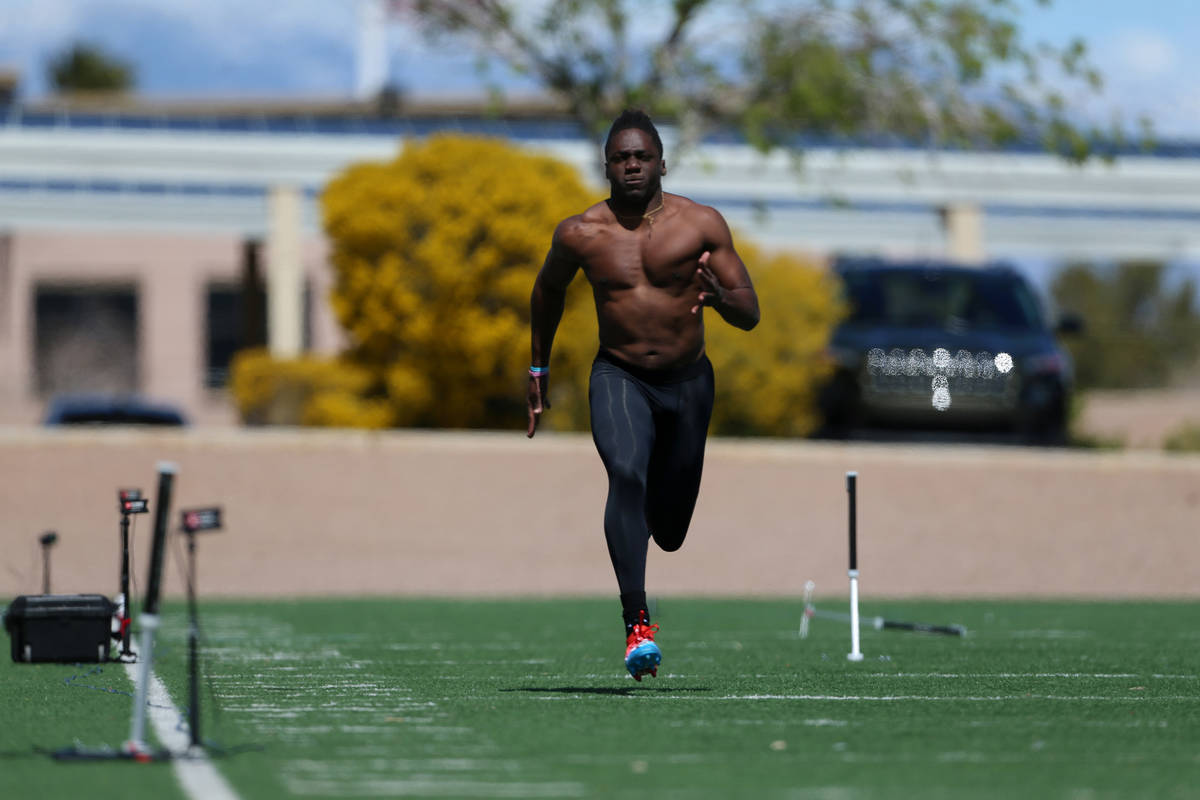 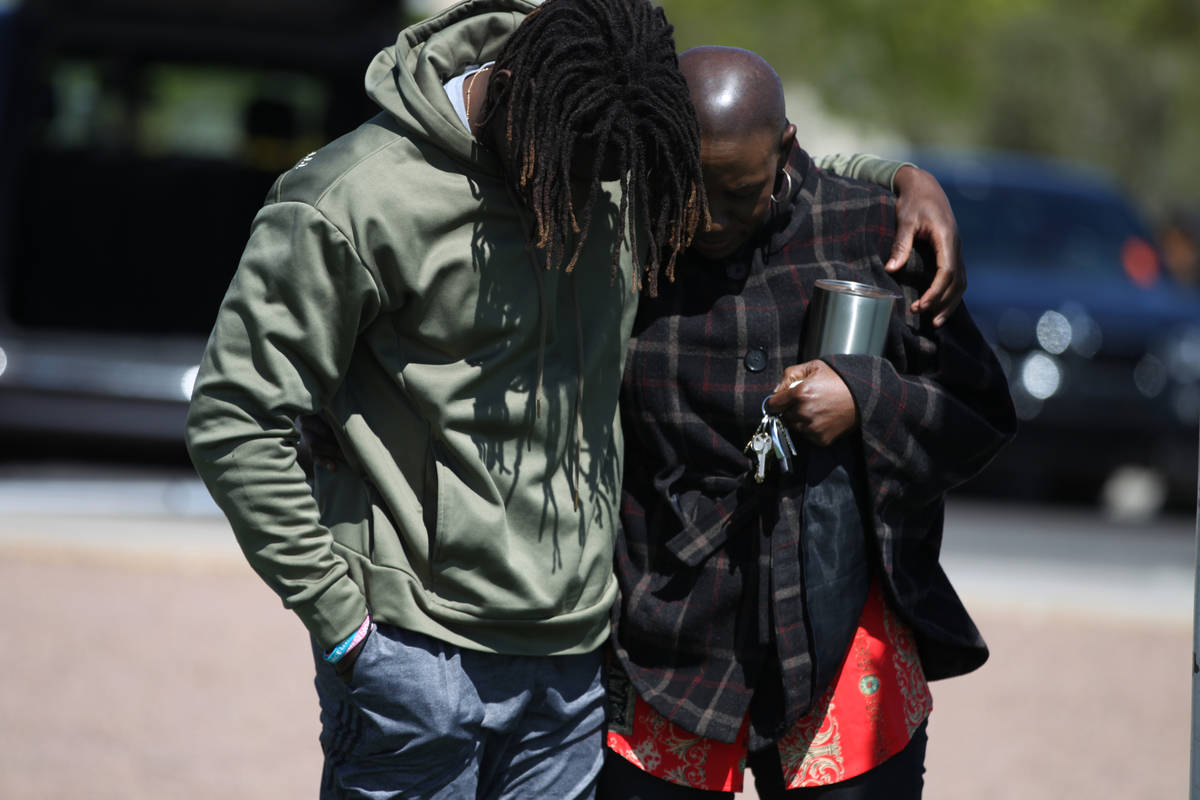 University of Hawai'i football graduate Ikem Okeke, left, with his mother Dr. Chinyere Okeke, at the All American Park in Las Vegas, Friday, March 27, 2020. Okeke is hopeful he will one day play in the National Football League. (Erik Verduzco / Las Vegas Review-Journal) @Erik_Verduzco 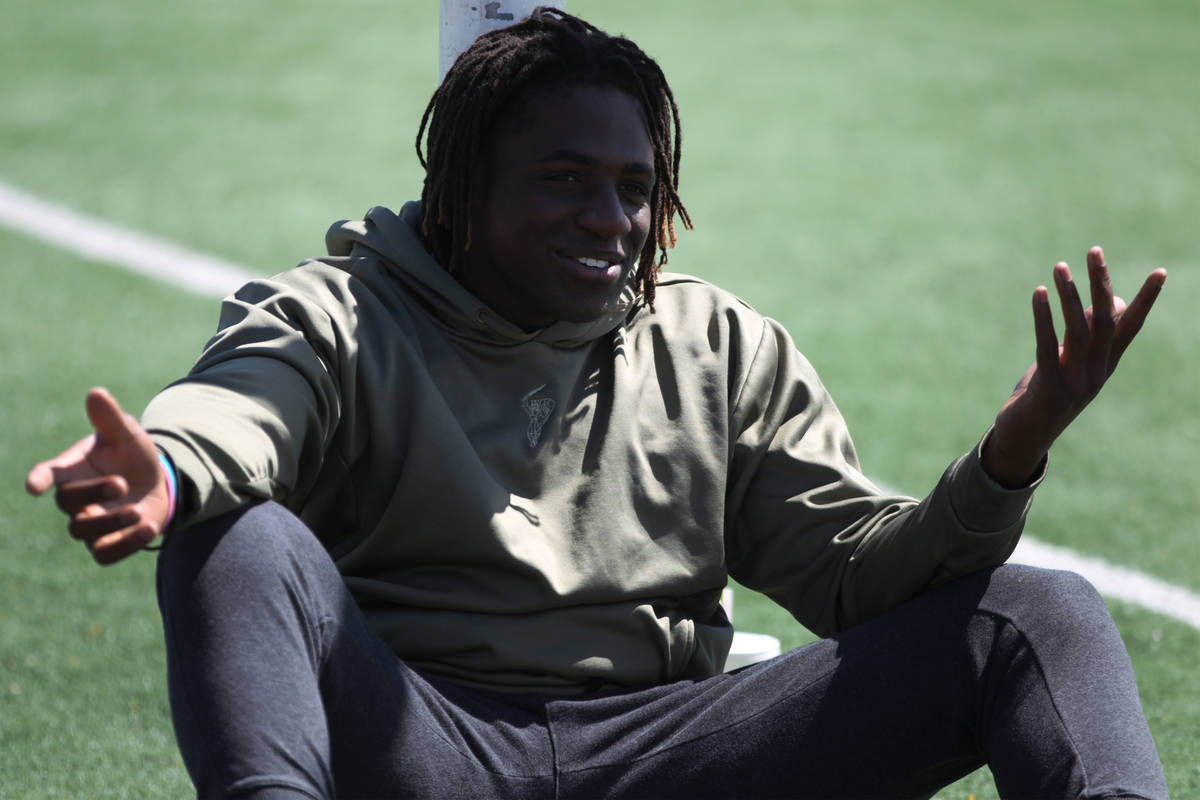 University of Hawai'i football graduate Ikem Okeke at the All American Park in Las Vegas, Friday, March 27, 2020. Okeke is hopeful he will one day play in the National Football League. (Erik Verduzco / Las Vegas Review-Journal) @Erik_Verduzco 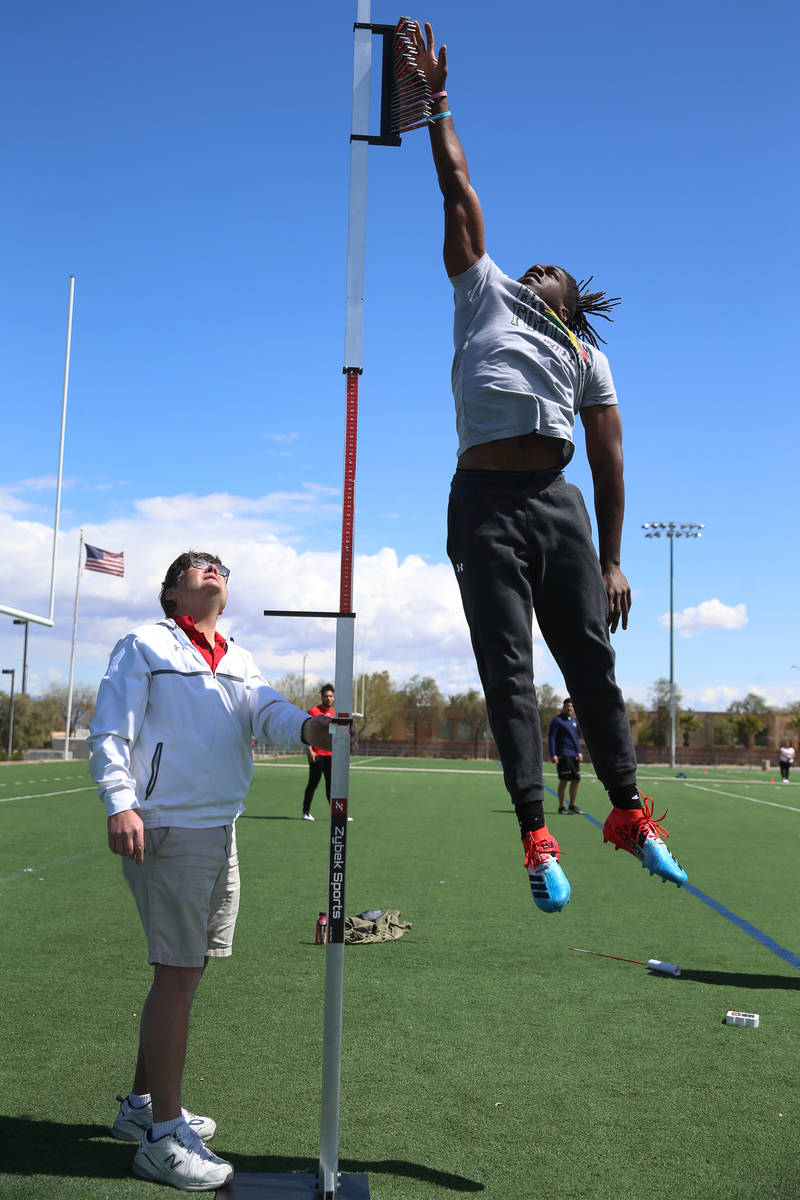 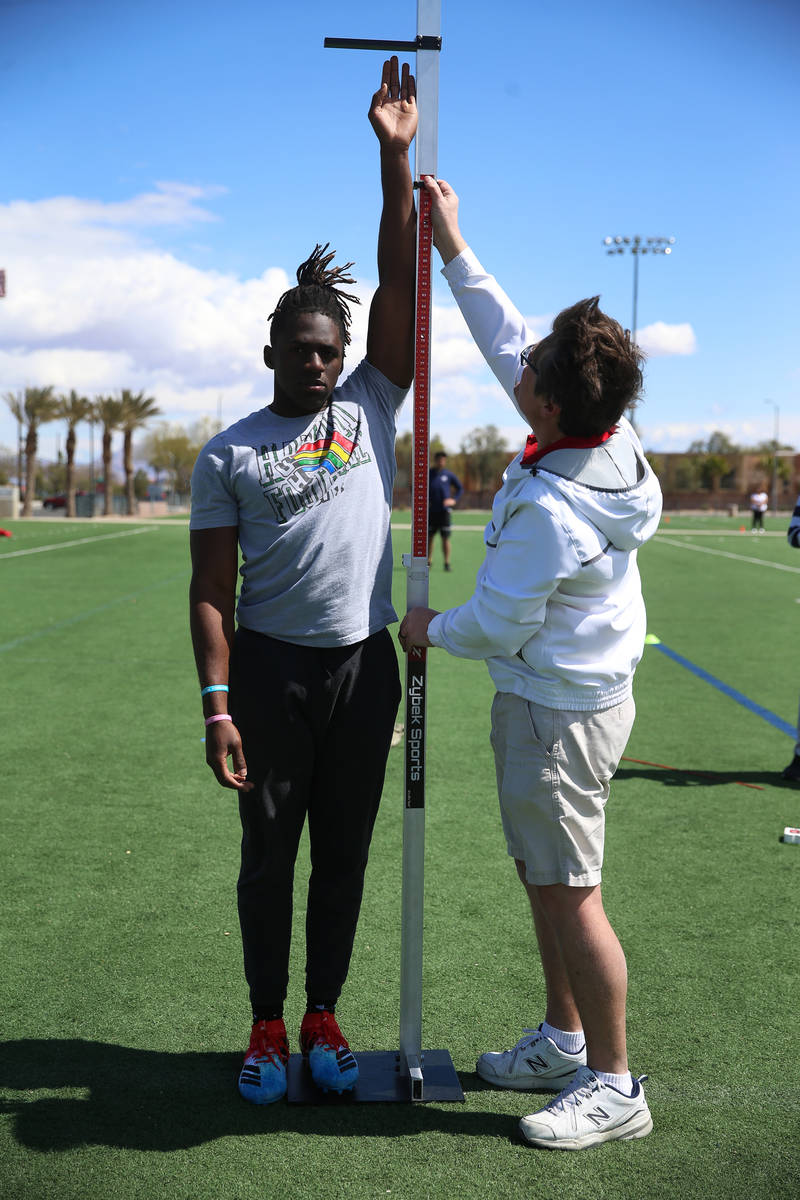 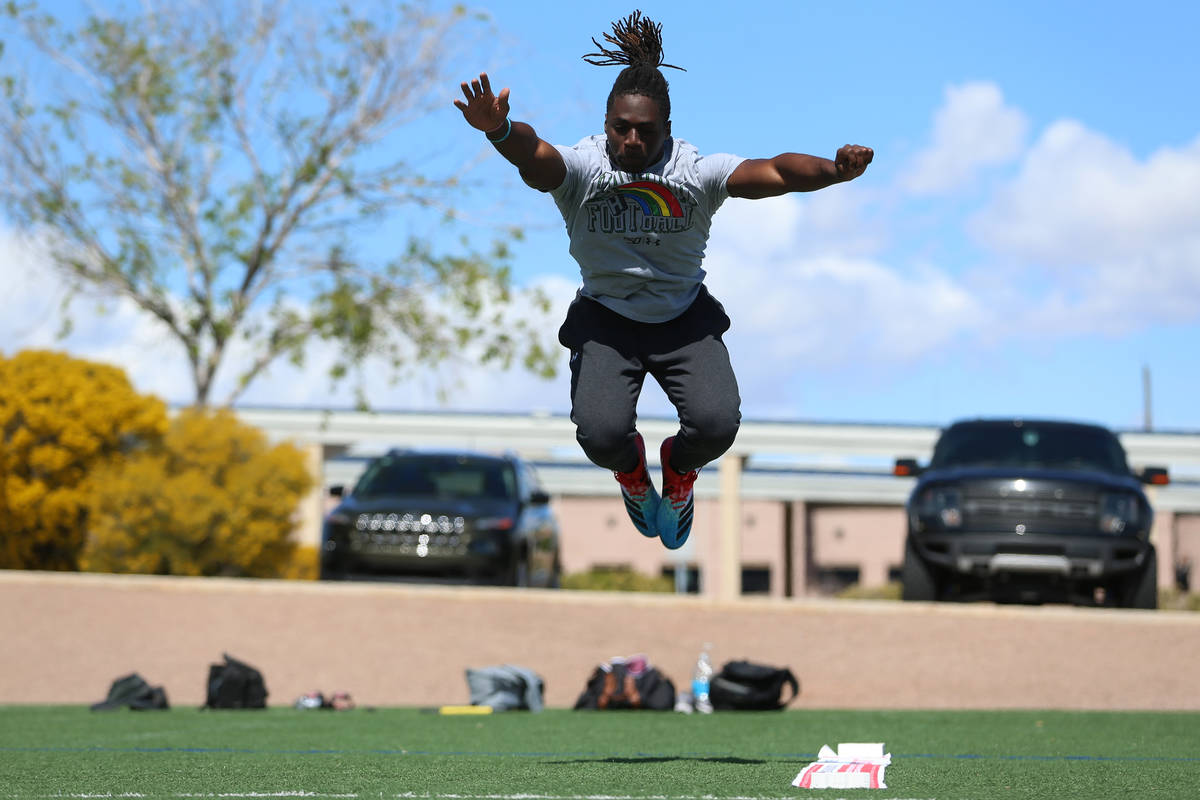 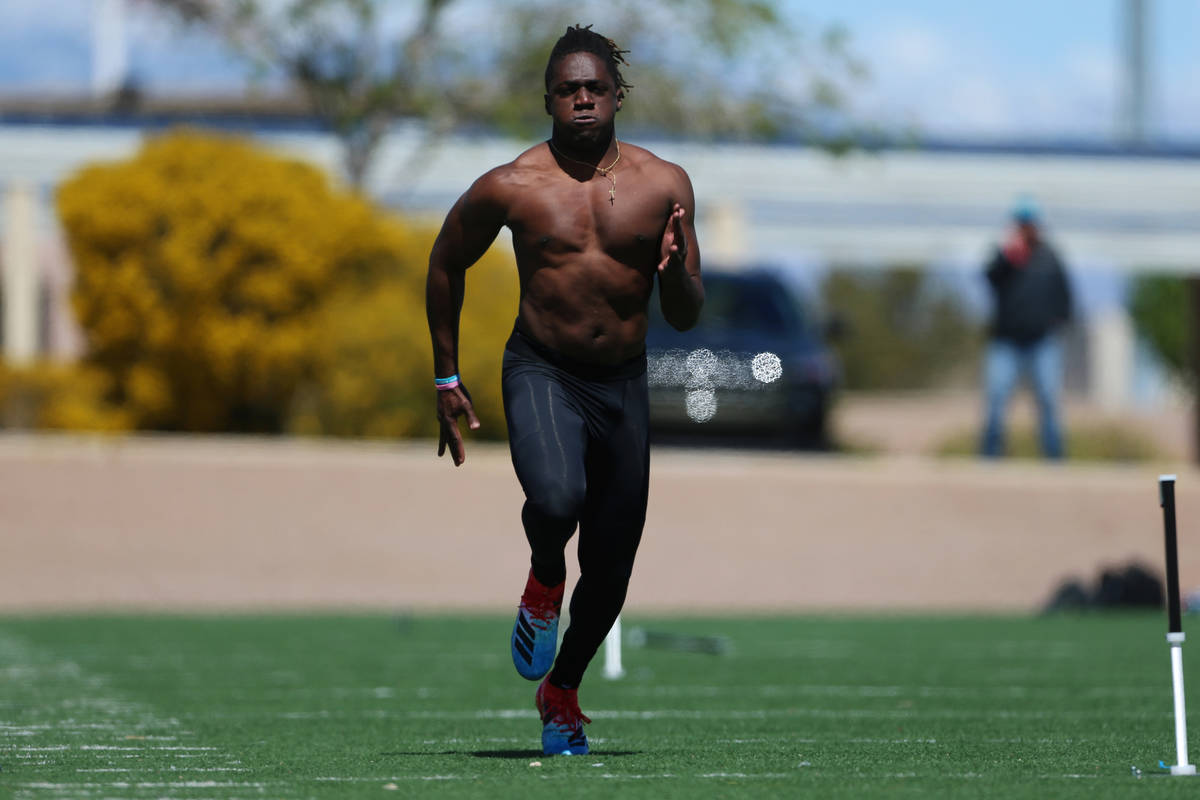 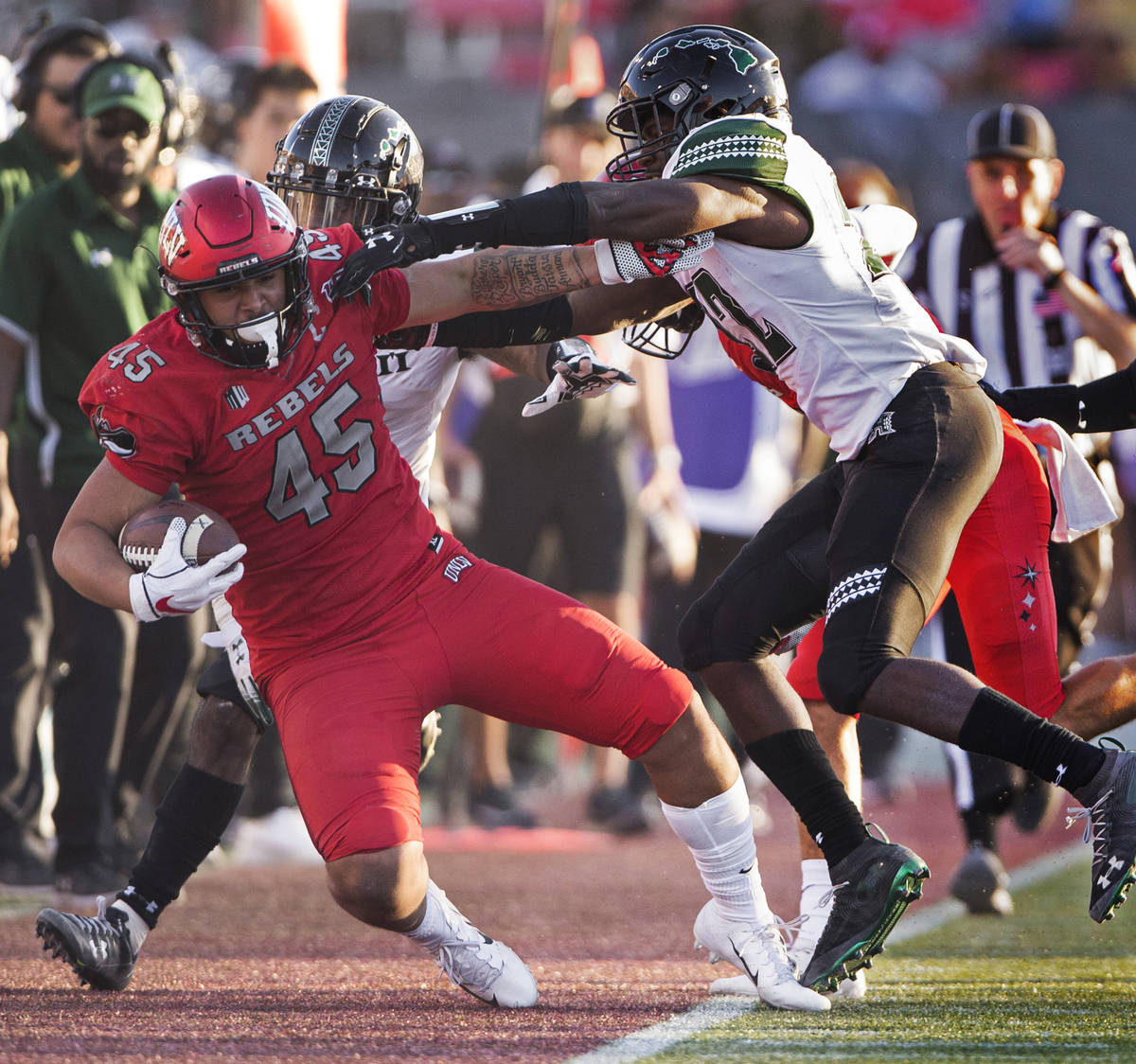 It is one consequence of a devastating pandemic, the reality that a person’s most ambitious pursuit can be immediately paused.

Ikem Okeke has a dream.

How fast someone can run. How high and far he can jump. How many bench press reps he can complete. How quickly he changes direction. How agile he is. How fluid his movements are.

But for prospects such as Okeke, a safety from the University of Hawaii who prepped at Bishop Gorman High, exhibiting such skills to pro scouts in advance of April’s draft has become almost impossible in this frightening time of social distance.

His is a similar situation to countless players across the country, those not invited to last month’s scouting combine in Indianapolis and who need such opportunity elsewhere to open the eyes of 32 teams.

Usually, such a chance comes at a pro day on college campuses.

All of which have been canceled.

“It’s important for me to give the NFL something,” Okeke said. “I’m just trying to make the best out of a bad situation.”

For this, his family enlisted an expert in testing one’s potential NFL skill.

Mike Weinstein is CEO and founder of Zybek Sports, in its 10th year providing electronic timing at the scouting combine.

His company tested more than 20,000 athletes nationally in 2019, with some as young as … wait for it … kindergarten.

“We tell parents all the time not to think their child is going to be losing draft spots in the second grade,” Weinstein said.

On Friday afternoon at All American Park in Las Vegas, Weinstein carefully set up different skill assessments on one football field.

There were ones for the 40-yard dash and shuttle run and cone drill and broad jump and vertical jump.

“I feel sorry for those athletes who have built their whole lives to make it to the NFL ranks and, all of a sudden, pro days are canceled,” said the Colorado-based Weinstein. “This will allow (Okeke) to know exactly where he stacks up athletically as if he was at the scouting combine or a pro day.

“We show them the scores and where they rank and make suggestions for what they should be working on if they want to improve the numbers. Then we give all (the data) and a film reel to the player and their agent, all they would need to provide NFL scouts. It’s all up to the athlete. No matter who you are or where you live, these are the numbers.”

In the case of Okeke, she who loves him most supplied such opportunity.

Chinyere Okeke and her husband, Matthew, are physicians, well aware of the pain and suffering felt by so many as the coronavirus spread across the globe.

His younger brother is here, on a windy field off Buffalo Drive, chasing his dream.

“Basically, (Ikem) has worked his whole life for this, and I figured that I could afford it and needed to make this happen for him,” Chinyere said. “But as much as he loves the sport, this time (of the coronavirus) has given me an opportunity to explain to him that there are a lot of things more to life than football.

“I’d love for him to get an opportunity to do what he loves, but I want him to focus on broadening his horizons and helping people.”

Ikem Okeke played four years at Hawaii, competing at both safety spots and linebacker. He finished with career numbers of 157 tackles (103 solo), three interceptions and one sack.

He was part of a conference division champion and Hawaii Bowl winner over Brigham Young as a senior.

It’s often a tougher road to travel, making the NFL, for players from non-Power Five conferences such as the Mountain West.

Okeke planned to be tested at Hawaii’s pro day and, once it was canceled, another at UCLA. Also called off.

Consider: Many of these workouts are attended by scouts from every NFL team.

The answer for prospects such as Okeke, then, has been to get creative. They find local fields and parks and, if necessary, hire those such as Weinstein to conduct testing.

“I know I can’t control the virus,” Okeke said. “The only thing I can control is my actions right now in trying to showcase my talents.”

The mighty gusts never ceased Friday and yet Okeke was able to complete all tests. Given the conditions, Weinstein said the player could retake a few this week when the forecast calls for warmer, calmer weather.

The coronavirus has changed the world but not lessened the desires of many, and those of Okeke are as strong as ever in regard to making the NFL.

His mother, incredibly supportive of such a path, offered a message about a more significant one right now.

“Are we going to solve the world’s problems in a day?” asked Chinyere Okeke. “Probably not. But as human beings, we can try. We need to be careful not to (forget) about a serious, deadly virus. It has made us all think in terms of things we have taken for granted in our lives and how easily things can be taken away.”

Off to one side, her son crouched in a three-point stance, the mechanical posture for exploding off a line and building speed over 40 yards. He drove forward, head down, legs working in sync with arms, eyes focused down a straight line toward his dream.