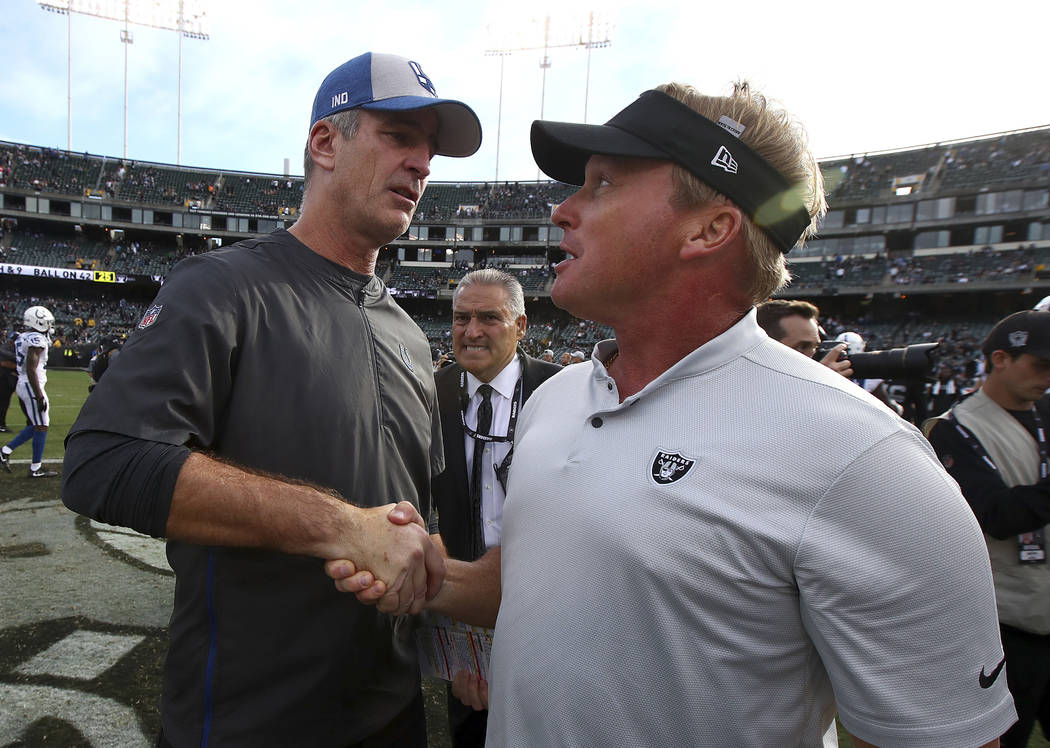 I’ve always encouraged Raiders fans to send me emails instead of tweets because sometimes 280 characters isn’t enough to vent.

Dan Kinney took me up on my offer and did not hold back. He fired off 1,649-word dissertation. It started like this: “First of all, I have been a Raiders fan since 1963. So I know a thing or two about the Raiders.”

You know this guy means business when he’s revealing his fandom credentials from the start. Fifty-years of rooting for the silver and black is a long time. He’s seen it all. My first thought was Dan is about to rip the Raiders organization to shreds, which is what most fans are doing nowadays after the 1-6 start with Khalil Mack and Amari Cooper now gone.

He was triggered all right, but it was the opposite of what I expected.

After 290 words of a history lesson on Jon Gruden’s first tenure with the Raiders and Gruden winning Super Bowl XXXVII with the Buccaneers, Dan finally got to the point.

“The Gruden bashing comments saying he had been out of coaching too long and the game had past him by, to that I say, HOGWASH. Gruden has a plan and he is executing it. Yes, he got a ton of money and a ton of power, but he has a great football mind and a great vision.”

This was a full on attack with the Raiders’ most loyal fan shutting down the Gruden haters.

“In Gruden we must trust. He has a plan and plans take time to execute. Raider Nation for now and forever!!! Thanks for letting me vent.”

“Will Carr ever make it as the Raiders’ franchise QB given his fear of hanging in there to make the play? … Is the problem Carr or the awful O-line? … I think Gruden needs a fearless mobile QB to make his offense work. ” — Kenneth Harris (email)

I received this email before Carr’s four-touchdown performance against the Indianapolis Colts last week. Carr looked like a franchise quarterback for at least one game and had plenty of protection from the offensive line.

But Kenneth brings up a good point. Lately, Carr hasn’t extended plays with his legs, opting for dump offs for short gains. What made Carr a prized quarterback between his rookie year and 2016 was his mobility and creating on the fly. He had numerous comebacks in the playoff year of 2016, and that’s what Raiders fans have missed.

“When are you gonna complete the fire sale and trade Carr?” — Scott Harding (Facebook)

The trade deadline came and went and Carr is still on theroster. It was actually a dull fire sale. Karl Joseph, Gareon Conley and Bruce Irvin are still on the team. But I guess trading away two former cornerstone players in Mack and Cooper was enough.

“How do you plan on filling up this beautiful new stadium unless you have the desire to come out and WIN!!! The Vegas Golden Knights have spoiled this city.” — Diane M. George (Facebook)

Can we stop with the Raiders aren’t “Vegas Born” narrative? I’m sure many locals will jump on the Raiders’ bandwagon when it arrives. A lot can happen in two years.

It’s OK to root for both the Golden Knights and Raiders.

“The only thing scary this Halloween is the Raiders’ record.” — Brandy Galvz (Facebook)

Want to know what’s scarier? Watching the 1-7 49ers take on the 1-6 Raiders on “Thursday Night Football.”

The No. 1 pick probably will be on the line.