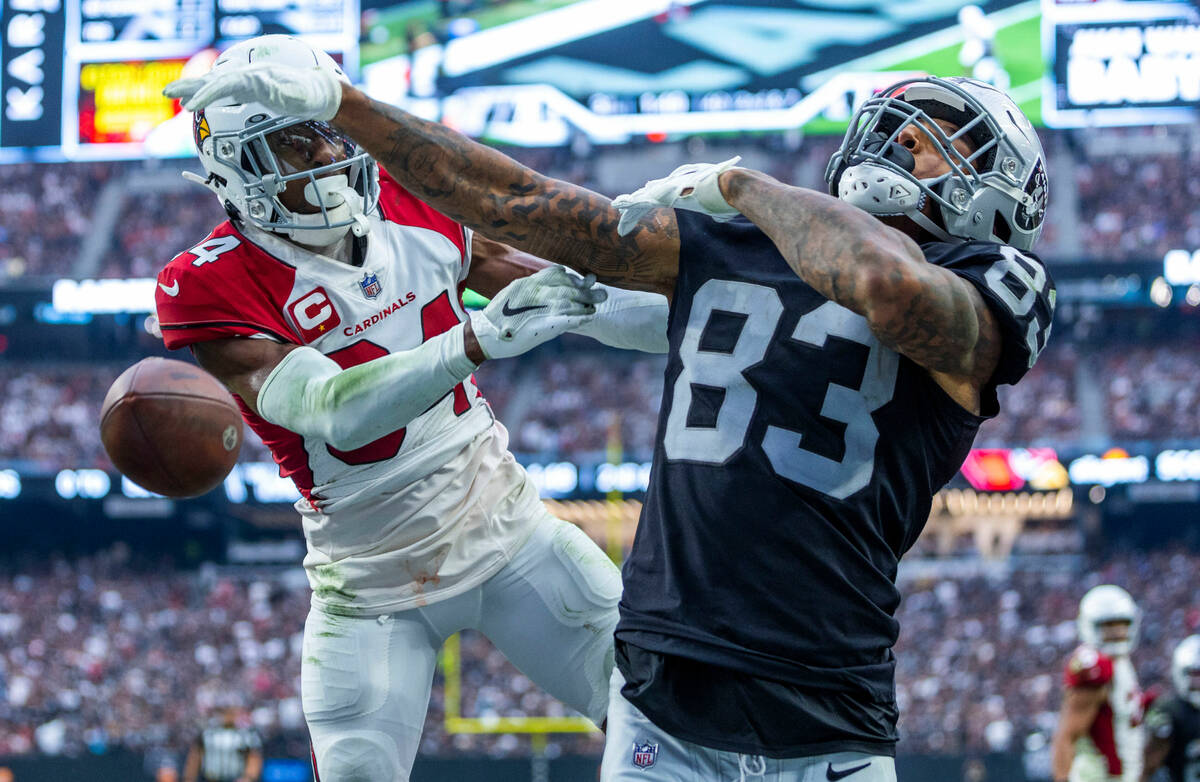 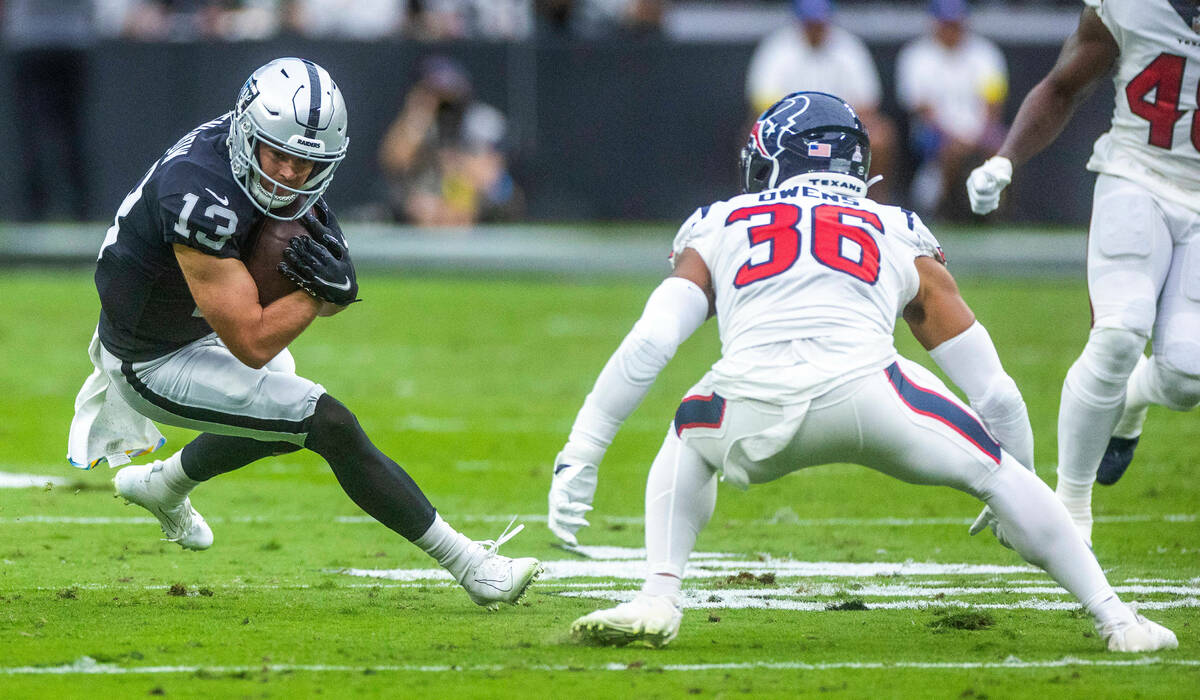 Raiders wide receiver Hunter Renfrow (13) looks to cut up field after a catch with Houston Texans safety Jonathan Owens (36) moves in during the first half of their NFL game at Allegiant Stadium on Sunday, Oct. 23, 2022, in Las Vegas. (L.E. Baskow/Las Vegas Review-Journal) @Left_Eye_Images 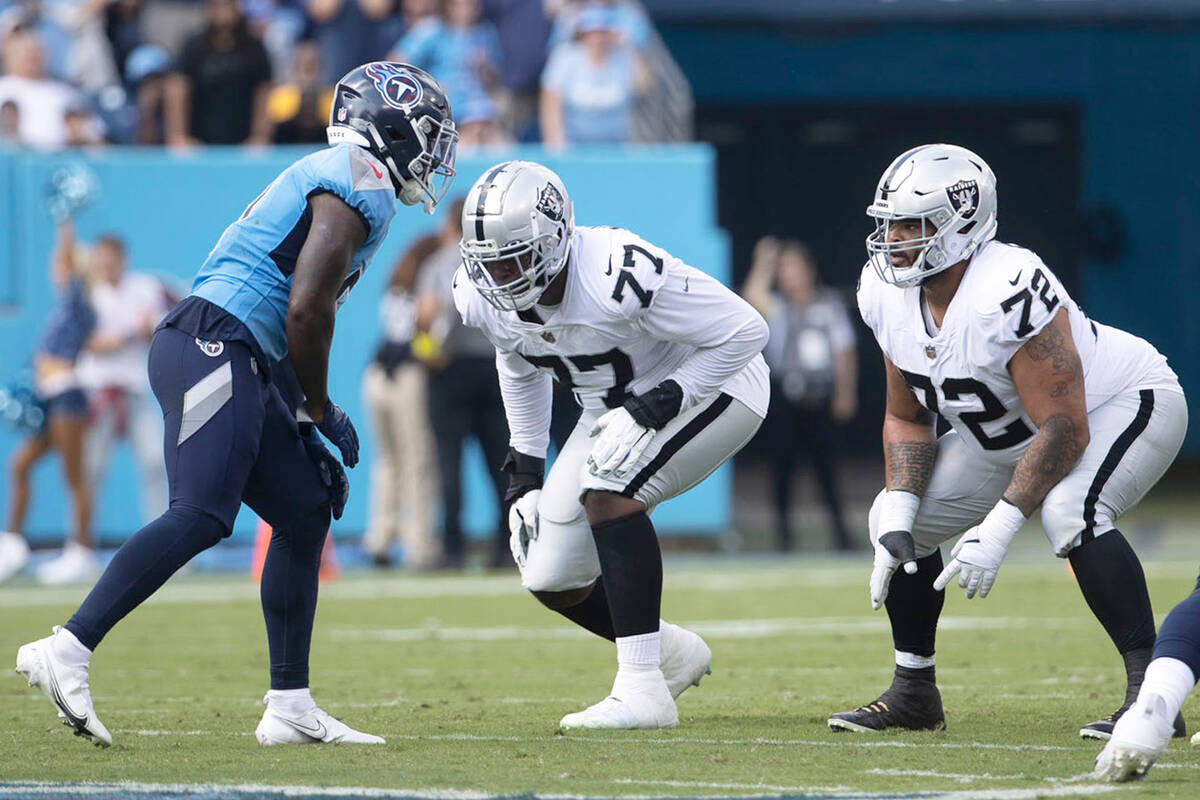 Raiders offensive tackle Thayer Munford Jr. (77) and Raiders offensive lineman Jermaine Eluemunor (72) on the line of scrimmage during the first half of an NFL game against the Tennessee Titans at Nissan Stadium on Sunday, Sept. 25, 2022, in Nashville, Tenn. (Heidi Fang/Las Vegas Review-Journal) @HeidiFang 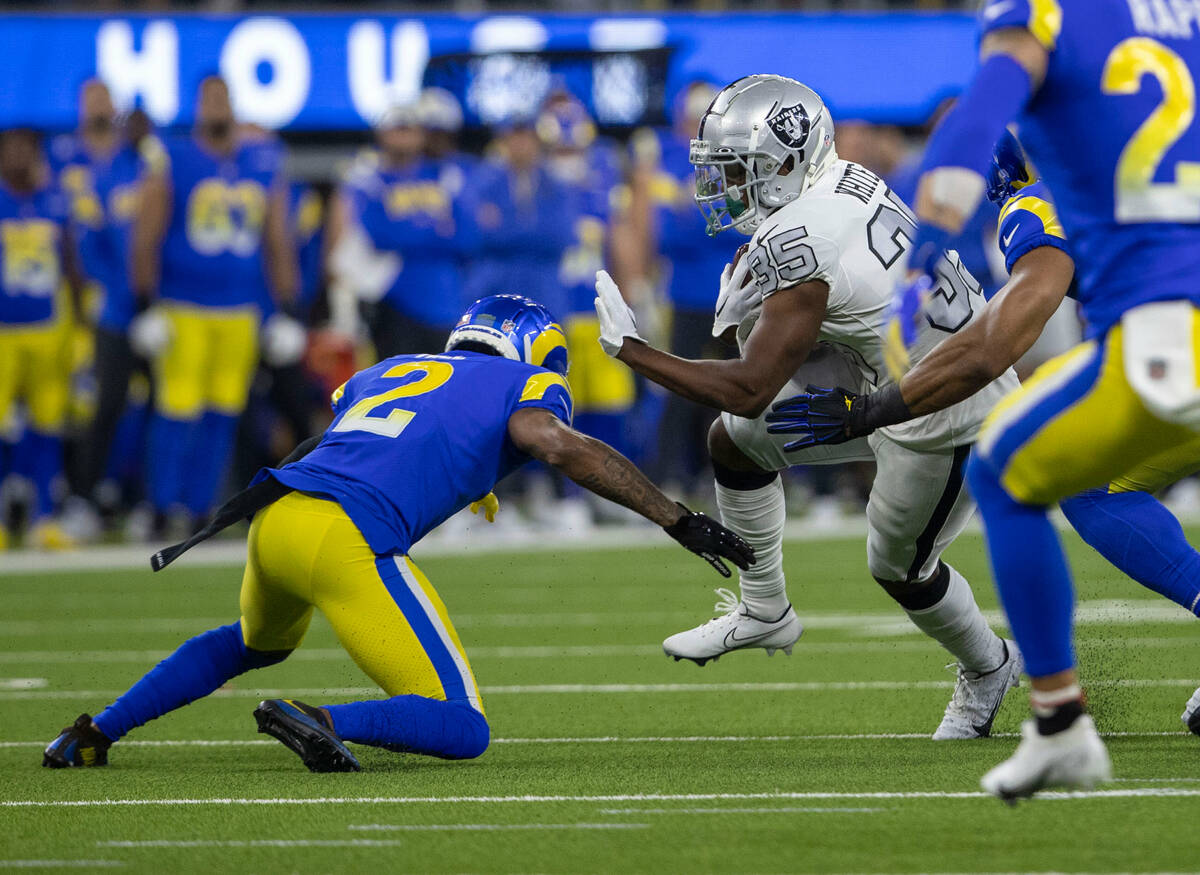 Raiders running back Zamir White (35) looks for room to run during the first half of an NFL game against the Los Angeles Rams at SoFi Stadium on Thursday, Dec. 8, 2022, in Inglewood, Calif. (Heidi Fang/Las Vegas Review-Journal) @HeidiFang

Much more than a game slipped through the Raiders’ hands Thursday night when they blew a 13-point, fourth-quarter lead and lost to the Rams.

Whatever hopes the Raiders had of playing meaningful games in the final four weeks of the season and pushing their way into the NFL playoffs also were squandered.

It leaves the Raiders to pick up the pieces of their now-shattered season. And as they look ahead to their final four games, now sitting on a 5-8 record that plants them on the outer fringes of contention, they begin the process of shifting their focus from the short term to the long term.

To be sure, they want to win as many games as possible in Year 1 of the Josh McDaniels era. But their focus must now expand beyond just the immediate. That’s because figuring out a way to avoid a similar fate next season is their biggest priority.

Here are some ways the Raiders can make their final four games as meaningful and useful as possible.

Get Waller and Renfrow into the mix

The Raiders’ offense, which looked to be prolific when training camp began, never got a chance to take off because of the nagging injuries suffered by two key players.

Two hamstring injuries on either leg sabotaged Waller’s season. He suffered the first early in training camp and missed a critical phase of the Raiders’ installation of McDaniels’ offense. It also set back the process of implementing the Raiders’ three-headed receiver core of Waller, Renfrow and Davante Adams.

Only Waller knows how healthy he was when he returned to action to start the season, though he never looked right in the four games he has played.

Then, in early October, he suffered a hamstring injury to the opposite leg that has sidelined him for the past eight games.

Similarly, Renfrow’s season never took off upon suffering a concussion in Week 2 against the Cardinals and then an oblique injury in early November that has sidelined him the past five games.

Renfrow and Waller have missed a combined 13 games, and that has robbed the Raiders of playing at full throttle.

Both players are eligible to return from injured reserve, and while there is an argument to be made that it’s pointless to bring them back now, there is a larger issue in play that the Raiders must consider.

To get a leg up on next season — from an evaluation and a development perspective — it behooves the Raiders to get their two weapons back on the field and expedite the process of creating cohesion and chemistry so this group can hit the ground running next spring.

The Raiders are hopeful Waller and Renfrow make a seamless transition back into the fold, allowing them to focus on other areas next offseason. But equally important is clarifying whether this will work and whether the Raiders should consider breaking it up, even to help accentuate other parts of the team.

Give Thayer Munford a bigger role

The Raiders’ offensive line is certainly an area McDaniels and general manager Dave Ziegler will look to improve. This group deserves credit for showing improvement over the course of the season, and Jermaine Eluemunor has demonstrated he can be a dependable player on a 53-man roster.

But the Raiders would be short-changing themselves if they went into next season with Elumenor as the starting right tackle and Alex Bars at right guard.

Munford was a seventh-round draft pick out of Ohio State coming off a season in which he moved to guard to better round out the Buckeyes’ offensive line. Had he remained at tackle, there is a good chance he would have been drafted higher, so the Raiders benefited from the move even if it cost Munford personally.

The Raiders have a good handle on what they have in Eluemunor. Ideally, he is a swing tackle capable of providing solid play in relief at left and right tackle. But what about Munford, who could top out just like Eluemunor as a swing tackle but also could have a higher ceiling?

It’s time for the Raiders to get a better idea of what that ceiling is, and the only way that happens is by giving him a chance to start at right tackle and letting his play determine whether he is a viable starting candidate.

The Raiders opted against picking up the fifth-year option of running back Josh Jacobs. In doing so, it left open a door for Jacobs to leave Las Vegas as a free agent after the season, though the Raiders have maintained their decision didn’t shut off any paths to bringing Jacobs back on a new deal.

And certainly Jacobs’ incredible performance this season proves how important he is to the Raiders. Although in doing so, he pushed himself into a higher financial bracket, so locking him up will be a bit tricky at this point.

Chances are it gets done. But the Raiders also have to be prepared for life without Jacobs if the price tag moves into an area they aren’t comfortable with.

The Raiders drafted White out of Georgia in the fourth round in April, and all indications pointed to him being the potential heir apparent to Jacobs. The problem is, Jacobs has played so well and been so durable that White’s playing time has been nearly nonexistent.

What started as a likely running back by committee has turned into the Jacobs show.

The Raiders will play to win their final four games, which means Jacobs will be featured prominently. But more room has to be made for White to get a handle on whether he can be a viable fall-back option should Jacobs leave.

Where to start on defense?

Aside from the offensive line, no group will be under more scrutiny, or in line for an infusion of talent, more than the defense.

Maxx Crosby is a mainstay as one of the NFL’s best edge rushers. Nate Hobbs is an emerging cornerback. But aside from those two, the Raiders face uncertainty.

Denzel Perryman and Duron Harmon have played admirably, but both face free agency. Chandler Jones has been a major disappointment relative to creating pressure off the edge. Rock Ya-Sin has been solid at cornerback, but he is in the last year of his rookie contract. Safety Tre’von Moehrig has had a disappointing sophomore season, and while Jerry Tillery and Andrew Billings have provided help in the interior, they can leave as free agents.

Only Bilal Nichols is a veteran interior lineman under contract beyond this season.

All of that creates a long to-do list, and the Raiders face a big question of how much they can get figured out in the final four games to have a better idea of what needs to be done.

That could mean getting a bunch of young guys more playing time in the hope that they can prove they are part of the solution.

Interior rookie defensive linemen Neil Farrell and Matthew Butler have been mostly on a development track this season, and neither has stepped up to the point that the Raiders were compelled to play them more than just marginally, But now might be an opportunity to get on the field more.

The same is true for undrafted free agent linebackers Luke Masterson and Darien Butler, who showed promise during training camp and could have bright futures.

They would join fellow undrafted free agent rookies in cornerback Sam Webb and safety Isaiah Pola-Mao, who have played their way into bigger roles as the season progressed, as young players who can forge roles next season.