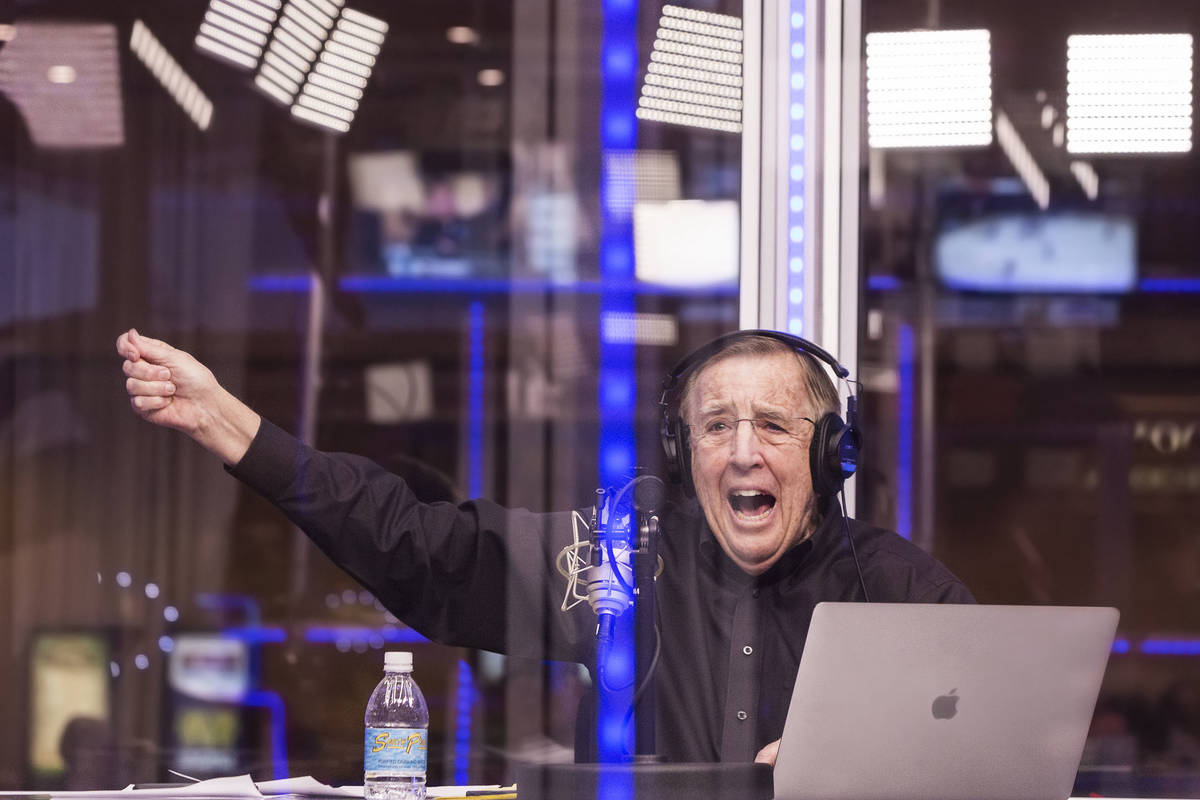 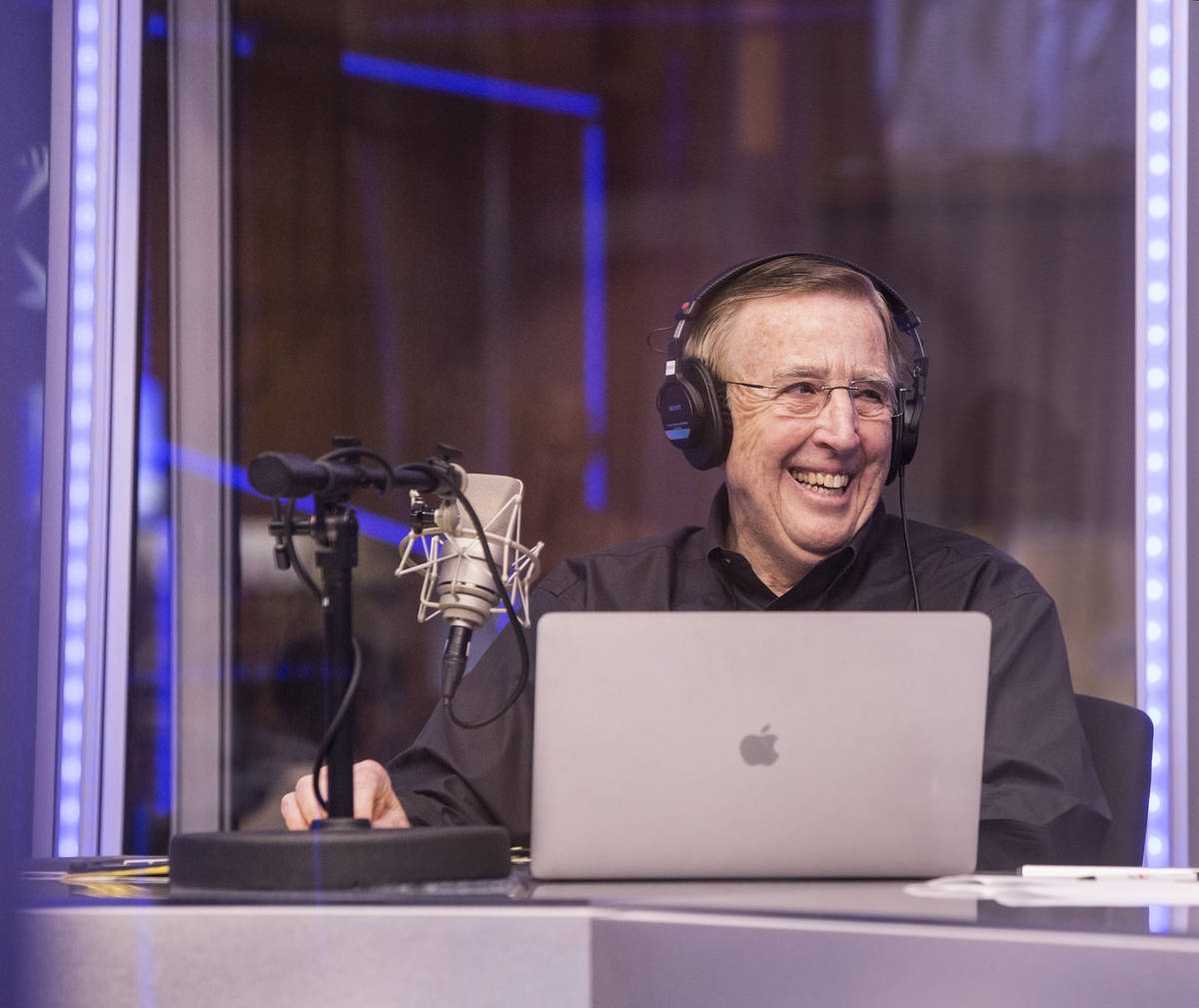 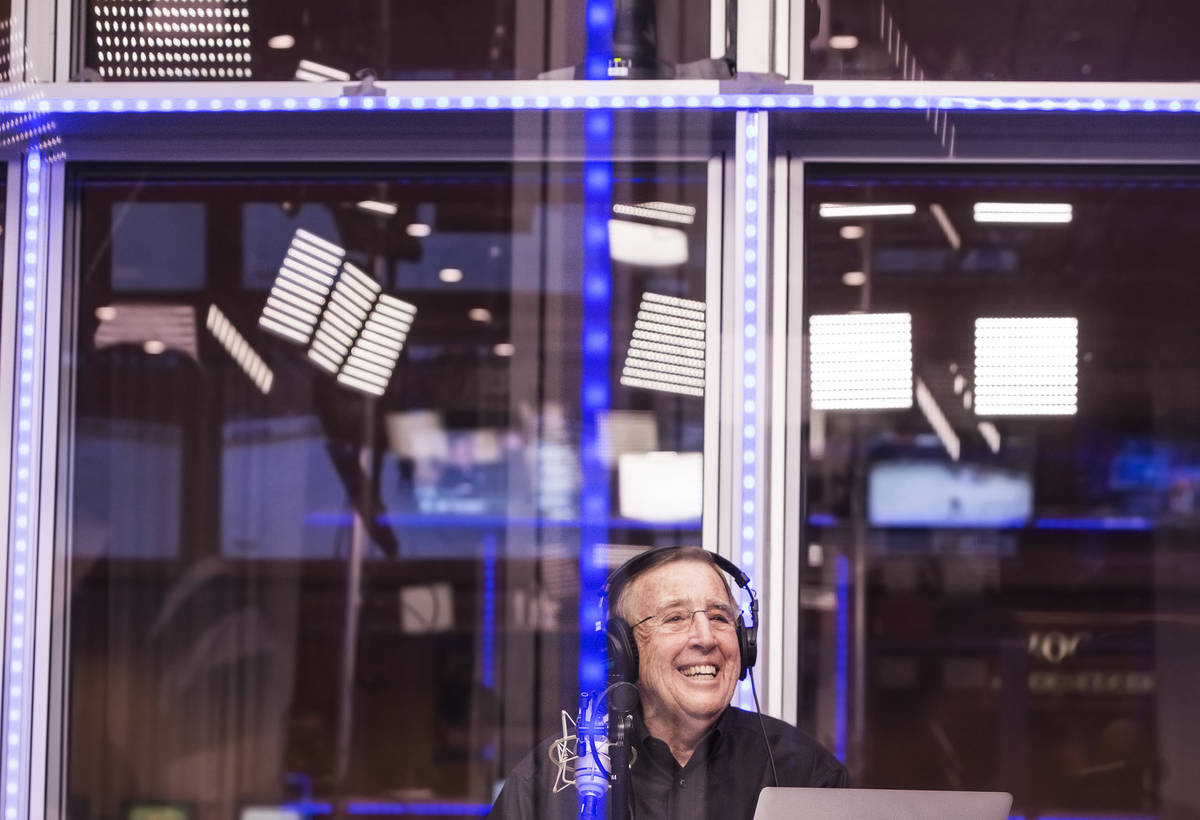 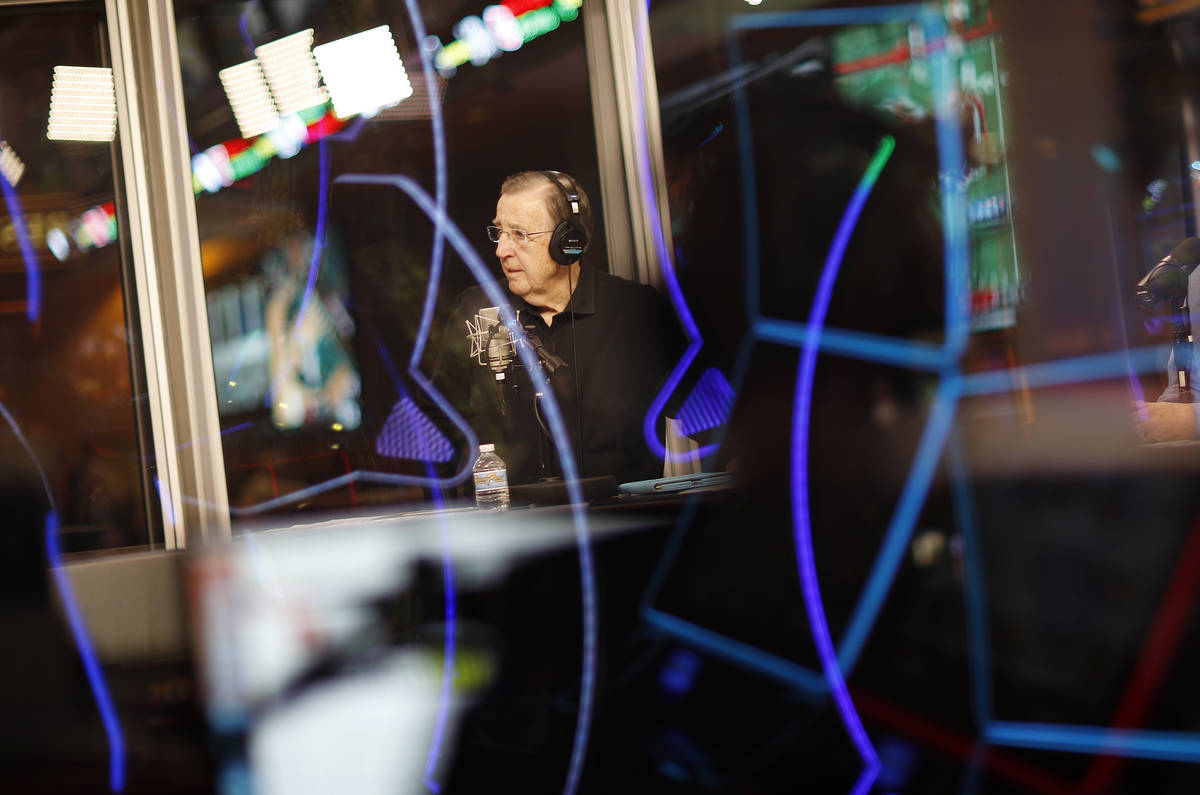 In this Nov. 16, 2017, photo, Brent Musburger broadcasts a show from a glass booth at the South Point hotel and casino in Las Vegas. During the show, part of the Vegas Stats & Information Network, Musburger and others talk about sports betting. (AP Photo/John Locher) 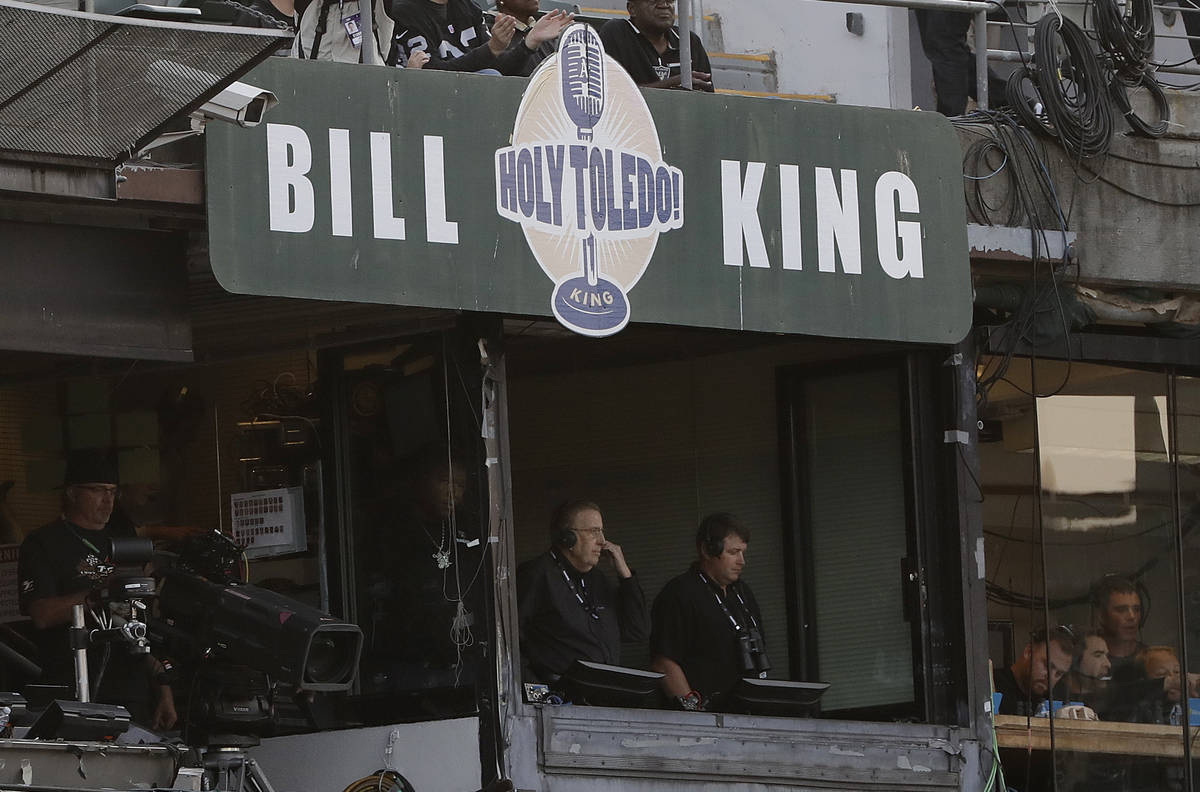 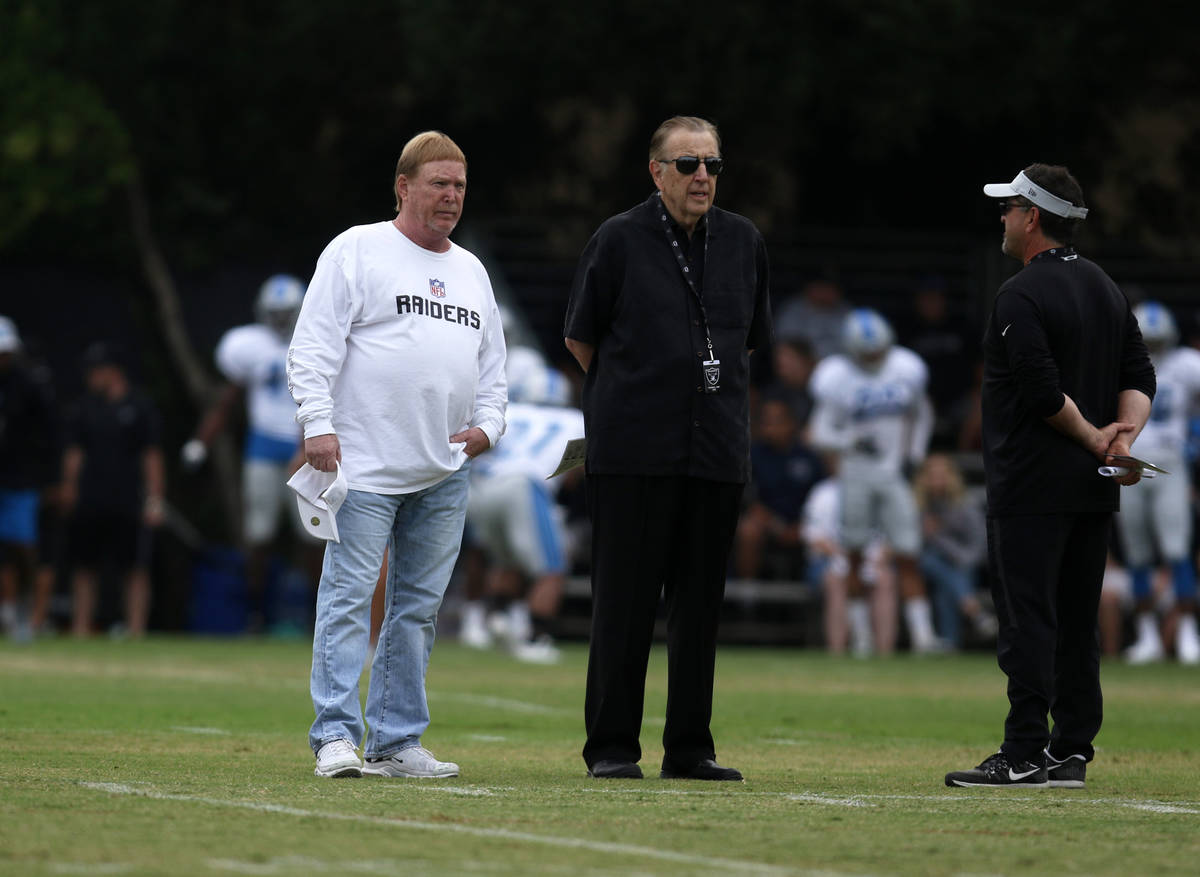 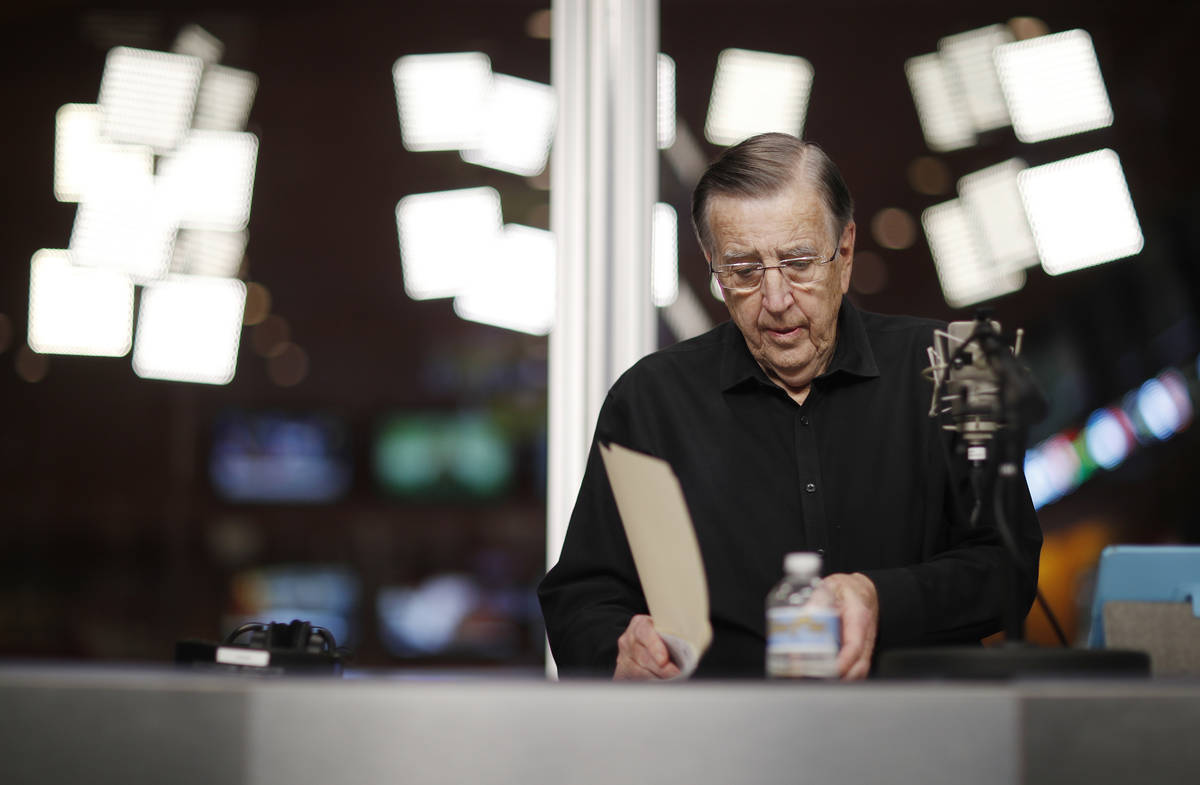 In this Nov. 16, 2017, photo, Brent Musburger looks at notes during a broadcast at the South Point hotel and casino in Las Vegas. During the show, part of the Vegas Stats & Information Network, Musburger and others talk about sports betting. (AP Photo/John Locher) 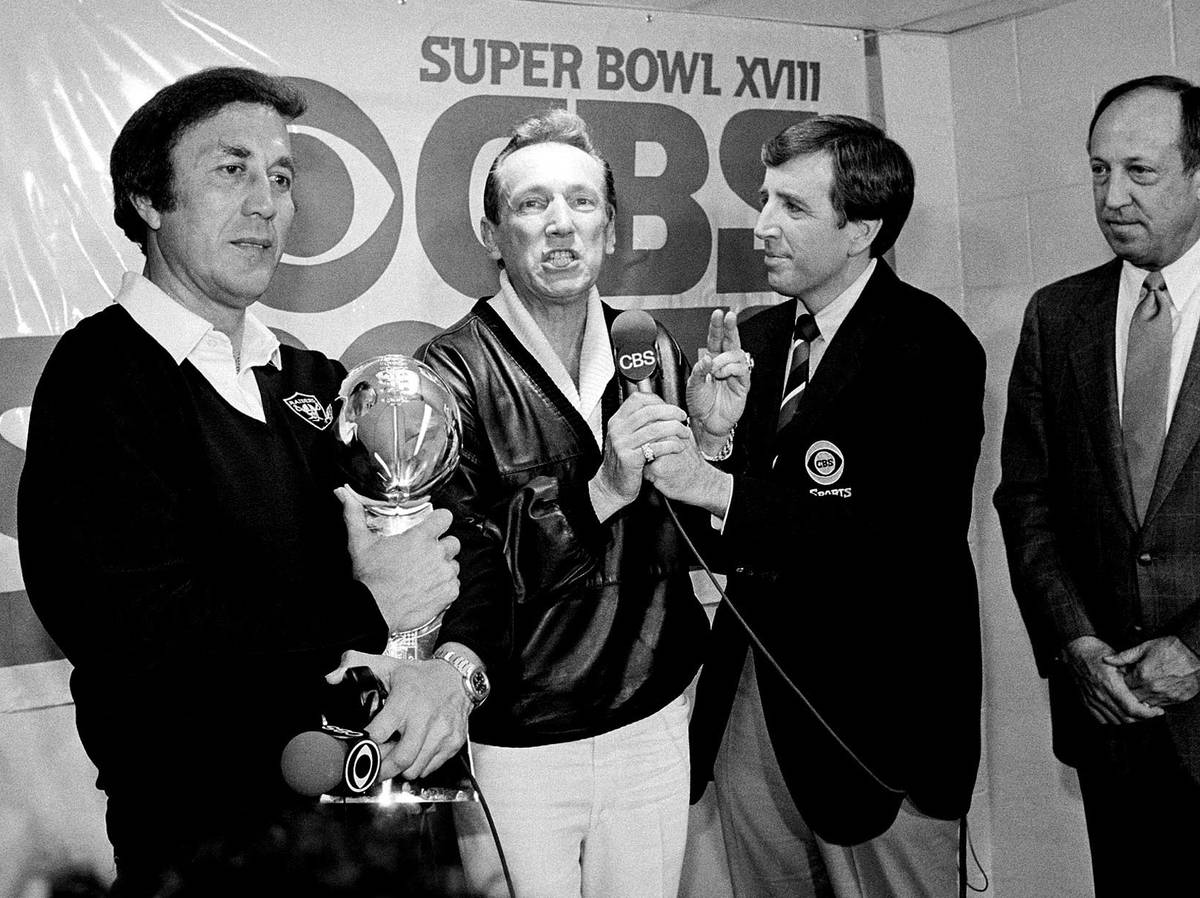 FILE - In this Jan. 23, 1984, file photo, Oakland Raiders coach Tom Flores clutches the Super Bowl trophy as Raiders managing general partner Al Davis is interviewed by Brent Musburger in the locker room after their 38-9 win over the Washington Redskins in Super Bowl XVIII in Tampa, Fla. At right is NFL Commissioner Pete Rozelle. Musburger is calling an end to his broadcast career. Millions of Americans experienced sporting events through his folksy narration, most often when he was the lead voice of CBS Sports during the 1980s. Musburger will call his last game for ESPN on Jan. 31, a college basketball contest pitting Kentucky against Georgia. (AP Photo/File)

He’d traveled the globe for nearly five decades to announce its most significant sporting events and was content living in Las Vegas, working for Vegas Stats &Information Network and enjoying the perks of retirement in one of the world’s most lavish cities.

That is until he crossed paths with Raiders owner Mark Davis at a Golden Knights game during their inaugural season. It sparked an impromptu job offer and an impromptu comeback on behalf of the Silver and Black.

Davis coaxed Musburger out of retirement and convinced him to become the play-by-play voice of the Raiders’ radio broadcasts. Musburger, 81, is now in his third year calling the team’s games and is among those invigorated by the team’s 3-2 start.

The legendary broadcaster signed a three-year contract in the summer of 2018, but hopes to keep calling the franchise’s games “until they tell me to stop.”

Musburger hails from Billings, Montana, where he grew up idolizing St. Louis Cardinals slugger Stan Musial and developed a lifelong fascination with athletics. His father was a basketball referee, and his dear childhood friend Dave McNally a standout pitcher, eventually for the Baltimore Orioles. And Musburger knew a career in journalism could put him in proximity with sports.

Actually, he initially was interested in becoming a print reporter after graduating from Northwestern’s prestigious journalism program. But as fate would have it, he found his way into broadcasting instead and emerged as one of the most prominent voices in sports.

He worked for CBS from 1973-1990, covering Super Bowls, NBA Finals, World Series, the NCAA Tournament and college football — among other prestigious sporting events.

He worked for ABC and ESPN from 1990 through 2017, focusing primarily on college football while again covering a litany of other sports before seemingly stepping away for good.

Musburger said he’s always been interested in the stories of the athletes, coaches and figures he covers more than the results of the games themselves.

The late heavyweight champion boxer Muhammad Ali, he said, was the most captivating athlete he’d ever covered. Former Boston College quarterback Doug Flutie’s Hail Mary completion in 1984 is among his favorite calls.

“I always love the excitement and the drama. I think it’s the greatest live drama in the world, a sporting event,” Musburger said by telephone from Montana, where he’s vacationing during the Raiders’ bye week. “I never had to grow up. I always go to the next game.”

Vegas and the Raiders

Musburger made his home in Jupiter, Florida, but moved in 2017 to Las Vegas upon retirement to help launch VSiN, the sports betting network based inside South Point. The traveling grew tiresome, and he’d long been fascinated by sports betting, having worked closely at CBS with the late “Jimmy the Greek” and befriending several local bookmakers during his play-by-play career.

“I’ve never seen anything in my lifetime come out of the dark back alleys and ascend to the penthouse as quickly as betting on sporting events did,” Musburger said, recalling how taboo sports betting once was. “It should be part of the conversation.

”You do not have to gamble to enjoy sports … But it’s part of the conversation, and the National Football League would not be as big as it is today without gambling. There is no doubt in my mind.”

Musburger was satisfied curating content for VSiN, his lifelong thirst for sport quenched by point spreads and point totals. He didn’t think Davis was serious about hiring him to call Raiders games.

“I wasn’t looking for another job at the time,” Musburger conceded. But the chance to chronicle the franchise’s transition from Oakland to Las Vegas turned out to be irresistible.

Musburger’s contract with the Raiders allowed him to immerse himself in the franchise and build the kind of long-term rapport he couldn’t necessarily cultivate amid all the national assignments. He’d attend the team’s Friday practices during his first two seasons on the job, though the coronavirus pandemic is limiting his access this season.

He’s also had to adjust calling games without the fans from which he’d so often draw energy during a dramatic call. It’s a process, he says, but he’s learning.

“People are going to love (Allegiant Stadium) when they come in from out of town to cheer on their team. Or a Raider fan in Las Vegas or a Raider fan driving in from Los Angeles or Oakland,” Musburger said. “That keeps me engaged, even in my senior age.

“I’m glad that they found me, because I’ve had a marvelous adventure with Jon Gruden and the Raiders over the last two plus seasons now into the third year. It’s been great.”

Davis is equally thrilled with the partnership and fondly remembered that Musburger was present to interview his late father, Al, the last time the Raiders were presented the Vince Lombardi Trophy after Super Bowl XVIII.

“That was the last really successful time we had, so that will live in infamy,” Davis said. “Initially, people were a little bit hesitant, but you haven’t heard any complaints. … I think people have gotten comfortable with Brent, understand his calls and all tha.t and I think they really enjoying listening to him.”