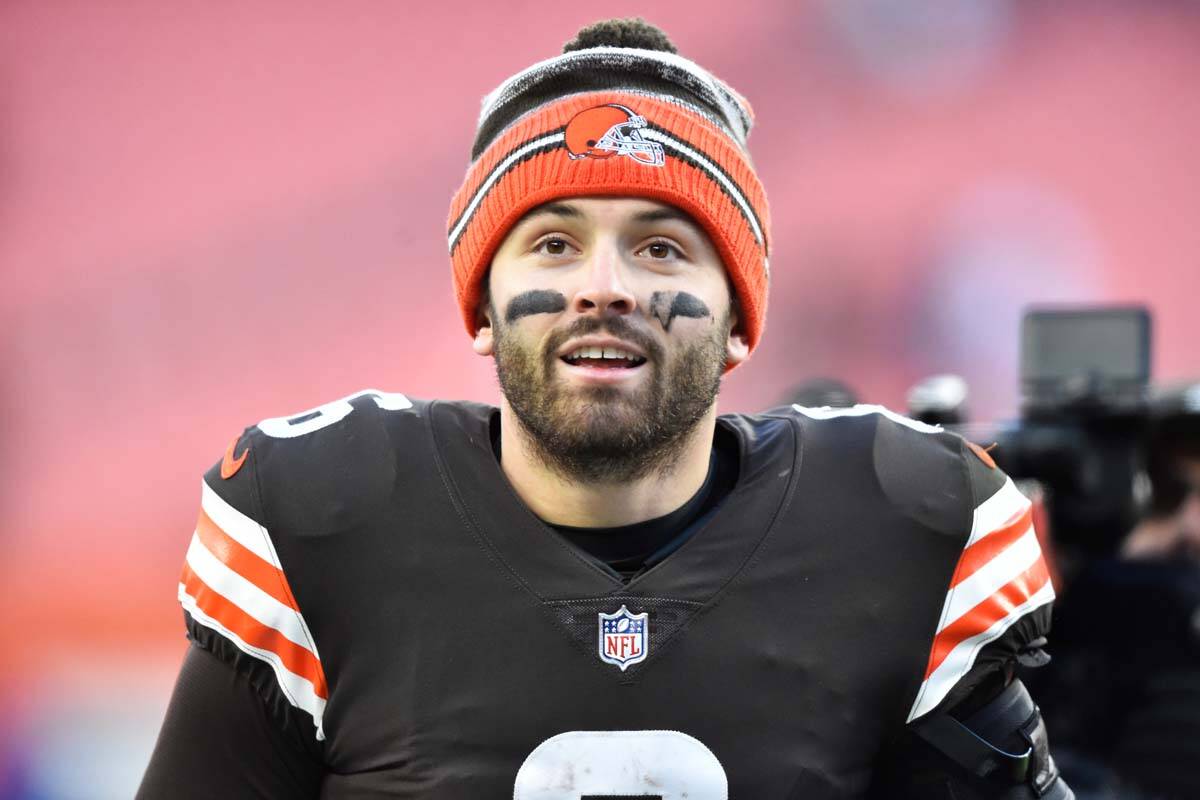 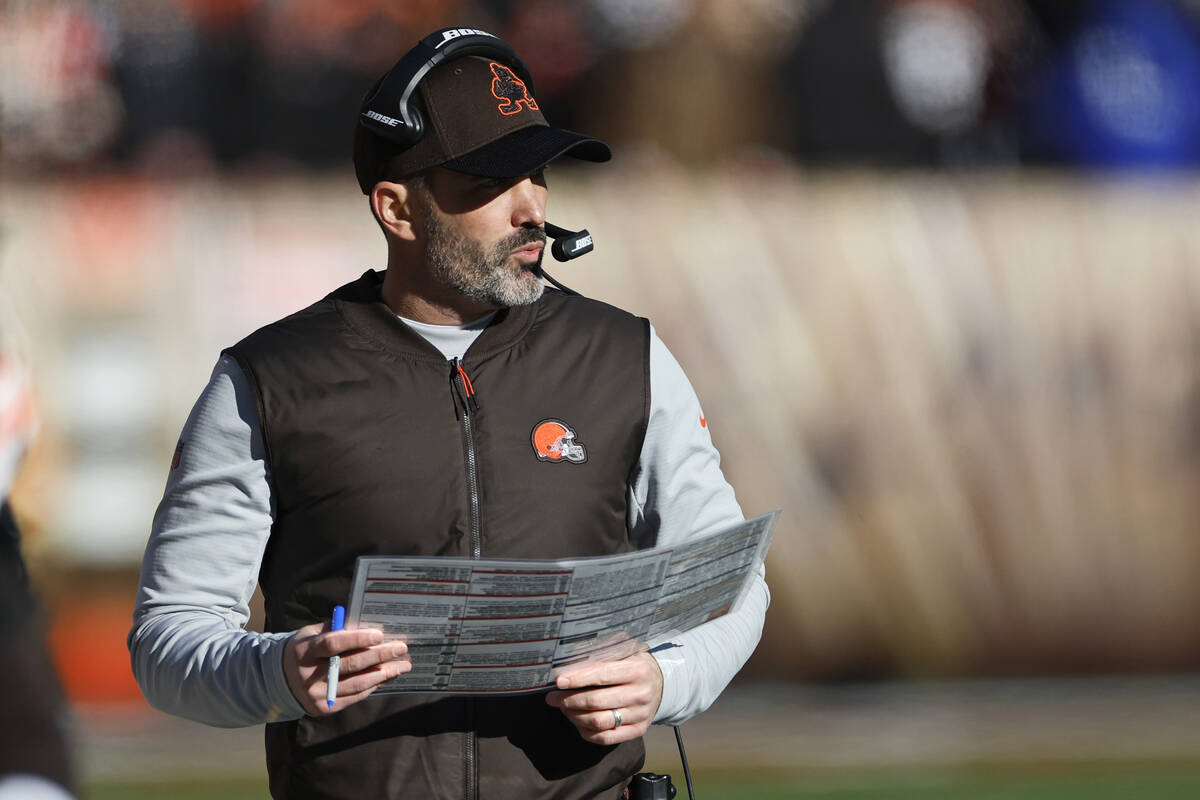 CLEVELAND — Browns quarterback Baker Mayfield tested positive for COVID-19 and will likely miss Saturday’s game against the Raiders as Cleveland deals with a widespread virus outbreak, a person familiar with the situation told the Associated Press.

The news caused the Raiders to call a bit of an audible on their practice plans. Wednesday was the day the defense had planned to go over the tendencies of the opposing quarterback. That is now likely to be veteran Case Keenum.

“We looked at both of their styles,” defensive coordinator Gus Bradley said, before focusing on Keenum. “Demeanor and how he handles himself under pressure. Does he escape, does he extend? Those kinds of things. He’s played a lot of good football.”

The Raiders have great respect for Keenum and the Browns’ offense. “ Really, really good running team,” Bradley said. “And he does things very well if he’s at the helm.”

The Browns COVID issues extend far beyond just their starting quarterback. Coach Kevin Stefanski also tested positive as the Browns try to make the playoffs for the second year in a row.

Mayfield, who has been dealing with injuries all season, was one of the new positive cases on Wednesday, said the person who spoke on condition of anonymity as the Browns continued testing.

The test results for Mayfield and Stefanski came after the Browns on Tuesday placed eight players on the COVID-19 list.

A total of 96 NFL players have been placed in protocols over the last three days, the three days with the most positive tests since the system was implemented last year.

The Raiders have not yet been affected by this wave of infections, which is likely spurred by the Omicron variant.

“I just try to stay in the house, stay away from people and stay COVID-free because I have a daughter at home,” he said. “The holidays are coming upon us, so I’m just trying to do the best I can. I’m sure everybody else is too.”

Roger Goodell said during a news conference at the owners meetings in Dallas that the league has no plans to cancel or postpone the game. The Raiders are operating on that assumption.

“We’ve seen a lot of unprecedented things the last two years, so we’ll roll with it,” offensive coordinator Greg Olson said Wednesday. “It looks right now like we’re going to play the game, so we’re just preparing our guys right now based on what we’ve seen on film.”

“They have two great running backs and being down guys really doesn’t matter,” Hankins said. “They’re going to find guys to go in there and perform. We just have to go out there and do our job and do a better job stopping the run and try to get a win and get back on track.”

Stefanksi is vaccinated and received a booster shot. The team said in statement he’s “feeling fine.” He is not showing any symptoms and will continue to coach the team remotely this week as the 7-6 Browns prepare to the face the 6-7 Raiders.

He and the other affected players will have to be asymptomatic and produce two negative tests to be eligible to participate in Saturday’s game.

Last season, Stefanski tested positive in the days leading up to the Browns’ wild-card game at Pittsburgh and was required to isolate at home. He was the AP’s Coach of the Year in his first season.

If Stefanski is out, special teams coordinator Mike Priefer will serve as acting head coach just as he did in January’s game at Pittsburgh.

As the spread continues, it’s possible the Browns could be without even more players by kickoff Saturday. Raiders’ offensive coordinator Greg Olson said the team could make adjustments based on what personnel the Browns have available. For example, they could go uptempo more to try wear down the defensive line should Cleveland only have four available bodies.

“When they are missing significant numbers at a certain position, their gameplan may be simplified,” Olson said. “Because they may have to bring in guys off the street or practice-squad players who haven’t been in the system. So we’ll see on Saturday when we get the inactives to tweak what we have to tweak.”

The Browns played a short-handed game against the Broncos in October, winning 17-14 despite Mayfield and star running backs Nick Chubb and Kareem Hunt due to injuries.

Bradley said watching that game has shown the Browns are capable of establishing their identity regardless of who is in the lineup.

Keenum threw for 199 yards and reserve D’Ernest Johnson ran for 146 in the victory.

“It was important for us when we looked at it because they’re pretty defined in who they want to be and what they are,” Bradley said. “Extremely good running team. They have the play-action passes off of it that create challenges. It’s a good game to look at to say, ‘They have a very talented roster and they’re very well coached.’ The next man up is definitely their mentality. We saw that in the Denver game.”