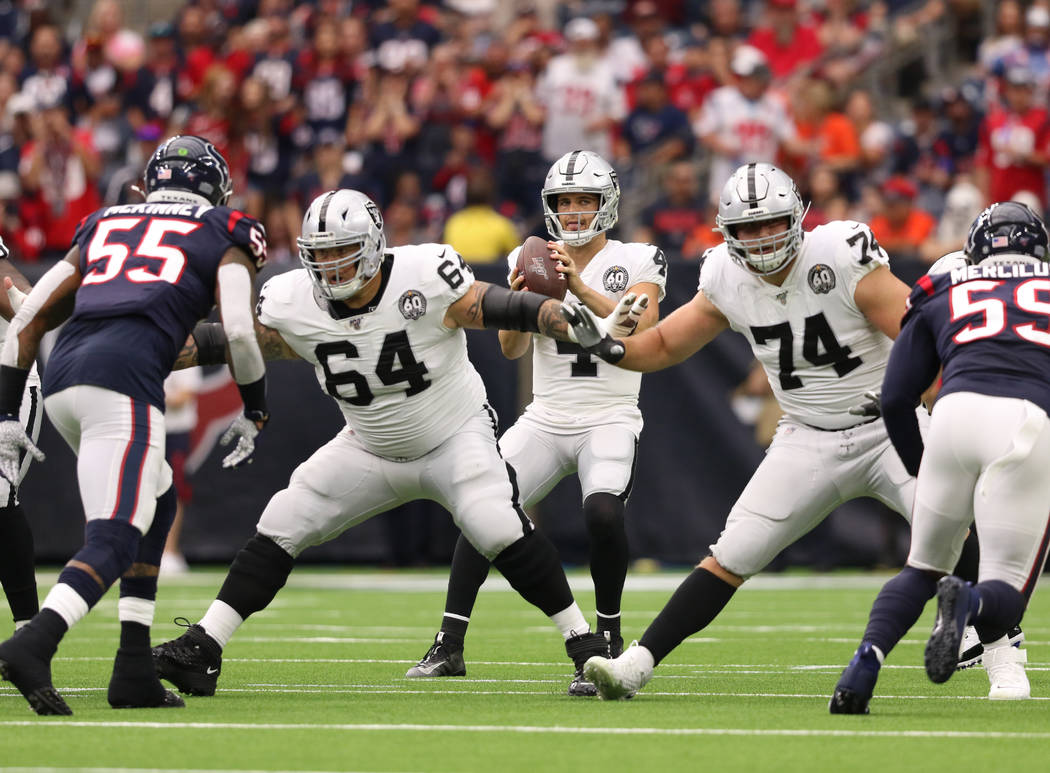 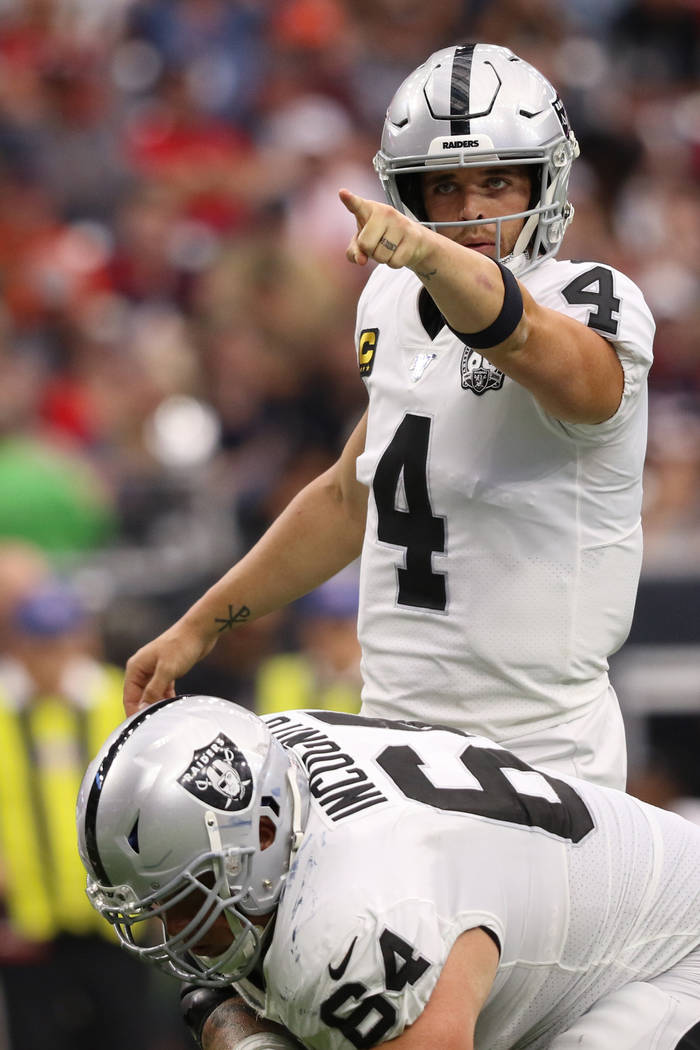 Oakland Raiders quarterback Derek Carr (4) points to a defender from the line of scrimmage as offensive guard Richie Incognito (64) sets himself during the first half of an NFL game against the Houston Texans at NRG Stadium in Houston, Texas, Sunday, Oct. 27, 2019. (Heidi Fang /Las Vegas Review-Journal) @HeidiFang

ALAMEDA, Calif. — While the Raiders haven’t had the expected consistency and continuity across their offensive line, the club still has been able to give quarterback Derek Carr some of the best pass protection of his career. That has made the offense significantly more effective.

So far this season, Carr has been sacked eight times — or just 3.5 percent of his dropbacks. He was sacked at a lower rate only once, in 2016, when he finished at a league-leading 2.8 percent.

Despite starting five combinations on the offensive line in seven games — with likely a projected sixth this week given center Rodney Hudson’s ankle injury — the Raiders haven’t given up a sack in three consecutive games. They also did not surrender a sack in their opening win over the Broncos, making them the only team in the league with as many as four sack-less games.

“We’ve had a lot of people play, and they’ve all done well for us,” Carr said.

That’s in stark contrast to last season, when Carr was sacked a career-high 51 times on 8.4 percent of his dropbacks.

Carr says he “absolutely” feels better now than he did at this point last season.

“It was tough because the guys that are hitting me are not defensive backs — they’re much, much bigger than me,” Carr said. “I definitely feel different this year. I feel as fresh as can be with all the games that we’ve played already.”

Offensive coordinator Greg Olson noted Carr’s protection lessens the anxiety for the quarterback once the ball gets snapped.

“I know he’s very comfortable right now in the pocket. And that’s a really good feeling for him,” Olson said.

But aside from Carr feeling better from taking fewer hits, the improved pass protection has paid other dividends. After finishing 28th in points scored and 23rd in yards last year, the Raiders are 18th in points and 14th in yards this season.

Carr is averaging 7.7 yards per attempt passing, which would be the highest mark of his career. That particular stat correlates to Carr connecting on some longer passes. According to Olson, Carr has a better understanding of head coach Jon Gruden’s offense, which is part of what leads to those deep shots.

“That’s still a process, but I think he’s got a better feel for, situationally, when Jon’s looking for that shot play down the field,” Olson said. “Play design and understanding the intent of the play is a big part of it. So he’s getting better at that. When those opportunities are there, we’d like to see him take advantage of them.”

The other aspect of the Raiders’ passing game that has been inconsistent is their wide receivers group. The club has started six combinations at wide receiver . But with Tyrell Williams healthy and Zay Jones and Trevor Davis getting more integrated into the scheme, the group should be more settled.

“We’d say competition brings out the best in everybody, and now we have a competitive room in the wide receivers room,” Olson said.

And with Carr and Gruden’s growing connection, the Raiders have been able to show clear improvement on offense from last season to now.