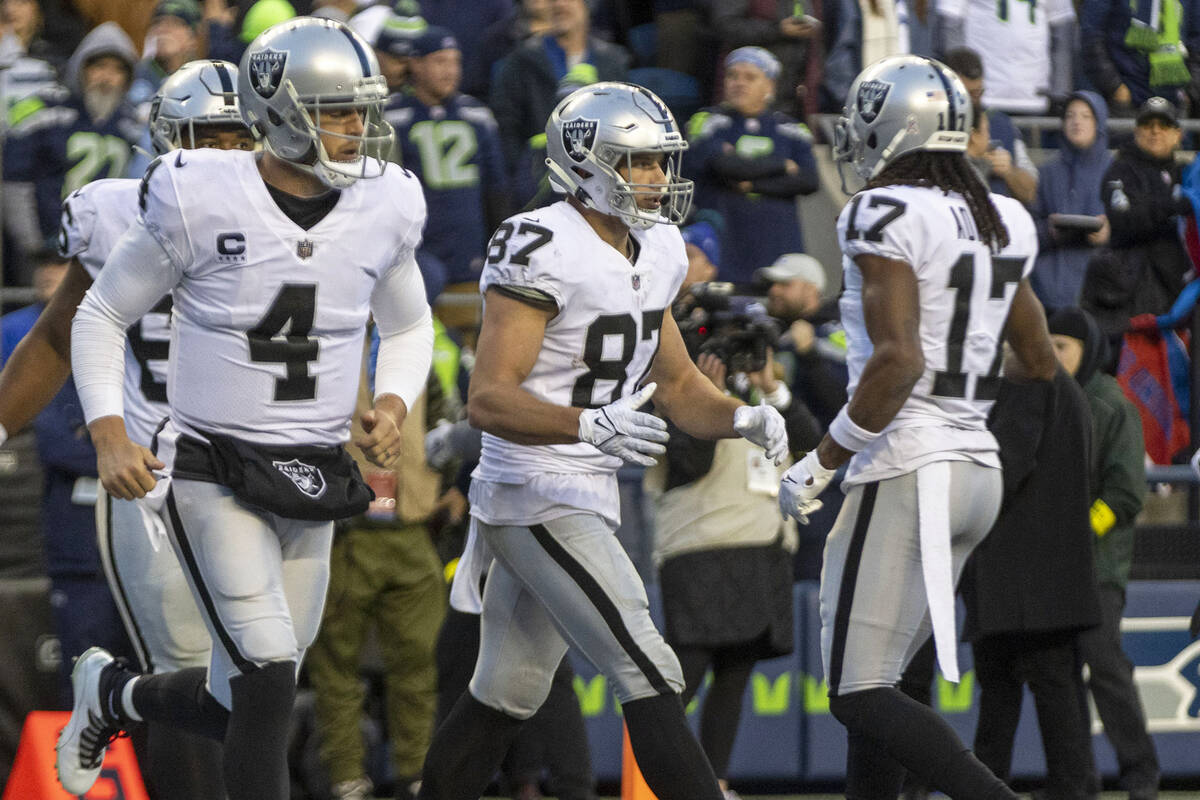 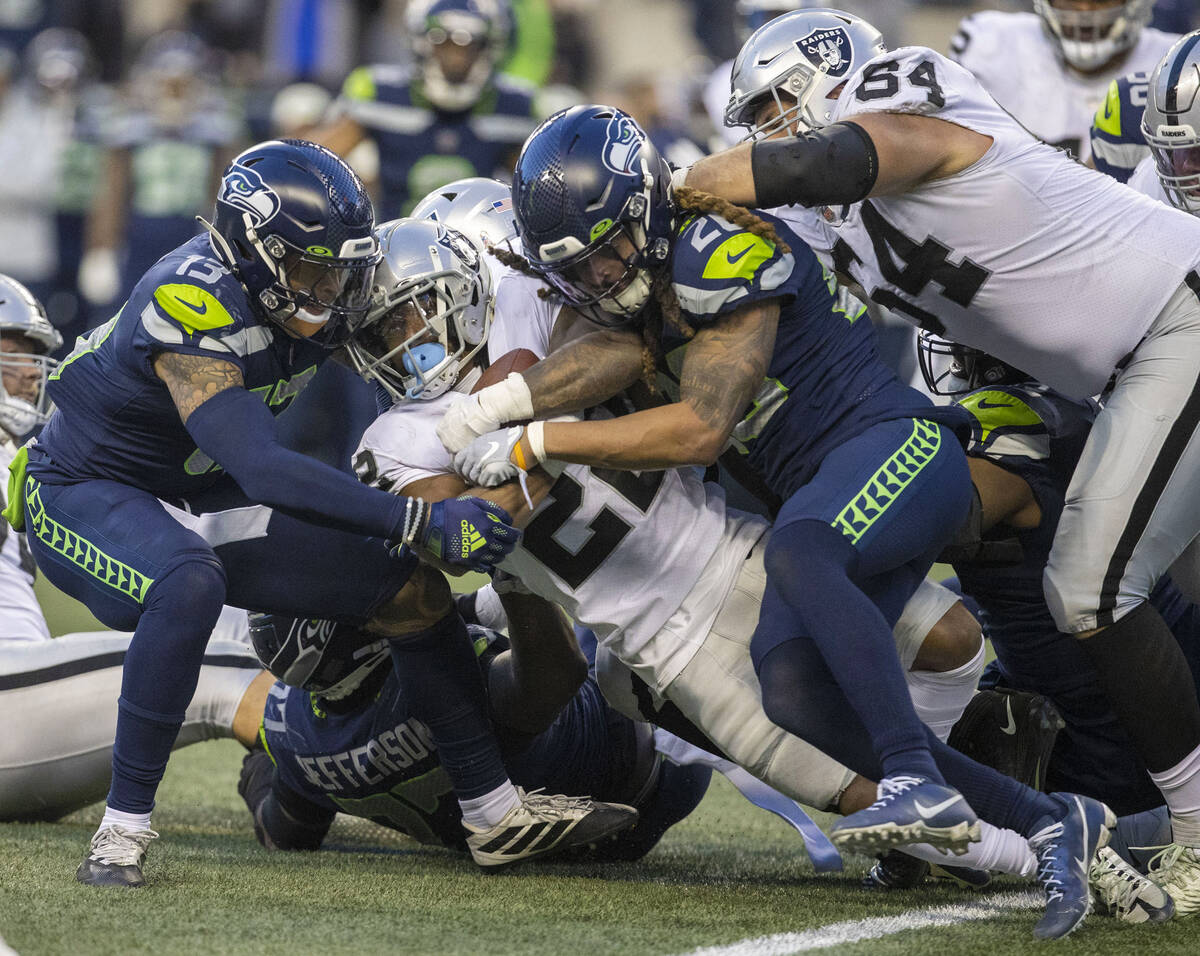 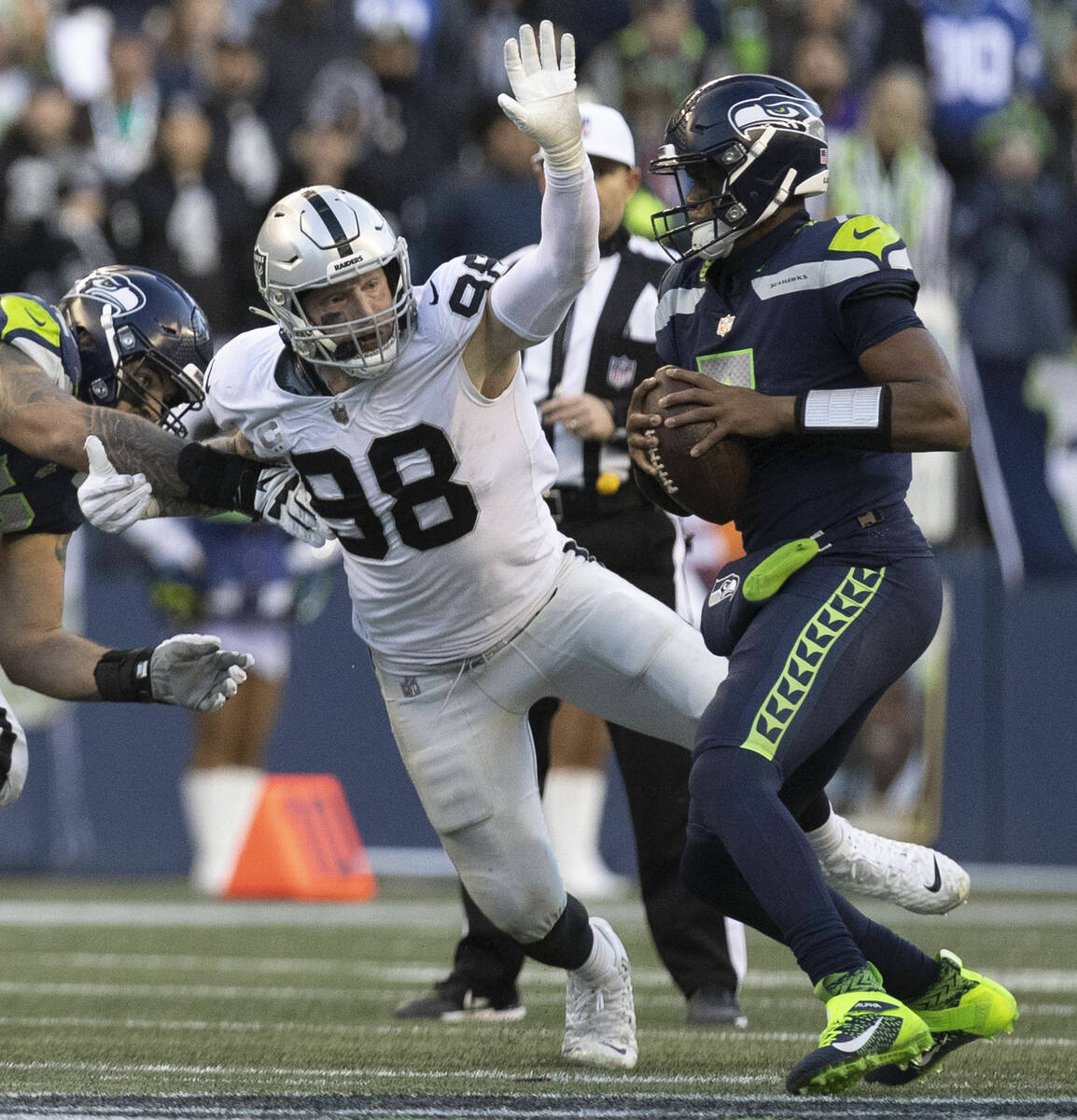 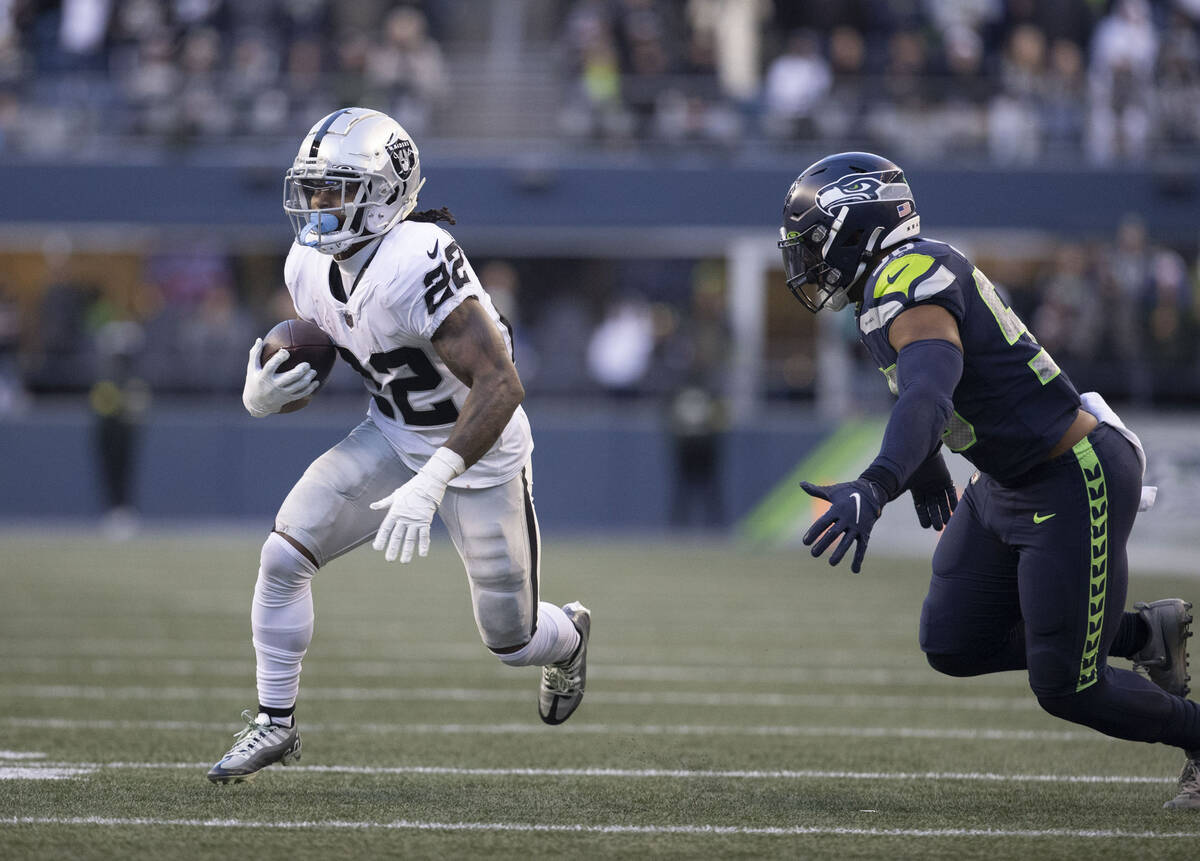 Raiders running back Ameer Abdullah (22) looks for room to run against Seattle Seahawks linebacker Jordyn Brooks (56) during the second half of an NFL game at Lumen Field on Sunday, Nov. 27, 2022, in Seattle. (Heidi Fang/Las Vegas Review-Journal) @HeidiFang

Thrust into the starting role because of the long injury absence of Darren Waller, Moreau was a part of two polar opposite plays that left him dealing with a wide range of emotions during the Raiders’ 40-34 overtime victory over the Seahawks at Lumen Field.

The first was when he dropped an on-target throw by quarterback Derek Carr to end a promising drive late in the third quarter.

Moreau isn’t one to sugarcoat things. He knows how damaging the drop was, so he wasn’t about to pretend otherwise.

“I obviously gotta go on the damn Jugs machine,” he said.

But Moreau made sure not to let that drop define him. Late in the fourth quarter, he ran a slick route to the back corner of the end zone on third and goal and caught the game-tying touchdown pass from Carr.

Part of that is understanding that the bigger role he’s assumed in Waller’s absence means more opportunity to do good. But with that comes the inevitable reality that there will be mistakes, too.

“This has been a process for me, how to handle plays like that,” Moreau said. “Oftentimes I play off of Darren, and there’s not much adversity when doing that. I’ll come in, block my butt off, and do that. So just continuing to try to learn how to be the best player I can with the ball in my hands. And making opportunities when (Carr) gives me the chance.”

Raiders backup running back Ameer Abdullah and Carr seem to be watching a lot of the World Cup. How else do you explain their touchdown play in which they improvised on a completion by perfectly playing off each other.

“Soccer is a free-flowing sport,” said Carr, explaining how he and Abdullah used their eyes and feel for the situation to break away from the original intent of the play for an 18-yard touchdown to tie the game 7-7.

“We caught the safety being a little too nosy,” Abdullah said. “Good timing.”

On the third-down play, Abdullah lined up in the backfield to the right of Carr, then curved to the right and looked back at Carr about a yard off the line of scrimmage. Carr looked straight at Abdullah, but rather than immediately throw the ball to him, he waited for safety Quandre Diggs to jump the route.

Abdullah, understanding what Carr was thinking, immediately wheeled his route upfield, running past the surprised Diggs in the process. Carr held the ball one extra second, then lofted it to Abdullah for an easy touchdown.

“That was all Ameer being able to think what I was thinking,” Carr said. “So it was not planned that way.”

Abdullah had three catches for 39 yards and three kickoff returns for 73 yards, including a 33-yard return.

The last time Carr played in Seattle in a regular-season game was his rookie season in 2014. His return reiterated his respect for the atmosphere.

“It was incredible; one of the best atmospheres in the league,” he said.

That said, Carr felt the presence of Raiders fans.

“It was pretty impressive to hear how many of our fans were here,” he said. “We had a whole bunch of Raiders fans behind our bench, and after bad plays, they were like, ‘You guys are good, we’re gonna win the game.’ Anytime you’re in a hostile place and you hear those types of things, it always means something.”