The Raiders will go into Denver on Sunday looking for the season sweep of the Broncos and to give themselves an opportunity for postseason play but with multiple injuries on the roster the reserves will once again have to step up in their absence.(Le'Andre Fox/Las Vegas Review-Journal)
By Myles Simmons / Las Vegas Review-Journal
December 23, 2019 - 5:04 pm 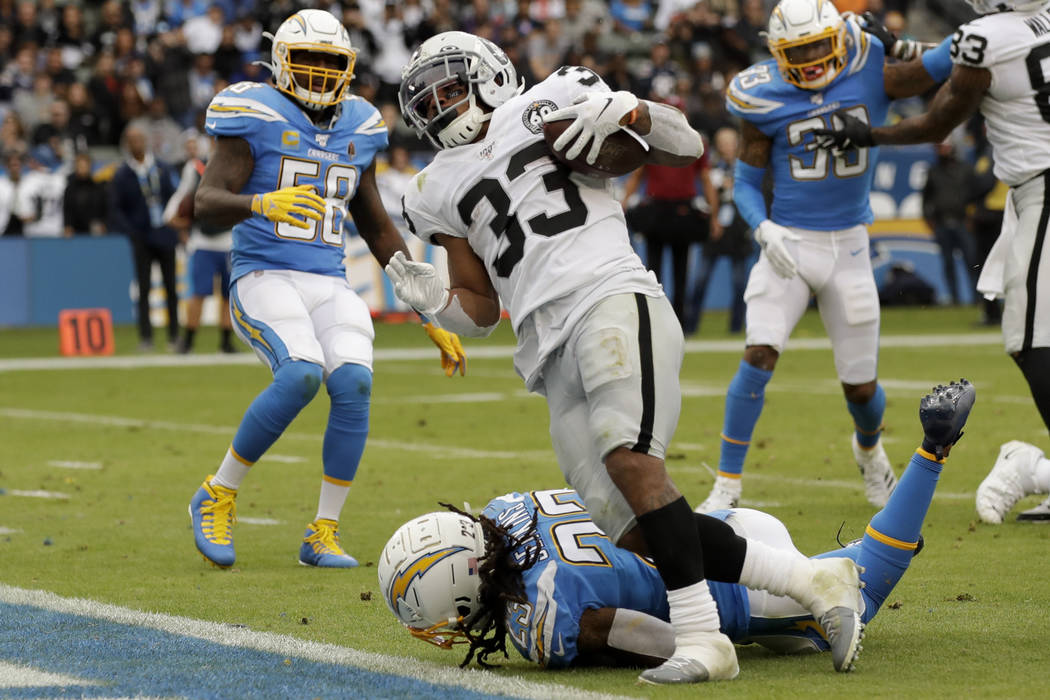 ALAMEDA, Calif. — While the Raiders’ playoff chances have been slim ever since their back-to-back losses to the Jets and Chiefs in November, enough has happened to keep Oakland alive at the start of Week 17.

If they defeat the Broncos, the Raiders will need significant help to make it happen — with losses by the Titans and Steelers, plus a Colts victory. According to NFL Research, there are 64 scenarios for AFC seeding based on the results in Week 17. The Raiders are the No. 6 seed in only four of them.

So mathematically, it’s still improbable that the Raiders will finish with a playoff spot. But if nothing else, the final regular-season game will provide a chance to evaluate players in a highly competitive situation.

“It was the same situation yesterday,” Raiders head coach Jon Gruden said. “We had some guys really step up big time. You watch (Hunter) Renfrow and (Daryl) Worley and DeAndré (Washington) and a number of other players that really did a good job.”

If the Raiders are to defeat the Broncos, they’ll likely need repeat performances from those three players. Playing for the first time since suffering a rib injury in Week 12 against the Jets, Renfrow finished with 100 yards receiving for the first time any level, high school, college or pro.

“He just gives you such a sense of confidence in some tough passing situations,” Gruden said. “He can run different routes. and he’s very friendly with his route-running style. He rarely fools the quarterback. He’s got a lot of savvy for a young guy, to say the least.”

Gruden praised Worley’s contributions on defense following the game and noted it again on Monday. With injuries piling up in the secondary, Oakland relied on Worley to play multiple positions within the scheme and it paid off.

“There’s a lot of things that he can do and I think yesterday was a great step in that direction,” Gruden said.

Starting for the injured Josh Jacobs, Washington took a career high 23 carries and finished with more than 100 yards from scrimmage for just the second time in his career.

“When you’re around him, you see a guy who’s really professional,” Gruden said. “Those are the kinds of guys that allow us, I think, to win a game like we did yesterday, because in a tough spot, we can ask him to do a number of things well — and he did it.”

While the Raiders’ injury concerns have piled up, particularly in recent weeks, there could be good news for the club on the horizon. Gruden said Jacobs has a chance to play in Denver after missing his second game in three weeks with an injured shoulder on Sunday. Gruden called starting left guard Richie Incognito — who didn’t play in Sunday’s win with an ankle injury — questionable at this point in the week.

But it’s at defensive back where the Raiders probably got the best prognoses. Gruden said both Trayvon Mullen and Lamarcus Joyner may play on Sunday. Mullen left the game on a stretcher with an injured neck. Joyner exited with a calf injury and did not return.

With the NFL’s decision to reschedule the games affecting the AFC’s No. 6 seed to 1:25 p.m. PT on Sunday — the Raiders will still be “in the hunt” as their game with the Broncos begins. But even if there’s a lopsided score that could eliminate Oakland, Gruden indicated the Raiders will continue to play whoever’s available to help the team win.

Should the Raiders do so, they’ll at least put themselves in position to get one of those four scenarios landing them the No. 6 seed in the AFC.

“You can’t control what’s going on,” Gruden said. “And if we get some help, that’ll be great.”