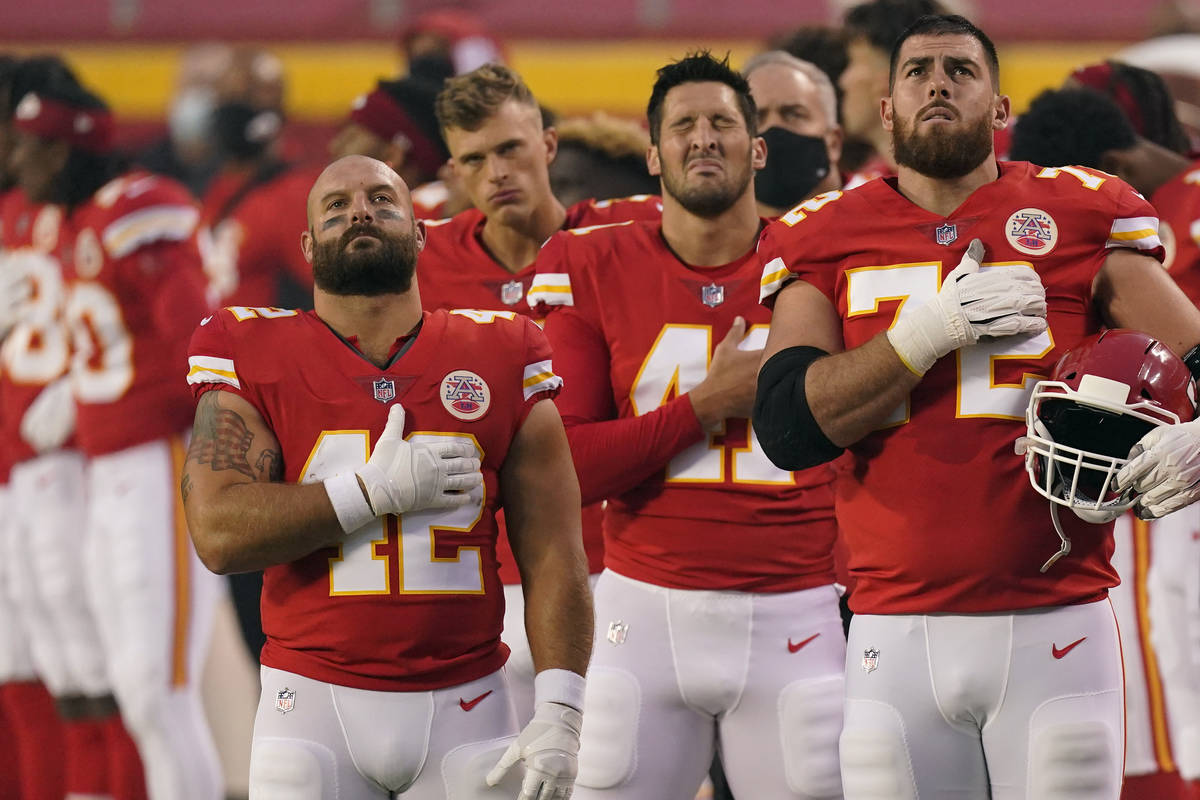 Raiders coach Jon Gruden said his players have discussed a plan for how to handle the playing of the national anthem before Sunday’s season-opener in Carolina.

Friday wasn’t the right time to discuss it.

“Today is (Sept. 11), which is a day where we really need to consider all the people that suffered and how awful that day was,” he said Friday before the team departed for the trip to Charlotte.

One member of the Kansas City Chiefs, defensive end Alex Okafor, kneeled for the anthem before Thursday’s game against Houston. The Texans remained in the locker room for both the national anthem and the Black national anthem, “Lift Ev’ry Voice And Sing.”

Both songs are scheduled to be played before every Week 1 game. The Texans and Chiefs locked arms in a moment of unity between the anthems and kickoff on Thursday, drawing some boos from the limited crowd in attendance.

“I think we’re all together on what we’re going to do,” Gruden said. “I just hope our country can unite quickly. That’s all I’m hoping for. Our players have discussed it and I’ll leave it at that.”

The Raiders boarded buses shortly after noon to head to the airport for their first trip under this season’s enhanced health and safety protocols.

Gruden said while the rules are unyielding, there is good reason to follow them.

“It’s very strict, and I give credit for making it strict,” he said. “This virus is still knocking people to their knees. It ticks me off. We’ve got to do a better job disciplining ourselves. We can’t let up. We’re getting better, but the NFL has given stringent rules for what we can and can’t do and we have to follow them.”

Former Raider Marcel Reece has joined the organization as a senior adviser to Davis and team president Marc Badain, the Raiders announced Friday.

Reece played for the Raiders from 2008 until 2016. He signed with the Seahawks upon his release, but never played a game for Seattle.

Reece will be focused on the Raiders’ initiatives in the community as they continue to integrate the franchise into Las Vegas.

The Friday injury report is typically the most important of the week in the NFL and the best indicator of gameday availability. It provided good news for the Raiders this week.

None of the 10 players listed will carry an injury designation into Sunday’s game.

That includes tackle Trent Brown, who missed a significant portion of training camp. Brown was limited on Wednesday with a thigh injury, but got in full sessions on Thursday and Friday.

“He looks healthy,” offensive coordinator Greg Olson said Thursday. “He looked good today and that’s all we can go on.”

Gruden said the 10 players listed with some form of injury were mostly there because of league-mandated procedures.

“Nowadays you get to list every single thing that comes up,” he said Friday. “We’re in good shape. We’re ready to go.”

Flag on the play

The Raiders are 0-5 in games refereed by Brad Allen since he started on the job in 2014.

Allen will head the crew on Sunday in Charlotte, marking the first Raiders game he’s officiated since Tennessee won 42-21 in Oakland last December.

Over those five games, Allen’s crews have called an average of 6.2 penalties for 57.2 yards per game on the Raiders. That includes a 13-penalty slopfest in which the Raiders were assessed 125 yards in a New Year’s Day 2017 game against the Broncos.