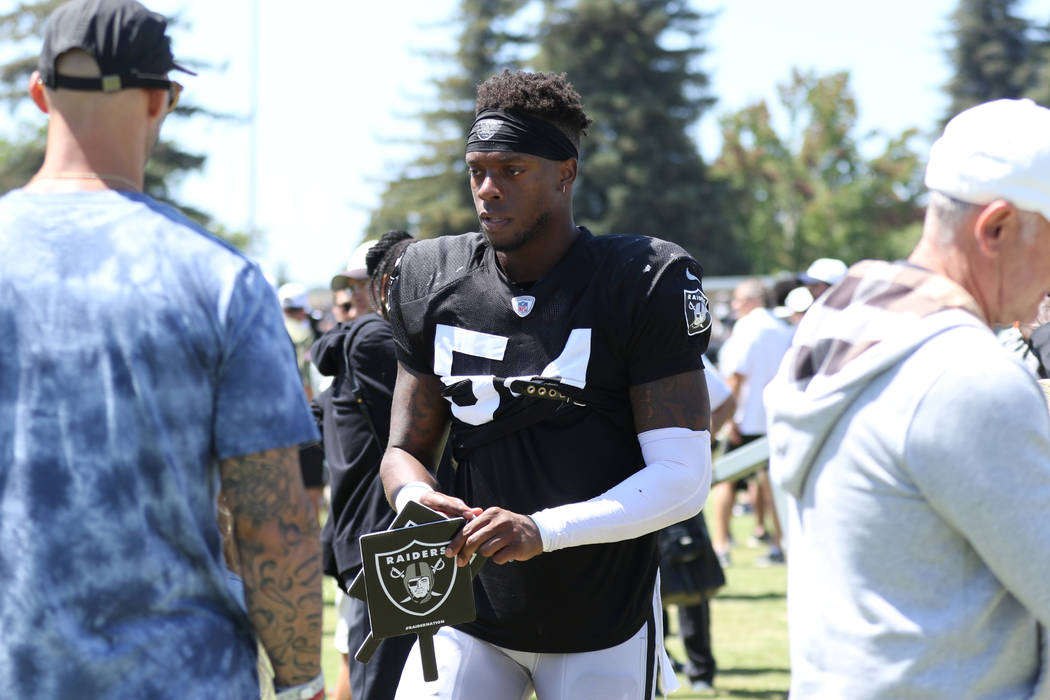 ALAMEDA, Calif. — When the Raiders cut linebacker Brandon Marshall just before the regular season, he threw away his playbook.

That’s at least what he told the media standing in front of his locker with a laugh on Thursday afternoon, following his second practice after re-signing with the team on Tuesday.

Marshall may have been speaking more metaphorically than literally, since most teams distribute their playbooks electronically on iPads nowadays. But Marshall nevertheless is back in Silver and Black, as the Raiders needed more linebackers to combat the injuries and suspension within the group.

Marshall admitted he wasn’t happy when he got cut — “Who would be happy getting released?” he said — but said there were no hard feelings when it happened. Marshall said he followed the Raiders from afar during his break, catching them when they were on television in Denver where he trained.

While Marshall said he had a couple calls from other teams, nothing came to fruition. He even thought the Raiders might call him back when Vontaze Burfict got suspended — and that suspension was upheld — but the opportunity didn’t come quite yet.

Instead, at that point, the Raiders went with younger linebackers like Justin Phillips, who just suffered a season-ending knee injury, and Dakota Allen, who the team cut on Wednesday.

Marshall said he understood the Raiders wanting to go younger at that point. But now that he’s back, Marshall said he feels good about picking up where he left off and contributing wherever needed.

“I kind of just had to re-introduce myself to some of the scheme, some of the blitzes,” Marshall said. “A lot of it’s still familiar, but I haven’t learned it in two months. So I’ve got to have a refresher because it’s tough when you’re out — you’re not sure if you’re gonna come back or not. But I’m doing well.”

Marshall wasn’t fully healthy during training camp, coming back from a knee injury. But he says his knee is fine now, and that the time off helped.

Defensive coordinator Paul Guenther said Marshall has looked good since returning to the club. With the injury to Phillips, Guenther said bringing back Marshall “was an obvious choice.”

Marshall noted he’s not quite sure what his role might be for Sunday against the Detroit Lions. But he’s looking forward to being on the field after his time away from the game.

“I’m not sure they’re asking a whole lot of me at the moment, so I’ve just got to get out there and go — that’s all I need,” Marshall said.

Offensive rookie of the month

Running back Josh Jacobs has been named AFC Offensive Rookie of the Month after putting up 313 yards and two touchdowns rushing, and 45 yards on eight receptions in three October games.

“Congratulations to Josh Jacobs,” offensive coordinator Greg Olson said. “Certainly deserving of the honor. We’re excited as a staff to see how far he’s come, and we’re certainly excited about what the future holds for him.”

Jacobs rushed for 123 yards and two touchdowns in the Raiders’ 24-21 victory over the Bears in London. Then he scored another career high with 124 yards rushing in the Raiders’ 42-24 loss to the Packers in Week 7.

The Raiders still have issues at center, with starter Rodney Hudson (ankle) and backup Andre James (ankle) listed as non-participants for Thursday’s practice.

However, Olson said his level of concern is “really not that high, to be honest with you.”

“Both Rodney and Andre James were out there today. They both felt good. They looked good walking around,” Olson said.

“He played center for me when I was with the St. Louis Rams a long time ago, and he played it very well,” Olson said. “He got some work there today.”

Olson and Incognito were together in St. Louis in 2006 and 2007, with Olson as the team’s offensive coordinator.

Elsewhere on the injury report, safety Erik Harris (illness), wide receiver/return specialist Dwayne Harris (foot) and defensive end Josh Mauro (groin) did not participate. P.J. Hall (shoulder) was added to the injury report on Thursday as being limited in the session.