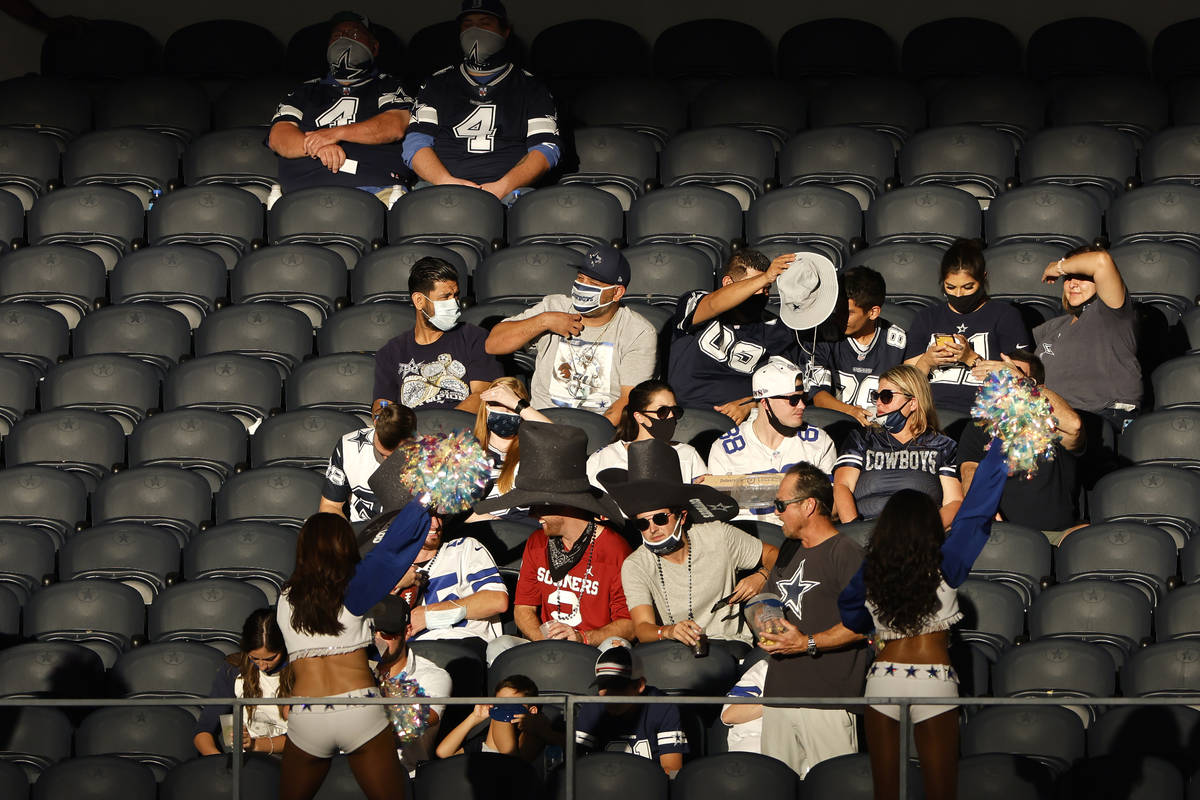 Fans watch a game between the Dallas Cowboys and the New York Giants in the second half of an NFL football game in Arlington, Texas, Sunday, Oct. 11, 2020. (AP Photo/Ron Jenkins) 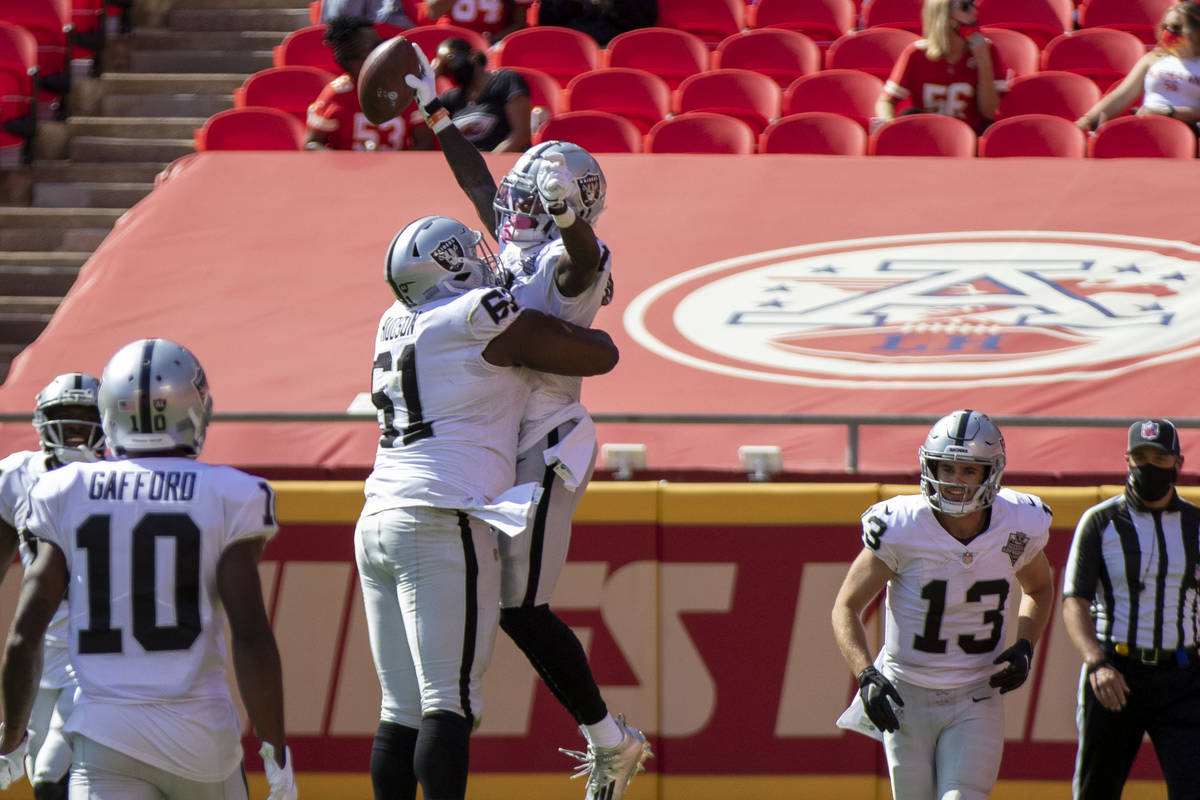 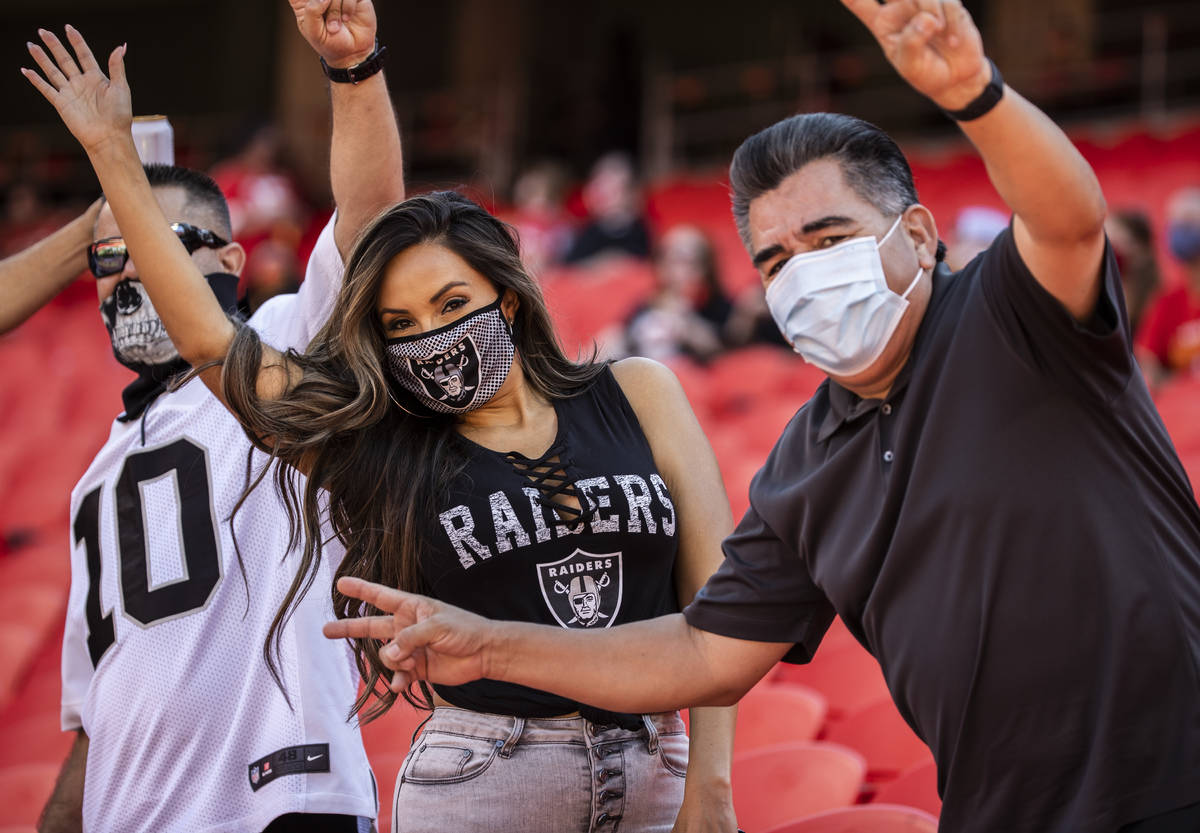 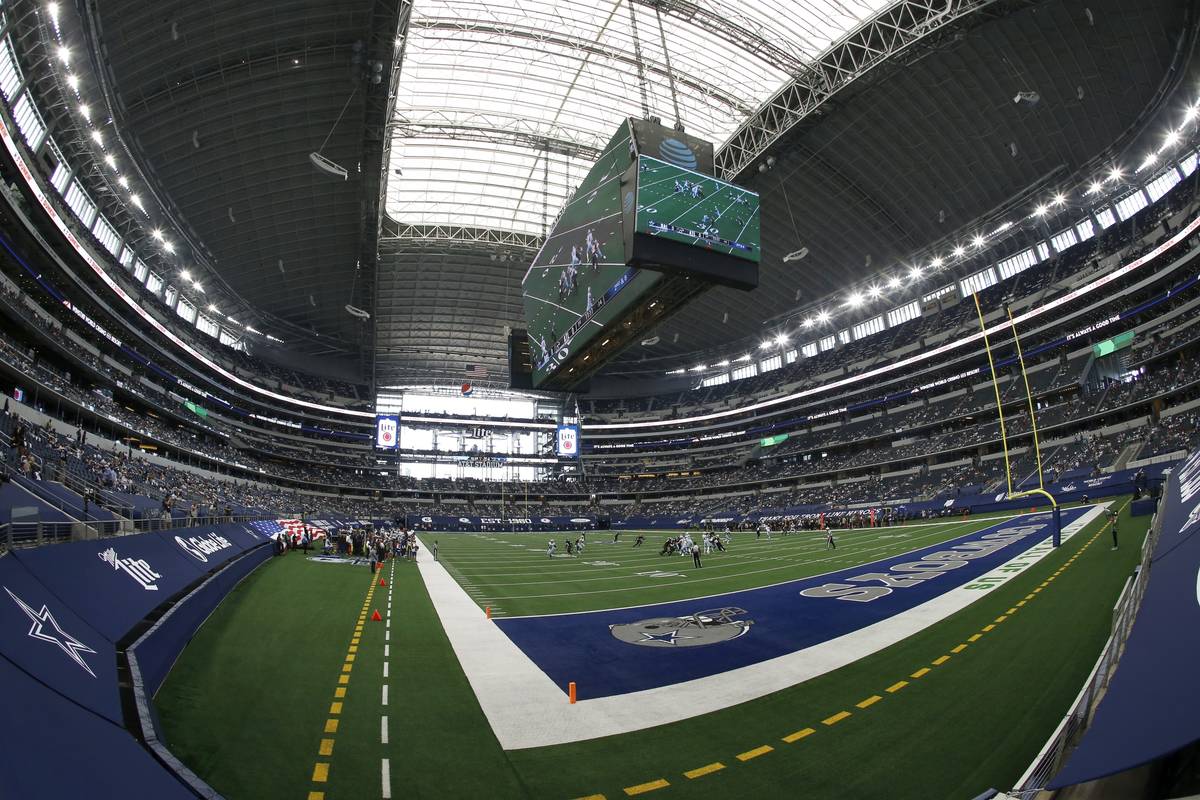 Fans watch as the Atlanta Falcons play the Dallas Cowboys at AT&T Stadium in the first half of an NFL football game in Arlington, Texas, Sunday, Sept. 20, 2020. (AP Photo/Ron Jenkins) 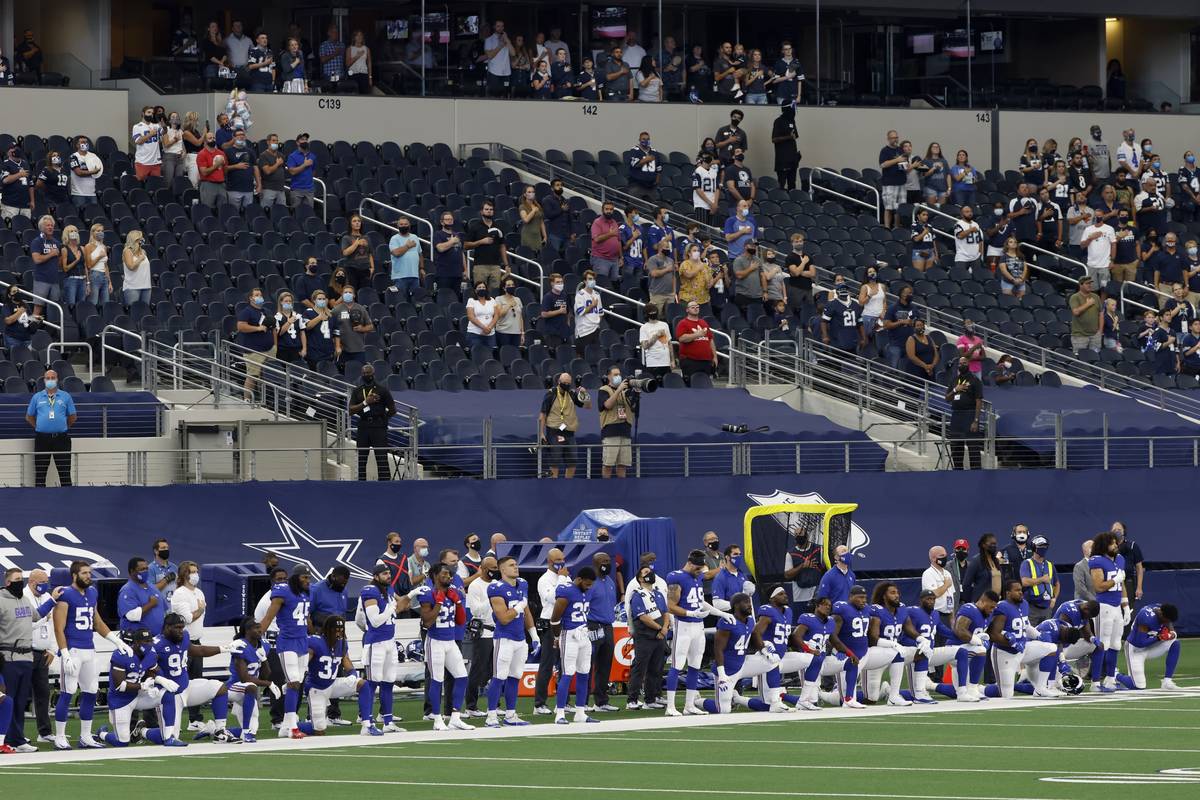 Players and staff of the New York Giants stand and kneel as they and fans in attendance listen to the national anthem before the first half of an NFL football game against the Dallas Cowboys in Arlington, Texas, Sunday, Oct. 11, 2020. (AP Photo/Ron Jenkins) 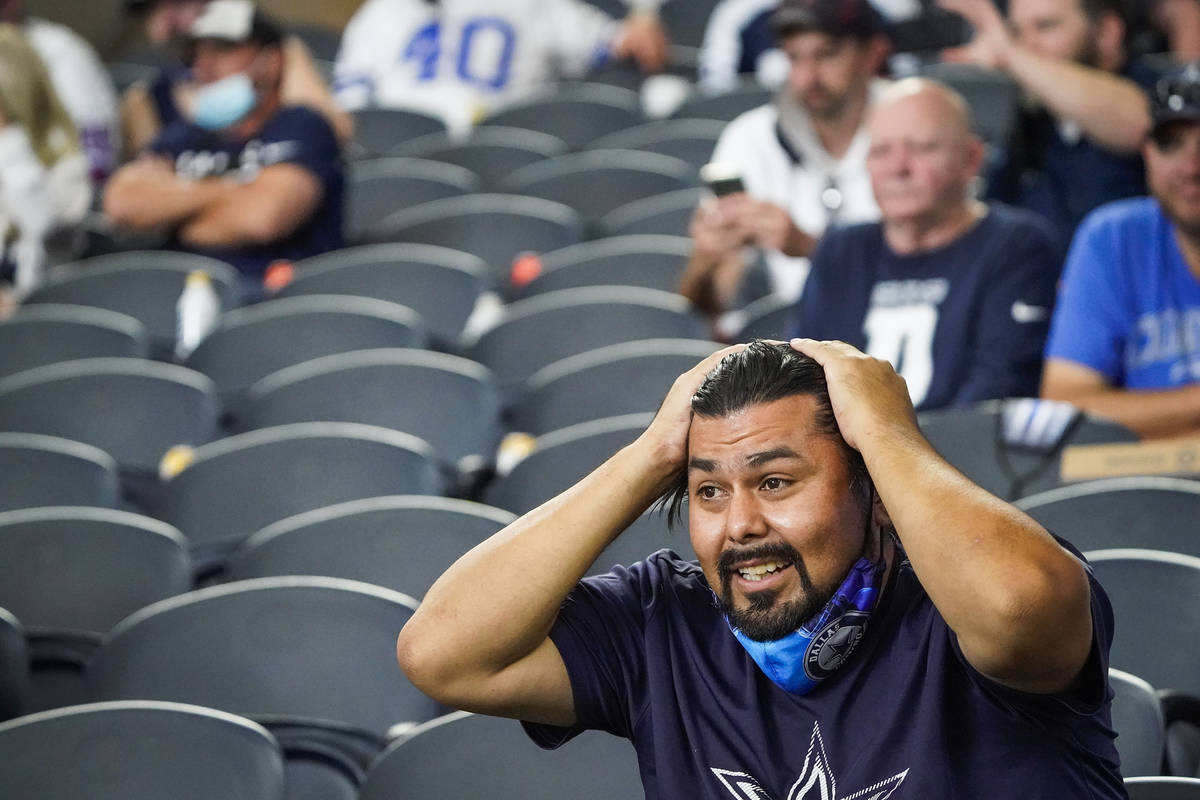 Dallas Cowboys fans Jamie Ramirez, of Amarillo, Texas, reacts after quarterback Dak Prescott was injured on a tackle by New York Giants cornerback Logan Ryan during the third quarter of an NFL football game on Sunday, Oct. 11, 2020, in Arlington. Prescott was injured o the play when Ryan came down on his right leg and left the game. (Smiley N. Pool/The Dallas Morning News via AP) 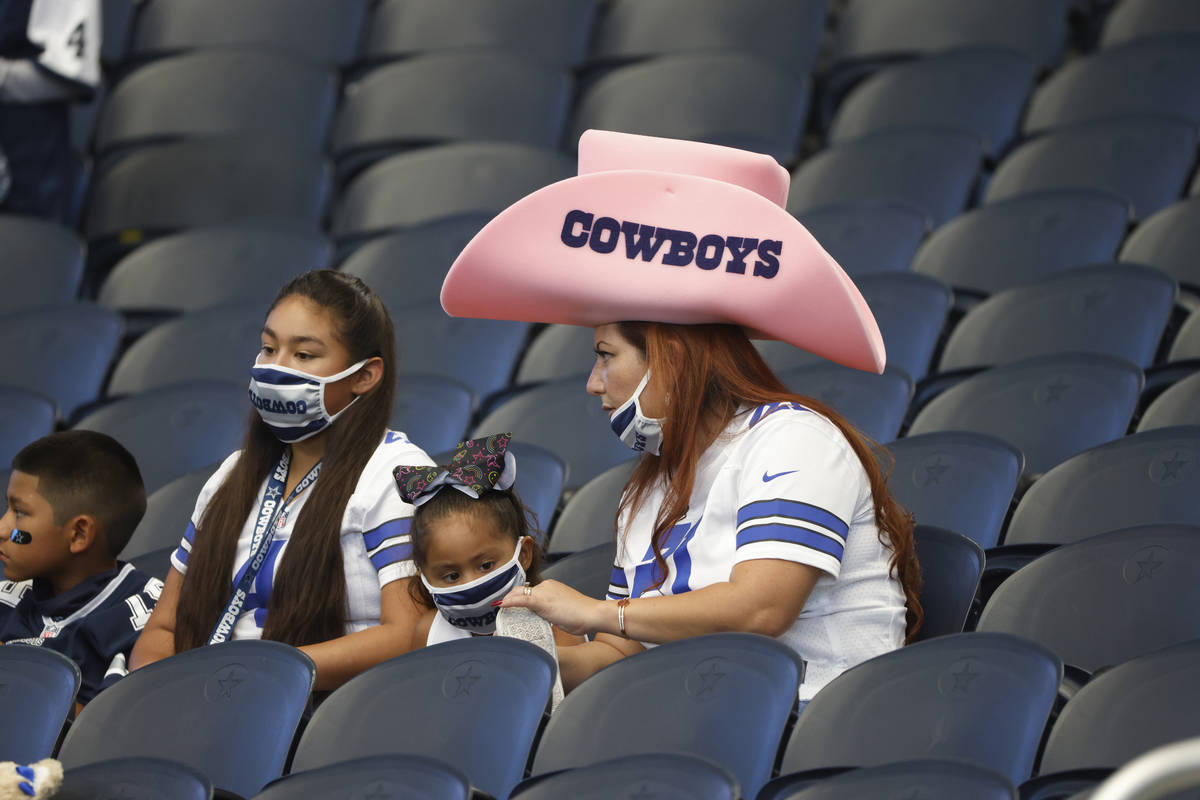 Fans wait for the start of a game between the Dallas Cowboys and the New York Giants in an NFL football game in Arlington, Texas, Sunday, Oct. 11, 2020. (AP Photo/Ron Jenkins) 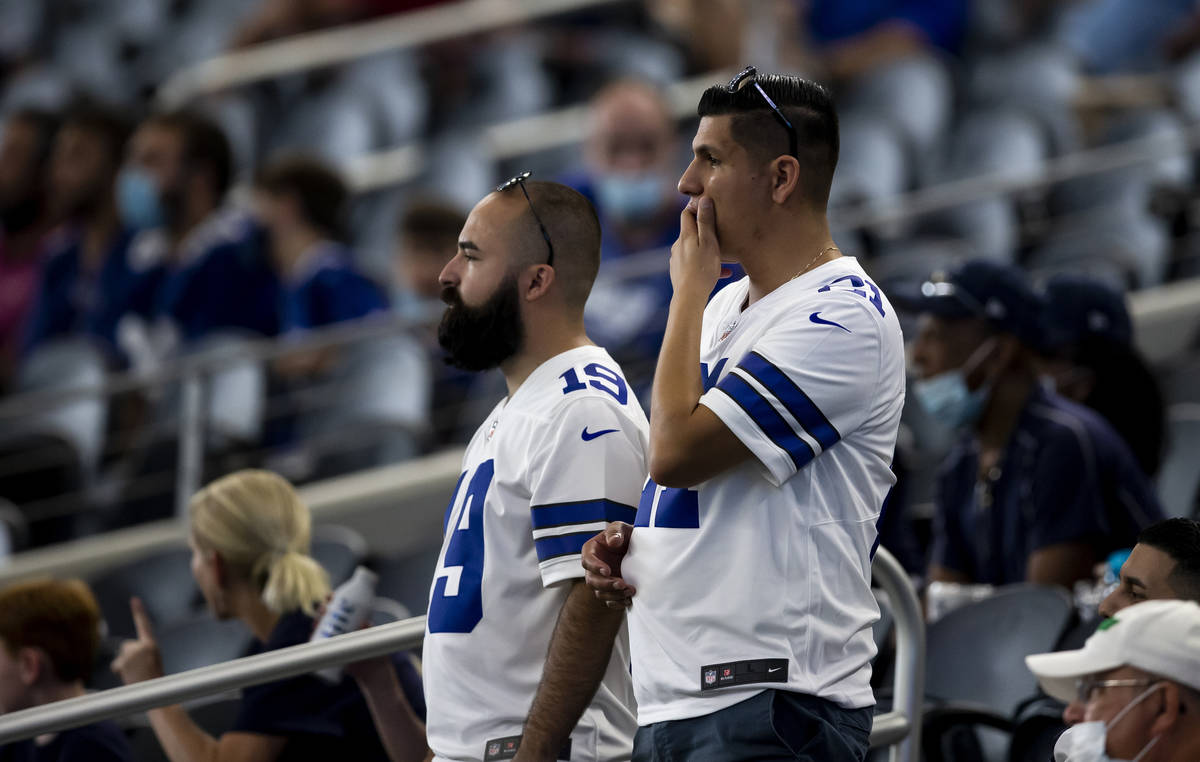 As Allegiant Stadium stands ready to be fanless for the entire NFL season, nearly half of the league’s 32 teams are set to allow people in the stands entering Week 6.

Nine of the 14 games this week will feature fans at a reduced capacity, according to the NFL, as 15 clubs are set to host spectators. The Philadelphia Eagles are the latest, announcing this week that they will host up to 7,500 fans at Lincoln Financial Field beginning Sunday.

“We believe we have been able to do that safely, and that’s what our data says,” Peter O’Reilly, the league’s executive vice president of club business and league events, said on a media call Wednesday. “Feedback from fans has been great.”

Through Week 5, 246,964 fans have attended games, according to data tracked by ESPN. The Dallas Cowboys have the highest attendance, with 71,876 fans total for their three games at AT&T Stadium in Arlington, Texas. To put that in perspective, it would not be enough fans to sell out the 80,000-seat capacity facility for a single game.

There have been no health-related issues tied to allowing fans in stadiums, as the NFL follows strict safety measures, set by working closely with league, team, state and local officials in each jurisdiction.

More fans, but not at Allegiant

“We have shared best practices from the clubs that have hosted fans safely and responsibly,” said Brian McCarthy, NFL spokesman. “We also engaged a company that tracked COVID cases in the local area in time periods before and after fans attending games.

“There’s been no indication that NFL games with fans are having an impact on daily COVID case trends at the local or state level.”

“We anticipate more cities coming online in the next few weeks, while stadiums that have hosted fans will increase their capacity as the season progresses,” McCarthy said.

Don’t expect one of those teams to be the Raiders in their first season in Las Vegas.

Team owner Mark Davis has been steadfast in his stance that if all 65,000 fans cannot attend games at the sold-out Allegiant Stadium then no fans will.

After making that statement ahead of the season, Davis has reiterated his stance several times, including this month.

He has opted to watch home games on television at the Raiders’ Henderson headquarters, about 11 miles from Allegiant Stadium.

“I took the approach that if no fans could be there, I wouldn’t either,” Davis said this month. “So, I still haven’t gotten to see a game inside the stadium.”

The Raiders, like other teams playing without fans, have piped in artificial crowd noise over the stadium speakers.

Last week’s win over the Kansas City Chiefs was the first time this season that the Raiders played in front of actual fans, with 13,311 showing up at Arrowhead Stadium, according to ESPN.

The increased energy in the stadium was noticeable. Amid all the red-clad Chiefs fans, Raiders quarterback Derek Carr spotted some Silver and Black supporters as well.

“I started hearing Raiders chants throughout the game for the first time. … It was awesome,” Carr said last week. “First time playing with fans. Obviously we miss our fans; I miss our fans.”

Carr is looking forward to playing in front of fans in Las Vegas for the first time, remarking on the unique atmosphere that Raiders fans bring.

“There’s nothing like a Raider home game; it’s just different,” Carr said after the game at Kansas City. “The rowdiness, the college atmosphere. But for some of our fans to travel out here … man, it was awesome to hear those Raiders chants going on in Arrowhead. It was pretty cool.”