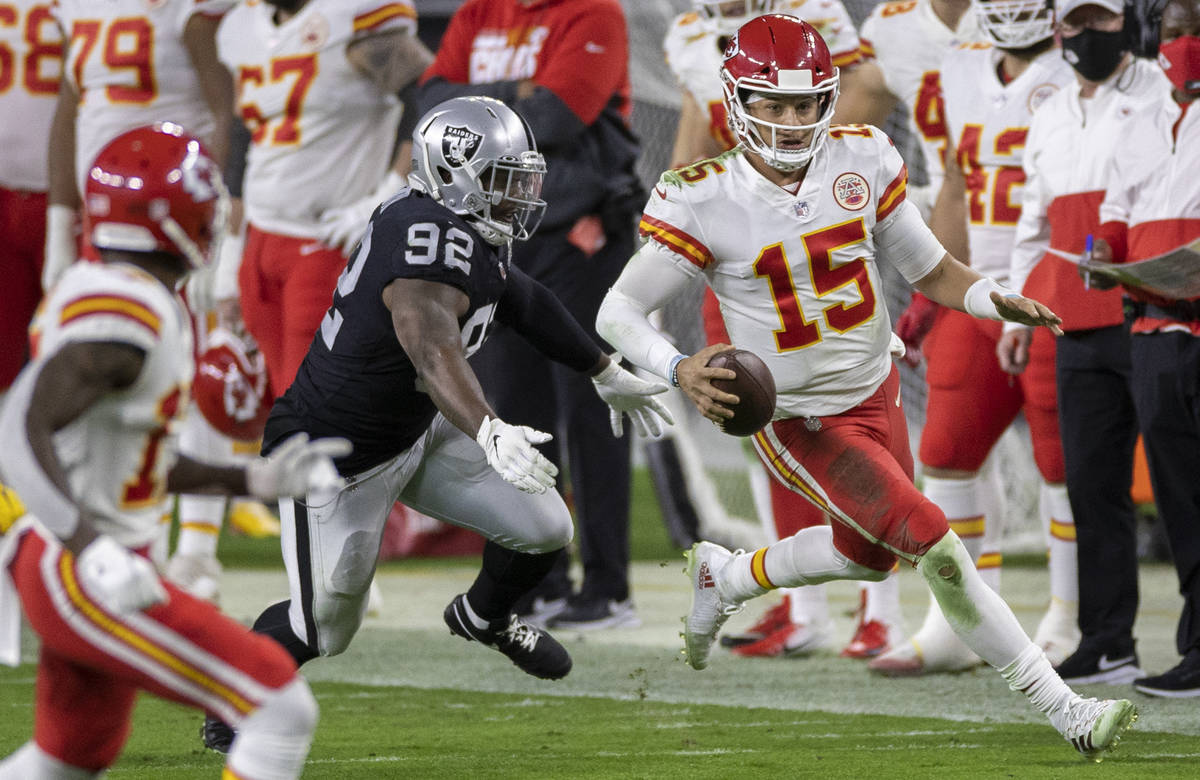 Chiefs coach Andy Reid didn’t blink Sunday night in the face of a 31-28 deficit against the rival Raiders, certainly not with 1:43 to play.

“I’ve got Pat Mahomes,” Reid said. “I know if you give me a minute and a half, I’m pretty good right there. … I thought we had enough time there to get rolling.”

Mahomes manufactured some more magic Sunday night at Allegiant Stadium, completing six of seven passes during Kansas City’s final drive and finding tight end Travis Kelce uncovered in the middle of the end zone for a 22-yard score with 28 seconds to play in a 35-31 victory.

The wunderkind quarterback also maintained his momentum in the quest for his second MVP by finishing 34 of 45 for 348 yards, two touchdowns — and making the spectacular seem all too routine.

“I’d take him over everybody, and I’m lucky to have him, as we are as a football team, as we are as a city,” Reid said of his 25-year-old superstar. “When you’re behind, he can make things happen … He’s got guys that believe in him around him and work like crazy to get themselves open.”

Mahomes was subpar by his extraordinary standards in the first meeting with the Raiders on Oct. 11 at Arrowhead Stadium, completing a season low 52.2 percent of his passes for 340 yards, two touchdowns and his first interception en route to Kansas City’s only loss, a 40-32 shootout.

But he hadn’t so much as struggled since, throwing 12 TDs and no interceptions in his last four games while posting a passer rating of 107.2 or better.

A rematch with the Raiders loomed large.

“There was no doubt that we wanted to win, and I think the guys came to play,” Mahomes said following his fifth successful fourth-quarter comeback. “They’ve beat a lot of good football teams, including us.”

Mahomes engineered a pair of TD drives in the first half and was vying for a third late in the second quarter, but he was intercepted near the goal line by Raiders cornerback Trayvon Mullen with 19 seconds left in first half, squandering a valuable scoring opportunity.

The Chiefs regrouped, though, and scored on the first drive of the second half to set up a rousing back-and-forth that spanned practically the entire second half. Raiders quarterback Derek Carr threw a TD to tight end Jason Witten with 1:43 to play in the fourth quarter to give the Raiders a 31-28 lead.

Kansas City running back Clyde Edwards-Helaire knew that was more than enough time.

“We have Patrick Mahomes. I’m not worried about anything,” said Edwards-Helaire, who rushed for 14 times for 69 yards and two scores.

Mahomes calmly completed a pair of passes to wide receiver Tyreek Hill to start the game-winning drive, then found Mecole Hardman with a 16-yard completion to the Raiders’ 40-yard line. He connected with Kelce for 15 yards and checked down to running back Darrel Williams for another 3 yards, prompting Reid to call timeout and set up the game-winning score.

“(Mahomes) kind of turns it up when it really matters the most,” Kelce said after catching eight passes for 127 yards.

Reid said Hill was the first option on the game’s most pivotal play, but Mahomes was flushed from the pocket and rolled to his right — allowing Kelce to break free and secure a crucial victory.

“The rivalry between the Raiders and the Chiefs I think is a great thing for football,” Reid said. “It’s great to be a part of it. I know that team is well coached, and I know they have great players.”

But the same can be said about the Chiefs, and they have Mahomes.