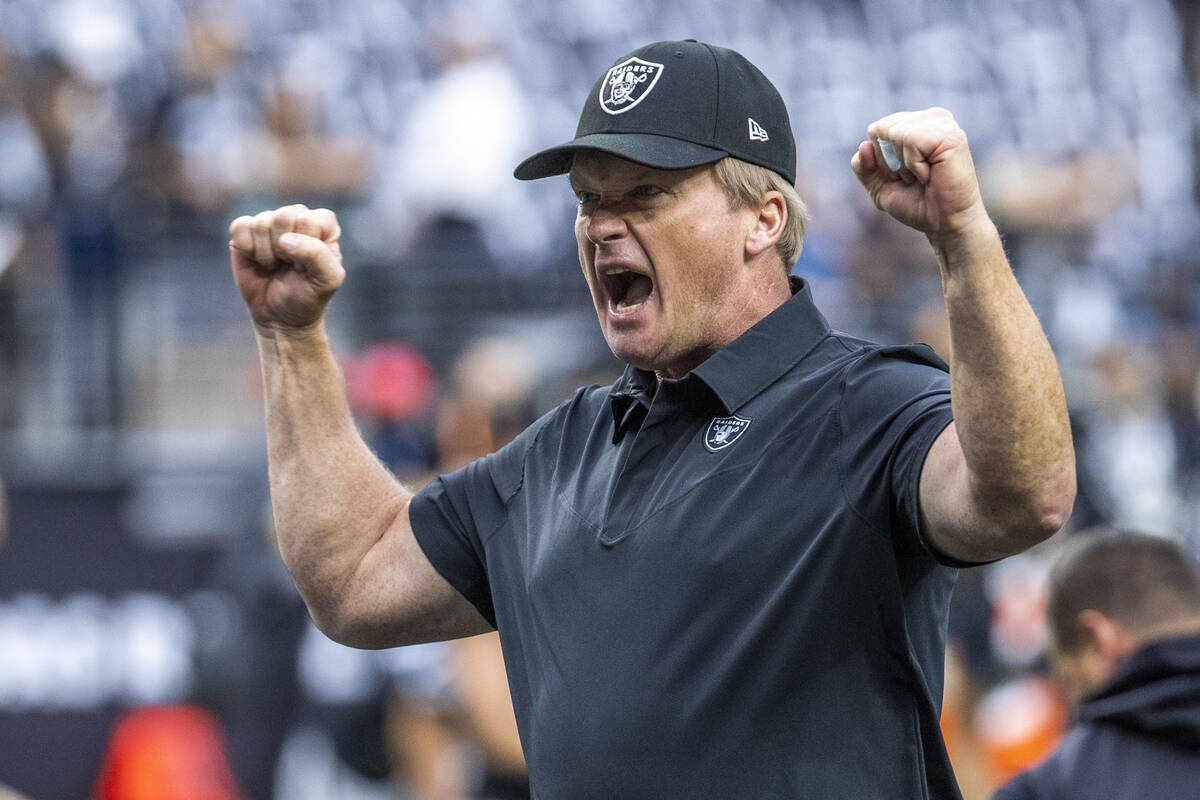 Raiders head coach Jon Gruden gets pumped up as the first half of their NFL game is set to begin versus the Miami Dolphins at Allegiant Stadium on Sunday, Sept. 26, 2021, in Las Vegas. (L.E. Baskow/Las Vegas Review-Journal) @Left_Eye_Images

It’s not like Jon Gruden needs any reminders about the physical and mental toll that coaching in the NFL can take on a human being.

His Raiders have already taken him on a roller coaster ride through three games this year, two of which went to overtime, and his three-plus seasons at the helm have included back-to-back years of extreme peaks and valleys.

So yes, Gruden knows better than most the ringer coaches go through on a week-to-week basis.

“No doubt,” Gruden said on Monday. “I will be the first to admit this is not an easy deal, emotionally.”

Nevertheless, Gruden and his coaching colleagues around the league got a bit of a wake-up call on Sunday when Kansas City Chiefs head coach Andy Reid took ill after Sunday’s game against the Los Angeles Chargers and was taken by ambulance to a local hospital.

Reid spent the night at the University of Kansas Health System and was reportedly treated for dehydration. He was released on Monday morning and was expected to return to work either late Monday or Tuesday morning.

Gruden and Reid were up-and-coming coaches together on the staff of the Green Bay Packers in the early 1990s and have remained close friends over the ensuing years. Gruden said on Monday he was in contact with Reid Sunday night and was relieved to hear he was sent home Monday morning.

As for his own situation, the Raiders have started the season 3-0 for the first time since 2002. In the process, they are the first team in NFL history to start a year with three straight wins while playing teams that won 10 or more games the year before.

That is the good news.

On the other hand, they’ve been extended to overtime twice this year in games in which they fell into early 14-0 holes. Both deficits were more the result of unforced errors rather than a talent deficiency. And in the case of Sunday’s 31-28 win over the Miami Dolphins, the Raiders surrendered an 11-point lead in the fourth quarter.

The point being, they have hardly been perfect. “We make things awfully difficult sometimes,” Gruden said.

And that can take a little something out on the guy on the sidelines.

“I’m just glad I have so much poise and I’m so laid back,” Gruden said.

The sarcasm was obvious.

Nevertheless, no matter how excruciating a journey the Raiders have taken to get to this point, Gruden isn’t about to apologize.

“I’m always going to be excited about a win,” he said. “It’s a hard league. When you go play Baltimore, you go play at Pittsburgh and you play the Miami Dolphins coming off a tough loss, it’s tough.”

The trick now is evening things out a bit more. In all three wins, the Raiders have flashed periods in which they were unquestionably the superior team. The problem is, they have also had stretches when they are their own worst enemy.

Help could be on the way in that regard. Gruden said on Monday that Josh Jacobs, who has missed the last two games with an ankle injury, is expected to practice this week and could return on Monday against the Los Angeles Chargers.

In addition, there is an expectation that running back Jalen Richard, who has been on the injured reserve list since the beginning of the season, could be back this week as well.