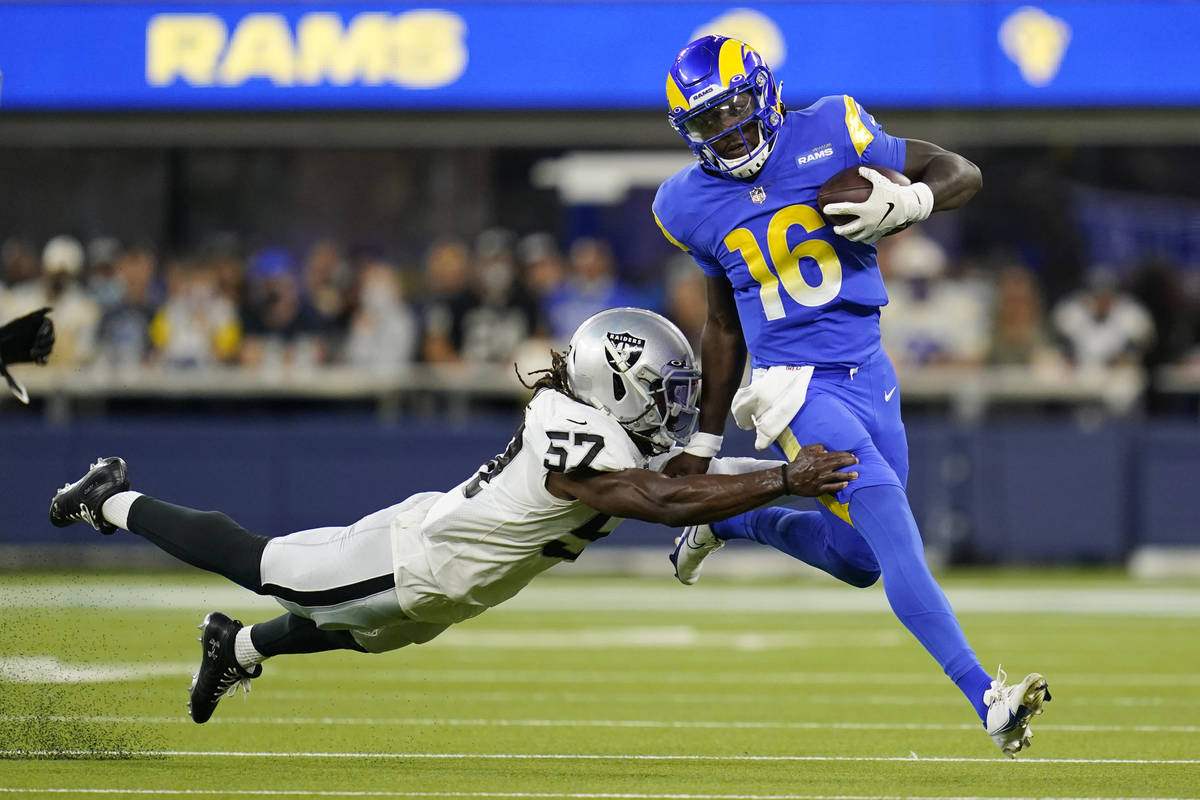 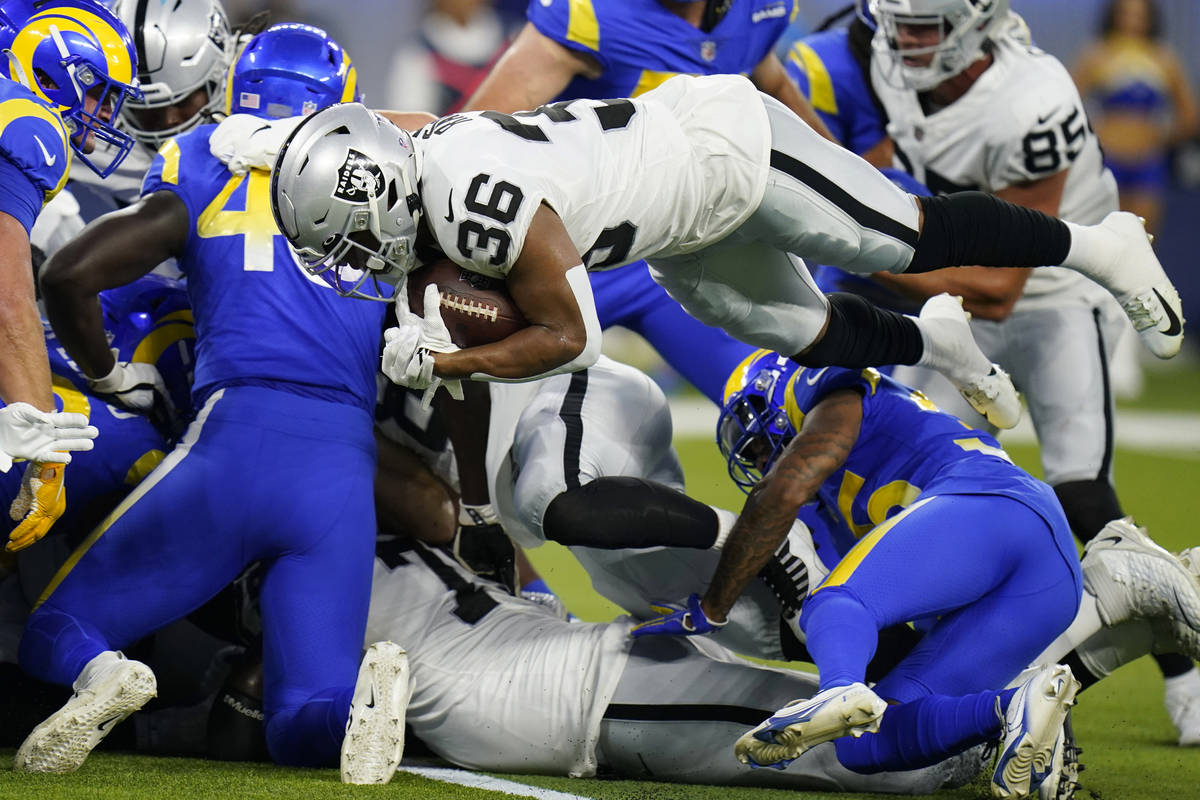 Las Vegas Raiders running back Trey Ragas lunges into the end zone for a rushing touchdown during the first half of the team's preseason NFL football game against the Los Angeles Rams on Saturday, Aug. 21, 2021, in Inglewood, Calif. (AP Photo/Jae C. Hong) 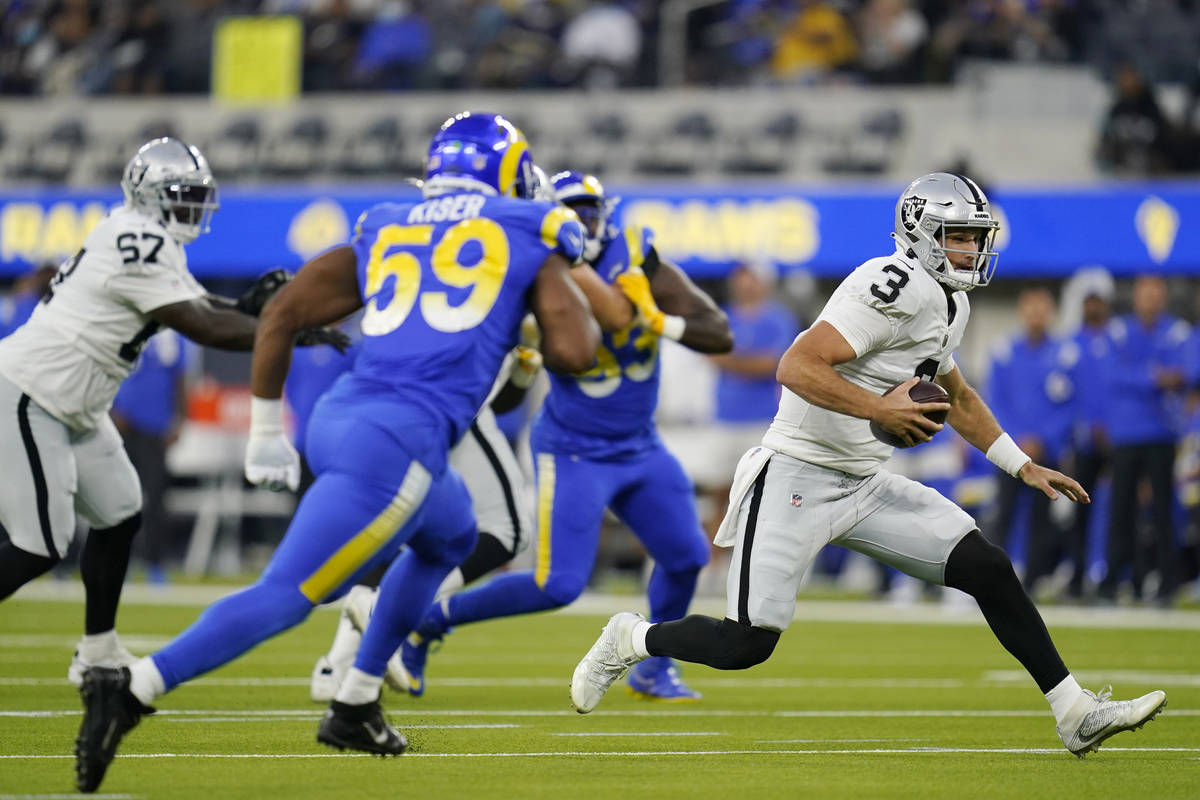 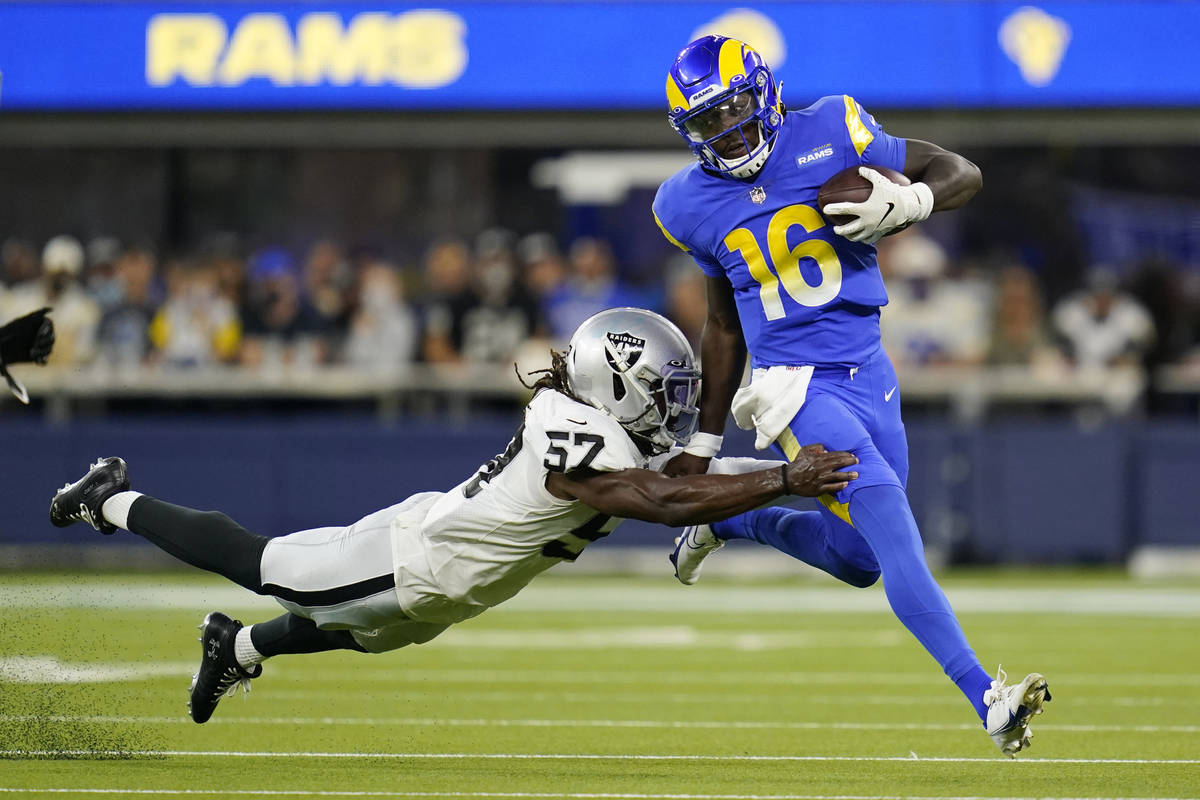 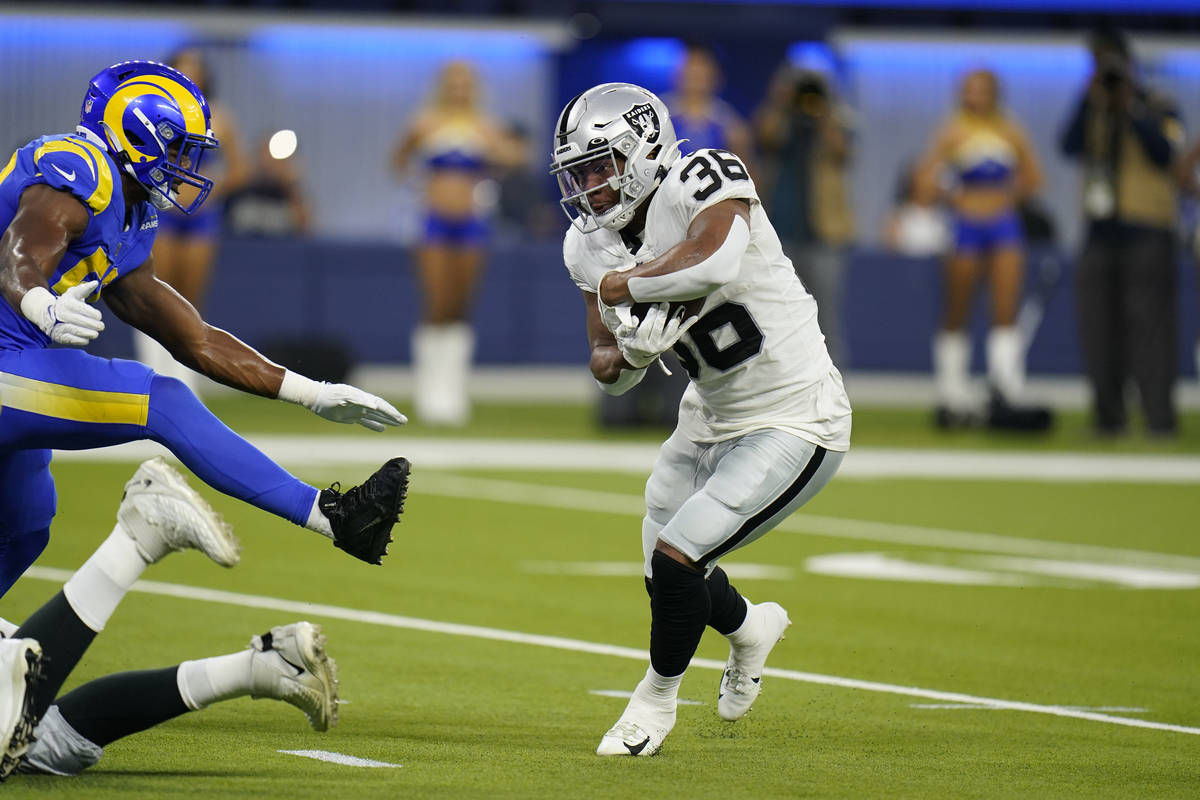 Las Vegas Raiders running back Trey Ragas runs for a touchdown during the first half of a preseason NFL football game against the Los Angeles Rams Saturday, Aug. 21, 2021, in Inglewood, Calif. (AP Photo/Jae C. Hong) 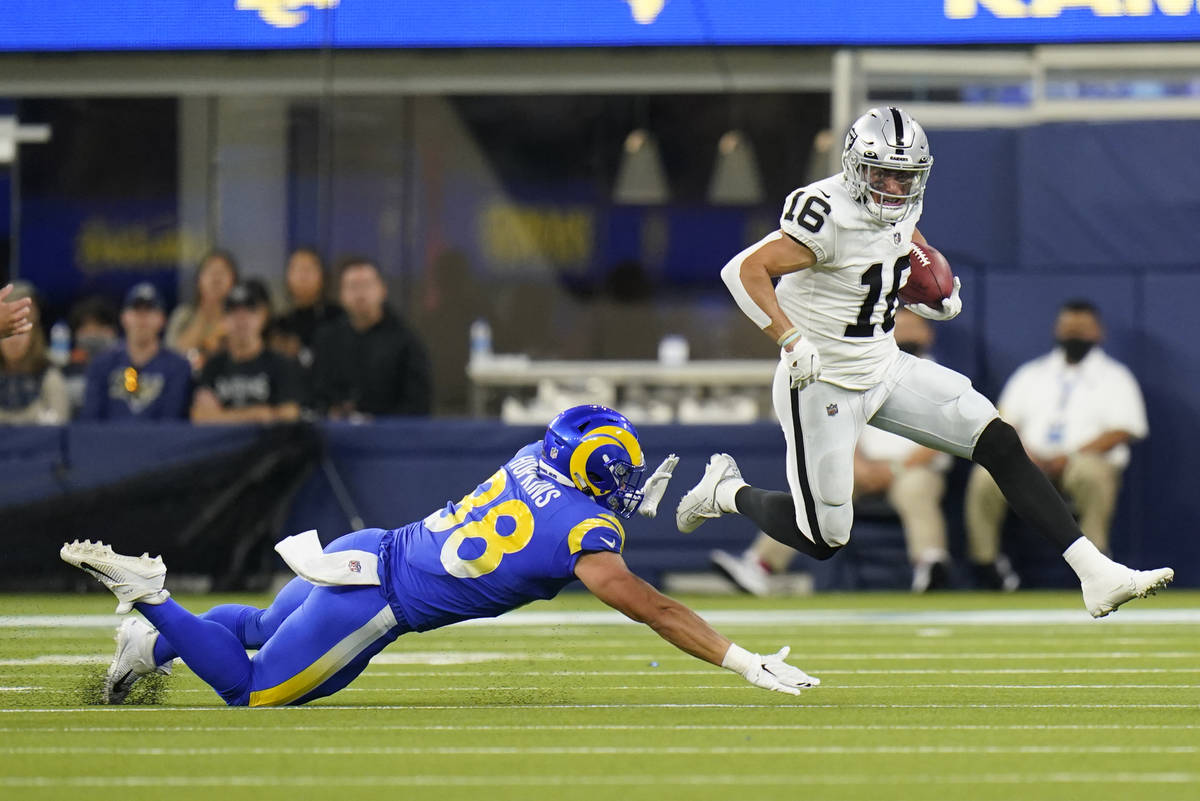 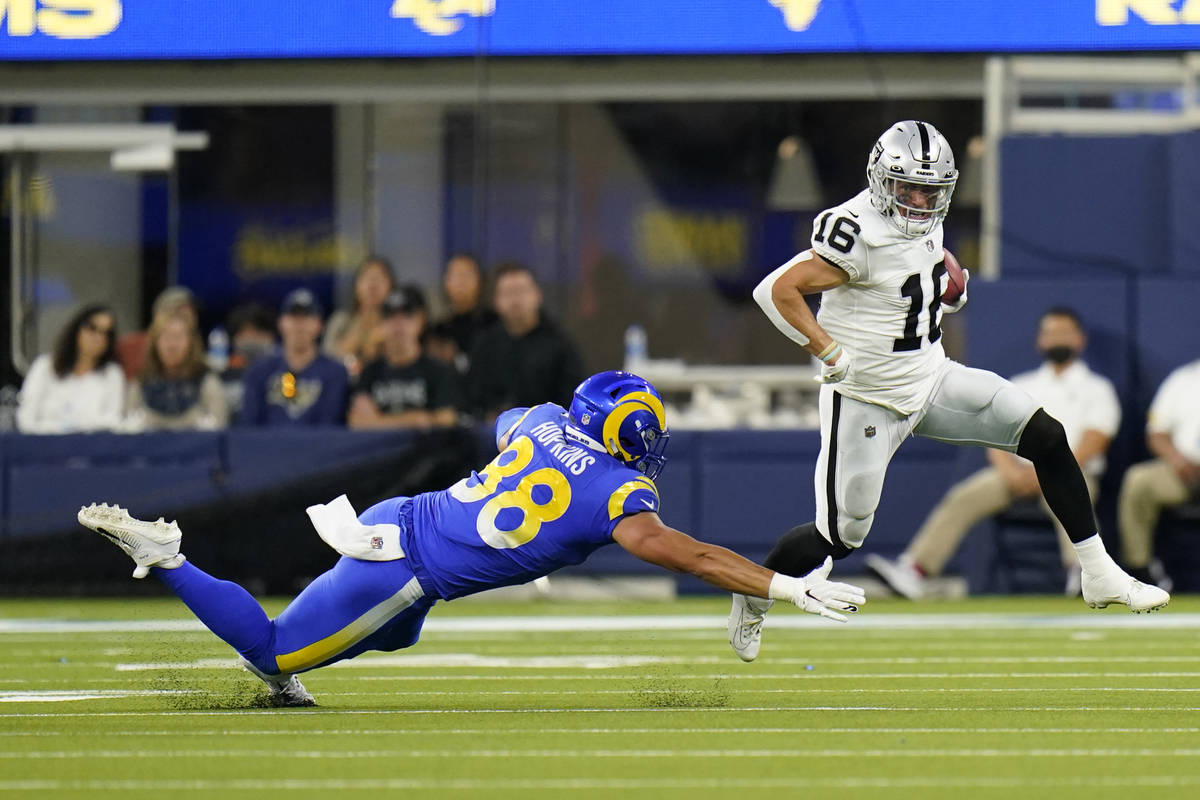 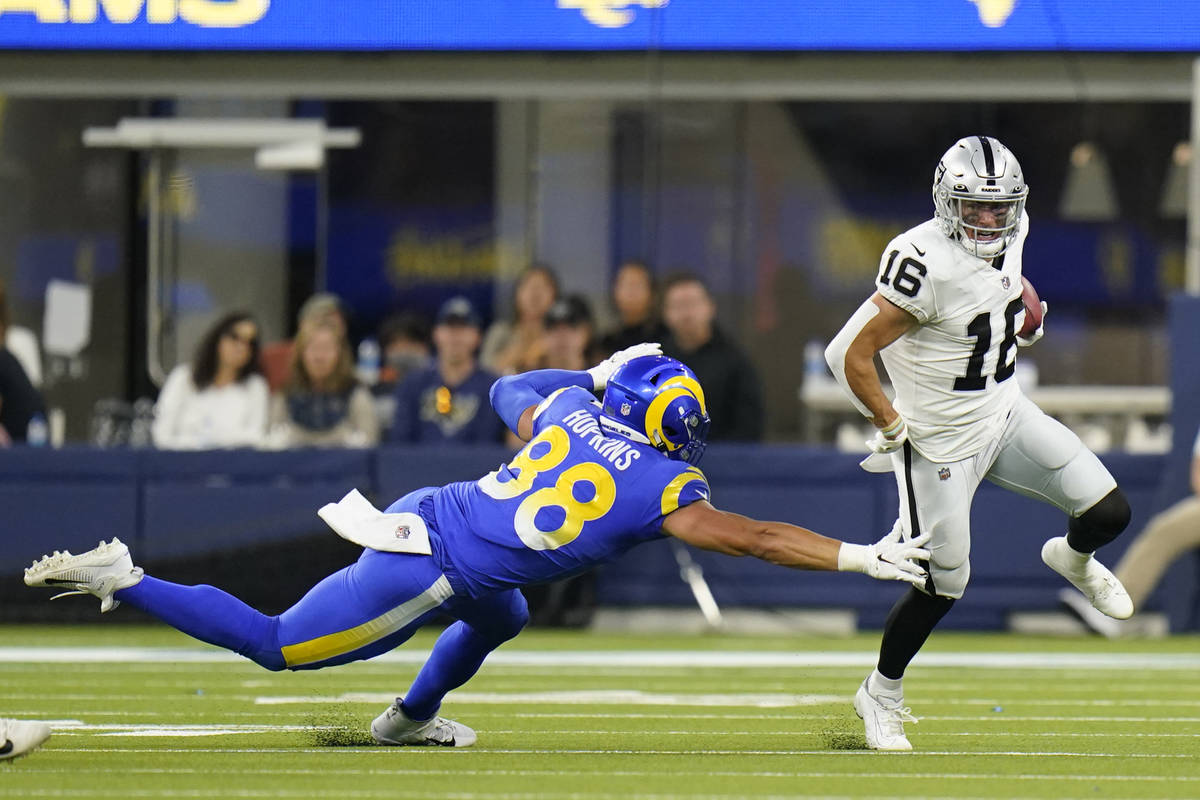 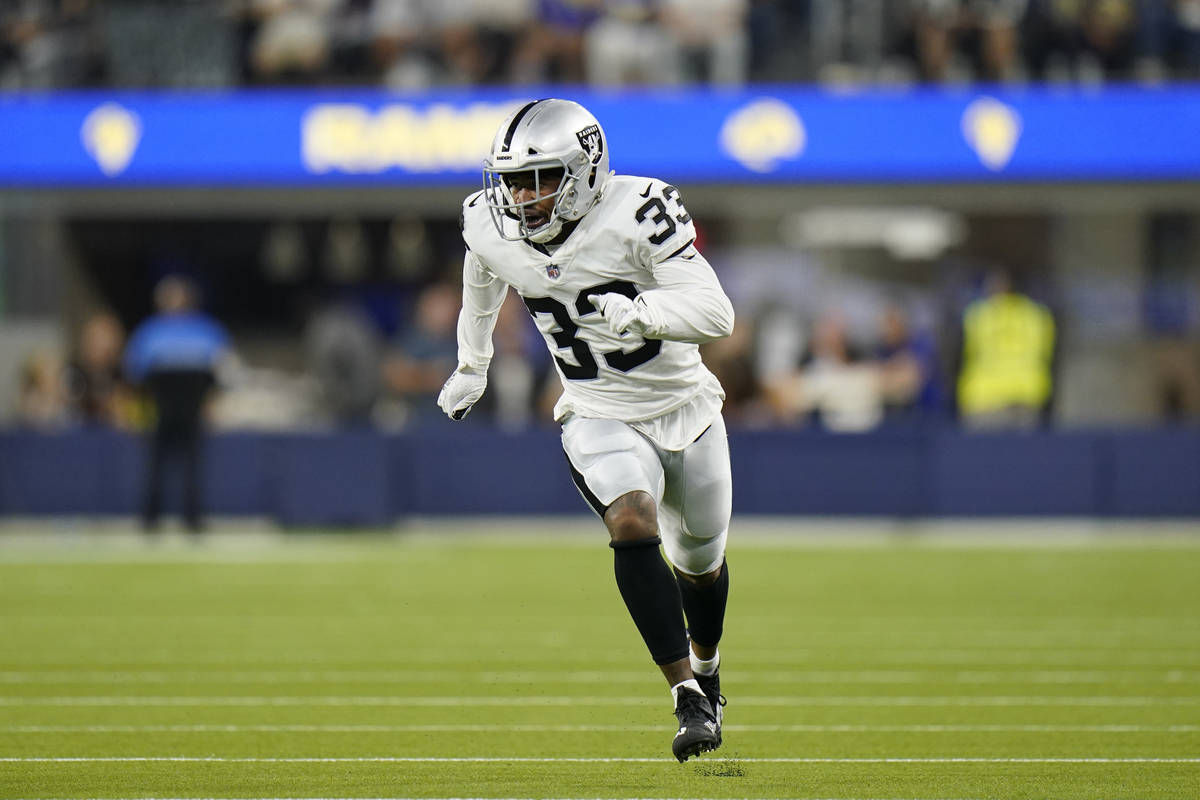 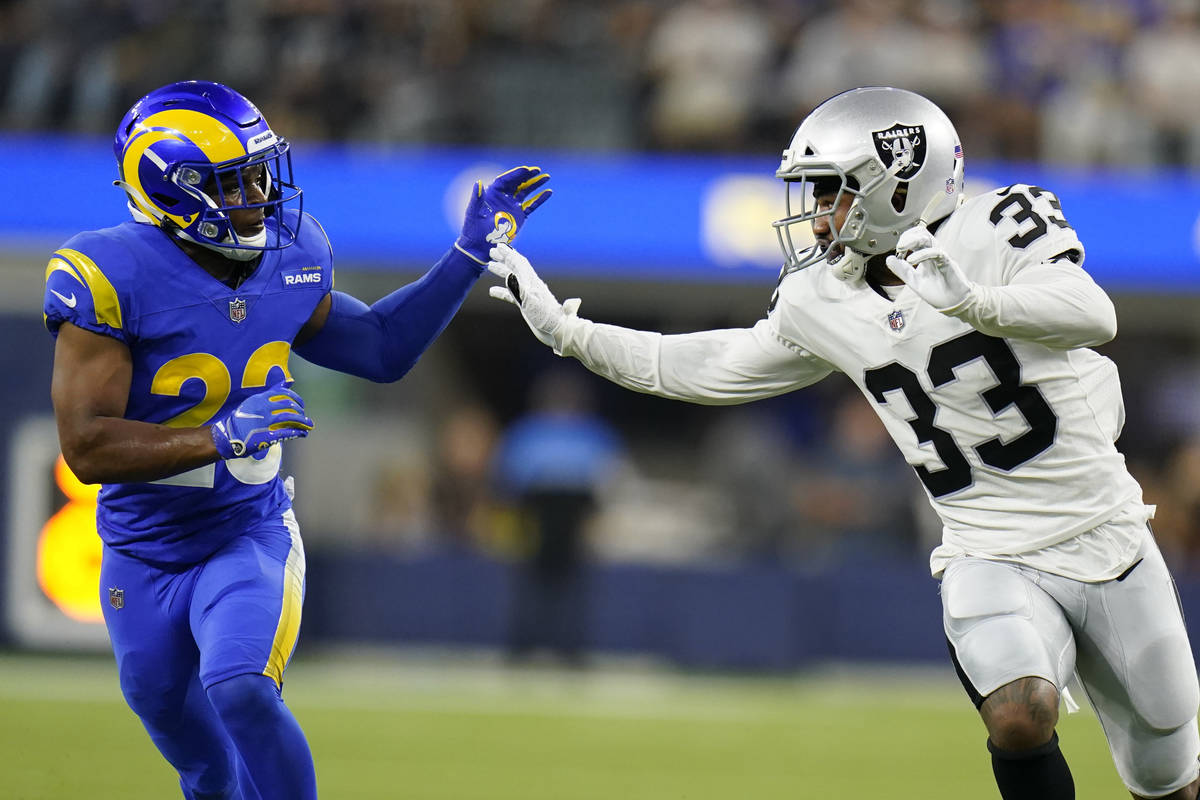 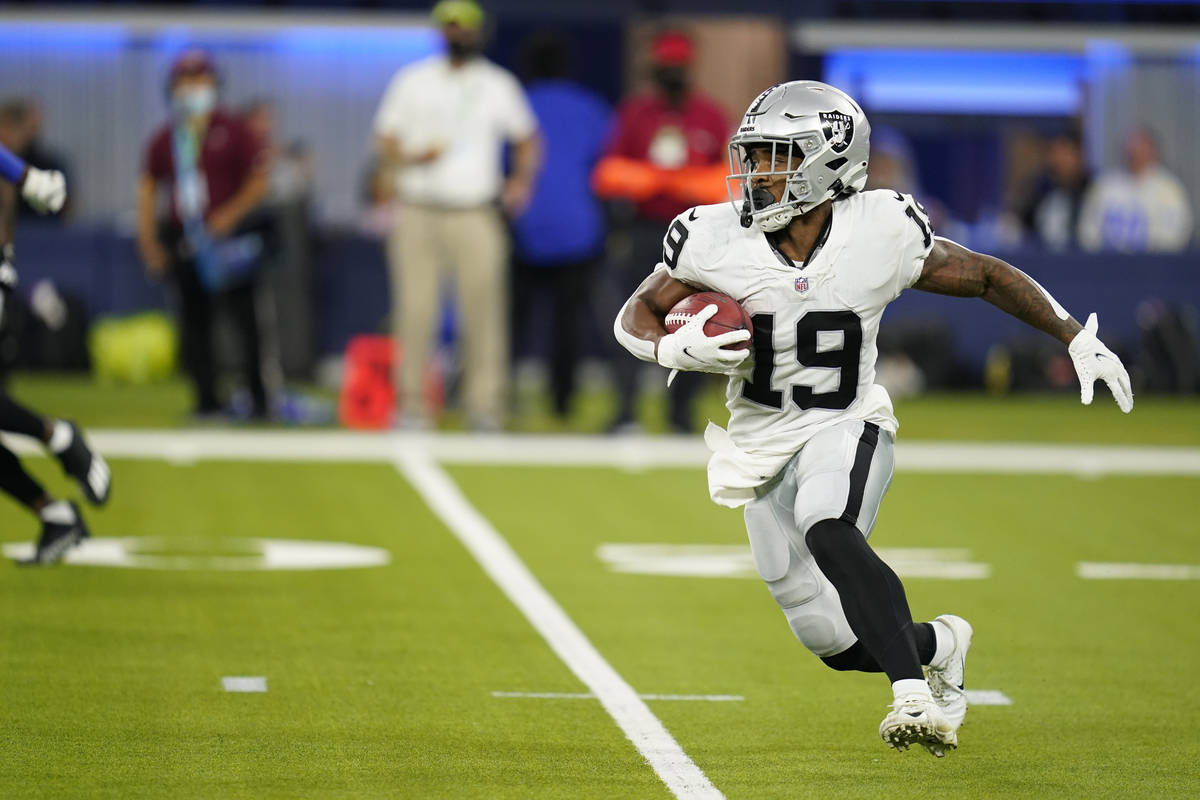 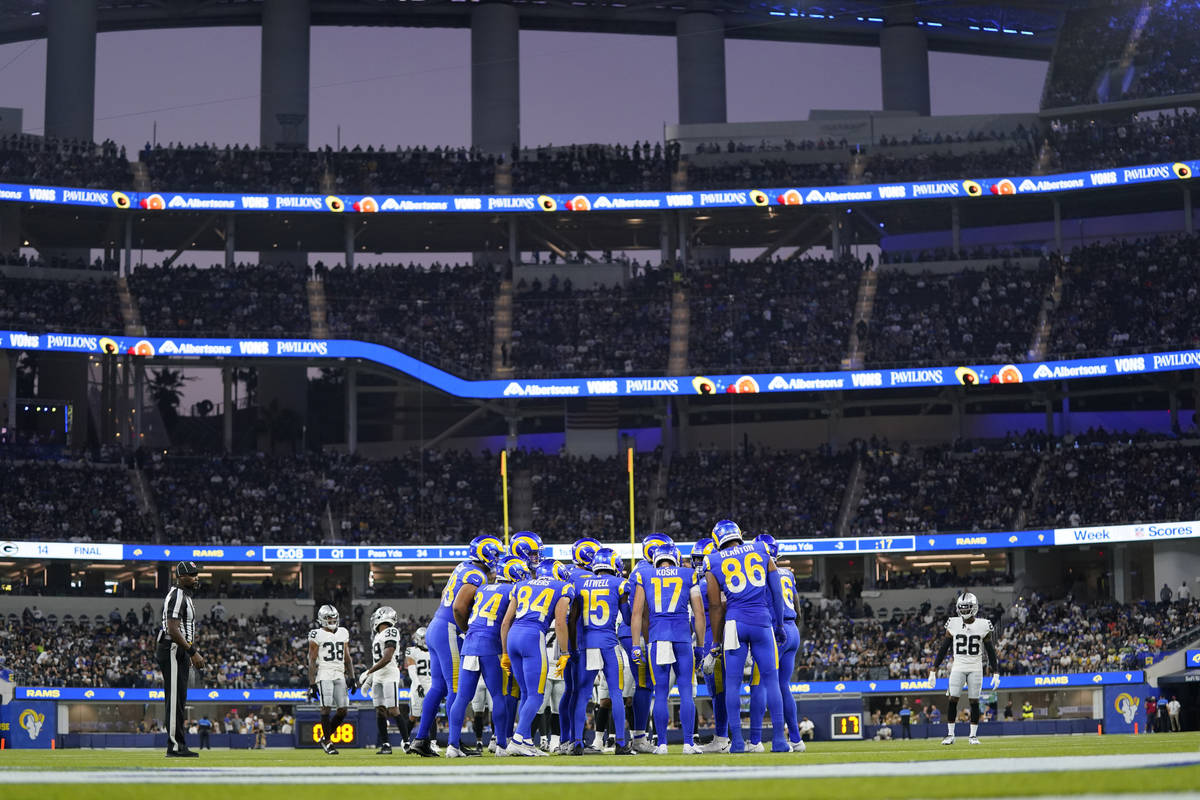 The Los Angeles Rams huddle during the first half of a preseason NFL football game against the Las Vegas Raiders Saturday, Aug. 21, 2021, in Inglewood, Calif. (AP Photo/Jae C. Hong) 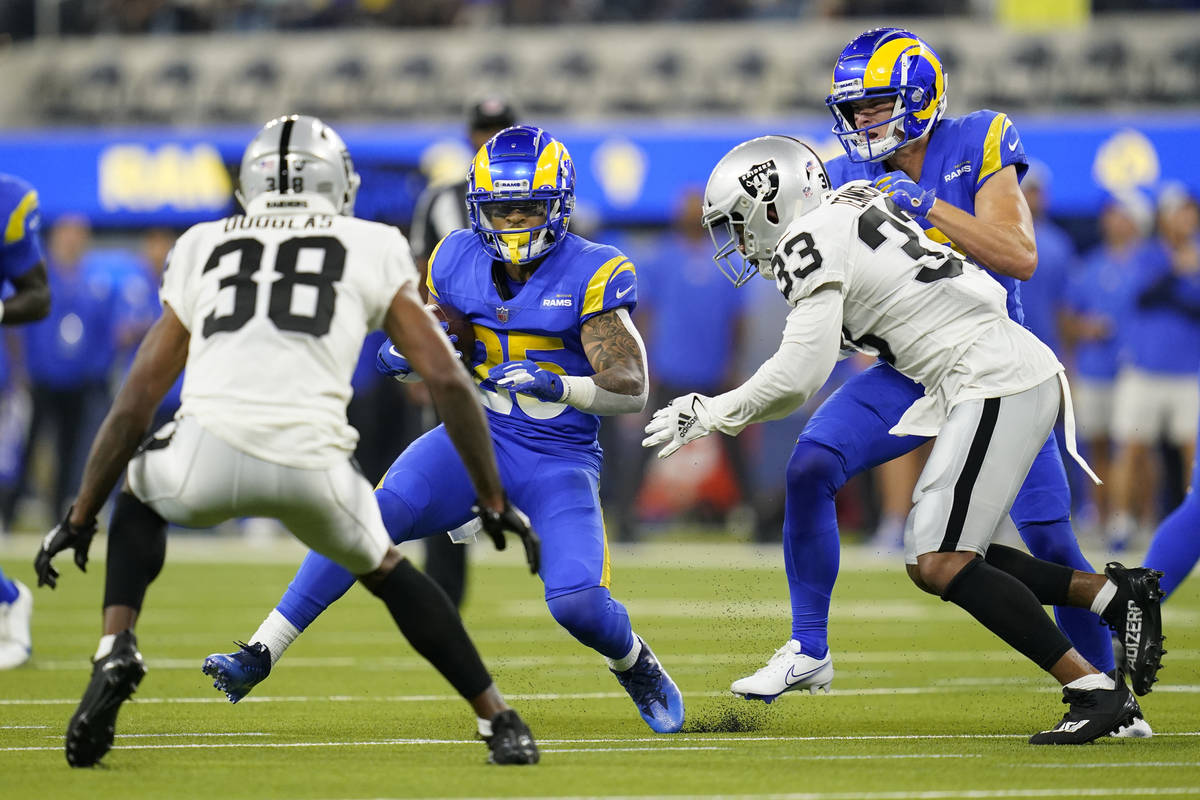 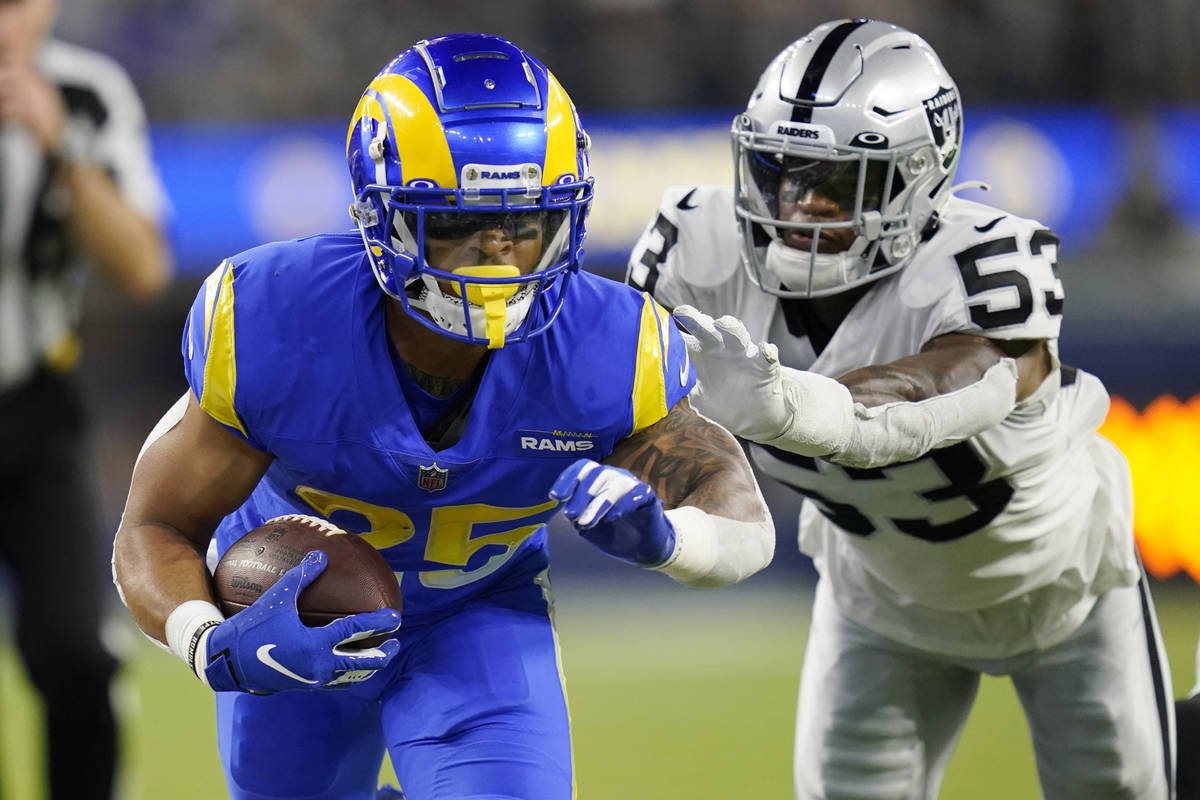 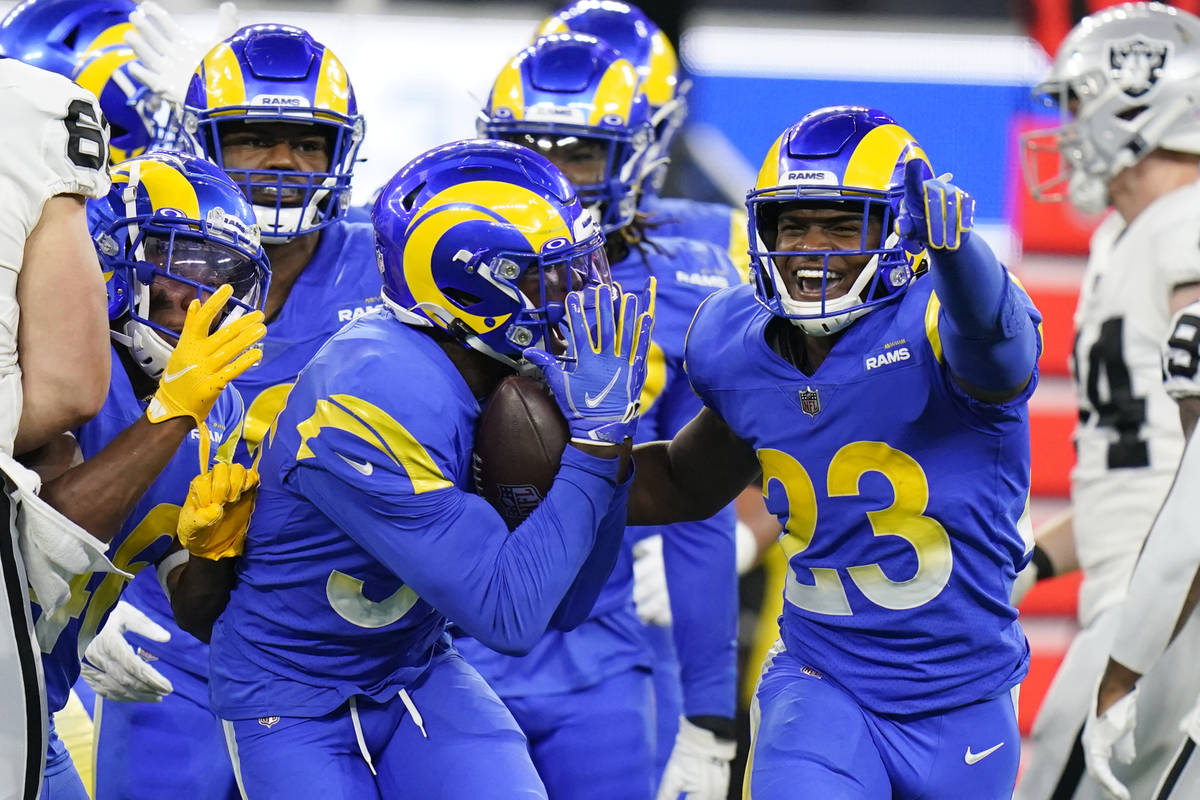 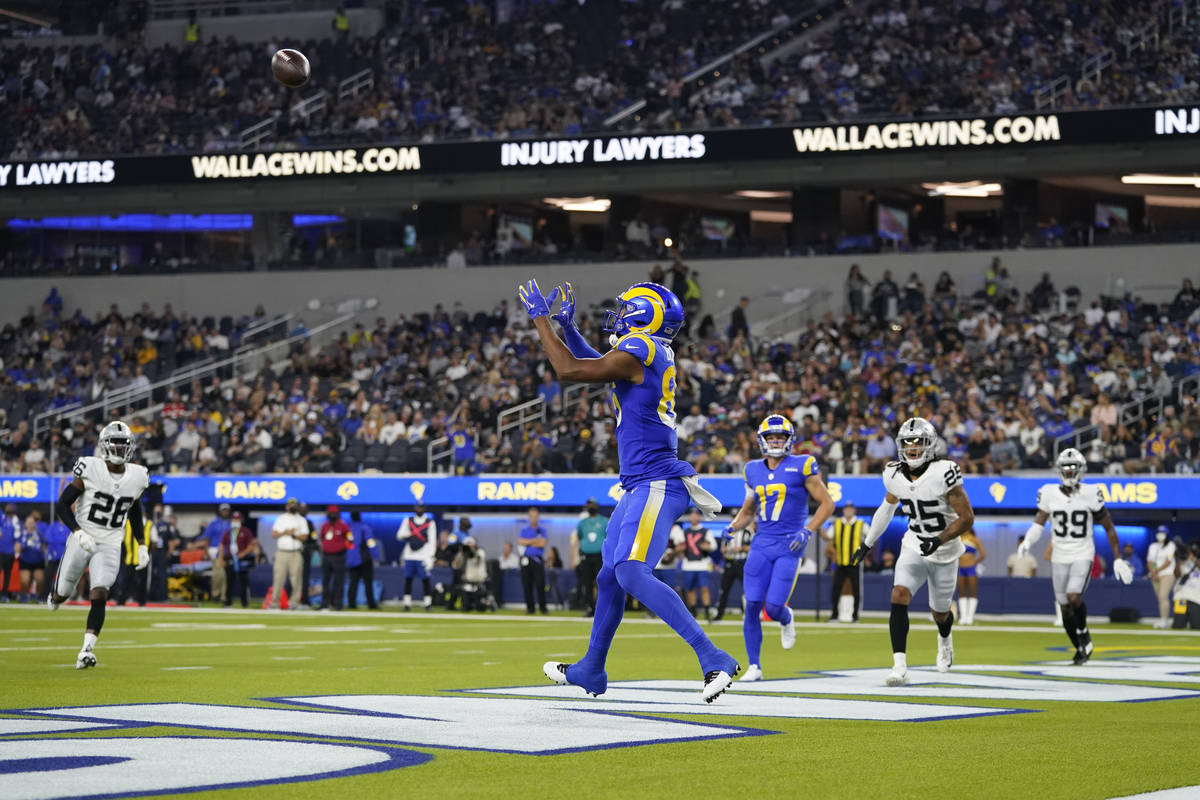 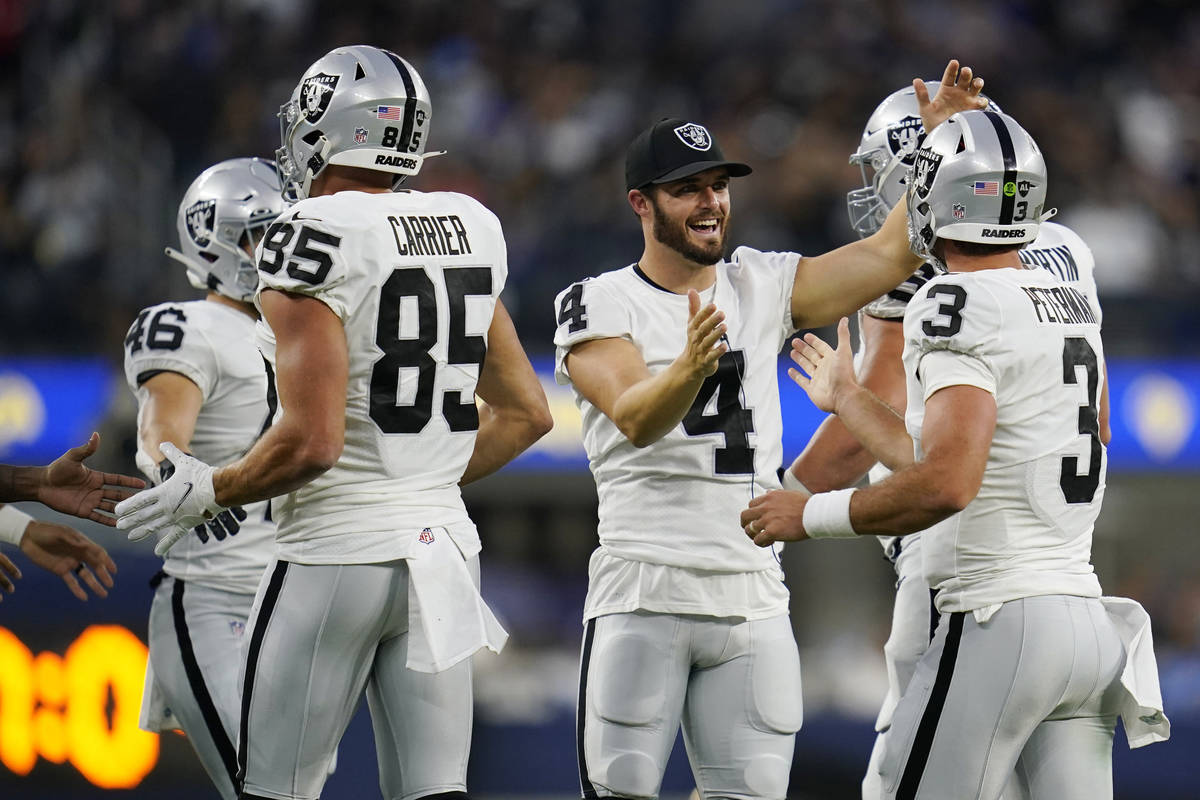 Las Vegas Raiders quarterback Derek Carr (4) celebrates with quarterback Nathan Peterman (3) after a rushing touchdown by Trey Ragas (not shown) during the first half of a preseason NFL football game against the Los Angeles Rams, Saturday, Aug. 21, 2021, in Inglewood, Calif. (AP Photo/Ashley Landis) 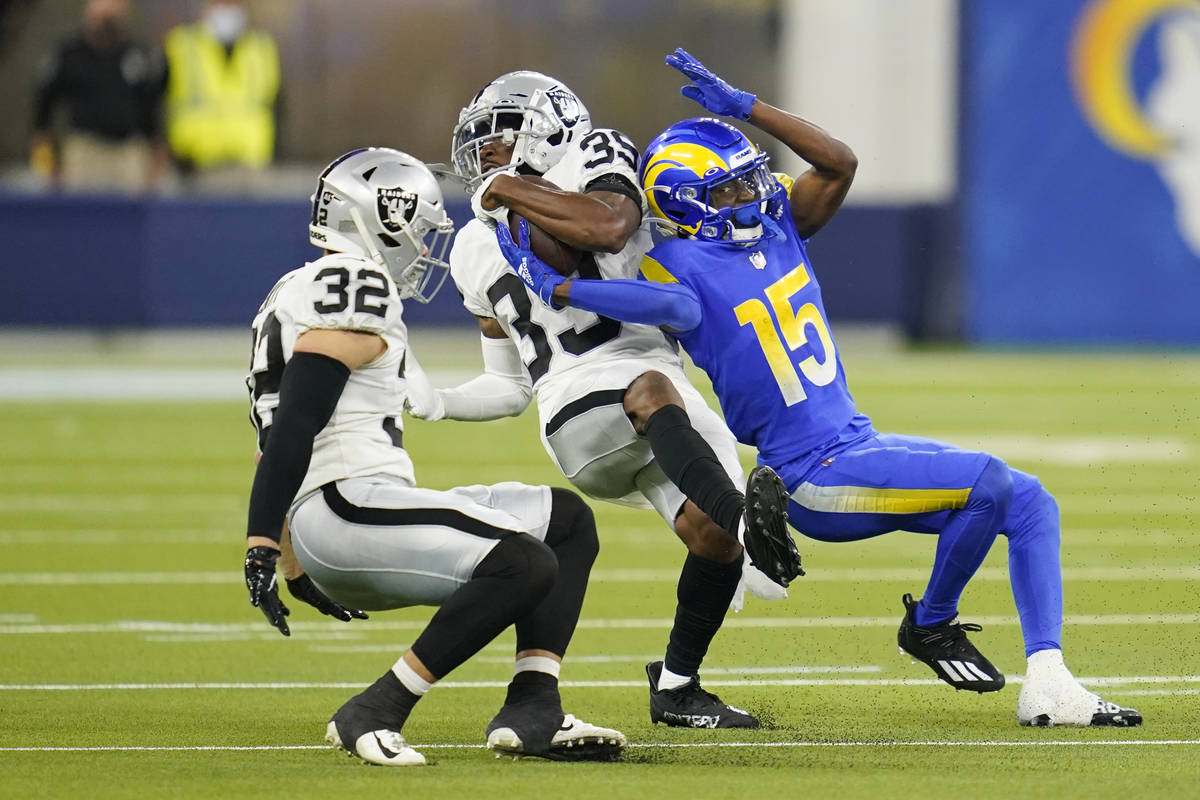 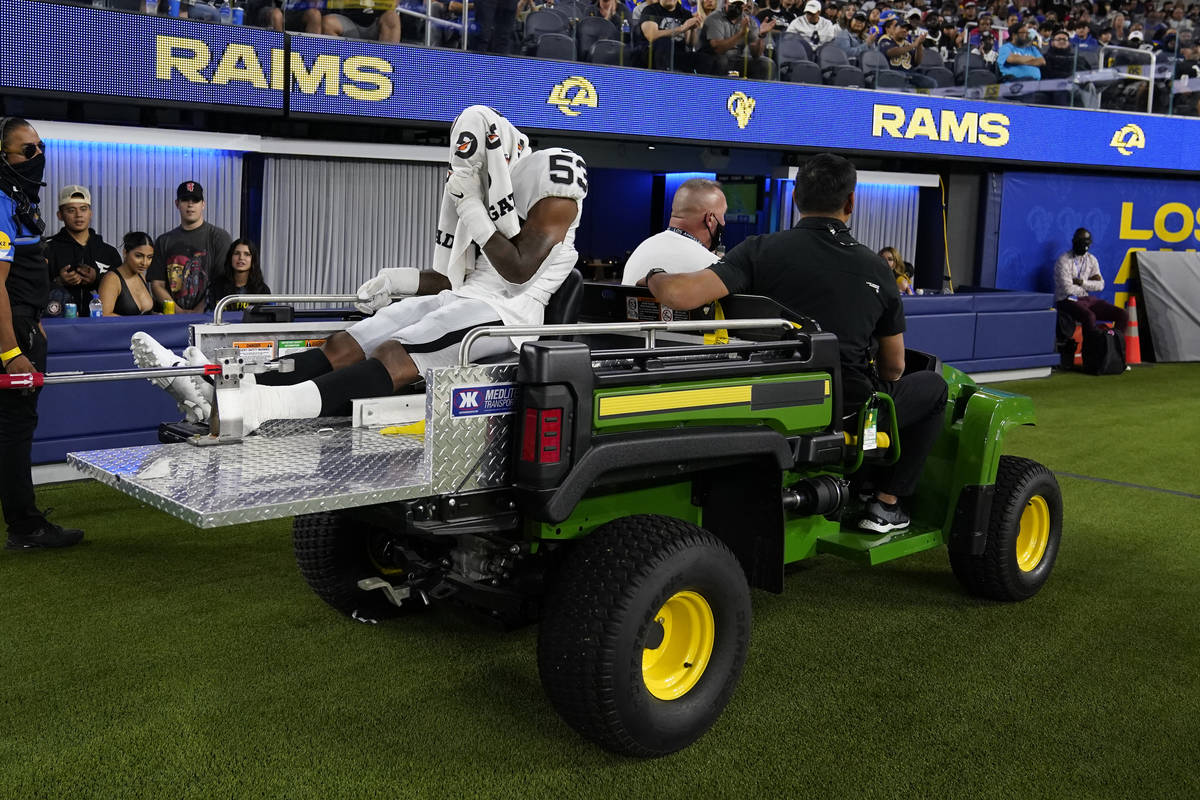 Las Vegas Raiders linebacker Javin White (53) is carted off the field after an injury during the second half of a preseason NFL football game against the Los Angeles Rams Saturday, Aug. 21, 2021, in Inglewood, Calif. (AP Photo/Ashley Landis) 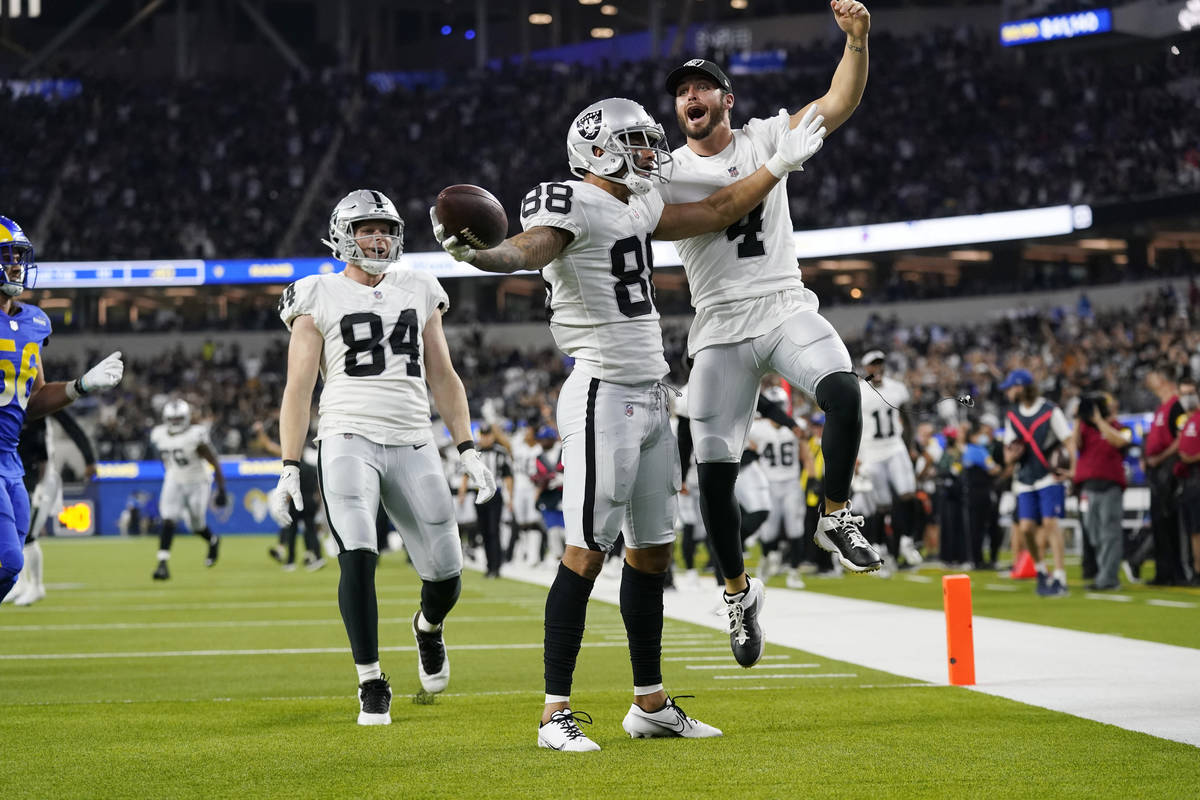 INGLEWOOD, Calif. — The Raiders defeated the Los Angeles Rams 17-16 on Saturday in their second preseason game when Rams quarterback Bryce Perkins missed on a pass for a two-point conversion with 15 seconds left.

For the Raiders (2-0), the result took a backseat to another day of injuries to a position already pushed to its depth limit.

Second-year linebacker Javin White, who is having a strong training camp and was in the process of putting together a second straight impressive preseason game, went down with a knee injury in which he needed the assistance of two teammates to make his way to the sideline.

White, a UNLV product, was immediately transported to the locker room via a cart, and a slew of teammates circled him to offer support before leaving the sideline.

The injury further depletes a thin Raiders linebacker corps, which already lost starter Nicholas Morrow on Thursday to a leg injury in a joint practice with the Rams. Meanwhile, Nick Kwiatkoski was injured last week against the Seattle Seahawks and missed all week of practice.

On the same play that White went down in the third quarter, rookie rush end Malcolm Koonce also was injured. Koonce, though, returned to action.

The White injury could not have happened at a worse time, as he was not only pushing for a spot on the 53-man roster but potentially a role in the rotation.

With three linebackers going down in the span of seven days, the Raiders could revisit free agent linebacker K.J. Wright, the longtime Seattle Seahawks standout who was in for a free-agent visit two weeks ago.

Wright left the Raiders’ training facility without a contract, but the dynamics clearly have changed since his visit.

Here are two other takeaways.

The Raiders may have uncovered a gem in rookie cornerback Nate Hobbs, who has impressed throughout training camp and carried the momentum through the first two preseason games.

Hobbs plays with an instinctual edge not often seen in such a young player, and certainly not in a player who lasted until the fifth round of the draft.

But almost from the moment he set foot in the Raiders’ facility, he has caught the eye of teammates and coaches. And his first two NFL preseason games have been an impressive display of command of the slot cornerback position in both pass defense, run support and rushing the passer.

On the Rams’ third play, Perkins threw to his right, to J.J. Koski, who was standing near the line of scrimmage hoping to catch the Raiders and Hobbs out of position on a quick screen. But Hobbs never lost his composure or sight of Koski. Immediately after Koski caught the ball, Hobbs converged on him and drove him back for a 4-yard loss.

Later in the first quarter, Hobbs cleverly disguised a corner blitz to confuse the right side of the offensive line, then burst into the backfield to nearly come up with his second sack of the preseason. Perkins was able to break free of Hobbs, but the damage was already done. Perkins scrambled to his left before throwing the ball away.

Hobbs’ best play, though, came in the third quarter when he ran stride for stride with Rams wide receiver Tutu Atwell on a deep post, then went up and over Atwell to come up with an impressive interception. Hobbs not only made a great play on the ball, then went to the highest point to grab it, but he maintained possession upon falling.

Alex Leatherwood, the Raiders’ first-round pick from Alabama, was mostly solid in his first preseason game last week, although there were a couple of missed assignments and some fundamentals that needed to be cleaned up.

The 17th overall pick in the draft was much better in his second game, particularly on the second drive when he successfully protected Nathan Peterman in pass protection while being physical in run blocking. The Raiders fed off their rookie’s intensity, running to his side for positive yards during an eight-play scoring drive.

The Raiders opted to sideline their four other starting offensive linemen. Richie Incognito was a no-go because of a leg injury he sustained Thursday during a joint practice with the Rams, leaving Leatherwood the only starter to play on Saturday.