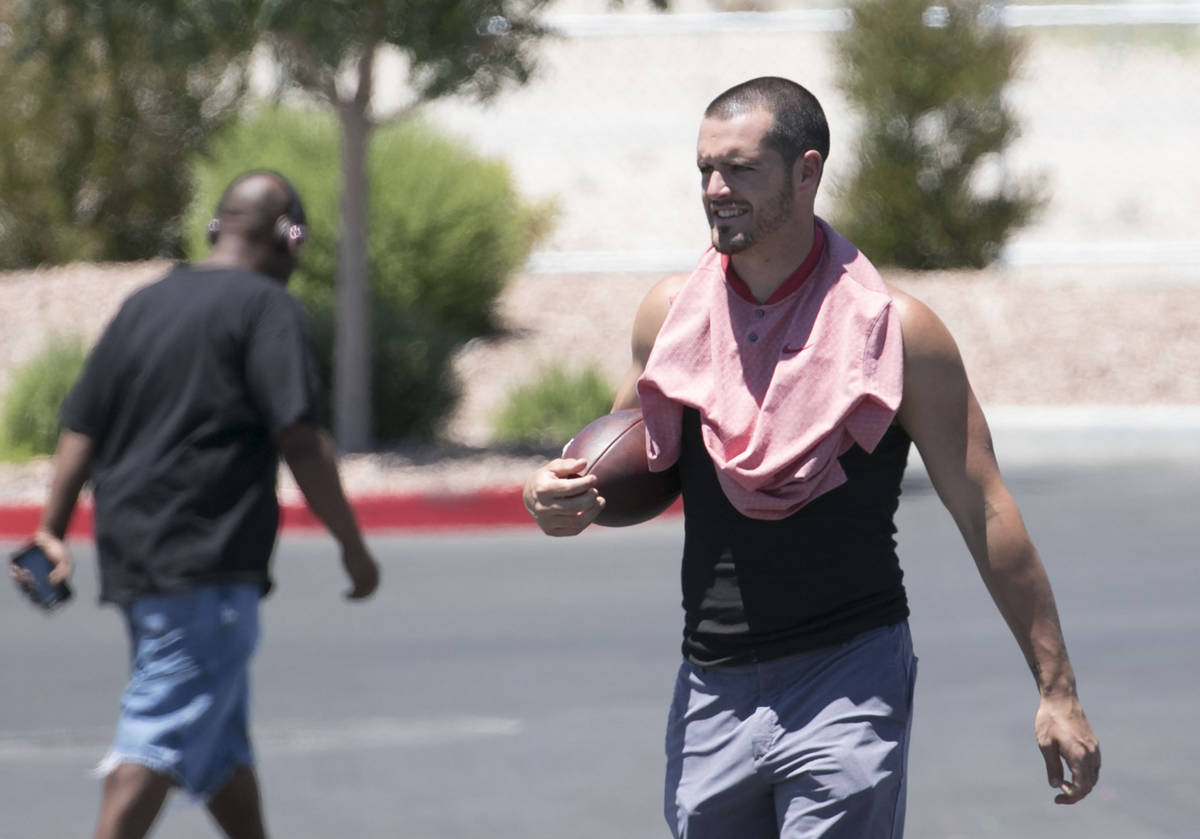 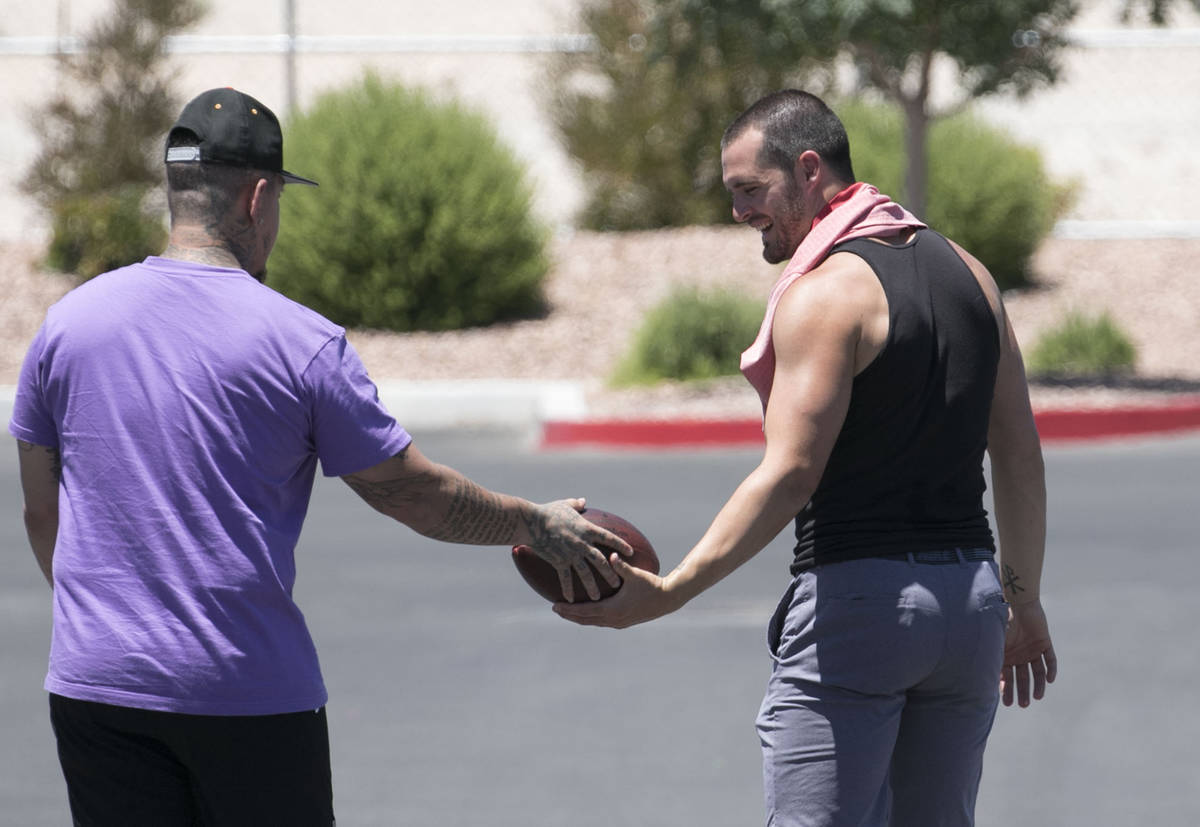 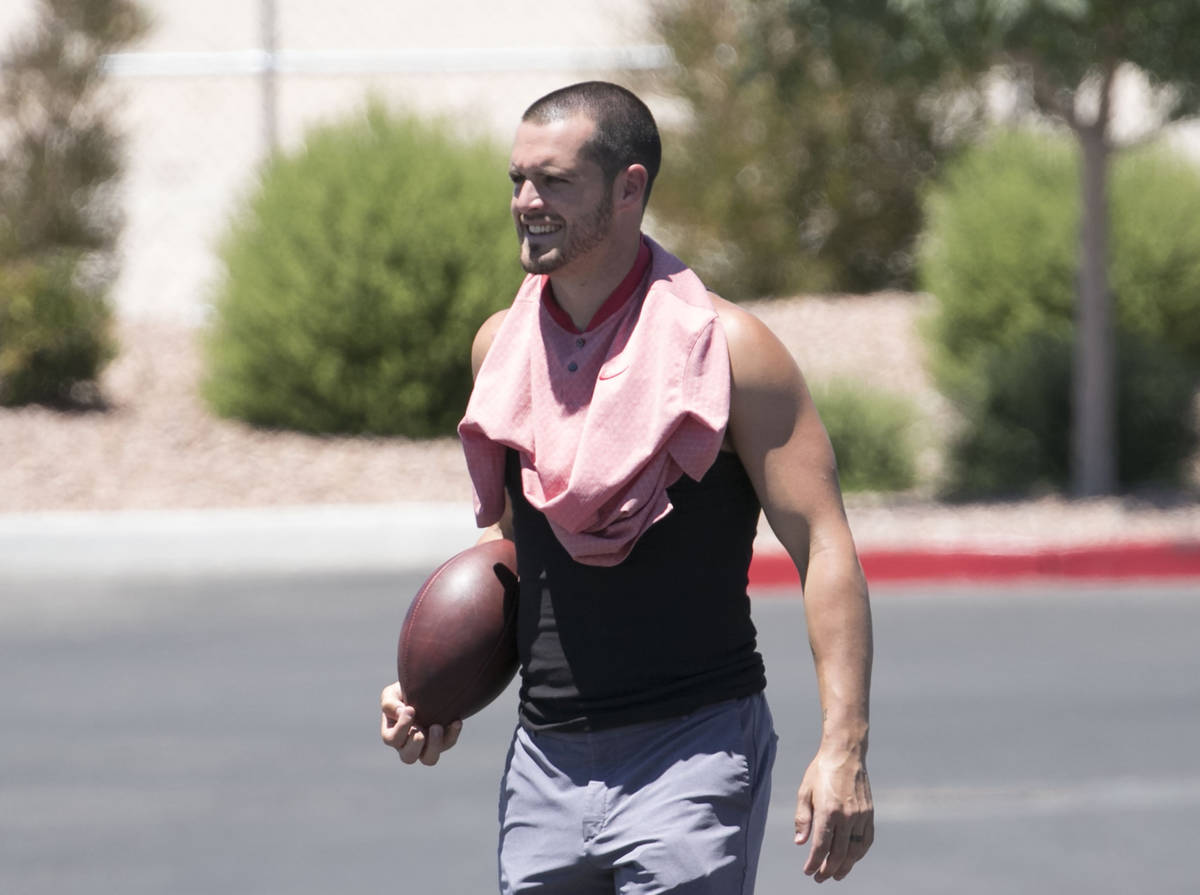 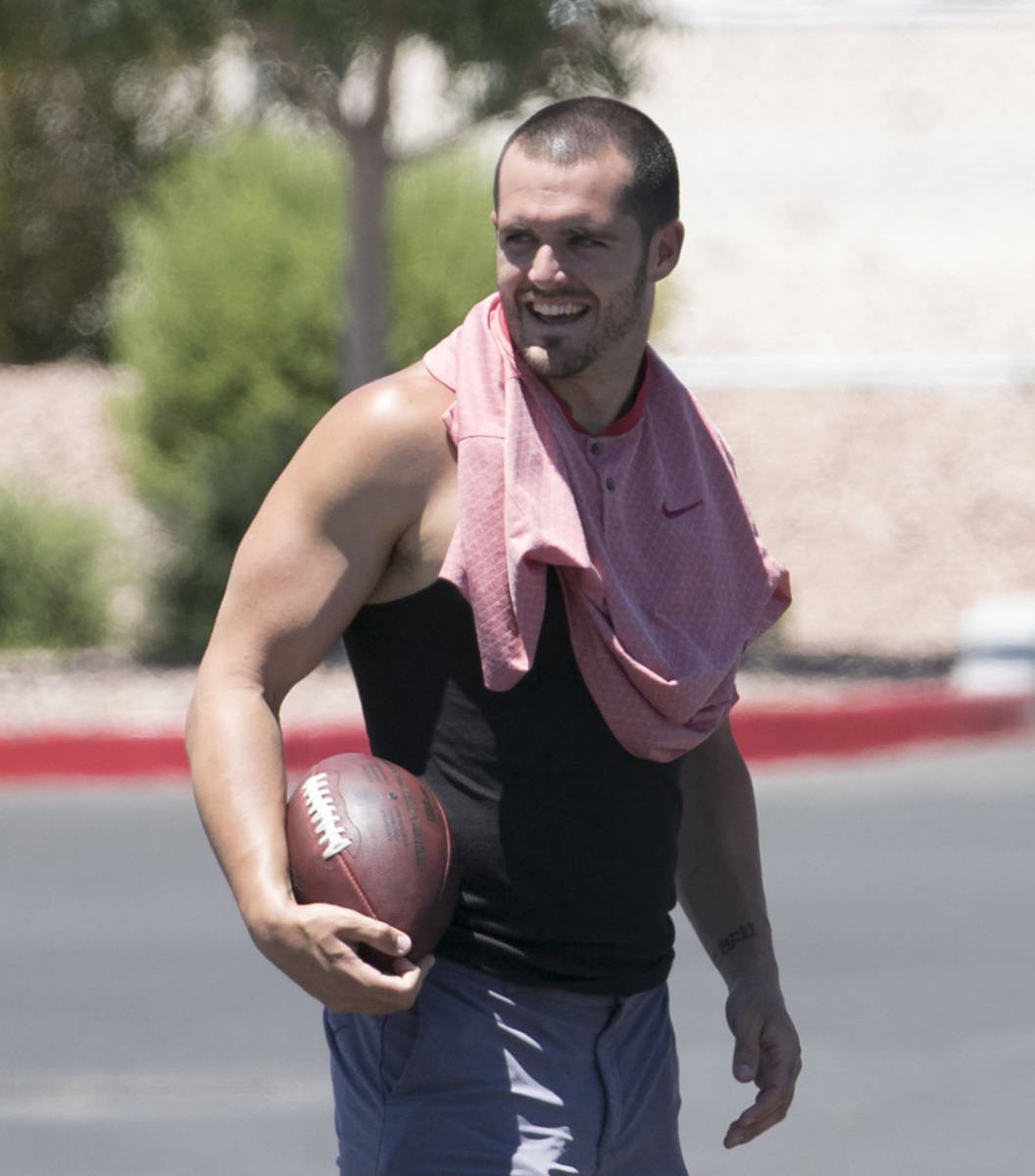 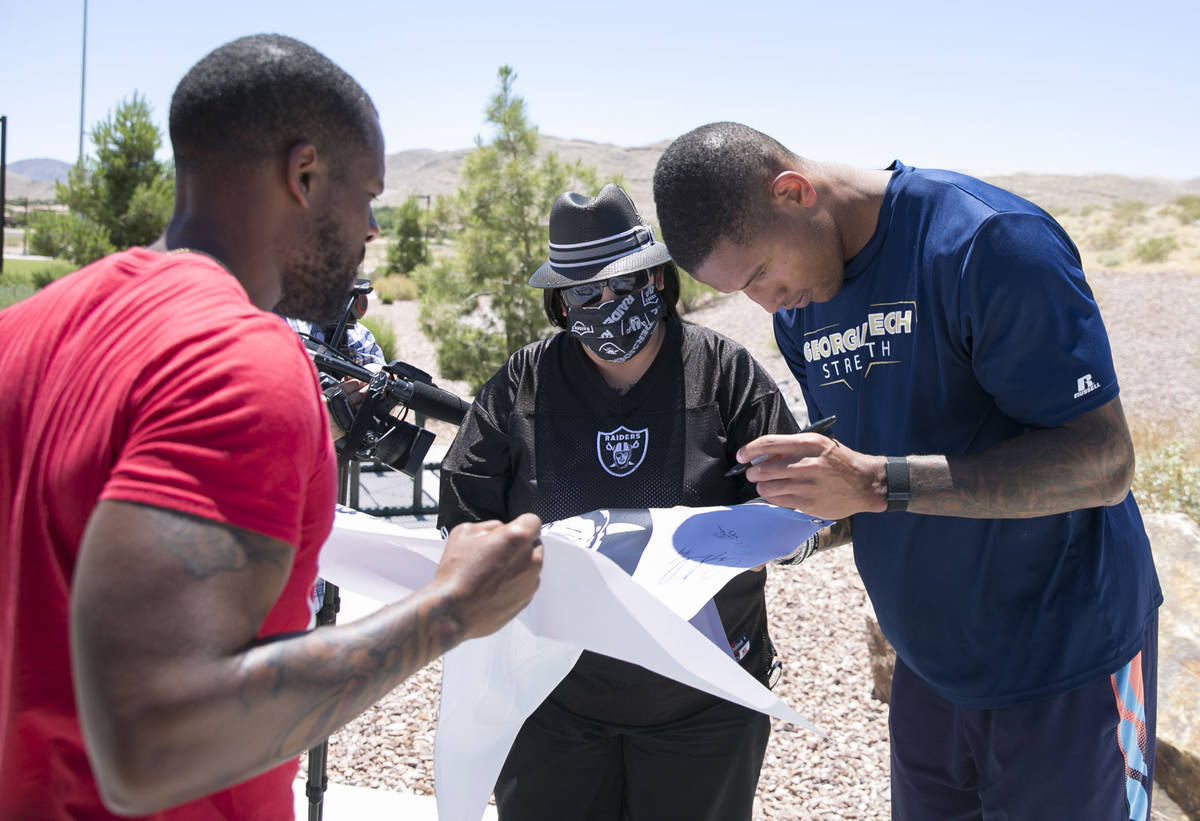 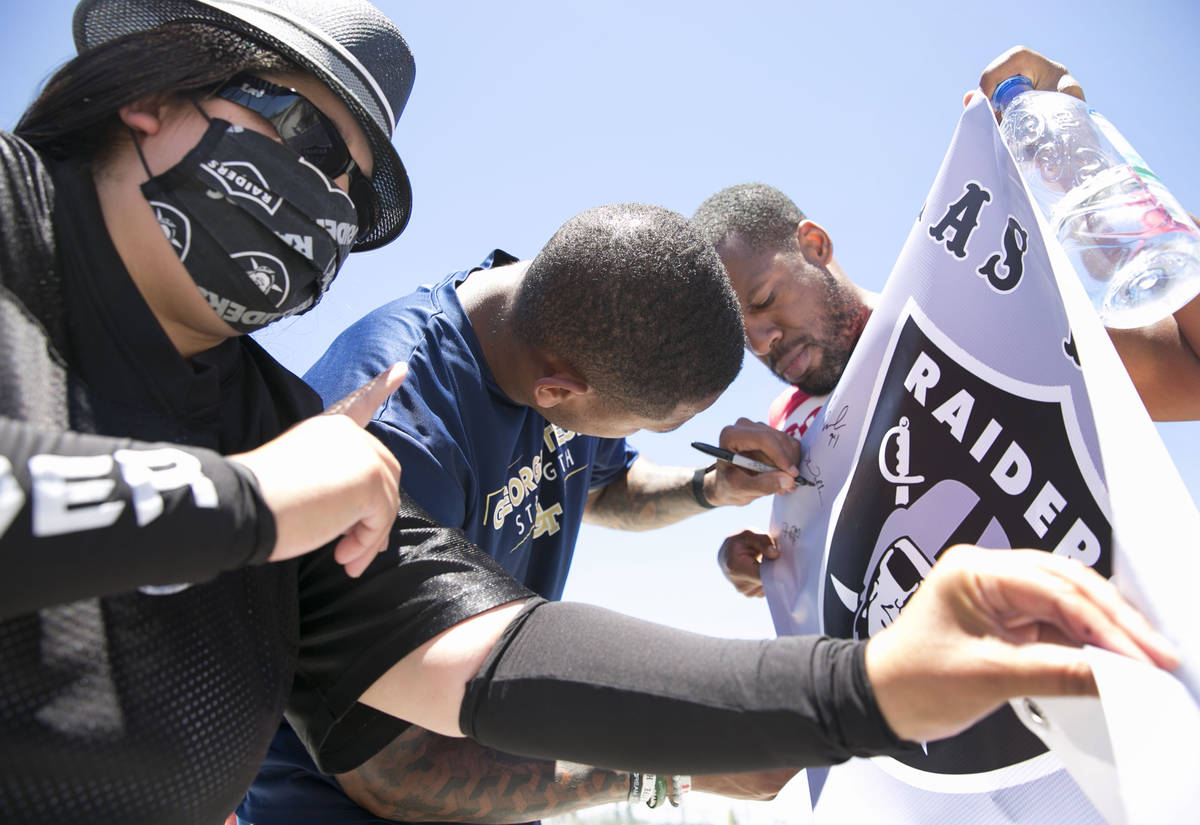 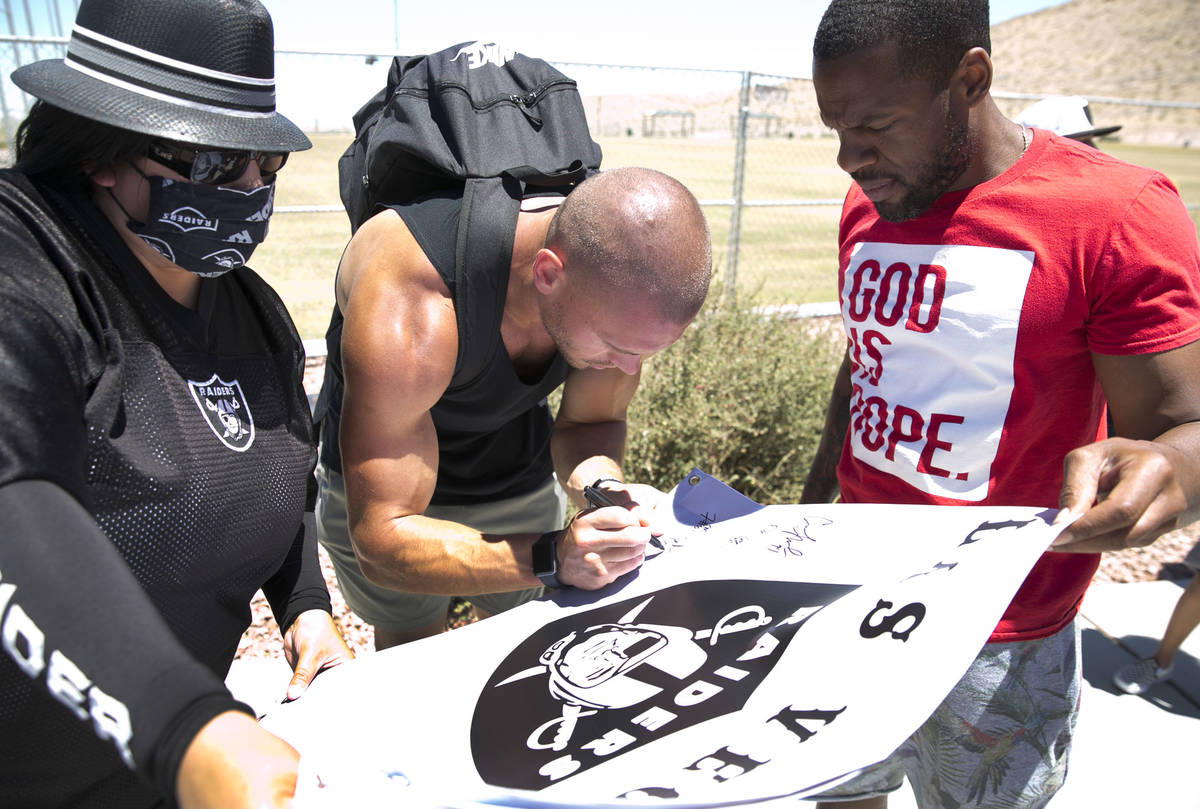 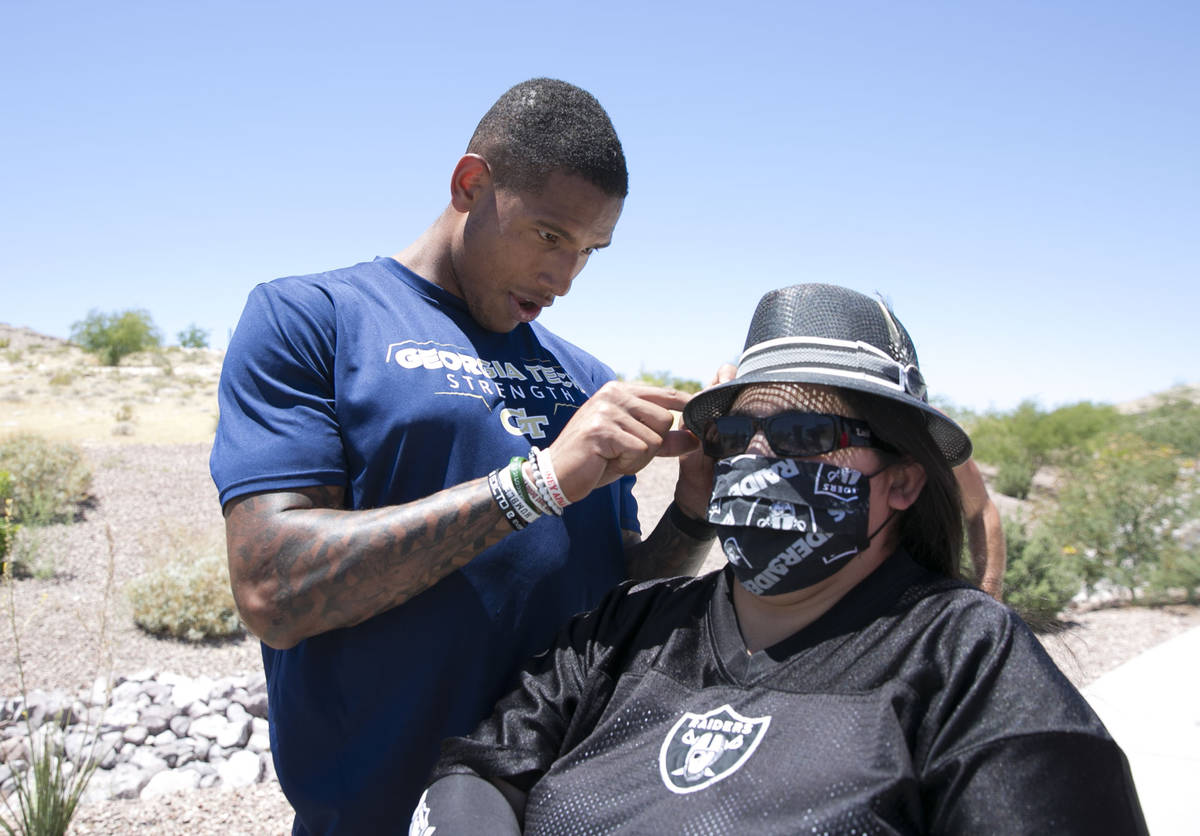 Seeing a group of people playing football at local park is not out of the ordinary. But when you see Derek Carr under center, you realize this is no ordinary gathering.

Carr and about two dozen of his Raiders teammates ran through plays Wednesday at a Southern Highlands park, with a small group of Silver and Black fans taking in the action.

“It’s epic to come see them practice,” lifelong Raiders fan Cynthia Ie said. “When the stadium opens now, I don’t have to fly to Oakland (to see them play).”

Players have been carrying out makeshift practices at the local park for a few weeks now, as Carr posted a video of a workout to his YouTube account two weeks ago that now has more than 135,ooo views.

Wednesday’s workout was a bit larger than the previous get-togethers as more Raiders players have been arriving in their new hometown, according to tight end Foster Moreau.

“A lot of guys are getting into town today, a lot of receivers are out here running a bunch of routes, just trying to get the timing down,” Moreau said. “It’s very important for us and we’re just enjoying each other’s company, trying to stay socially distanced and just working hard trying to win a championship.”

Ie has stopped by the park to watch the team run through plays several times over the past couple of weeks.

In addition to getting an up-close view of her favorite team, she’s used the opportunity to get many of the players’ autographs, including Moreau’s on her leather hat Wednesday.

“A lot of them have signed my stuff so far,” she said. “Carr, (Hunter) Renfrow just signed my jersey, my 13 jersey. He just signed that right now.”

Much has been made about the team practicing outdoors in Las Vegas, as triple-digit summer heat is a mainstay in Southern Nevada. But the team won’t have to worry much about that when it moves into its Henderson headquarters and practice facility later this summer. The Raiders have 1½ indoor fields in a climate-controlled atmosphere to practice in when they don’t want to brave the summer heat on the three outdoor fields.

That said, with the weather only hitting about 90 degrees when the team met up Wednesday, Moreau said it wasn’t so bad getting some plays in under the Las Vegas sun.

“It’s definitely nice weather today,” Moreau said. “Its more of a dry heat. I’m from Louisiana myself, but it’s nice. Blue skies, not much rain. We’re having a blast.”