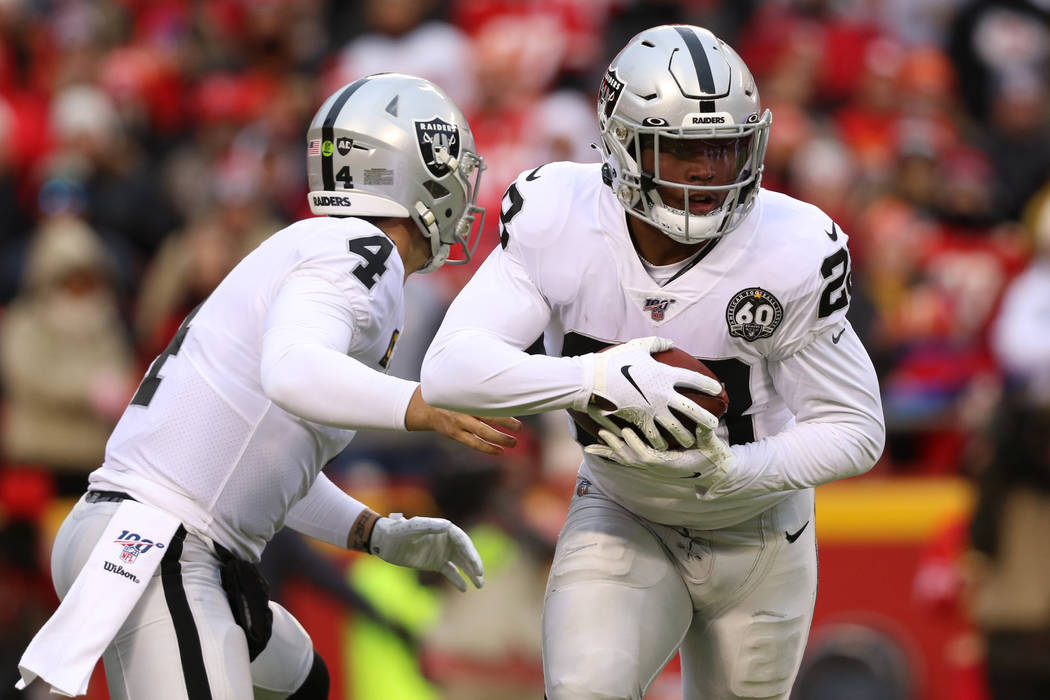 Oakland Raiders quarterback Derek Carr (4) hands off the football to running back Josh Jacobs (28) during the first half of an NFL game against the Kansas City Chiefs at Arrowhead Stadium in Kansas City, Mo., Sunday, Dec. 1, 2019. (Heidi Fang /Las Vegas Review-Journal) @HeidiFang

ALAMEDA, Calif. — Josh Jacobs has been playing with an injured shoulder since Week 7, but he won’t need surgery after the season.

That’s according to Jacobs himself, who stood at his locker and patiently answered questions about the injury and his potential readiness to face the Jaguars on Sunday after Friday’s practice.

Jacobs said since he’s been injured, his right shoulder usually takes until about Thursday to feel recovered enough for him to move around and practice. But that didn’t happen last week, which in turn led to him missing his first game as a pro.

“I feel like the biggest thing was just feeling like I let the team down, things like that,” Jacobs said. “Obviously, being a competitor you don’t like watching. But the running back group held it down, so at the end of the day I didn’t feel too bad about it.”

Last week, Jacobs revealed on social media that the shoulder has been fractured since that Green Bay loss. He said some told him that would put a target on him for opponents to go after the injured shoulder. But Jacobs said he didn’t care.

“I feel like there’s a target on my back every week,” Jacobs said. “It just is what it is.”

Jacobs noted it’s not the first time he’s gone through a season playing through injury. He said he played through his sophomore year at Alabama with a broken bone in his ankle, which he had surgery to repair two days after the national championship game. But that year, Jacobs wasn’t truly a feature back, taking 46 carries for 284 yards and making 14 receptions for 168 yards.

Despite missing last week’s game, Jacobs is No. 7 in yards rushing with 1,061 and seven touchdowns.