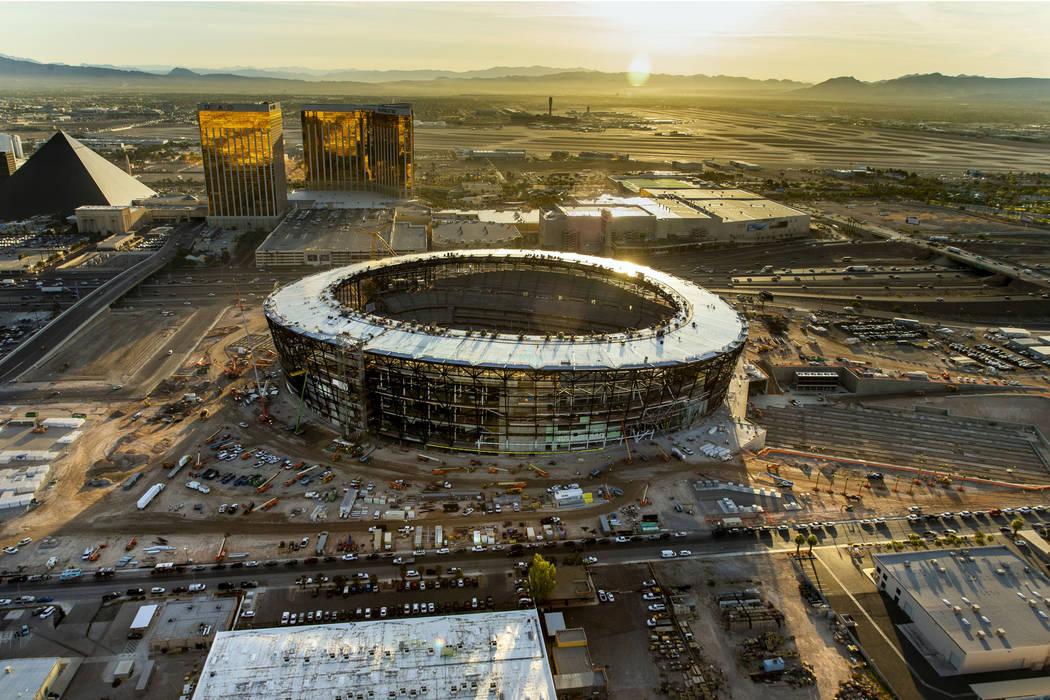 ALAMEDA, Calif. — Even if the Raiders somehow make the playoffs, the next time we see the Silver and Black in a regular-season home game they will be in Las Vegas. The NFL is already considering ways to celebrate the event.

Specifically, the league is trying to figure out how to best showcase the grand opening of Allegiant Stadium, the $1.84 billion, 65,000-seat home the Raiders and the state of Nevada are building.

Of all the scenarios being considered, people close to the situation indicate the most likely at this early stage could be the Raiders’ home opener filling the Sunday Night Football stage, with the Rams’ home opener at SoFi Stadium, the $5 billion, 72,000-seat stadium being built by Rams owner Stan Kroenke, opening the NFL season on the preceding Thursday night.

That would leave the Los Angeles Chargers, who will share SoFi Stadium with the Rams, to play in the nightcap of the season-opening Monday night doubleheader.

“Certainly (the NFL) will have to figure out how to get all three into prime time early in the season,” an unnamed high-ranking league official said.

The Thursday night NFL Kickoff Game has grown into an annual extravaganza that includes a pregame concert and other league-sponsored ceremonies and events. Since its inception in 2002, it’s mostly been used to honor the defending Super Bowl champions in their home opener while also celebrating the beginning of a new NFL season.

However, the league bucked that trend this year by commemorating its 100th season with the Chicago Bears hosting the Green Bay Packers at Soldier Field.

According to another high-ranking league official, the NFL has also considered the possibility of the Raiders and Allegiant Stadium hosting the Thursday night game.

“Nothing has been finalized yet,” that league official said. “We’ll see how it all shakes out after the Super Bowl.”

There are complications with the Thursday night scenarios for both the Raiders and Rams, according to those involved in the discussions. First, the 5:15 p.m. start time would mean either the Raiders or Rams would be kicking off for the first time in their new stadium smack in the middle of peak traffic.

That is on top of making accommodations for the pregame concert and festivities in and around the stadium.

On the other hand, Los Angeles and Las Vegas are uniquely qualified and experienced in putting together big-time events. With proper notice and planning, including information that alerts fans of all the various routes in and out of the stadium and parking options, the ingress and egress and logistical challenges could be mitigated.

If, as those high-ranking league officials indicate, the pecking order for the Thursday night game is the Rams, Raiders and Chargers, then mapping out an opening weekend in which all three teams celebrate their new homes on big stages should not be difficult.

That would likely mean the Rams hosting the Thursday night game against one of several attractive opponents they have on their 2020 home schedule. Among the Rams’ home opponents next season are the New York Giants, Dallas Cowboys, Chicago Bears and the New England Patriots.

Any one of those matchups would create a ratings bonanza. But the Cowboys in particular represent a home run on so many levels, considering their nationwide appeal and the powerful role their owner, Jerry Jones, played in Kroenke’s Inglewood stadium project winning out over the Raiders’ and Chargers’ stadium proposal in nearby Carson during the NFL’s race to return to Los Angeles.

A Rams versus Cowboys matchup on Thursday night makes a ton of sense, with the NFL officially celebrating its return to Los Angeles with an extravagant event produced by and fit for Hollywood.

That would likely mean the Raiders and Allegiant Stadium would get the attractive Sunday night slot.

With the NFL keenly aware of TV ratings implications, it would make sense for the Raiders’ opponent to be the New Orleans Saints, who have an exciting team, recognizable stars in Drew Brees, Michael Thomas and Alvin Kamara and a big following. Plus, the Saints playing in Sin City against the Raiders in prime time just feels right.

That would leave the Chargers, who could be slotted into the second game of the season-opening Monday Night Football doubleheader.

The 7:20 p.m. local kickoff would leave plenty of time for Los Angeles fans to get to Inglewood, even during rush hour, and the four days in between their home opener and the Rams is sufficient time for SoFi Stadium to make the switch over from the Rams home to one that represents the Chargers.

The late kickoff could make it impractical for an East Coast team to be the Chargers’ opponent. But certainly Patrick Mahomes and the Kansas City Chiefs would pull big-time ratings.