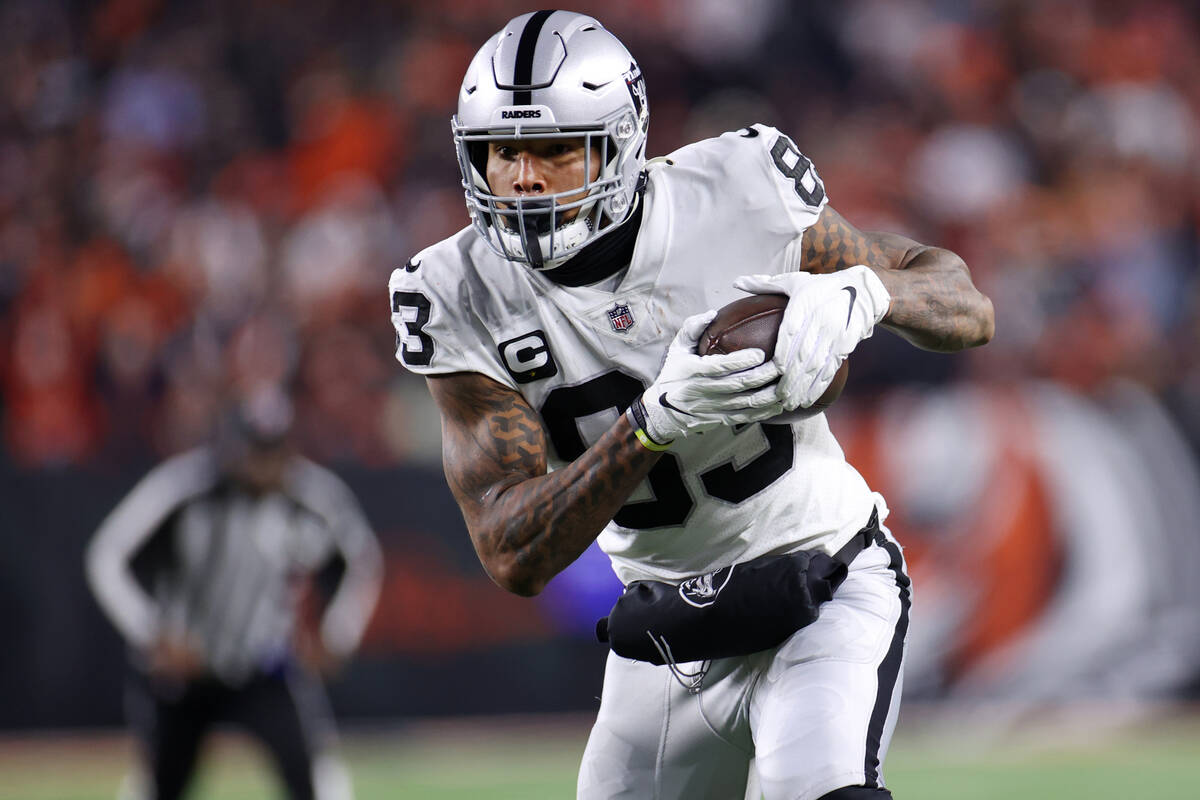 In this Jan. 15, 2022, file photo, Raiders tight end Darren Waller (83) makes a catch against the Cincinnati Bengals in the first half on an NFL playoff game at Paul Brown Stadium in Cincinnati, Ohio. (Erik Verduzco / Las Vegas Review-Journal)

Given his status as one of the most feared weapons in pro football, it stands to reason Darren Waller is one of the most coveted players in the NFL. And someone any team would be willing to pay a hefty price to acquire.

None of which escapes the Raiders, for whom he has been one of the brightest lights over the last three seasons.

And why, by the strongest of indications, they have no desire to part ways with him.

Knowing Waller’s value, it makes sense that the Green Bay Packers might have asked the Raiders to include him in last month’s blockbuster trade that sent wide receiver Davante Adams to Las Vegas.

It turns out the inclusion of Waller in a trade for a player with an unsigned franchise tag designation — which Adams was at the time — is against league rules. Such players can only be traded for draft picks, not another player. That rendered any demand by the Packers for Waller immediately moot.

Not that the Raiders would have obliged anyway.

In the bigger picture, though, it makes sense that teams would be interested in prying Waller away from the Raiders. After all, who wouldn’t want a 6-foot-6, walking, talking mismatch on their team?

As a result, a report by Aaron Nagler of Cheesehead TV that surfaced Monday indicating the Packers’ continued interest in trading for Waller should not come as a surprise. They likely aren’t the only team that has made overtures, either.

None of which is lost on the Raiders, who value Waller as much or not more than the other 31 teams in the league.

According to the report, the Packers and Raiders “have engaged in talks regarding a trade of Waller with an eye toward a deal getting done during this week’s NFL draft.”

While the Packers might covet Waller, the Raiders have no interest in moving him.

That is the case now more than ever given the tantalizing possibilities of a mega tandem of Waller and Adams putting opposing defenses in the position of having to decide which player to protect against knowing full well the other is liable to single-handedly slay them as a result.

That was part of the reason the Raiders traded for Adams in the first place.

In a league for which applying maximum pressure on opposing defenses is a vital component, the Raiders viewed a Waller/Adams combo as potentially the most lethal pairing in all of football.

Those two, playing alongside quarterback Derek Carr, slot receiver Hunter Renfrow and running back Josh Jacobs, have a chance to lift the Raiders’ offense into rarefied air.

It’s why the Raiders paid such a steep price to make it all happen in the first place.

After sending their first- and second-round draft picks to Green Bay to acquire Adams, it makes zero sense they would turn around and dismantle the very thing they just built by removing one of the key components.

That is the thought process inside Raiders headquarters. While history has proven you can never say never, the Raiders are much more eager to get a look at an offense that, on paper at least, looks as explosive as any in the NFL than they are in trading Waller to move up in the draft.

That isn’t to say the Raiders would never entertain the idea of dealing Waller. As he enters the last two years of the team-friendly contract he signed in 2019 — he is scheduled to make $6.8 million in 2021 and $7 million in 2022 — Waller is likely to ask for a new deal sooner rather than later. One that reflects his status as one of the three best tight ends in the NFL.

At that point, the Raiders will have to weigh all the usual dynamics involved in extending a player. If, for whatever reason, they decide Waller’s asking price doesn’t fit with their roster and salary cap plans, perhaps they become more receptive to trade offers.

But those decisions appear at least a year away. Meanwhile, Waller’s participation in the Raiders’ offseason program — including this week’s voluntary minicamp — isn’t reflective of a player ready to apply pressure to facilitate a new contract.

For now, he seems content with playing under the terms of his deal. Perhaps with an eye on initiating earnest contract talks next offseason.

All the more reason the Raiders have no interest in committing the type of unforced error it would be to entertain trade offers for their star tight end.